Inconsiderate Drivers of the Week: Episode 35 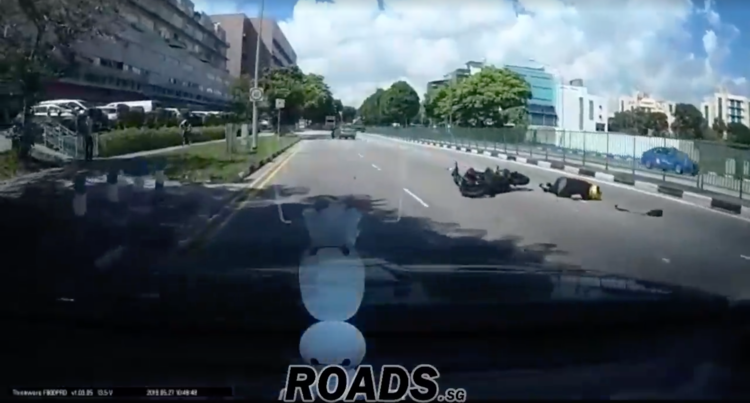 
In this episode of Inconsiderate Drivers of the Week, we feature a chain collision, a litterbug and a driver who seems unable to keep inside the turning pocket.

1) Motorcyclist Filters into Main Road Recklessly, Gets Sideswiped by Car

In this video, we can see pedestrians crossing at a left-hand turning junction. After it was clear to go, a motorcyclist to the right of the camera car briskly moves off and enters the main road. Suddenly, a car appears from the right at high speed and sideswipes the motorcycle.

Due to the impact, the motorcyclist falls off and the driver stops ahead, presumably to render assistance after the collision.

2) Chain Collision Occurs on the First Lane of an Expressway

When driving at high speeds on an expressway, it is highly advisable to maintain a safe distance from the car in front. This is to ensure you will have sufficient reaction time and braking distance to any impending danger ahead.

In this video, we can see a large flow on traffic on the ECP, especially on the first lane. For some reason, traffic begins to slow down and stop ahead, and drivers behind are responding in kind, slowing down and stopping, if necessary.

Suddenly, a red Mazda on the first lane approaching the built-up traffic is unable to slow in time and collides with a stationary taxi ahead. Because of the force of the collision, the taxi lunges forward and hits the black car in ahead.

It is unclear whether the car in front of the black car got hit, but it appears that at least three cars were involved in the chain collision.

3) Mercedes Taxi Driver Throws Litter out of a Moving Car

Littering while walking down the street is bad enough, littering by throwing it out of a moving car increases the danger tremendously. Litter being thrown out of a moving car can seriously harm a pedestrian or cause surrounding vehicles to swerve in an attempt to avoid it.

In this video, we can see a Mercedes taxi driver to the right lane, just in front of the camera car, in slow-moving traffic. Suddenly, the driver throws what looks like a plastic bag filled with items out the window into a hedge.

4) Audi Strays out of Turning Pocket, Car Has to Swerve to Avoid Hitting It

At most traffic junctions without a green light arrow, there are turning pockets in the junction. These turning pockets are meant for turning cars to wait in until it is safe to make a turn. They are also positioned in such a way that cars heading in the opposite direction won’t collide with the waiting cars.

In this video, the camera car is heading straight down a relatively empty road on the right lane. As the driver approaches a junction, an Audi is waiting to turn right on the opposite direction. But for some reason, the Audi driver is sitting slightly out of the box, thus leaving the camera car driver to swerve dangerously to avoid a collision.

Following the incident, a TP motorcyclist spots the incident, and proceeds to give chase to the Audi driver, who apparently drove off after the near-miss.

By law, motorcycles can only have two people on it, a rider and a pillion rider, and both of them have an approved helmet on. Also, pillion riders must be at least 10 years old.

In this video, a motorcycle is leaving a cluster of HDB blocks. On it, sit two young girls as pillion riders, one of whom was clearly under the minimum age of 10. Not only that, the two pillion riders were not wearing helmets.

In total, the motorcycle rider has violated three traffic rules and placed the lives of two young girls in danger.