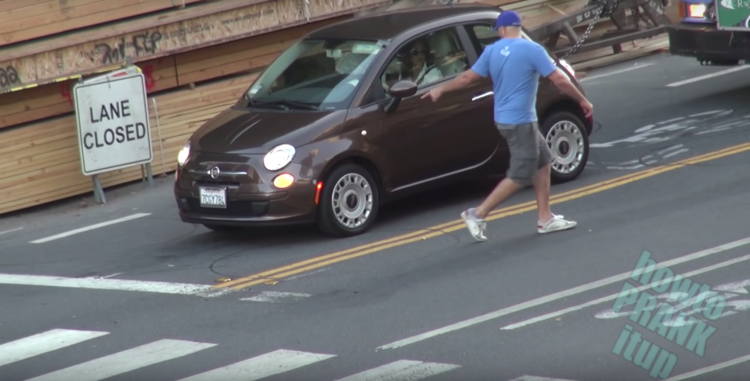 
With April Fools’ Day coming up, we thought we would share a couple of car-related pranks to pull on your car-owning friends and family!

In this list are five car-related pranks with varying levels of difficulty in logistics and execution. But not to worry, when executed properly, none of these pranks will cause any damage or bring harm to any person or car. However, we cannot guarantee that your relationship with the person you pranked won’t take a hit!

This is probably the simplest prank to carry out. All you really need is some good and convincing acting skills! All you have to do is cross the road in front of a stationary vehicle (preferably at a pedestrian or zebra crossing) and pretend to trip over or barely miss a box that is right in front of the car.

The trick is that it is an invisible box, a figment of your imagination. So, it is down to your acting skills to try and convince the driver that there really is a box on the road that they can’t see!

This prank does take quite a bit of effort, including a trip down to the shops for the bulk purchase of gift-wrapping paper and adhesive tape. But in terms of execution, you may need a couple of partner-in-crimes to carry out the prank efficiently!

All you need to do is carry out this prank is wrap an entire car in gift-wrapping paper. The team that did it in the video did put a little twist to it to the prank at the end, after the car owner finishes unwrapping their car. In the spirit of giving, the team left a little envelope of cash taped to the window for the owner.

So, all’s well that ends well for the pranked car’s owner!

Cars change hands all the time on the used car market. But, this prank takes things one step further by sticking ‘For Sale’ signs on cars that are not for sale. To add hilarity to the prank, you could write down a laughably small price for the car.

To add an extra layer to the prank, you could do what the prankster in the video did. He hung around the car, pretending to be on the phone, and waited for the owner to show up. After the owner notices the sign, he approached the owner and asked if the car is really for sale, and that he was having trouble getting through to the phone number on the sign.

But, this second part of the prank can only really work if you are pulling off this prank on strangers.

If you ever dinged or scratched a parked car, the courteous thing to do would be to leave a note on the windshield admitting guilt, and it should come with your phone number so that the driver can contact you. But when a piece of paper is stuck to someone’s car about a scratch that does not exist, sans a phone number or a specific location of the damage, it turns into a hilarious prank.

It would then leave the drivers to frantically search the exterior of their car, high and low, for the damage, as shown in the video. It would probably be good to own up to the prank after a few minutes, like the prankster in the video did, to avoid ruining the mood of the driver over a non-existent scratch somewhere on their car.

Since we are talking about car-related April Fools’ Day pranks, who could forget the one we pulled on our boss two years ago? In 2017, we decided to prank our boss, April Fools’ style, by simply taking a picture of his car and photoshopping a scratch mark on it. After that, we send the manipulated picture to him. He got freaked out and angry, making the prank even more sweet.

This prank does take a little more skill than the others, as you need a basic knowledge of Photoshop. But don’t forget, the better the photoshopping was, the more convinced the person pranked will be!

This video above was filmed and uploaded by us, onto our Motorist YouTube Channel. In case you didn’t already know, we have a YouTube Channel where we have posted a few entertainment videos like this. We also did a P-Plate Driving series that is perfect for all you beginner drivers. Do remember to subscribe to our channel if you like our videos!

We would like to finish off by saying that Motorist will not be held liable for anything that happens as a result of any of these pranks. So, try these pranks out at your own risk!

From all of us here at Motorist, we would like to wish you a happy April Fools’ Day! Enjoy yourselves and have fun!

Read more: The 8 Different Types of Car Enthusiasts in Singapore