Inconsiderate Drivers of the Week: Episode 27 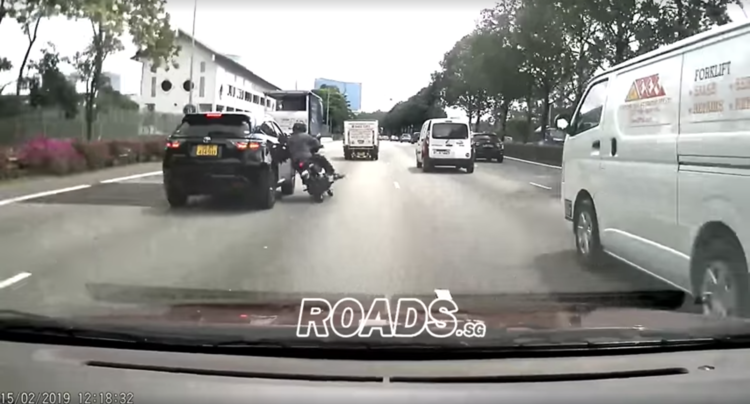 
In this episode of Inconsiderate Drivers of the Week, we feature motorcyclists encountering reckless drivers resulting in terrible consequences and a truck that almost ran down a cyclist at a traffic junction.

Before we change lanes on the road, it is especially important that we check for traffic in the next lanes and make sure it is safe before filtering out.

2) BMW Jam Brakes on PIE, Audi Swerves and Knocks down a Motorcyclist


When driving at high speeds in heavy traffic, motorists must pay extra attention to their surroundings, as one wrong move can set off a terrible chain of events.

This video shows the Eunos flyover on the PIE, an area known to be prone to accidents. The traffic is heavy but flowing, but for some reason, a BMW car jam brakes on the first lane. The car following behind, a white Audi swerves to the lane on the left to avoid a collision with BMW, but the driver did not check for motorcyclists behind.

A motorcyclist riding between lane one and two was unable to react and brake in time, and crashes into the Audi with considerable force. Luckily, the camera car’s driver, now behind the BMW, reacts in time and brakes hard to avoid a major collision with the BMW.

Whenever possible, cars should not jam brake amid heavy traffic with drivers following each other closely. For drivers in the same situation as the Audi, the safest bet is to stay in their lane and just brake as hard as they can. Swerving into another lane as the Audi driver did is highly discouraged as it could result in a worse situation than a single car nudging the back of another.

This video shows a truck at a traffic junction ready to go through a pedestrian crossing, despite the fact that there was a cyclist crossing. Luckily, the camera car’s driver honks for an extended period of time to warn the cyclist of the truck.

The video has no audio, but we can see after the video told us about the honking, the cyclist notices the truck and stops. The truck drives through, but thanks to the actions of the camera car’s driver, no one was injured due to the recklessness of the truck driver.


There is a good reason why we can only turn from turning lanes, safety. If we were able to turn from any lane we wanted, our roads would be chaotic mess filled with people turning left with the right-most lanes.

This video shows a black BMW 7-Series driver turning into a side road from the main road. The catch? The driver did it from the second lane on a road with four lanes. The camera car on the third lane had to jam brake to avoid crashing into the BMW. Due to the wide turn, a cyclist had to move off the road and up to the pavement to allow the BMW to enter the side road.

On top of that, some investigation revealed that the BMW driver allegedly did not renew his or her road tax on the car, which is an offence.

5) Honda Driver Goes on the Wrong Side of the Road


Taking for granted road sign and markings and not paying attention to them while driving can lead to bad consequences, as we can see here with this driver.

In this video, we can see a Honda Civic driver that somehow managed to end up on the wrong side of the road. As a result, the Honda driver holds up traffic as he or she tries to turn into a turnoff. Unfortunately, it wasn’t as easy as it sounded as the driver had to make a three-point turn to go into the turnoff.

Luckily, the driver realised their mistake early without causing any accidents and tried to correct their mistake before things went from bad to worse.