Inconsiderate Drivers of the Week: Episode 26 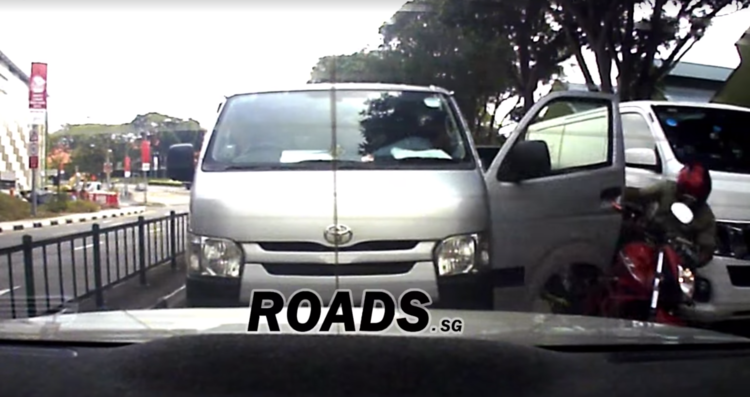 
In this episode of Inconsiderate Drivers of the Week, we feature more motorcyclists getting into trouble, a van without auto locks on the door and a Mercedes driver jumping a red light.

1) Motorcyclist Makes Right Turn Without Caution, Gets Knocked down by Volkswagen Driver

Whenever making a right turn at a traffic junction when traffic is still flowing on the opposite side of the road, the onus is on the turning motorist to exercise caution and good judgement to gauge when it is safe to turn.

2) Van Passenger Doors a Motorcyclist at a Traffic Junction


With all the talk about auto locks on car doors making the rounds on social media, it’s timely to see an example of why auto locks are on vehicles in the first place. Also, it’s worth reminding drivers and passengers why you shouldn’t open the door when you are not on the first lane, next to the kerb.

This video from a rear camera shows a van coming to a stop at a traffic junction. To the immediate left of the van, in between both lanes, a motorcyclist proceeds through the queue at the junction. Suddenly, just when the motorcyclist is passing the van, the passenger opens the door.

The motorcyclist is unable to brake in time, and he crashes into the door, causing him to fall off his bike. Regardless of the van passenger’s reason for getting off the van, which was on the second lane, he should have, at the very least, check if there were any motorcycles approaching before opening the door.


Jumping the red light seems to be an offence that many drivers in Singapore don’t mind making. This is despite the fact it could cost them a fine and 12 demerit points, not to mention also endangering their own lives and those of others on the roads.

This video shows a Mercedes driver at a traffic junction on a lane allowing motorists to both go straight and turn right. After the traffic light turned red, only motorists turning right were allowed to go thanks to the green arrow. But the Mercedes driver decides to go straight ahead, ignoring the red light that appeared before the driver went off.

Just as the Mercedes driver was crossing the junction, he or she comes in the path of a van driver from the opposite side turning right. Both drivers could not react in time, and the van knocks the Mercedes relatively lightly, as both vehicles were not going at a high speed.

4) Motorcyclist Rushes out of a Turning, Gets Hit by Toyota Prius


When using a small lane to turn into the main road, it is on the turning drivers to check for approaching vehicle, and to only inch out and turn when it is safe.

This video shows a small lane turning into the opposite side of the road or straight through to go right. A motorcycle enters the turnoff on the camera car’s left side without stopping before the double white dotted line. There was a Toyota Prius on the right lane that could not stop in time.

The Prius driver hits the motorcycle with considerable force that threw the motorcyclist off his bike and damaged the front bumper of the car. Such accidents could be avoided if the motorcyclist stopped before the line and checked for traffic before moving out.

5) Cyclist Crosses Road During Red Man, Gets Knocked down by Toyota Sienta

This video shows a blue Toyota Sienta to the left of the camera car driving along a road, stopping briefly at a red traffic light. Not soon after, the lights turned green, giving the vehicles right of way. However, a cyclist appears from the right and speeds across the road.

The camera car reacts in time and brakes, but the Sienta driver did not, knocking down the cyclist with considerable force. Luckily, the cyclist is able to get up on his own, and he does not appear to have sustained major injuries.

Abby
hopefully people will learn from these mistakes! :
Like Reply