Higher Fines for Motorists, Pedestrians and Cyclists Among Reviews to Traffic Laws 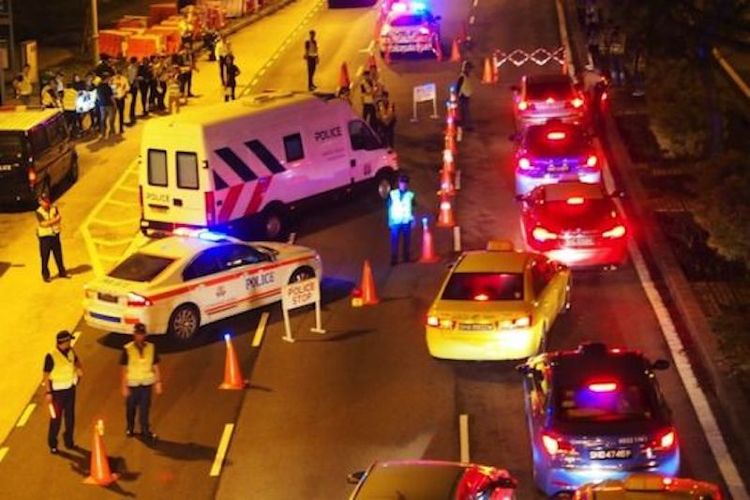 On Thursday (21 Feb), MHA announced a set of changes to the Road Traffic Act. Under these changes, motorists, pedestrians and cyclists found guilty of traffic offences will get bigger fines.

Starting from April 1 2019, in an attempt to strengthen deterrence against irresponsible driving, the MHA will increase fines for road traffic. In its press release, MHA said increasing fines would ensure that they remain an effective deterrent against the recent increase in road traffic offences.

MHA said, “it is important to nip unsafe driving in the bud, before serious accidents happen and people are killed or hurt,” adding that, “For road traffic offences that do not involve egregious driving behaviour and do not result in harm caused to others, the offence may be compounded, in lieu of prosecution.” 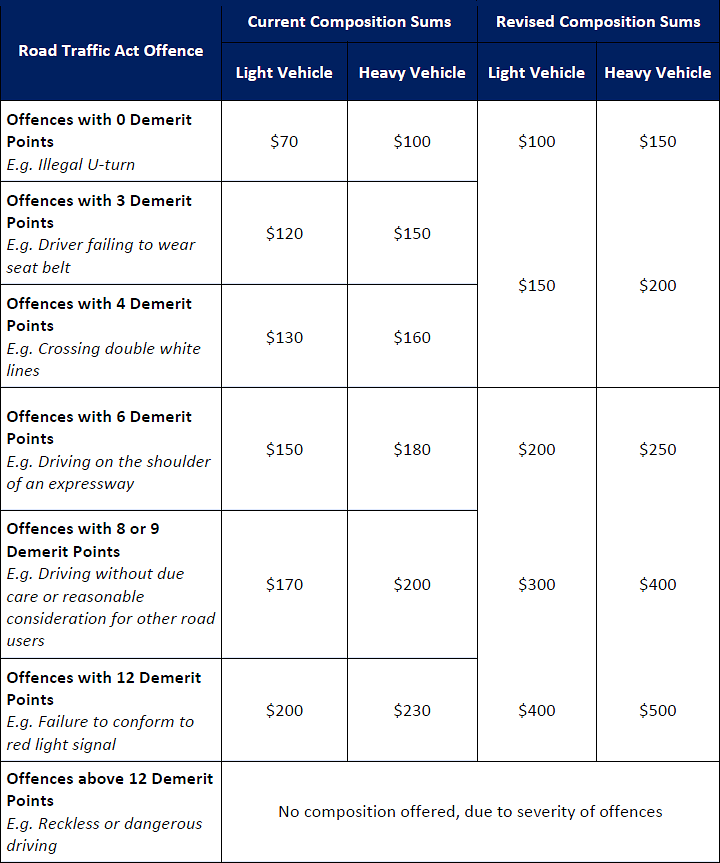 Above is a list of offences under the Road Traffic Act in which fines were revised and increased. The biggest jump in fines were in offences above 12 demerit offences, which are for instances, not stopping at a red light.

Fines for offences involving heavy vehicle drivers went up more than offences committed by drivers of light vehicles, as MHA pointed out, “heavy vehicles are more likely to cause death or serious injury when they are involved in accidents.”

It was in 2000, 19 years ago, when the fines for motorist road traffic offences were last reviewed.

MHA also looked at fines for offending pedestrians and cyclists, which they are increasing, for the first time in over two decades. 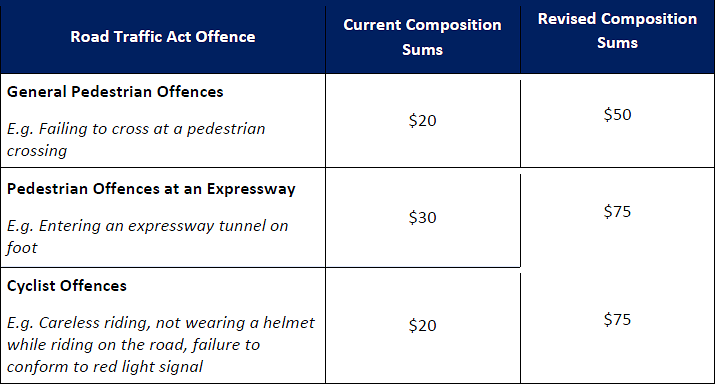 For pedestrians committing general offences such as jaywalking, the fines will increase by S$30 to $50. Other more serious offences such as walking into an expressway tunnel may result in a fine of $75, up from the previous fine of $30.

For offences related to cyclists, careless riding, not wearing a helmet while riding on the road or failing to stop at a red light may also result in a $75 fine, an increase of $55 previously.

Separately, MHA also announced a set of proposed changes to the Road Traffic Act. Under these changes, motorists found guilty of major traffic infractions will get tougher penalties. These harsher punishments include longer jail sentences and bigger fines.


Speaking about these measures, the Ministry of Home Affairs (MHA) said such punishments are, “for serious offences where the motorist exhibits egregious driving behaviour and causes serious harm to the victim.”

Some offences cited by MHA include drink-driving and speeding through pedestrian crossings when they have the right of way. MHA also proposed two new classes of irresponsible driving offences, namely Dangerous Driving and Careless Driving. These two offences will be further split into four tiers, depending on the severity of harm caused.

An example would be dangerous driving. The maximum jail sentence for it could go up to eight years from five. A minimum one-year jail term will be enforced if death or grievous hurt is caused as a direct result of the dangerous driving.

For careless driving, the maximum jail sentence will go up to three years from two, if the careless driving causes death. Minimum compulsory punishments will also be enforced.

Speaking at the launch of a road safety campaign on Thursday, Senior Parliamentary Secretary for Home Affairs Sun Xueling said, “Despite our enforcement and education, there are still motorists who drive or ride in a dangerous manner – against the flow of traffic, swerving across lanes suddenly without warning and beating red lights.”

MHA’s press release went on to state that penalties may be doubled for repeat offenders. It added that if the convicted motorist was under the influence of alcohol or drugs, the offender could have penalties added on that may result in up to two more years in jail. An additional penalty of a minimum additional year in jail will be included if there was death or grievous hurt. Repeat offenders will get double the punishment. 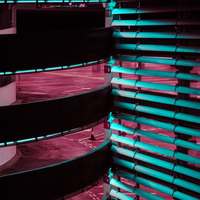