Inconsiderate Drivers of the Week: Episode 23 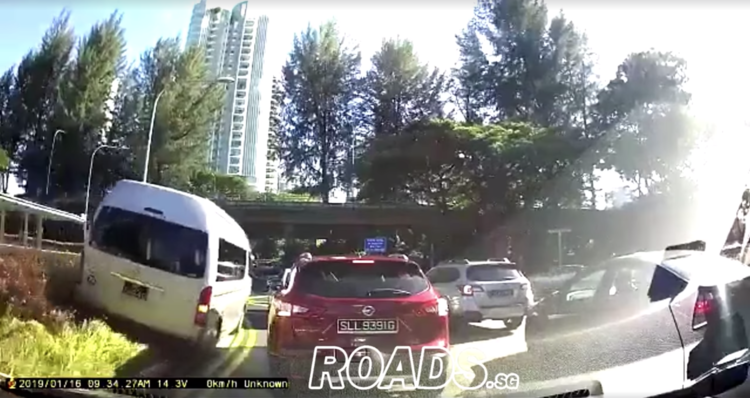 
In this episode of Inconsiderate Drivers of the Week, we feature a disgruntled and petty Nissan GTR driver, a minibus mounting the kerb on purpose and a reckless taxi driver.

Petty drivers are everywhere on the roads, from those who refuse to give way to those who hog lanes and tailgate. But those are just minor actions. There are also those who take their pettiness to the extreme, endangering their own lives and the lives of others.

In this video, we can see a Nissan GTR speeding recklessly on crowded roads at night. But the GTR driver takes it one step further by delibrately cutting into the lane of the camera car and stopping in the middle of the road for no good reason. It goes on for a few minutes, down a few different streets just off Orchard Road.

Many netizens who watched the video pointed out that such actions by the Nissan GTR driver were reckless and petty. But from the video, it appears that the GTR driver was directing his petty actions specifically at the camera car, and no one else. This fact led to many speculating that there was an earlier incident of sorts between two parties.

Regardless of what happened prior, the GTR driver should not have engaged in such reckless driving that could have easily resulted in an accident.


Traffic lights exist on roads for good reasons, to regulate traffic flow and to ensure the safety of vehicles coming from multiple directions. Jumping a red light may save you a minute or so in your journey, but the repercussions and penalties could be massive.

In this video, we can see a traffic junction, with the traffic light in front just turning green. Just as the vehicles are moving off, a van suddenly appears from the right side, speeding past the red light. The van driver barely missed a motorcyclist who had to take evasive actions to avoid the van who jumped the red light.

3) Minibus Driver Drives up the Kerb to Avoid Traffic


No driver likes getting stuck in heavy traffic, but in Singapore, it’s everywhere, so what we all should do is to fall in line and wait our turn to move. What we shouldn’t do is what this minibus driver did at the infamously congested Newton Circus roundabout.

In this video, we can see a built up of cars waiting to enter the Newton Circus roundabout. To the left of the road is a kerb with some plants and shrubs. A minibus driver appears to be uninterested in queuing up, and decides to jump the queue by driving half the minibus up the kerb to avoid the lane.

Some netizens are claiming that the minibus in the video was a Grab minibus. Well, if that is true and there were any passengers on board, one could only imagine what they must have thought when the bus started tilting heavily to the right. If not then, the driver must have been in a real rush to pick a group of people up.


Many people post up dash camera footage on social media sites hoping to garner public support and/or sympathy on their side. But sometimes, they do it without realising that they are the ones in the wrong in the recorded incident. This is one such example.

In this video, we can see the camera vehicle was at a traffic junction, waiting for an opportunity to turn right. When the driver finally decides to turn right, he didn’t realise that there was a cyclist on the road coming from the opposite direction, going straight.

Both parties managed to stop in time, but an argument ensues between both of them about whose fault it was. From what we could see, we think that the cyclist technically had right of way, and the driver should have waited for the cyclist to pass him before turning.


Let’s admit it, we all at same point approached a yellow light and accelerated because we didn’t have enough time to slow down and stop. Clearly, there is a grey area surrounding what to do when approaching a yellow traffic light.

Some would say that we should stop and not risk it, while others say stopping suddenly while driving quickly is even more dangerous. Doing the latter would run the risk of stopping past the line and the following car not being able to react and brake in time. However, there are no grey areas with regards to the actions of this TransCab driver.

In the video, we can see the camera car slowing down and stopping at a T-junction with the traffic light just changing from yellow to red. But, a TransCab taxi suddenly appears to the right of the camera car and turns right. That would have been forgivable under normal circumstances, with the traffic light just turning red and that the taxi driver might not have had enough time to stop.

The only catch is, as the video shows us by showing the footage from the rear camera prior to the incident, the taxi driver went on the wrong side of the road. The driver was reckless and impatient, risking an accident with anyone who could have been turning into the lane from the other direction.

Adrian Lee
not sure if they're reckless of just stupid..
Like Reply