Inconsiderate Drivers of the Week: Episode 21 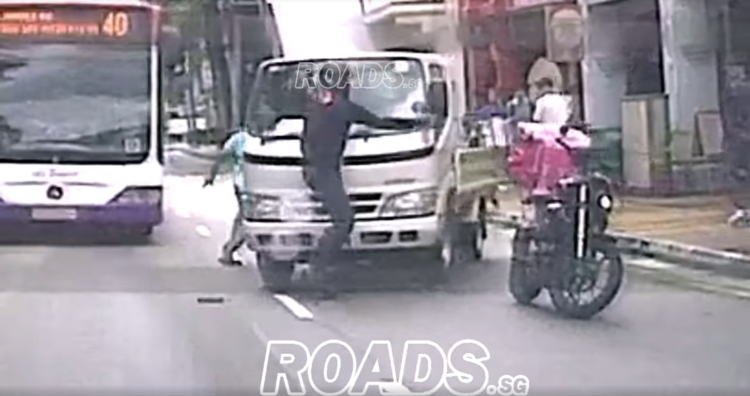 
In the first episode of Inconsiderate Drivers of the Week for 2019, we feature more road raging against lorry drivers, a Toyota driver deliberately braking to harm a motorcyclist, and a car and taxi driver engaging in dangerous driving.

The cycle of road rage appears to have continued into 2019, with the theme appearing to be centred around small vehicles like bicycles and motorcycles, and lorries.

In the video, we see a lorry and two motorcycles that have stopped along the road. The two motorcyclists appear to be in a heated exchange with the lorry drivers with the driver side door of the lorry open. Suddenly, the motorcyclist in black slams the door and kicks off the lorry’s driver-side rear view mirror.

The lorry driver responds by trying to run the offending motorcyclist down. The motorcyclist reacted quickly and escaped without any injuries, and the lorry stops after hitting one of the stationery motorcycles.

2) Toyota Driver Plays Braking Game with Motorcyclist, Causing Him to Crash into the Car


There are plenty of things that we shouldn’t do with our car, and playing the braking game with other motorists is one of the many big no-nos. The video starts a traffic junction when the light was red. A motorcyclist is seen to be having a verbal exchange with the Toyota driver directly in front of the camera car.


Nothing good comes out of speeding and driving dangerously, especially when it is night-time and there are other motorists on the road. But neither is it a good idea to try and take matters into your hand when dealing with such errant road users.

While the style of driving the camera car driver was engaged in prior to the encounter with the Taxi was legally questionable, the Taxi driver should not have tried to obstruct the camera car. It was an indeed a form of road raging and dangerous driving, which could have easily ended badly for both of them, and indeed other motorists around them.


The vehicles we drive on the road are all equipped with rear-view mirrors. It is not there to increase aerodynamic drag or make your vehicle look like it has ears, it is an essential safety tool you are supposed to use to keep a look out for approaching vehicles from either side behind you.

In this video, we see a Van approaching a traffic junction in the middle lane amid heavy traffic. The driver then decides to abruptly change to the right lane without signalling, or apparently, checking the rear-view mirror.

In the act of changing lanes, the Van clips the left-front side of a silver Hyundai i30 that could not brake in time as the driver was too close to the Van when it changed lane. Despite causing a minor accident that nudged another car slightly, the Van didn’t stop and continued to drive on. After the accident, the Hyundai driver was seen following the Van into a side street.


At most traffic junctions, cars are allowed to turn right while traffic is still flowing from the opposite direction. It is ultimately down to the driver turning right to exercise and good judgement to decide when it is safe to turn right.

The Toyota driver was seen braking hard in the video, but the Toyota didn’t stop in time and had a minor collision with the Taxi. Luckily, the Toyota driver reacted quickly and braked early, and that he or she did not swerve to the left lane, into the path of the camera car. If anything was different as compared to the scenario above, the repercussions could have been much worse.