Inconsiderate Drivers of the Week: Episode 20 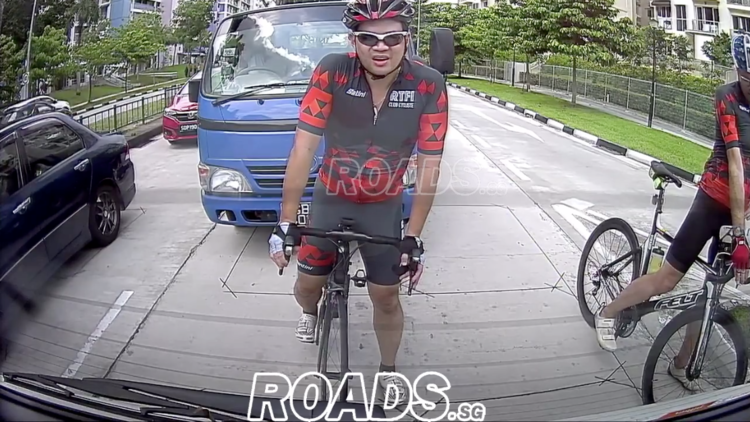 In this holiday episode of Inconsiderate Drivers of the Week, we feature the infamous road raging cyclist, an Audi getting caught in another car’s wheel well and a drunk driver.


1) Road Rage Between a Cyclist and a Lorry Driver


The war between motorists and cyclists on our roads seem to be never-ending. Now, it has been amplified during this holiday season over a recorded altercation between a cyclist and a lorry driver. In the video, we see two cyclists, one of which was cycling in the middle of the left lane, effectively hogging it and blocking the lorry and subsequent traffic behind.

Reportedly, the road rage occurred because the lorry driver honked twice at the cyclist in question. Netizens were quick to express their outrage at both parties, but the majority of support has appeared to have been thrown behind the lorry driver, condemning the cyclist’s actions. The cyclist has reportedly sustained no major injuries.

The general consensus appears to be that rules on drivers and cyclists sharing the roads need to be better defined. Investigations are ongoing, and reportedly, both parties have been arrested by the police.

2) Audi Clips a Kia, Gets Caught in Its Wheel Well and Causing the Kia to Spin


The video above shows a Kia and Audi entering an expressway, with the Kia in front. The two cars travel on a disappearing merging lane, and the Audi filters out to the left lane first. When the Kia tries to do the same, the Audi clips the rear tyre on the Kia. The momentum forces the Audi’s wheel into the wheel well on the Kia, sending the front of the Audi upward.


During this holiday season, it’s indeed the time to loosen up and party with your friends and family. But we cannot emphasise enough, please do not drink and drive, don’t be a danger to yourself and others on the road when you had a few too many.

The rear camera video from a van shows a relatively quiet expressway when the sky was dark. Suddenly, the video shows a Mercedes approaching, changing lanes from the left at an extremely high speed.

The Mercedes driver then hits the rear of the van before both vehicles begin to swerve under hard braking and coming to a stop on the right lane. It was later reported that the Mercedes driver was arresting for drink-driving.

This serves as a reminder to all motorists to not drink and drive. You would have plenty of options if you had a few too many, from leaving your car and take a taxi or private-hire car home, to hiring a valet to drive you and your car home. Also remember, if you don’t drive to drink, you won’t drink and drive.


While turning right at a traffic junction while oncoming traffic is flowing freely, it is down to the drivers to exercise good judgement when attempting to turn. The turning drivers must give way to oncoming traffic and turn at their own discretion when it is safe to. For those passing the junctions, they should also approach at a steady speed and not drive too fast.

The video shows vehicles at a T-junction turning right while traffic continues to flow on the opposite side. As a Toyota car is in the middle of turning, a Mercedes taxi going at high speed appears and hits the left side of the Toyota with considerable force. The Toyota then spins, goes up the curb, nearly misses the traffic light pole and comes to a stop by lightly hitting the camera car.

It is unclear if anyone was seriously injured, but that Foodpanda delivery rider was incredibly lucky, and oddly calm when a major accident happened right next to him. The same can’t be said for the lady in the camera car, though.


We all have done it, or at the very least, seen someone dash across the road when the green man is blinking. Most of the time, we are on the other side before the lights turn green and the cars are allowed to go. This was not the case for this cyclist.

The video shows the camera car approaching a red traffic light. As the light went green, the vehicles started to move off. However, there is a cyclist that was still crossing the road. The Malaysian car on the second lane stops in time, but the Honda driver on the left lane couldn’t react in time, and neither could the cyclist.

The cyclist hits the side of the Honda before the driver could avoid him. Luckily, the impact was not great, and the cyclist appears to be okay. A quick check revealed that pedestrians need to cross eight lanes in total at this junction to get to either side. The cyclist should not have risked his life by crossing without enough time to get to the other side before the light turned green.