Inconsiderate Drivers of the Week: Episode 19 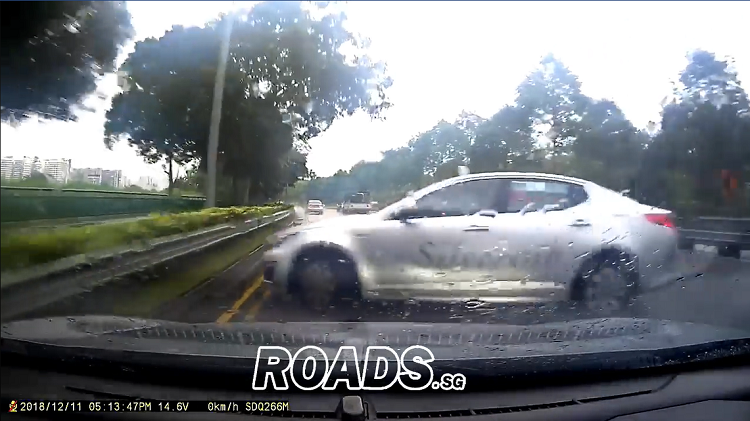 
This week’s episode of Inconsiderate Drivers of the Week features several reckless motorists. We also see what happens when you speed on a wet road.

1) Yellow Porsche Changes Lane Without Checking for Other Vehicles

Does signalling give you the right of way? The driver of the yellow Porsche in this video probably answered “yes”. In the video, we see the Porsche travelling on the right-most lane along the PIE. At around the 0:20 mark, we see the driver signal and switch lanes without waiting for the white car in the adjacent lane to give way. Due to this, the white car driver had to take evasion action to avoid an accident. As for the Porsche, the driver continued to lane switch again without a care of other motorists on the road.

Don’t you just hate it when you run into impatient drivers on the road? For making them wait a few added seconds, you become a victim of their high-beams, horns, and tail-gating. In this video, a Nissan van driver can be seen bullying the cam owner to complete a right-turn. The van flashed his high beam several, before overtaking the cam owner in the wrong lane. However, other vehicles were still completing their left-turn from the opposite lane. Therefore, the van driver had to wait at a precarious spot in the middle of the road. If traffic on the road were heavy, the van driver would have definitely inconvenienced other road users.

Here’s another example of why you should never attempt to beat a red light. Captured along Orchard Road, we see a motorcyclist running a red light at a 4-way intersection. The biker was probably distracted by the Christmas lights, and had failed to pay attention to the traffic lights. Regardless, he sped through the intersection and eventually collided with a white car. By the looks of it, the white car driver waited about two seconds before driving off after the light turned. Based on the driver’s reaction, he was also caught off-guard by the motorcyclist. Thankfully, the motorcyclist appeared to be unharmed at the end of the video.

Another case of “I’ve signalled, so give way to me”. In this instance, a maroon SUV attempted to travel straight on a right-turn only lane. Unfortunately, a turning bus halted the driver’s intentions. In all fairness, the bus driver probably didn’t that the maroon SUV wanted to travel straight. As for the SUV, he should have completed the turn, even if he intended to drive straight. Remember, Singapore isn’t that big—there will definitely be other opportunities to make a U-turn.

5) Silvercab Hydroplanes on Wet Road, Spins Out of Control

If you’re driving in wet conditions, remember to drive slower than usual. If not, something like this might happen to you. According to this video’s description, the Silvercab wanted to overtake the cam owner, who was travelling on the innermost lane. The cab driver swerved to the right but lost control of his vehicle, probably due to hydroplaning. This caused the cab to spin out of control. It only came to a complete stop after hitting the curb and guardrail. Thankfully, the road wasn’t busy, or else it might have ended disastrously. Abigail
can't stress how important it is to be alert when driving.. ?
Like Reply