Inconsiderate Drivers of the Week: Episode 15 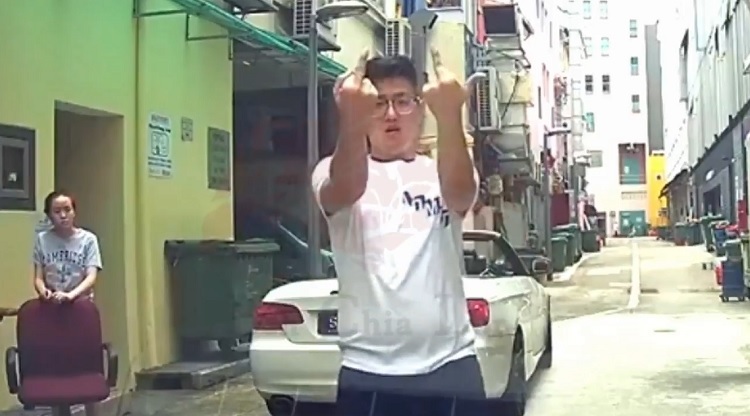 In this week’s episode of Inconsiderate Drivers of the Week, we feature several impatient drivers who can’t seem to follow basic traffic rules. A young man was also caught flipping the bird on camera.


Captured at the back lane of Liang Seah street, this gentleman and his friends were busy unloading several items from their car. Unfortunately, they were also blocking off the already narrow service road. The cam driver, who had been waiting patiently for some time, decided to sound his horn to get them to move their vehicle.

The young man in white probably saw this as an act of confrontation, so he proceeded to show both middle fingers at the driver. In our honest opinion, this situation could have been handled better by both the cam driver and man in white.

Instead of sounding his horn, the cam driver could have wound down his window and asked them nicely to move their vehicle to side. Similarly, the gentleman in white could have been more apologetic after the cam driver sounded his horn at them. Two wrongs don’t make a right, and both parties could have handled the situation more civilly.

Instead of forming up like other vehicles, this PHV driver decided to take matters into his own hands. Wanting to skip the queue, the driver drove against the flow of traffic on a one-lane road along Hougang Ave 4.

Unfortunately for him, there were other vehicles that were approaching him. This caused him to reverse all the way back to the end of the line. We hope this humiliating experience was a wake-up call for the PHV driver.

Another red light beater makes it into our list this week. In this instance, the driver was probably not paying attention to the traffic light. After the car in front completed a left-turn (the left-turn on red signal was on), the white car driver probably thought it was okay to drive off as well.

While in the midst of crossing the junction, a motorcycle was approaching from the adjacent lane. Both the car and motorcyclist failed to stop, resulting in a collision. Luckily for both parties, neither of them were travelling at high speeds.

Regardless, this accident could have been easily avoided if the car driver had paid more attention to the traffic signals on the road.

These drivers probably thought that they were being smart and tactful, but in reality, they were just being a nuisance on the road. Similar to the PHV driver above, these cars failed to form up properly on the road. Instead, they all made a left-turn on a straight-only lane.

This act might seem harmless to some, but it often causes unnecessary jams on the road, which in turn makes it inconvenient for other drivers. If you have a habit of doing this, just remember to spare a thought for fellow road users. After all, you wouldn’t want someone doing this to you right?


This Blue Toyota CHR driver almost caused an accident after cutting across multiple lanes, including a chevron marking. It appears that the driver had wanted to drive straight, but he ended up on a left filter lane instead. Realising his mistake, he abruptly switched lanes without checking for traffic.

The cam driver had to employ his emergency brake in order to avoid a collision. Netizens on Facebook suspected that he was following a GPS. If there were a downside with using a GPS, it probably would be this – inaccuracy with directions.