​Inconsiderate Drivers of the Week: Episode 4 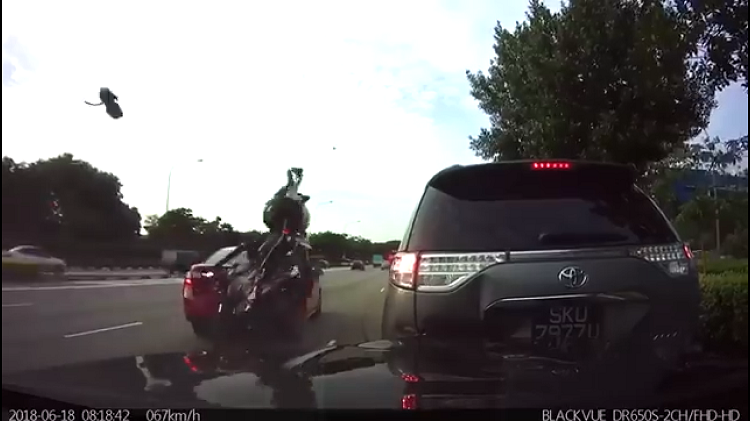 Several accidents and near-accidents were captured in this week’s episode of Inconsiderate Drivers. Remember to drive carefully, and exercise patience and vigilance on the road.

By swerving out of his lane suddenly, this Trans-Cab driver caused a multi-vehicle accident on the PIE highway. As seen in the video, the cab driver turned left from the fast lane without signalling or checking for traffic. The sudden lane change caused another car to collide with the taxi, which was then rear-ended by a motorcyclist. The impact sent the motorcyclist over the taxi.

It’s been a bad week for Trans-Cab as another of its drivers was caught breaking traffic rules. In this clip, the driver is seen cutting across the road to make an illegal and dangerous left turn. He probably missed the earlier left turn lane, but that doesn’t give him the reason to drive recklessly. His thoughtless action caused moving traffic to come to a halt. Luckily, no accident was involved.

An off-peak car has been caught on camera for dangerous driving. According to the cam owner, the off-peak car came from behind and cut in front of them suddenly. This caused the cam owner to swerve left to avoid an accident. In hindsight, the cam owner should have braked instead of swerving into another lane.

The owner of this black car failed to exercise road awareness (and common sense) by making an abrupt left turn from a straight-only lane. Clipping another car while making the turn, we wonder what made the driver make such a haphazard and reckless decision.

5) BMW Collides with Lorry During Right Turn, Causes Lorry to Flip Over

How did the BMW driver fail to see the lorry that was going straight? Maybe the BMW driver was distracted? Whatever the reason, the driver should have paid more attention to the road. Needless to say, this accident could have been easily avoided.