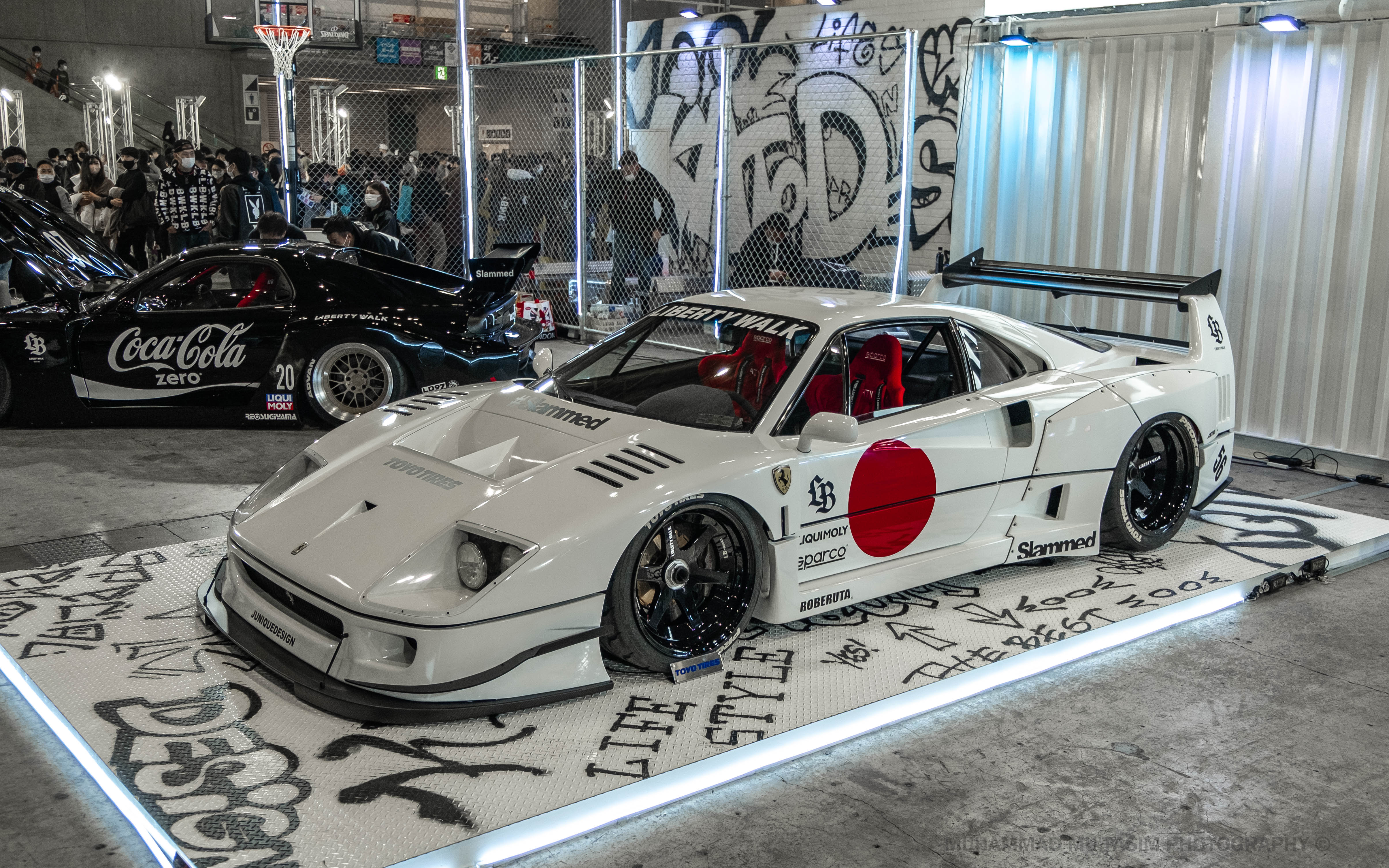 Japanese tuning house Liberty Walk is no stranger to controversy. Their creations have received both praise and backlash from the international car community; having outrageous body kits slapped onto just about everything, from the humble Copen to the decadent Aventador.

The company decided to turn the dial up to 11 at this year’s Tokyo Auto Salon with their latest creation – the widebody Ferrari F40. And it's perhaps the most extreme (not to mention polarising) one in their portfolio yet. 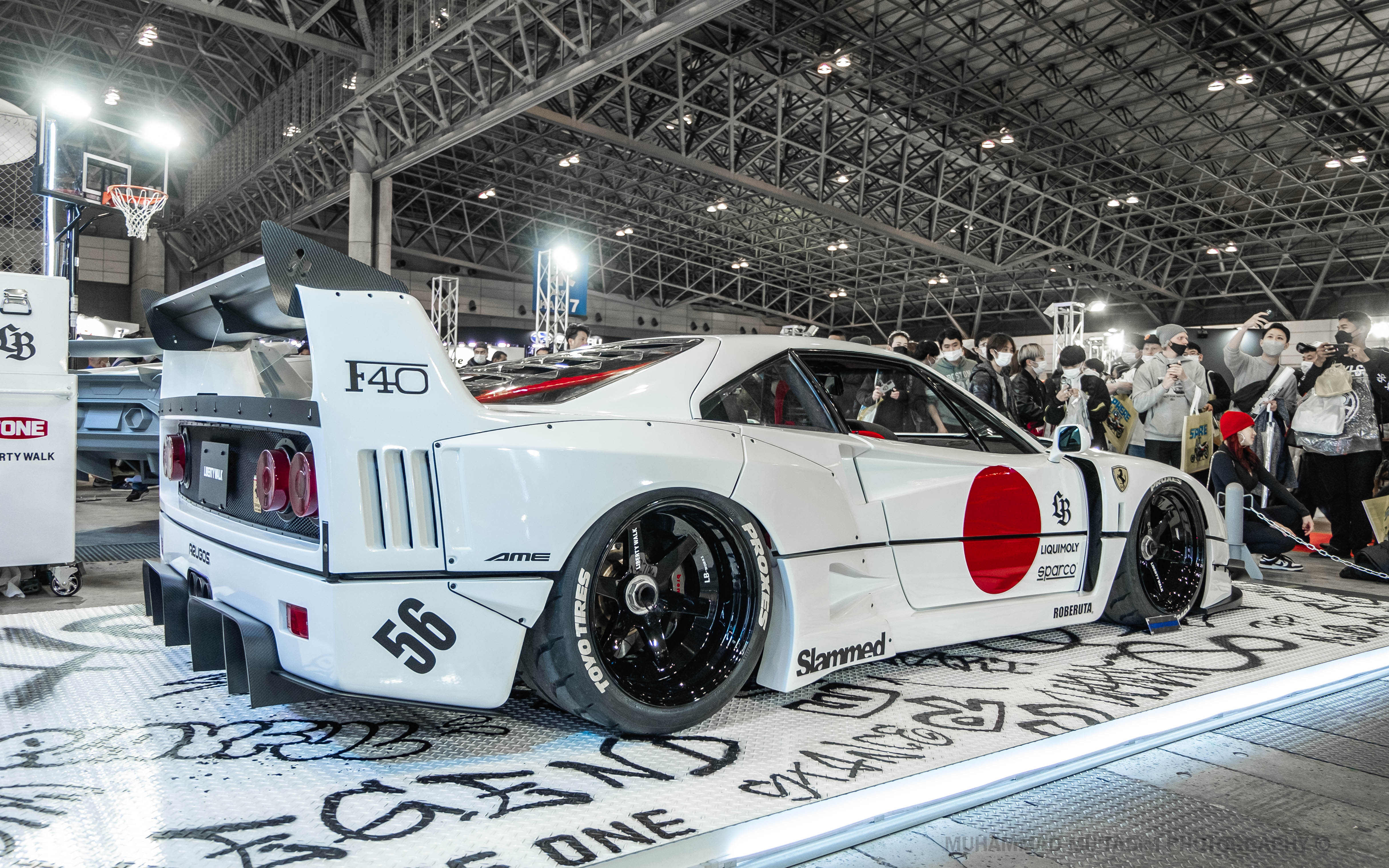 Right off the bat, the LBWK F40 screams of excess. Despite its relatively conservative white colour scheme with a red Japanese flag on the doors, this F40 is anything but restrained. The Ferrari has traded its naturally wide frame for an even wider one, with the tuning house's signature riveted overfenders and wider tyres dominating the rear section.

It also gains a much more pronounced set of diffusers flanking the trio of exhaust pipes, as well as a more aggressive carbon fibre wing. On the mesh rear grille, the traditional Prancing Horse emblem has been removed. In its place is an emblem from Ferrari Club Italia. 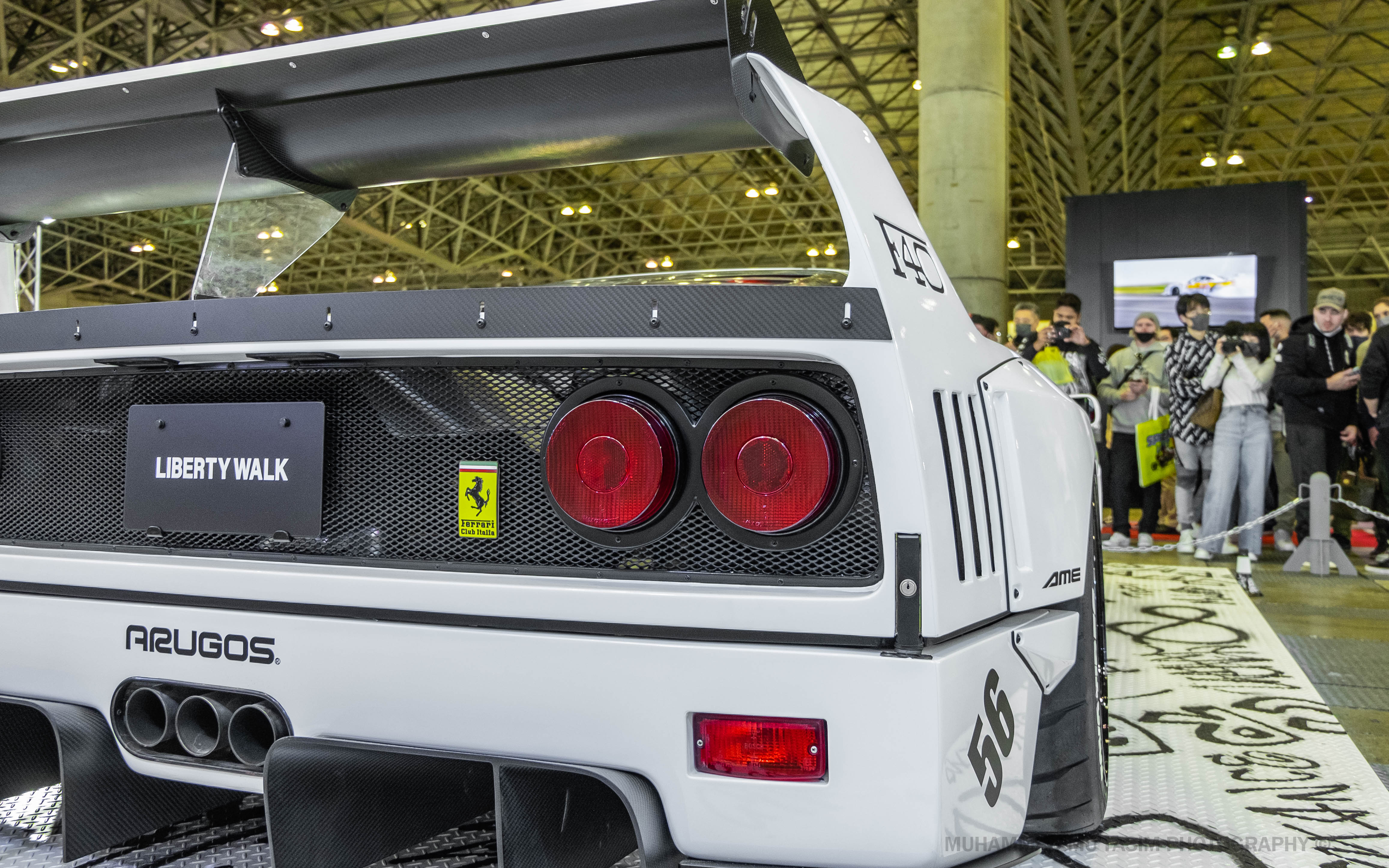 Contrasting sharply with the white paintwork are the gloss black AME wheels, recessed deep inside the trackday tyres.

With its extremely low "slammed" ride height and negative camber on all four wheels, the F40 possesses a visual profile that's more suitable in the realm of Super GT racing than on the city streets of Shibuya. 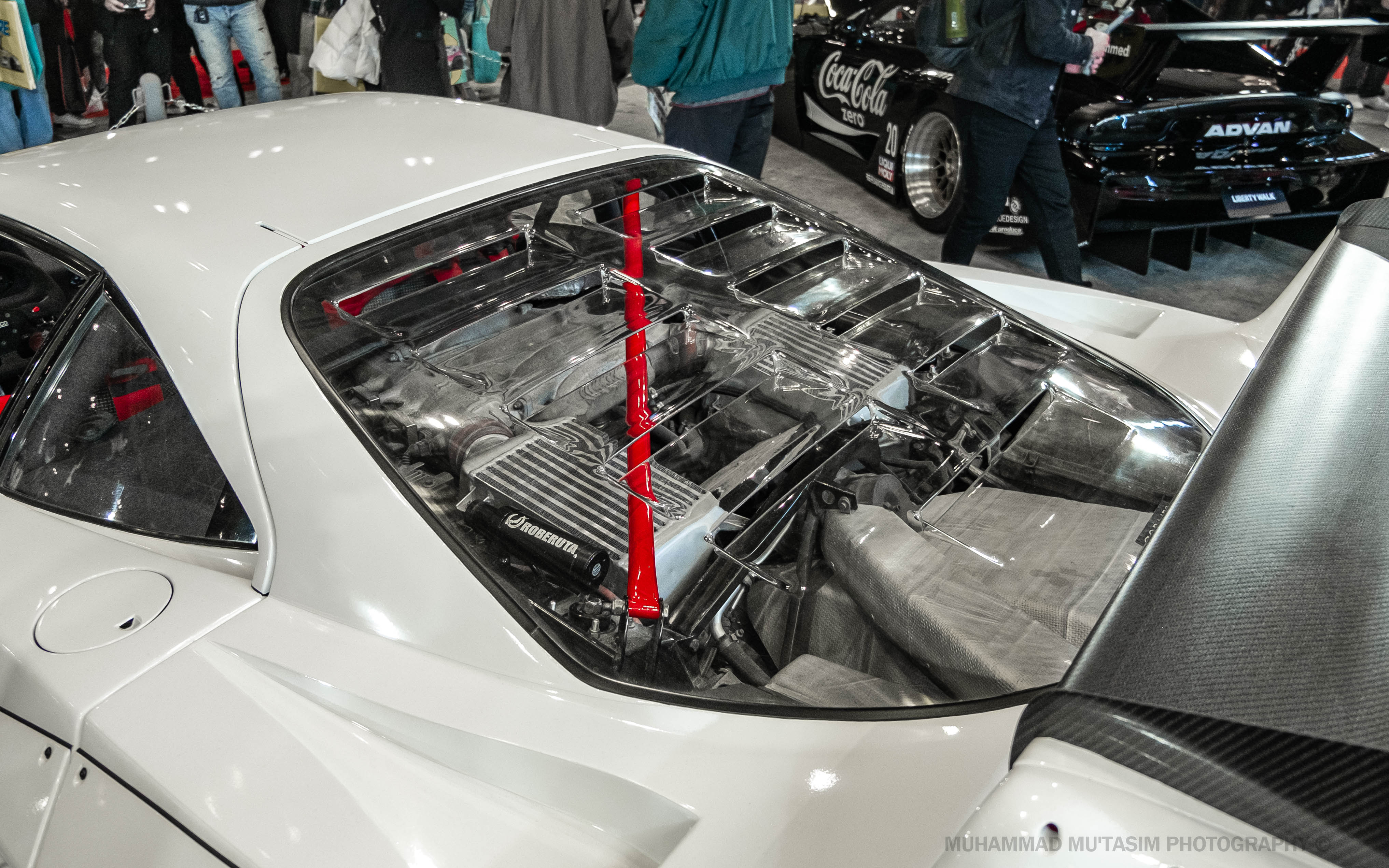 Under the louvred clear engine cover sits the F40's venerable 2.9-litre twin-turbo V8 powerplant, producing 471 horses and 577 Nm of torque when it rolled out of the Maranello factory brand new. No word on whether Liberty Walk has given the V8 a tune-up, but we can see a strut brace running across the engine, along with a Roberuta suspension lifter system. 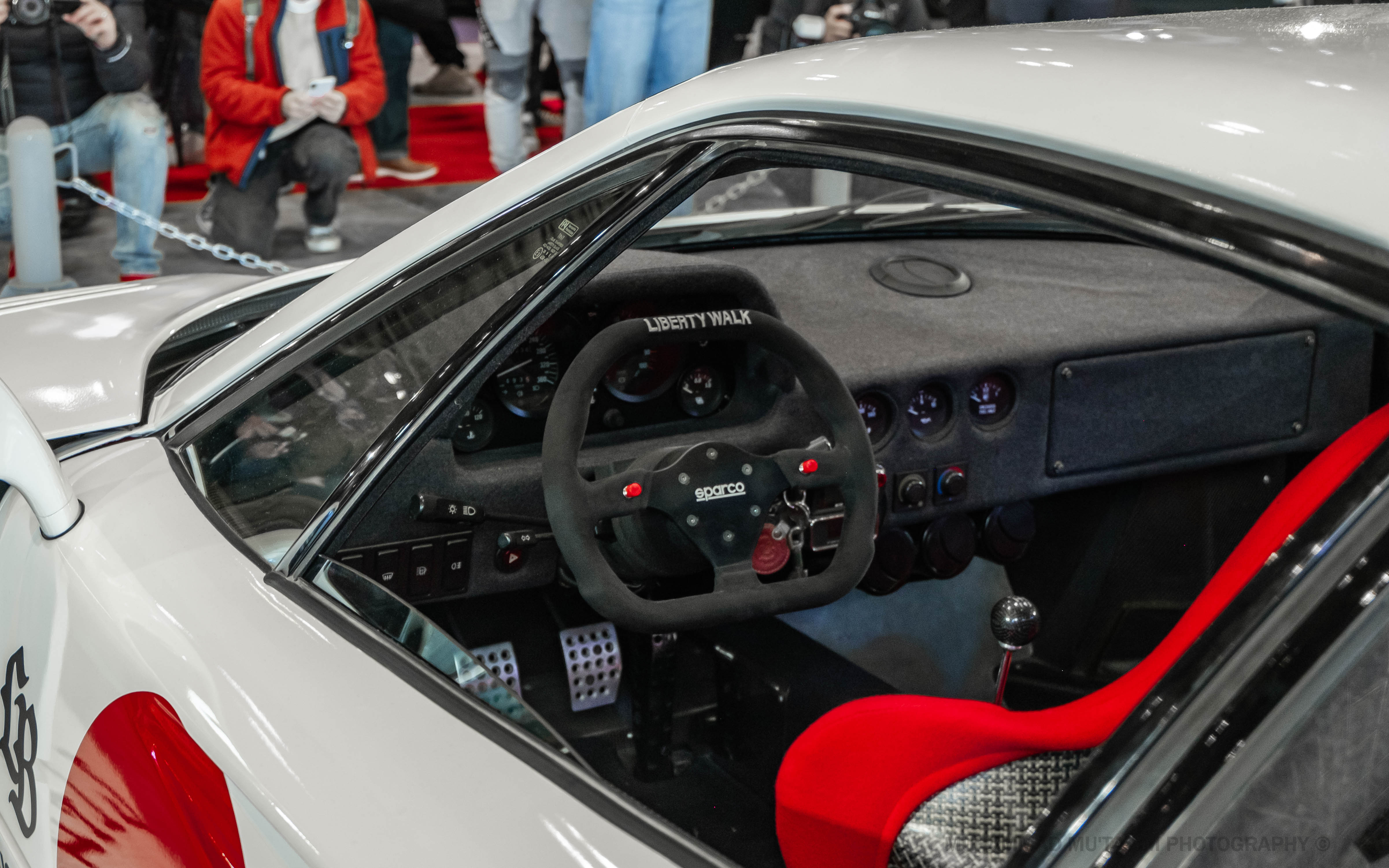 The cabin itself is fairly stock (Ferrari fans can now breathe a sigh of relief), save for a steering wheel and a pair of red carbon fibre-back bucket seats from Sparco.

Keeping the LBWK F40 virtually glued onto the tarmac is a set of Toyo Proxes, with a big brake kit from Brembo to stop it in an instant. 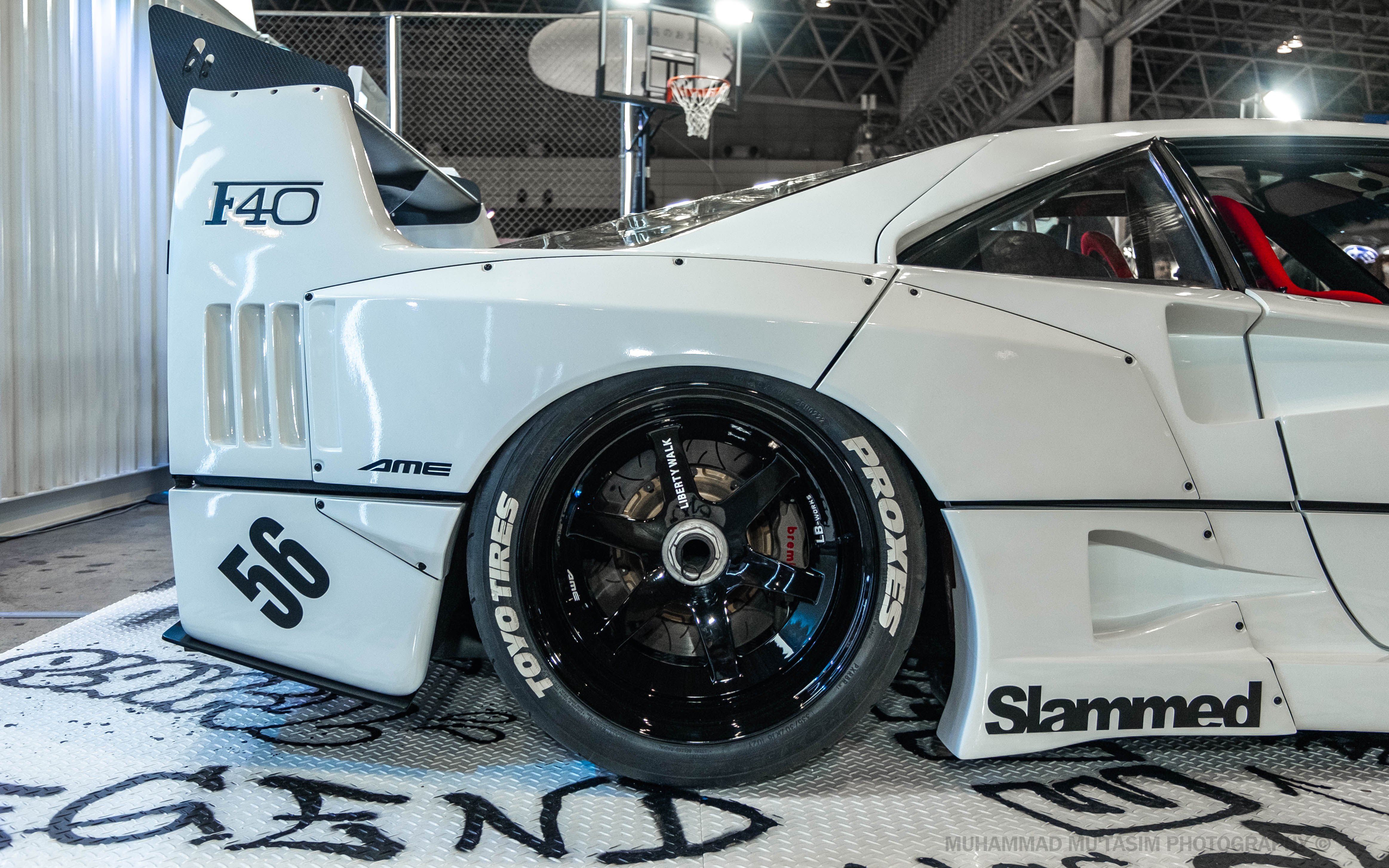 Gone are the iconic 80s fantastic pop-up headlights. They're now recessed into the rest of the bodywork, just like the F40 LM race car. Speaking of which, this creation also features a single NACA duct on the bonnet and vents above the front fenders, much like the LM. It also benefits from a new front cowl and cowl duct.

What sets this apart from the official Ferrari track special, however, are the front splitter and canards that extend all the way to the front grille. 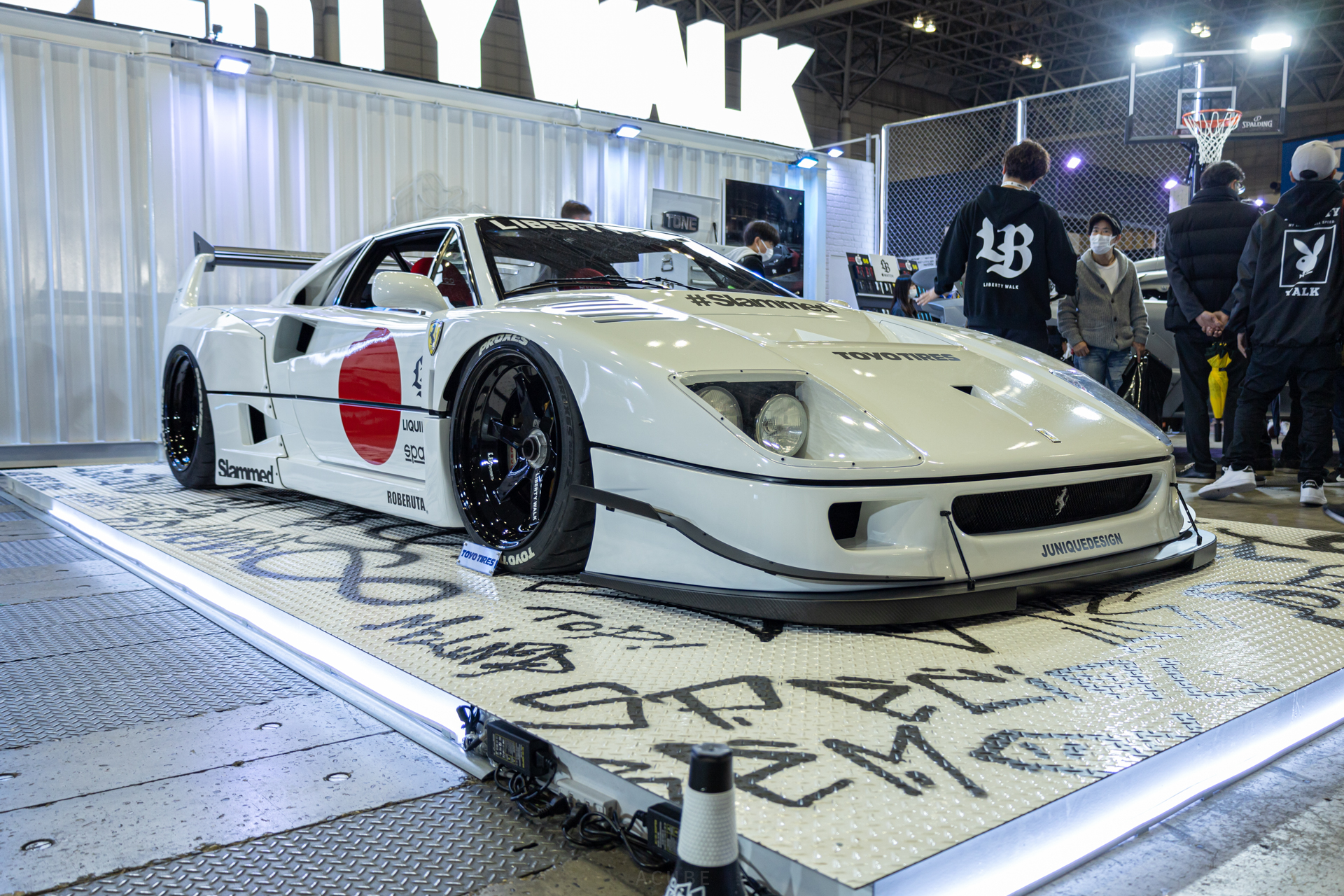 This is exactly the sort of madhatter creation that one can expect from Liberty Walk, and by extension, the Tokyo Auto Salon. While some may balk at the sacrilegious nature of cutting up a rare Ferrari, others (such as the Editorial team here) enjoy and appreciate the creativity and craftsmanship put into turning such a ridiculous idea into a reality. 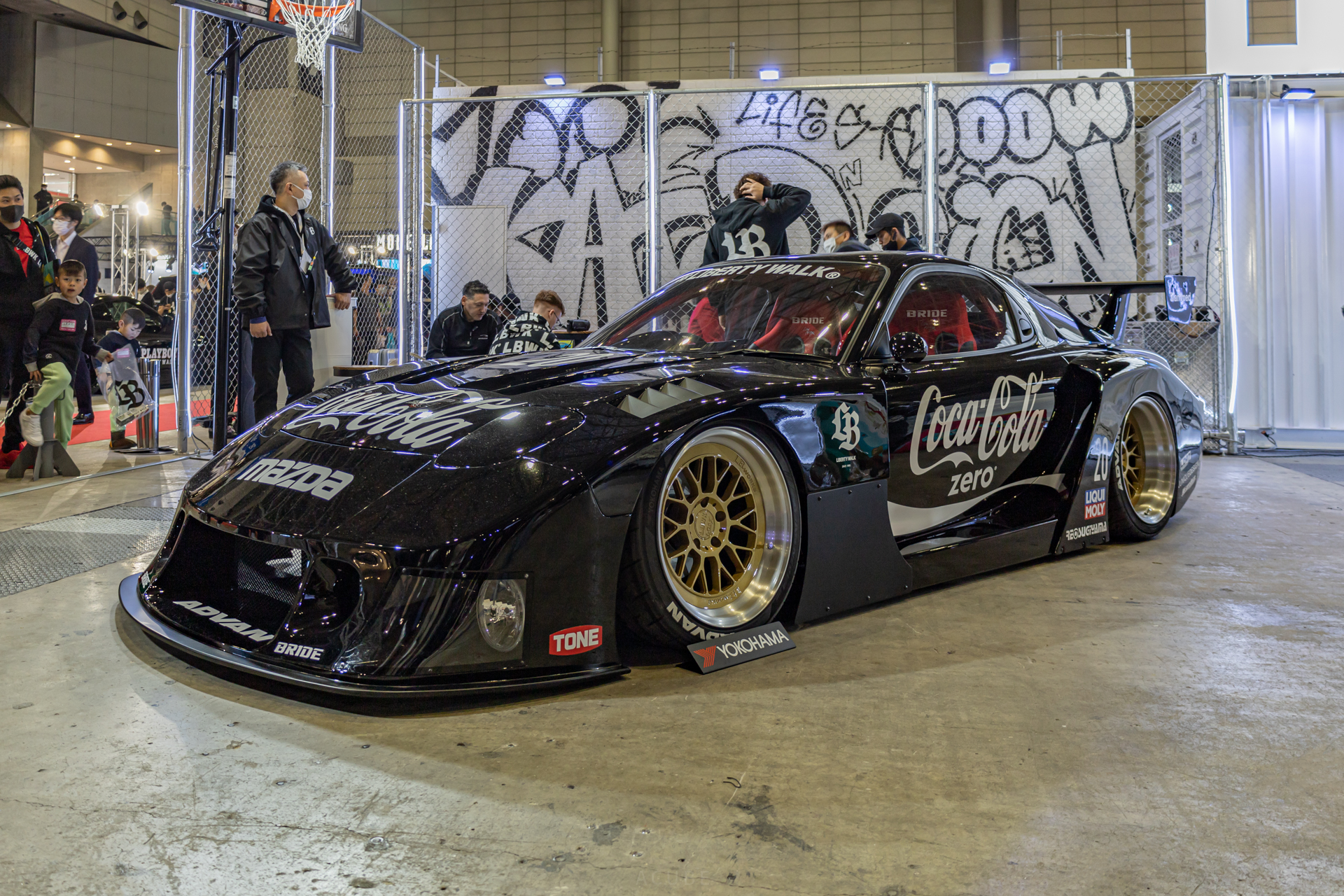 Another notable creation on display at the Liberty Walk booth is this Silhouette Works RX-7, inspired by the Super Silhouette race cars that dominated the All Japan Sports Prototype Championship in their 80s heyday.

Like the F40, the FD3S-generation Mazda features a complete widebody kit that you can purchase as a whole or as specific parts. You can see clear nods to the Super Silhouette class, like the fog light covers, wide angular fenders, and positively massive wing. 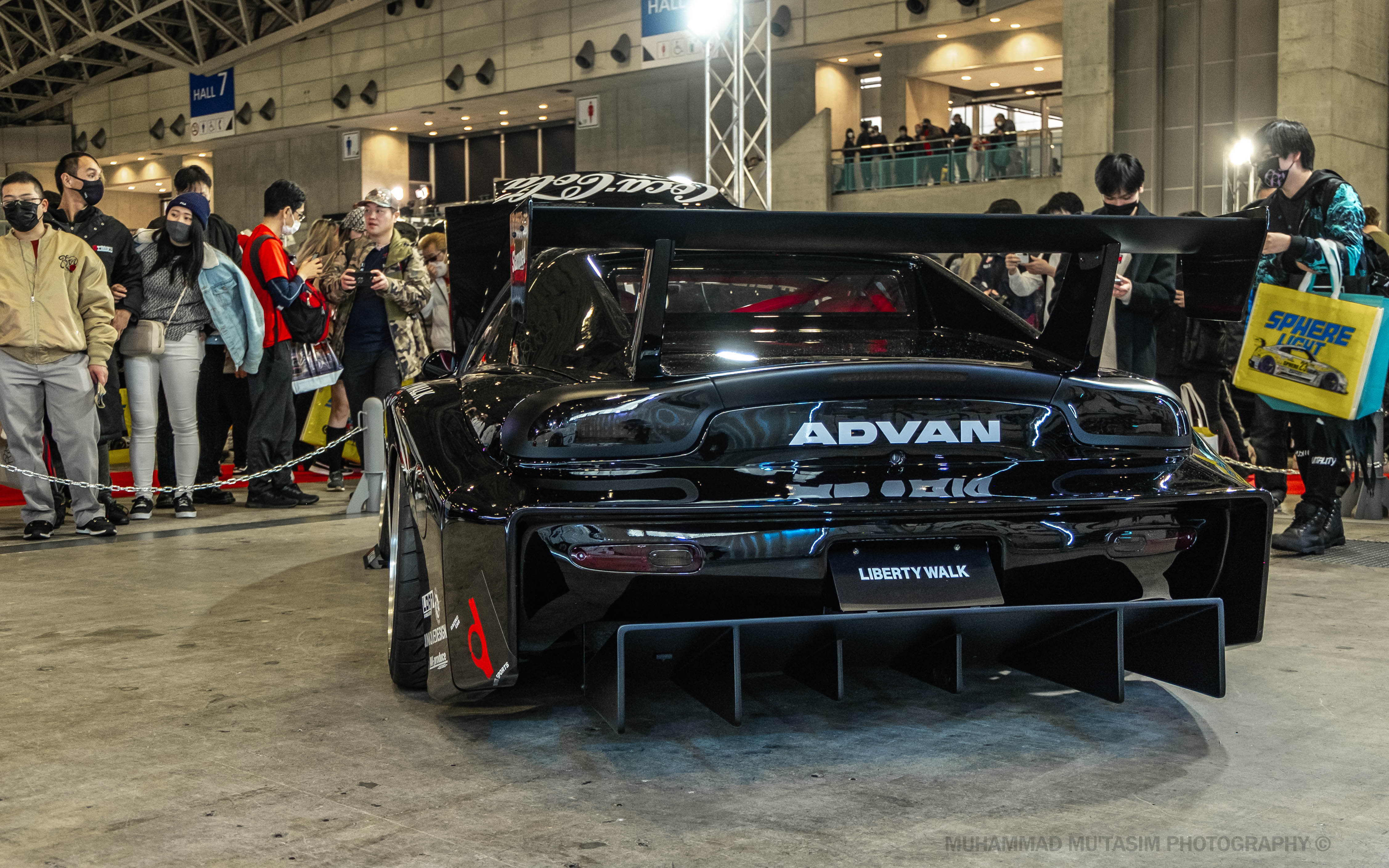 LB Works deep-dish wheels and Yokohama Advan tyres connect the RX-7 to the ground, while the oversized rear diffuser increases its downforce. Inside, the Mazda features a host of racing-specific upgrades, including a full roll-cage setup and Bride bucket seats. 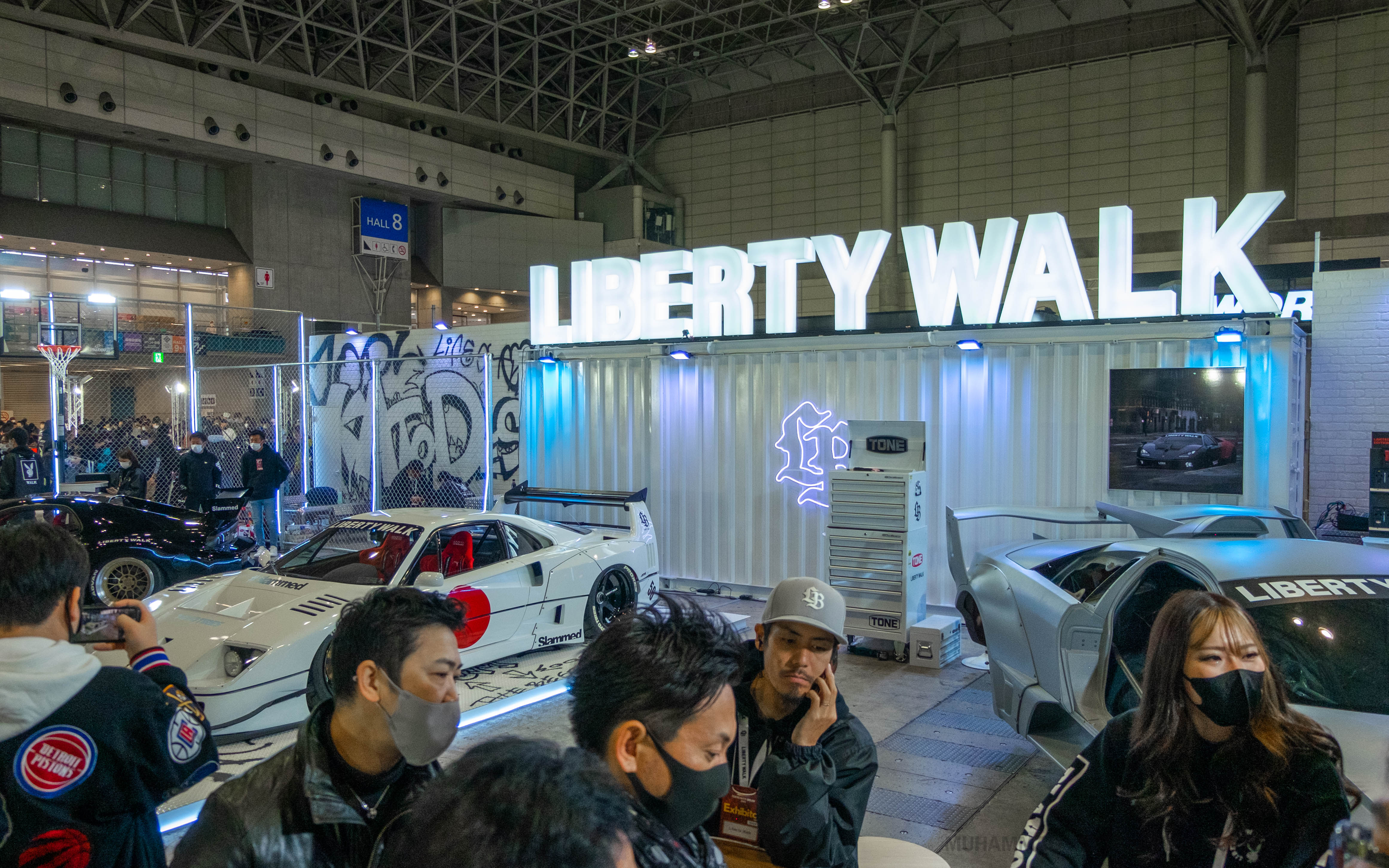 What do you think? Has Liberty Walk gone too far with their latest creations, to the point where cult classics like the F40 and RX-7 are not spared from their insane visions?

Or do you think the car community should welcome the likes of them with open arms, and encourage more daring interpretations of iconic cars?

Let us know in the comments section below!