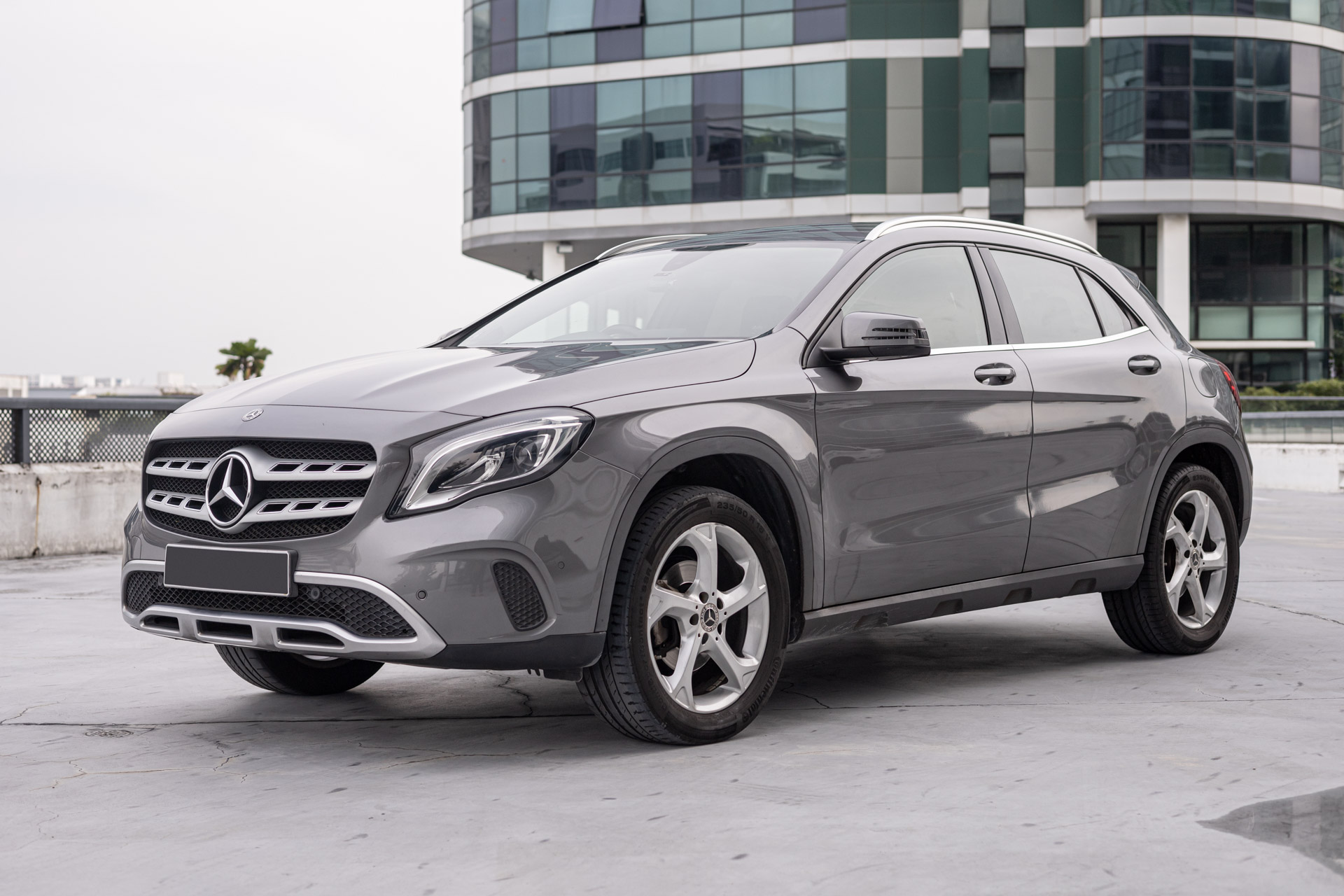 Being the smallest crossover offered by Mercedes-Benz, does the GLA-Class’ small size conversely means it comes with a long list of shortcomings?

The Mercedes-Benz GLA-Class first debuted as a concept at the 2013 Shanghai Auto Show, before being officially launched a month before the 2013 Frankfurt Auto Show in September. Being based on the A-Class, the GLA-Class was also part of the entry level lineup for Mercedes.

The “GL”  stood for Geländewagen, or off-road vehicle in German, although it was clear from the beginning that although it was to keep in line with Mercedes’ naming nomenclature, the GLA-Class wasn’t a vehicle to go off-road in, unlike the purpose-bred G-Glass.

This is a 2018 Mercedes-Benz GLA180, which is from the first generation, X156, of the GLA-Class. Being a 2018 model, it also benefited from the 2017 facelift, and this gave it a redesigned grille, updated front and rear bumpers, an updated wheel design, full LED headlights and taillights, as well as a new eight-inch infotainment screen.

The GLA-Class was available with a range of petrol and diesel engines, including an AMG variant, automatic or manual transmissions, and came either in front-wheel drive or all-wheel drive. 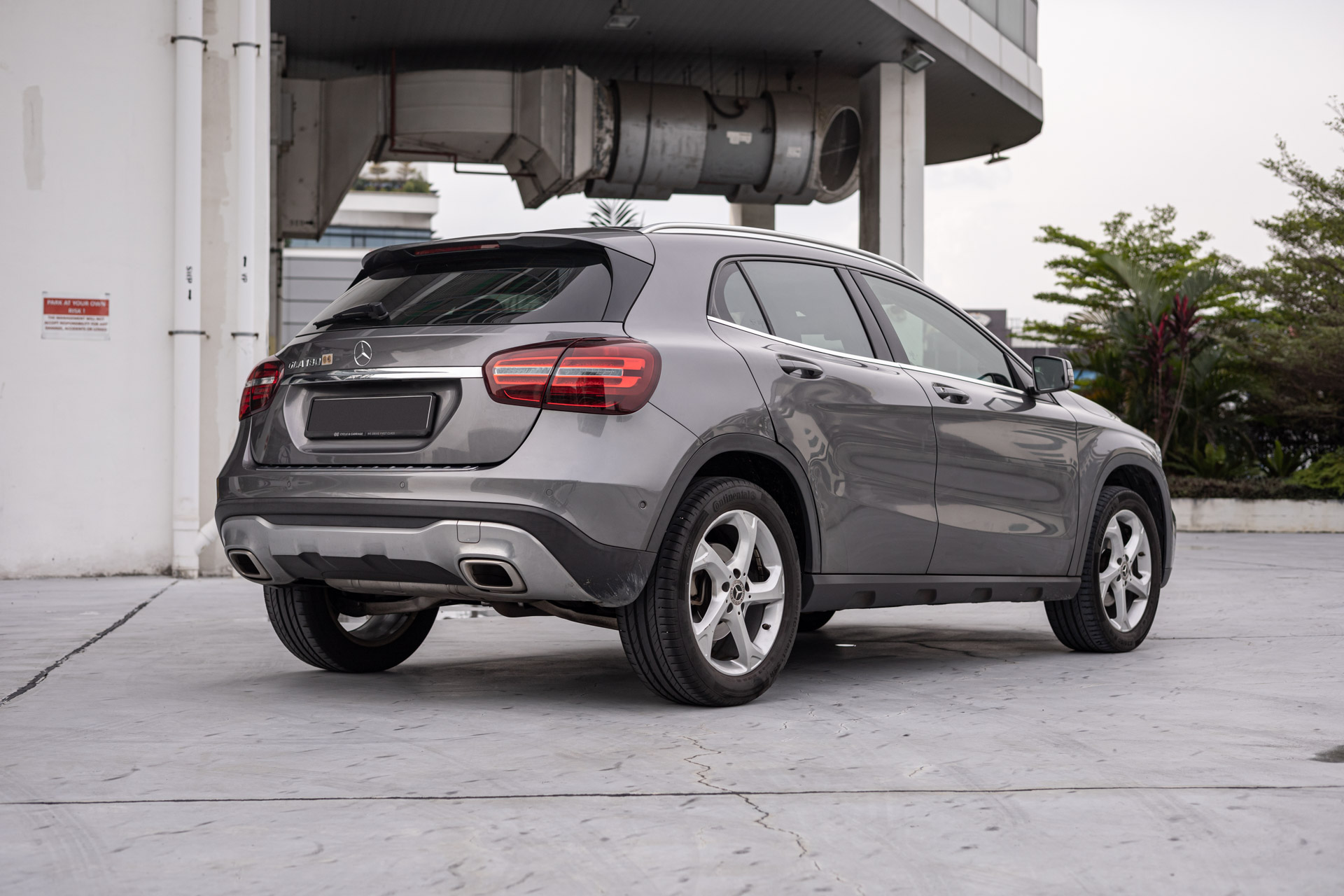 This particular unit, being a GLA180, came with a turbocharged 1.6-litre four-cylinder engine, producing 121 bhp and 200 Nm of torque, with power being sent to the front wheels via a seven-speed dual-clutch automatic transmission.

Being based on the A-Class, it was relatively light, weighing only 1,435 kilograms, with the century sprint accomplished in 9.2 seconds. Not earth-shatteringly quick by any means, but for a car with only 121 bhp, it was a fairly decent time.

Interestingly, the GLA-Class was also restyled and rebadged as an Infiniti Q30 and QX30, which was on sale from 2016 to 2019. The only difference was the exterior, as the chassis, underpinnings and mechanical components were all from the GLA180.

For a car of this size, having a 50 litre fuel tank is as expected. With seven gears, however, it does help to keep engine revolutions in the lower part of the rev range, especially at expressway speeds. 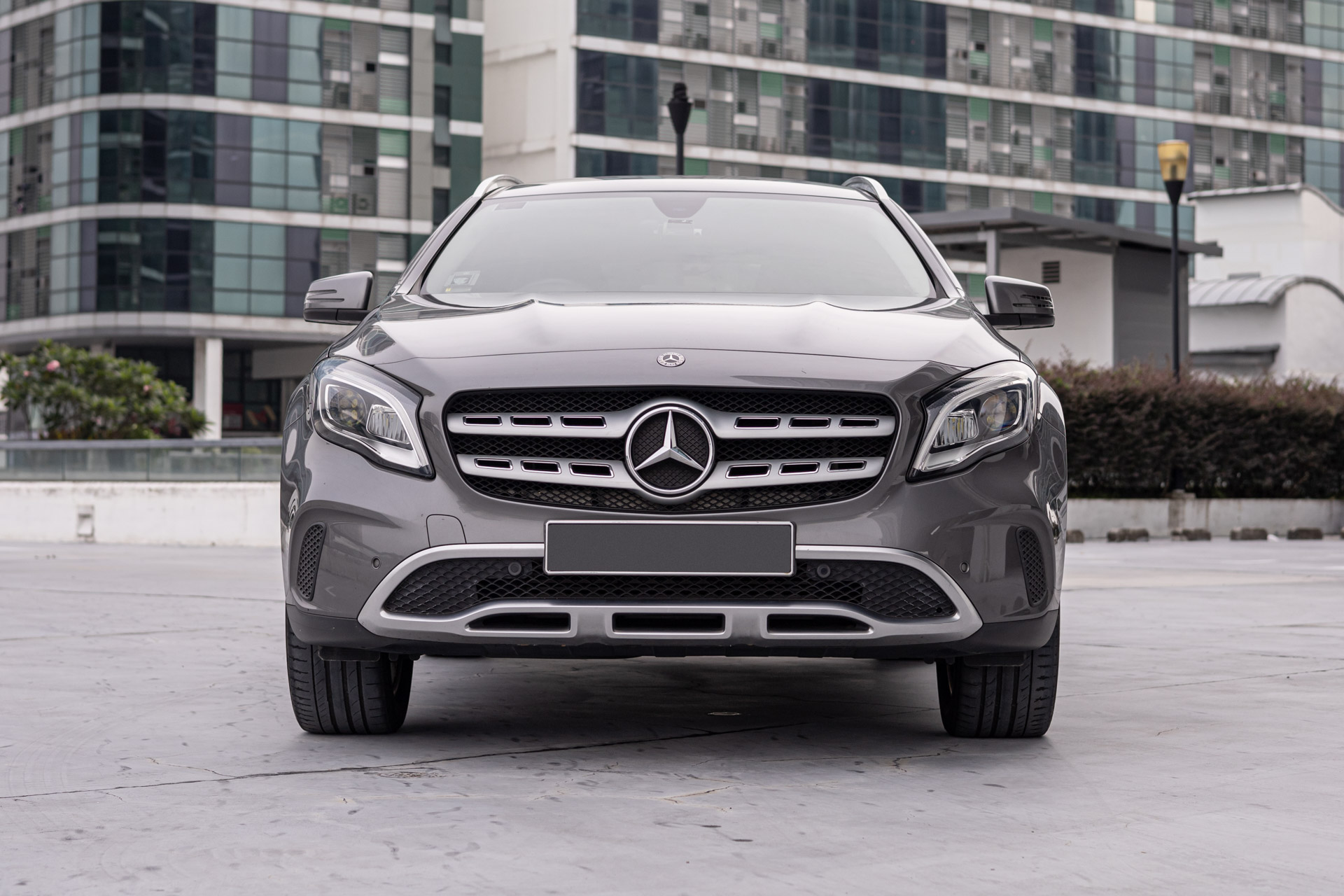 Cruise at the speed limit in Singapore or the North-South Highway, and the engine will maintain a steady 2,000rpm in seventh gear, making for pretty decent fuel economy. While Mercedes-Benz claims an average of 17.5km/l (or 5.7 litres/100km), you should expect the actual figure to be slightly lower by one or two kilometres per litre.

As for reliability, the GLA180 has shown to be fairly reliable, but there are still some known problems about it, especially with the earliest local models from 2014 reaching the end of their COE cycle.

The GLA-Class has been known to have issues with the timing chain and timing chain tensioner, with reports of premature wear taking place, in some cases with higher regularity than others. While this problem is more prevalent in higher mileage vehicles, low mileage examples have also reported this issue. Fixing this issue isn’t cheap either, as the timing chain is located at the back of the engine, making it difficult to access. 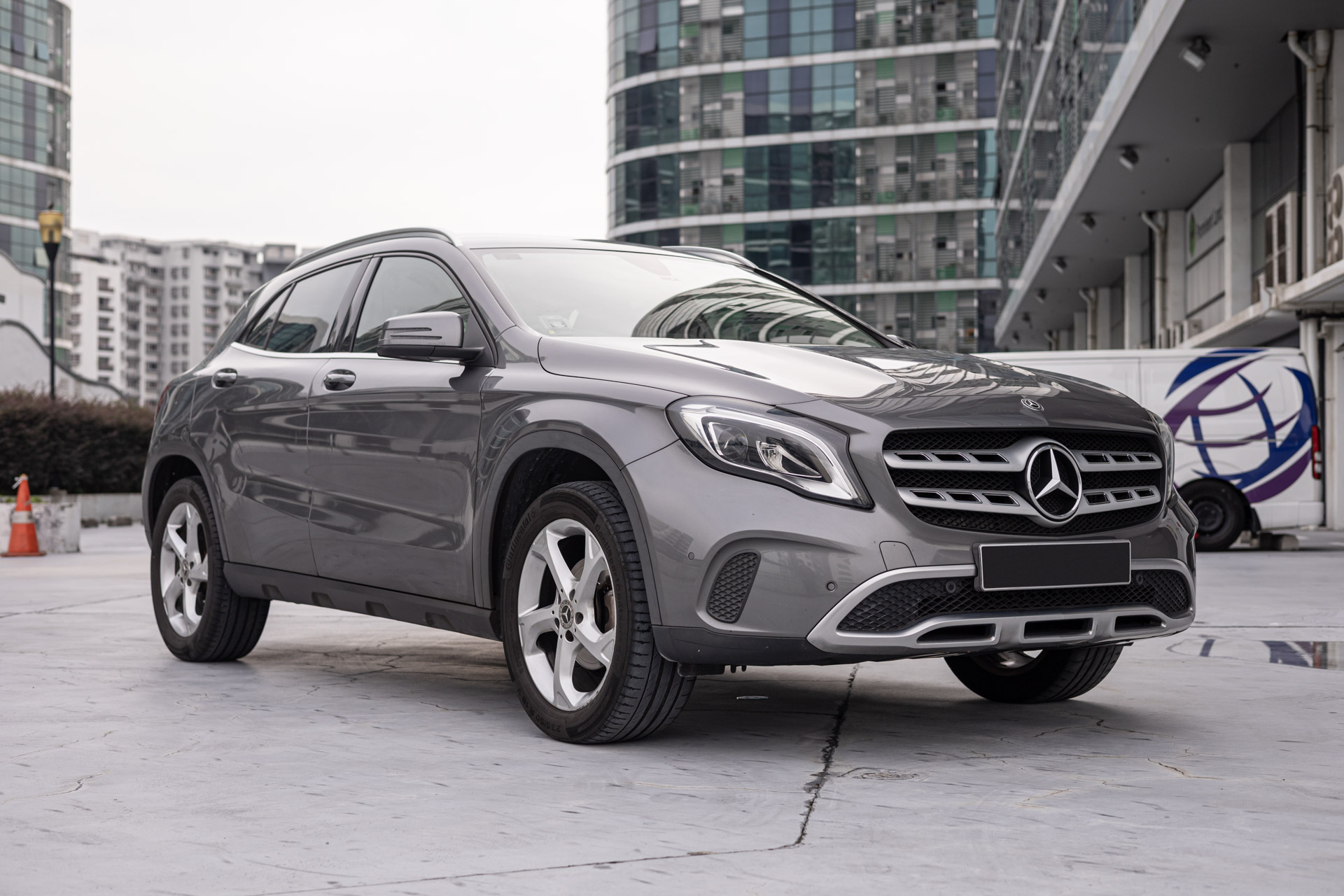 Electrical problems such as issues with the front parking sensors, fuel tank sensor and reverse camera have also been reported, with the problems being more common in older units of the GLA-Class.

One problem, although uncommon, but has also been reported by some owners, is the increase of wind noise, particularly as the car ages. Fortunately, this can be easily rectified by realigning the doors and checking the condition of the door seals, and replacing them if needed.

Lastly, paint quality on Mercedes-Benz models lower down the range hierarchy, which would mean the entry level models like the A, GLA and B-Class, have been noted to not be of the best quality, either with orange peel being noticed from the factory, or with the paint being too soft and easily scratched. 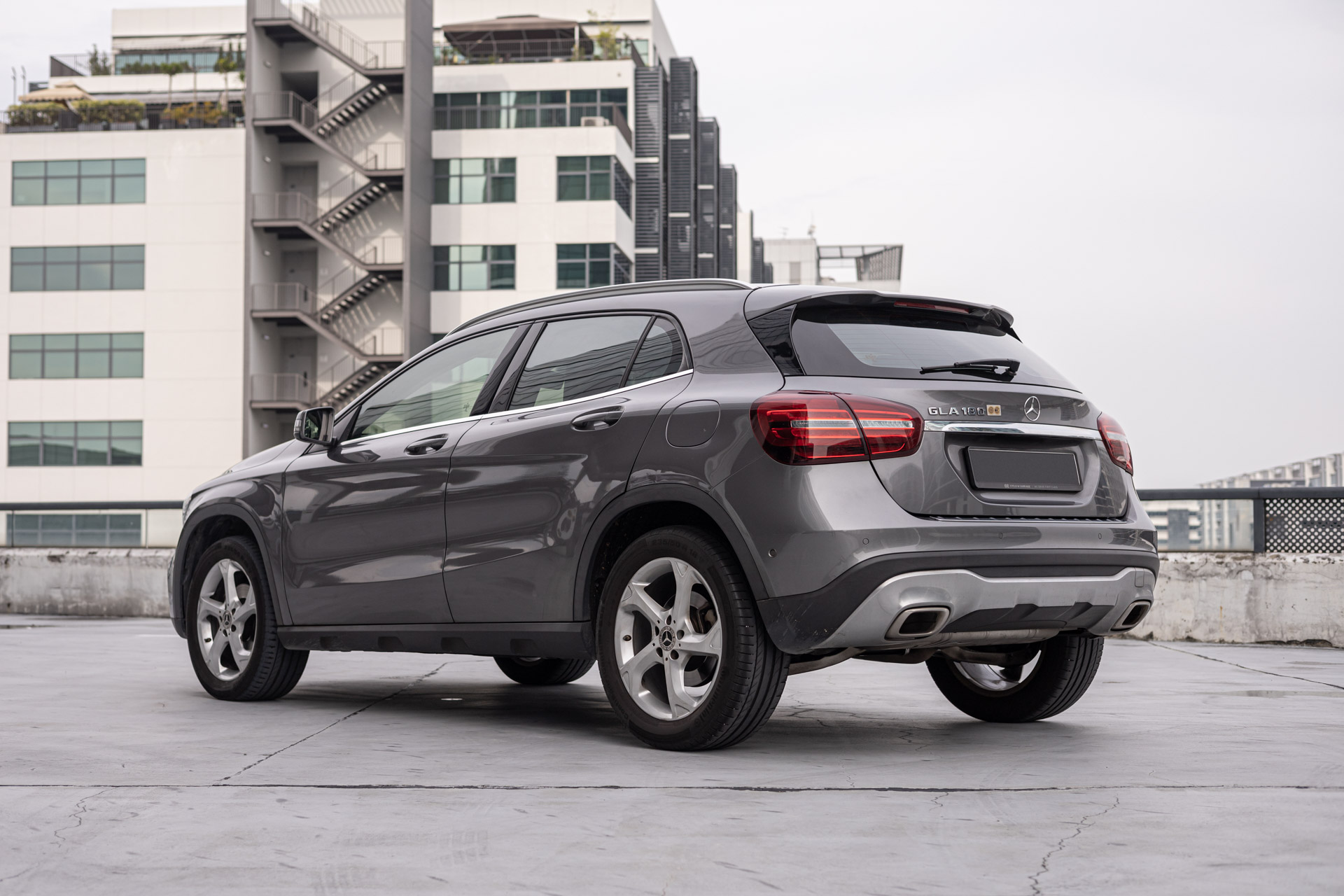 It might just be a cosmetic issue, but a proper detailing job doesn’t come cheap, and the low paint quality might irk more particular owners, especially when the scratches are deeper or in a more obvious location.

Officially, the GLA180, or any variant of the GLA-Class can seat five passengers, including the driver. However, one look from the outside should tell you that fitting three people in the back seat is not advisable, unless it is for really short journeys.

While the GLA-Class has a higher ride height and appears to have more interior space, it’s still based on the A-Class, and that isn’t known for a spacious interior. For comfort, only have two rear passengers, with a third passenger only if necessary. Rear headroom is also not the best, so taller passengers 1.8m and above could have trouble sitting in the back. 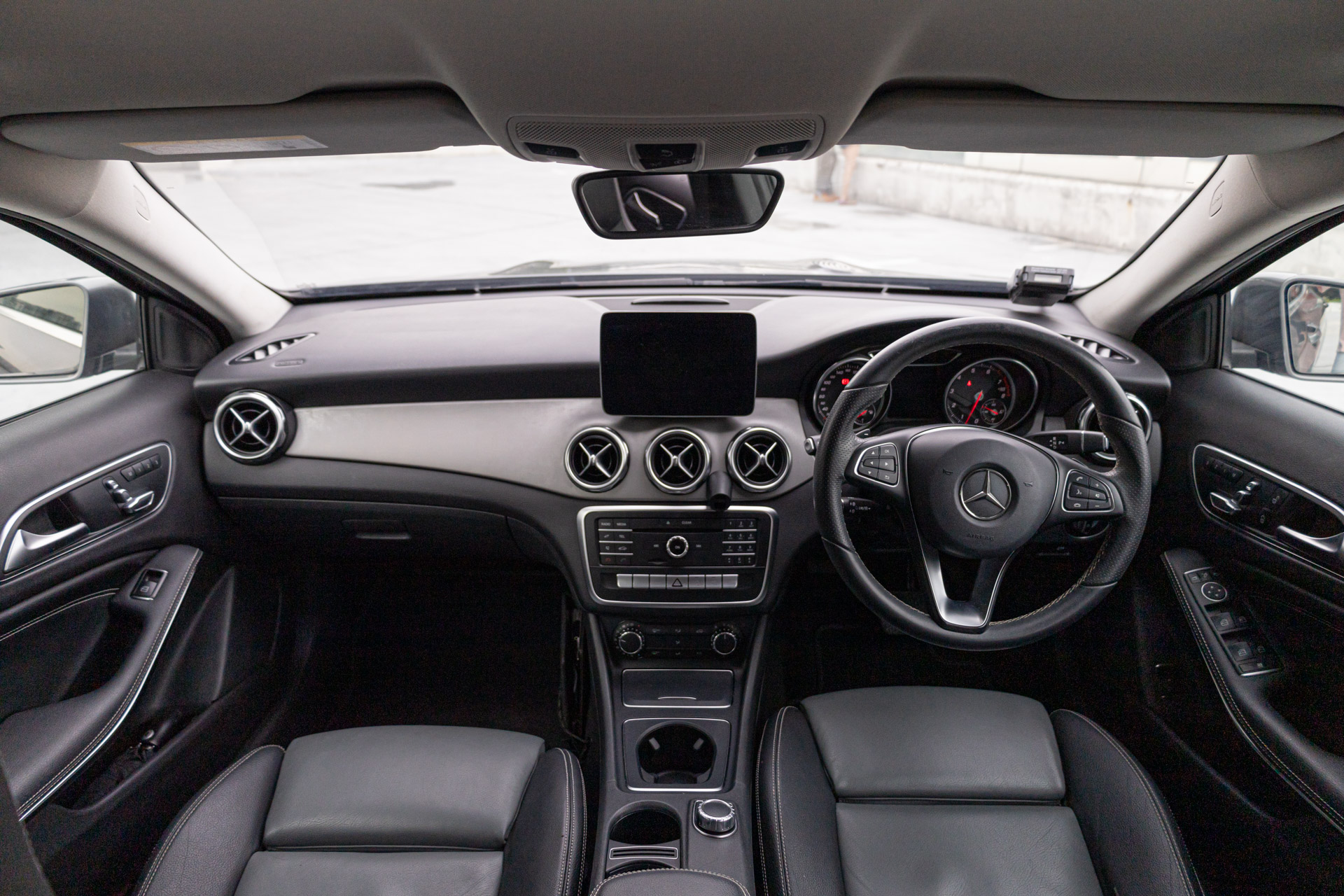 This particular unit is painted in a silverish-grey, has a black interior that compliments the exterior quite nicely. The interior is upholstered completely in leather, from the dashboard, door panels, seats and steering wheel, with some dark silver trim to add a touch of contrast to the interior.

The front seats have full electronic adjustment with lumbar support. With Mercedes-Benz, the seat controls are not located at the base of the seat, like most other manufacturers. Instead, the seat controls are placed on the doors, together with the memory buttons. The front seats also have slight bolstering, which do somewhat help to keep passengers in place when going around corners.

Also, if you’re wondering where the gear lever is, modern Mercedes-Benzs have relocated it to where the right stalk is, behind the steering wheel, with the left stalk controlling the wipers and turn signals. This might seem unintuitive, but you will start to realise that having all the controls in the area around the steering wheel is more conducive to the overall driving experience. 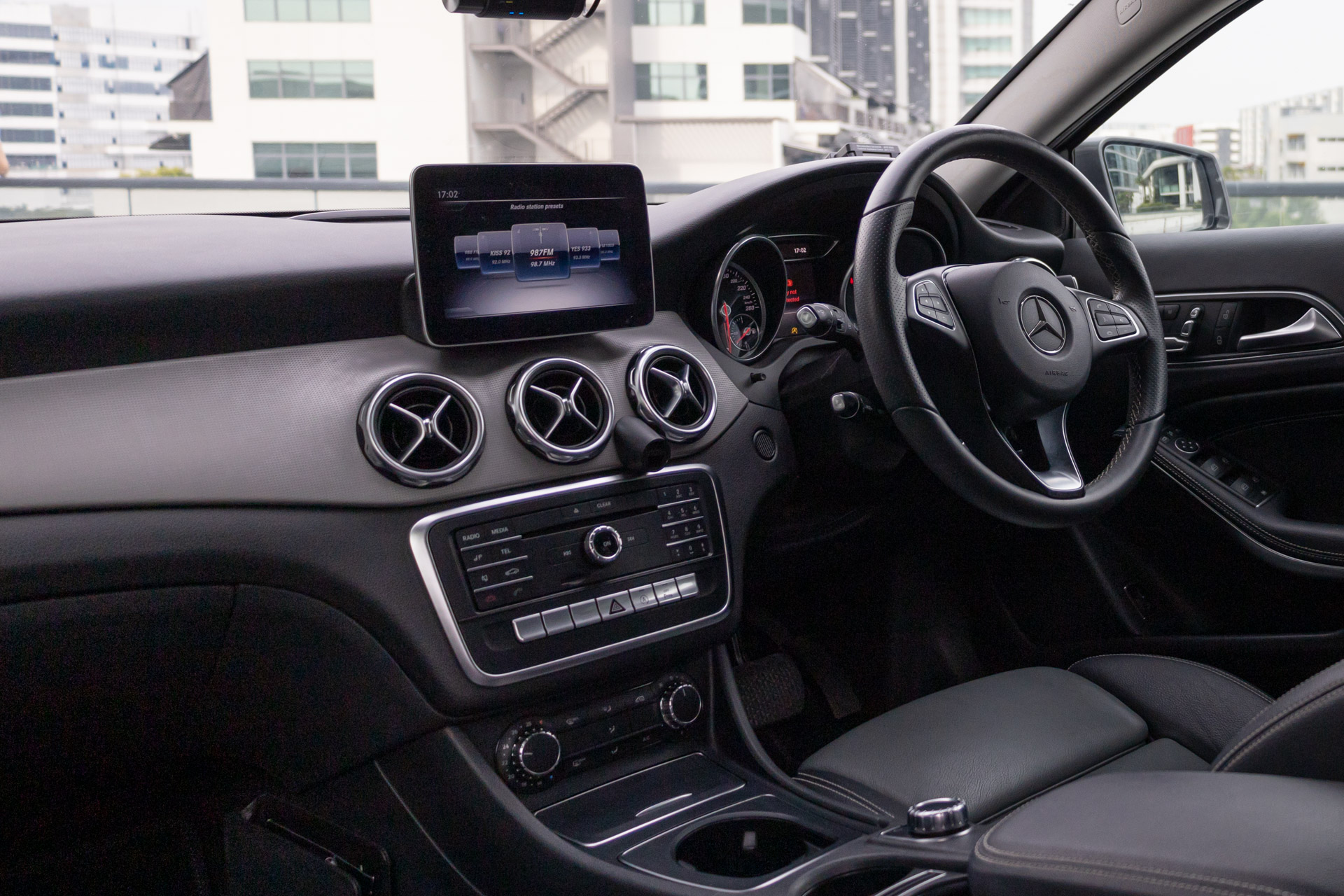 Since the GLA-Class had its beginnings in 2013, it retains most of the original controls for the HVAC and infotainment system even after the facelift. This means that the controls for the air-conditioning system feature physical knobs and buttons that allow for easy and precise adjustment to your desired temperature and fan speed, even while on the move.

The infotainment system is controlled by a single rotary dial, with physical buttons on the centre console and steering wheel for answering the phone and track or radio station selection. The number pad can also be programmed to store radio stations or as shortcuts to various functions.

With an eight-inch screen, the infotainment screen’s size is still decent by modern standards, the graphics are showing their age. Plus, there is only Bluetooth connectivity. No Android Auto or Apple CarPlay here.

The gauge cluster consists of analogue dials for the speedometer, tachometer, fuel and temperature gauges, with a small digital screen in the middle for the trip computer, odometer, remaining range, and other various information, with this small digital screen controlled via buttons on the steering wheel.

The windows are fully automatic with just one touch of the window switch. A little known fact is how the windows can be closed and opened even when the car is off, just by holding down the lock or unlock button on the key fob to wind up or wind down the windows, which is useful if you want to cool down the car on a hot day.

The GLA180 has a boot capacity of 421 litres, which isn’t exactly generous. It will fit at most two large pieces of luggage, but not much else. The rear seats can also be folded down to create more space. Still, it might be best to remove the cargo cover if you want to carry taller or larger items. 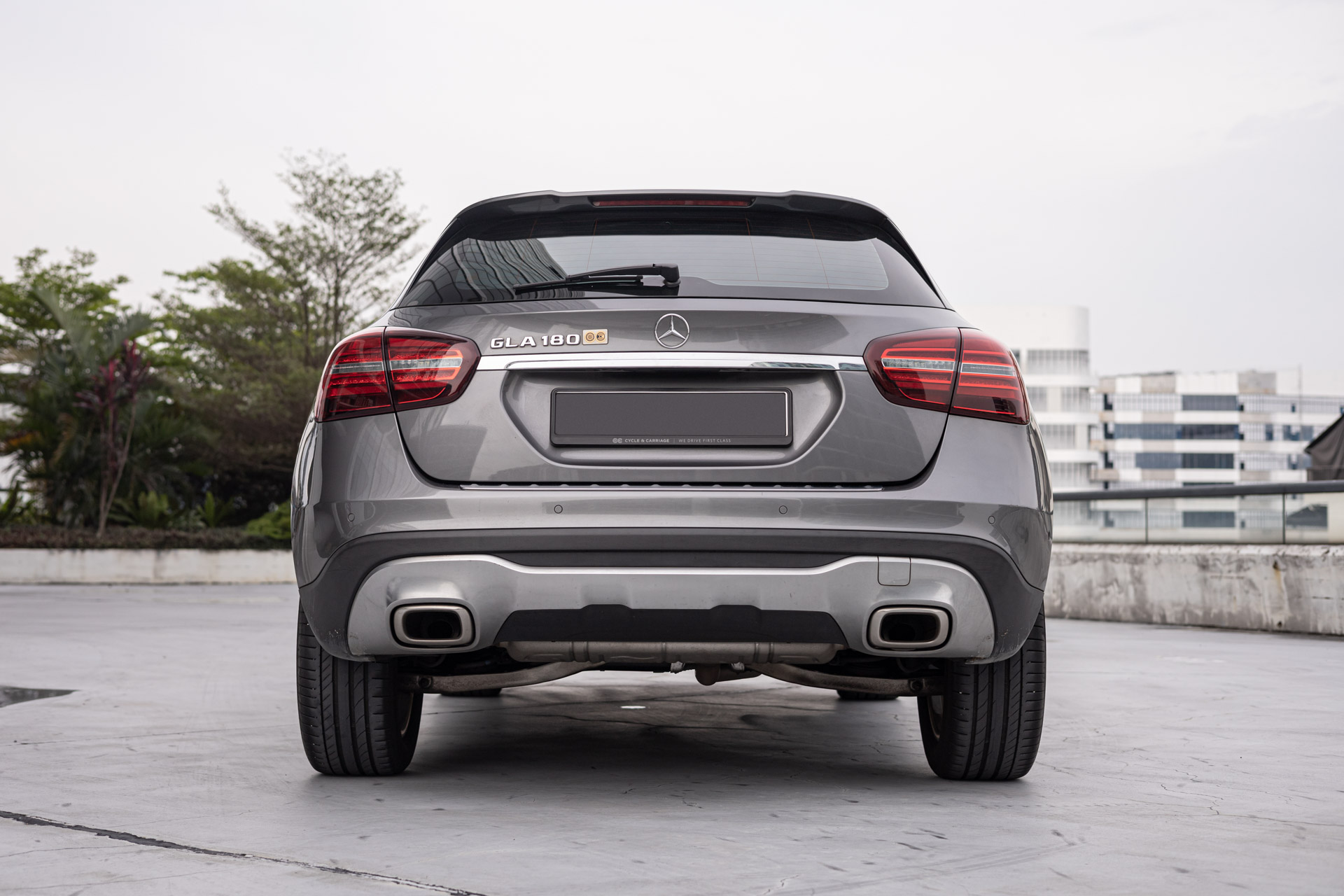 The tailgate is electrically powered, and it can be opened either from the tailgate itself, or via a button within the cabin. 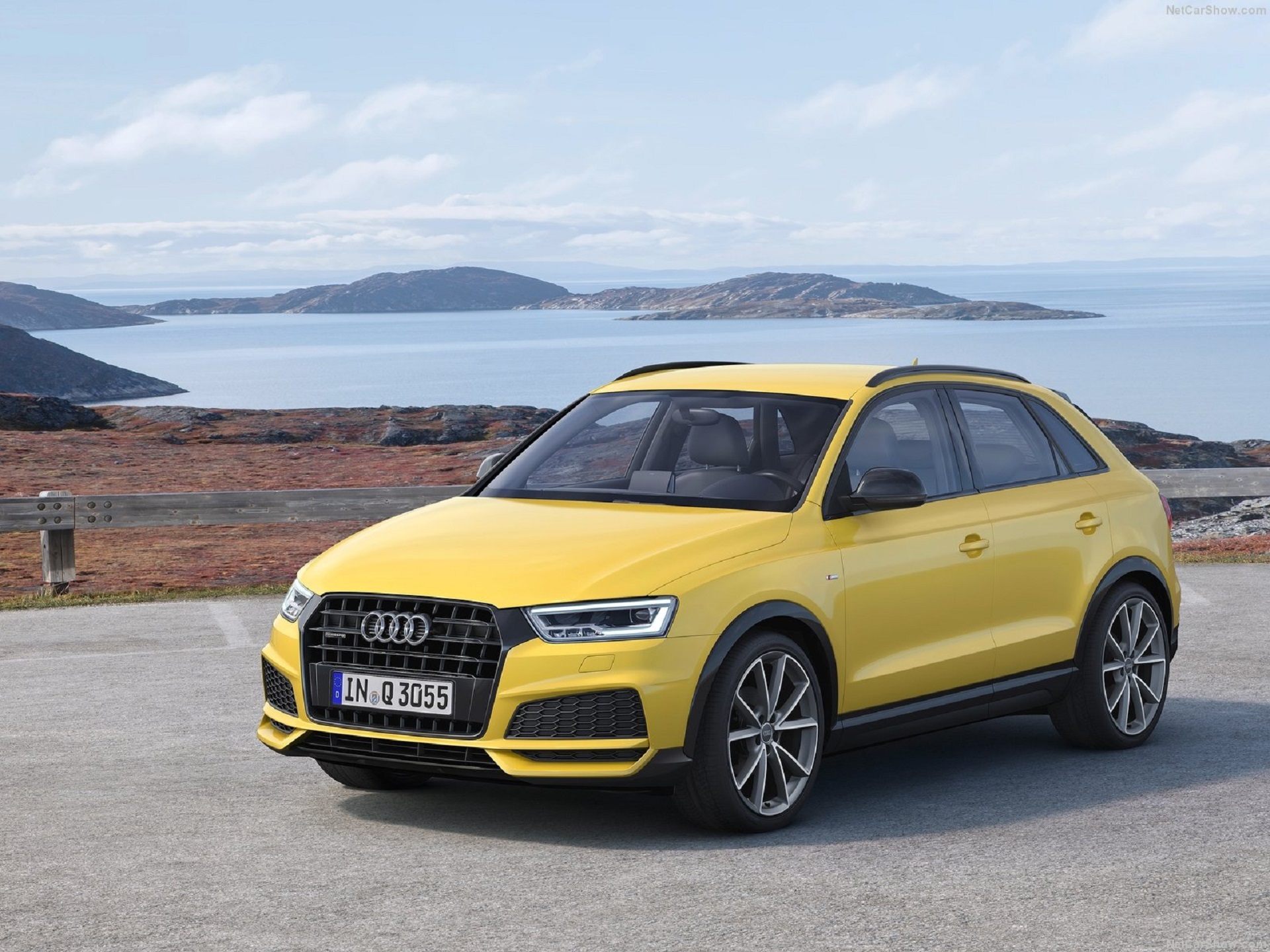 Should you want another sensible compact German crossover, the Audi Q3 is a good bet. Size wise, it was similar to the GLA180, but it had more interior room and could better fit taller passengers in the rear. Plus, even the least powerful variant, the 1.4 TFSI S Tronic, had 150 bhp, which was 29 bhp more than the GLA180! 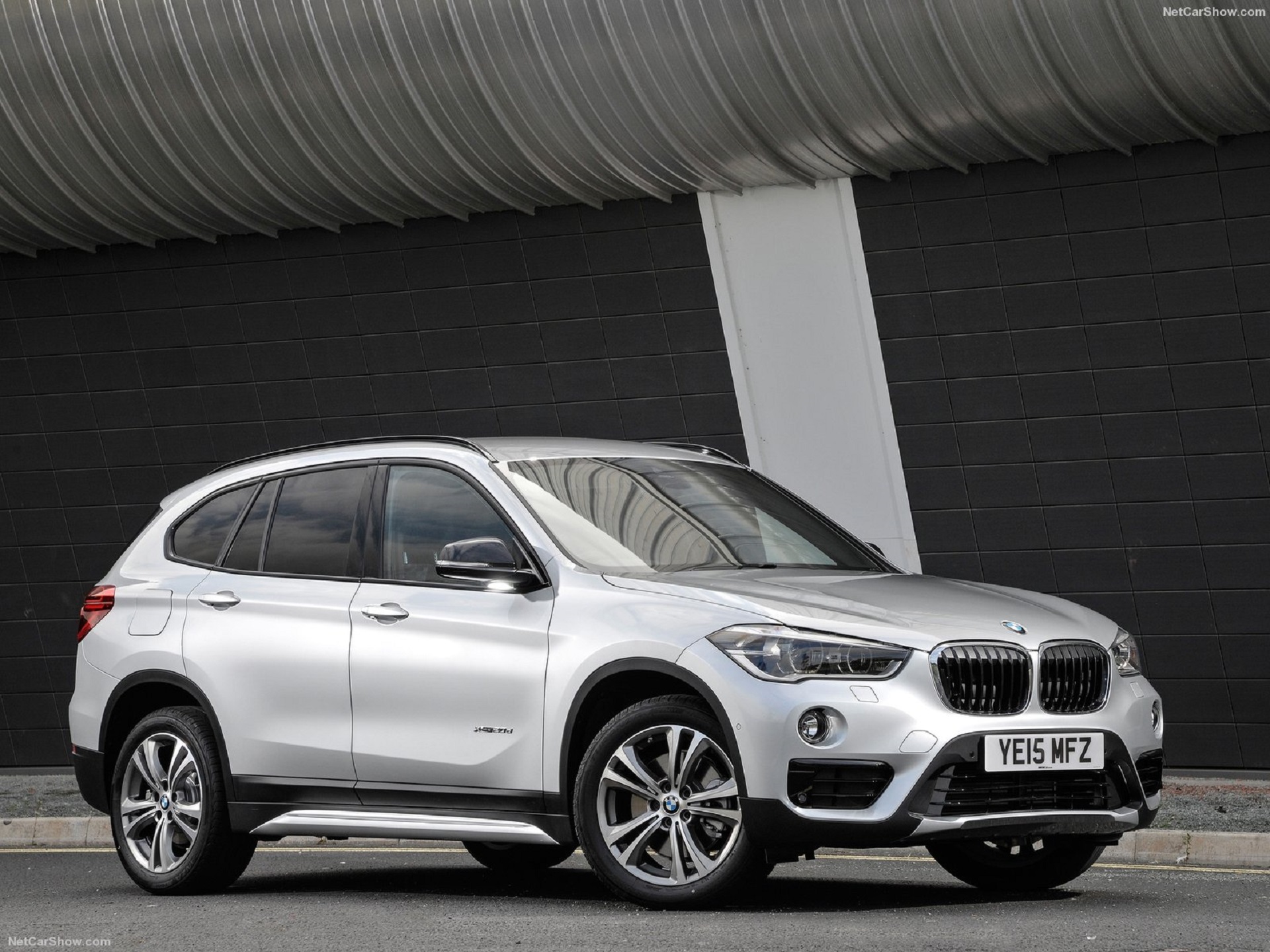 But, if you were after sharper looks and a more dynamic driving feel, perhaps the BMW X1 is more up your alley. It too has more power than the GLA180 in the basic sDrive 18i trim with 134 bhp, which isn't a huge increase admittedly. Still, you get the sharper driving characteristics that BMW is known for, all wrapped up in a practical body style and christened with BMW's signature Angel Eyes headlights. 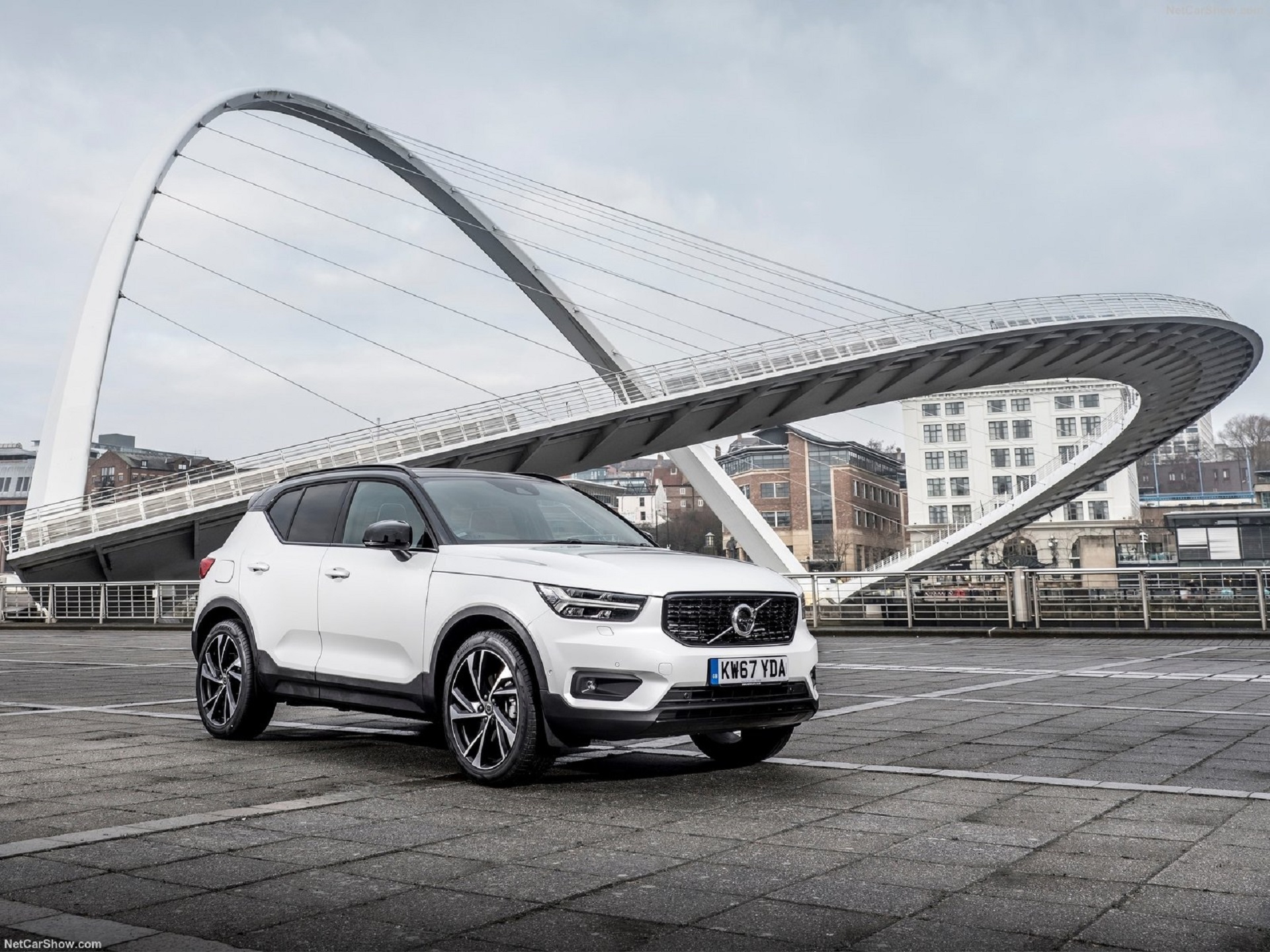 Still, you can't forget the Swedish and their sensible nature. The Volvo XC40 is built on Volvo's compact modular architecture, which was designed from the ground-up to maximise interior space. Not to mention, Volvo's legendary safety ratings, plus it is the most powerful out of the three cars listed here, with the T4 variant producing 187bhp, 62 more than the GLA180.

One could argue that the GLA-Class was created primarily to allow greater access to the Mercedes-Benz brand, how it is not a true Mercedes, and how it dilutes the brand's heritage and branding. Regardless, the GLA-Class has been a hit with consumers, not only in Singapore, but globally as well. For smaller families who don't require a ton of space, the GLA-Class makes a compelling choice for ownership. 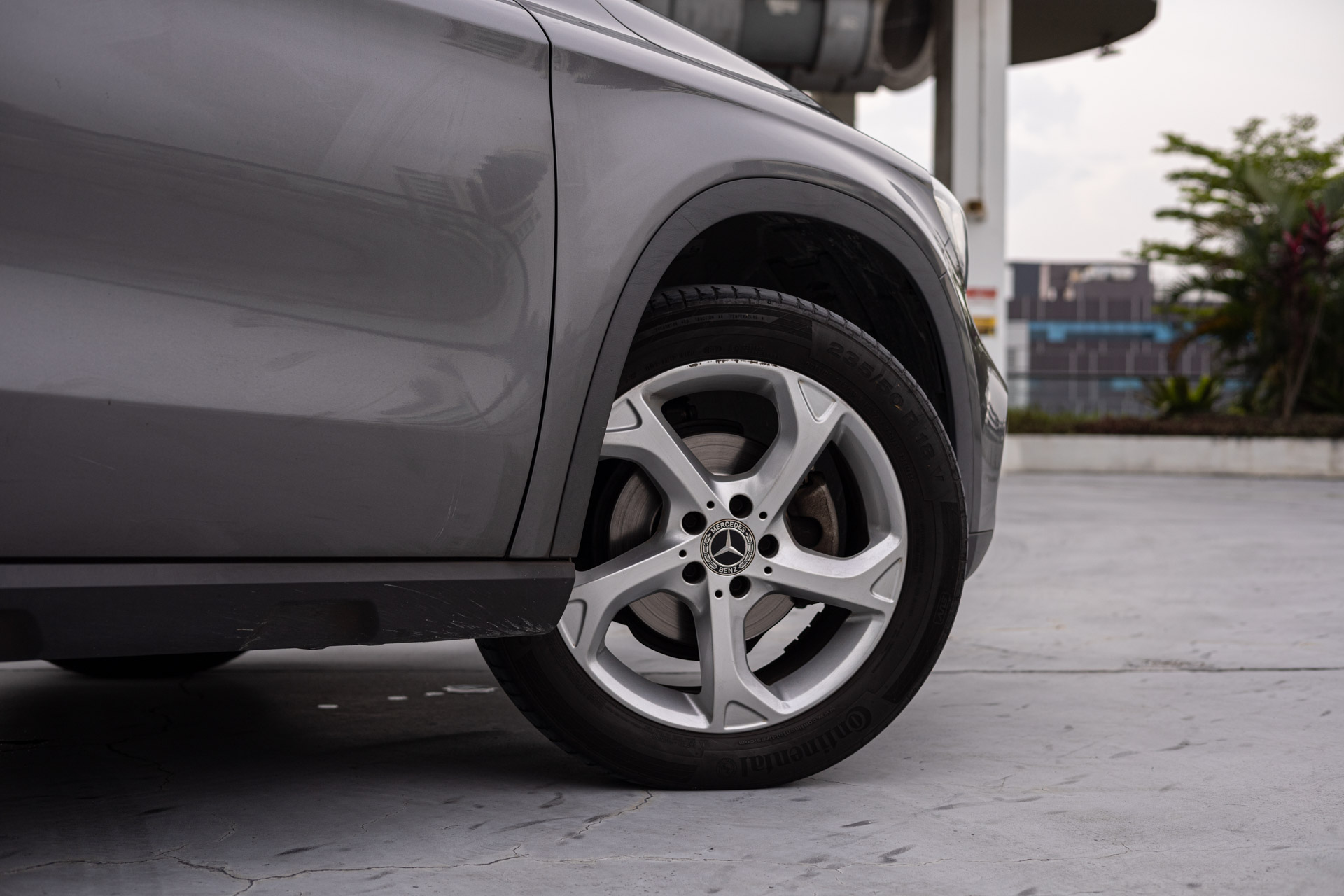 Being based on the A-Class, it was never going to win any beauty contests, considering how it looked slightly ungainly after being raised to convert it into a crossover. Still, it has proven its worth, with the first and second generation getting an AMG variant.

If you are keen on getting a Mercedes-Benz GLA-Class as your next car, or any other used car for that matter, do take a look at our used car selection here for some of the best deals!