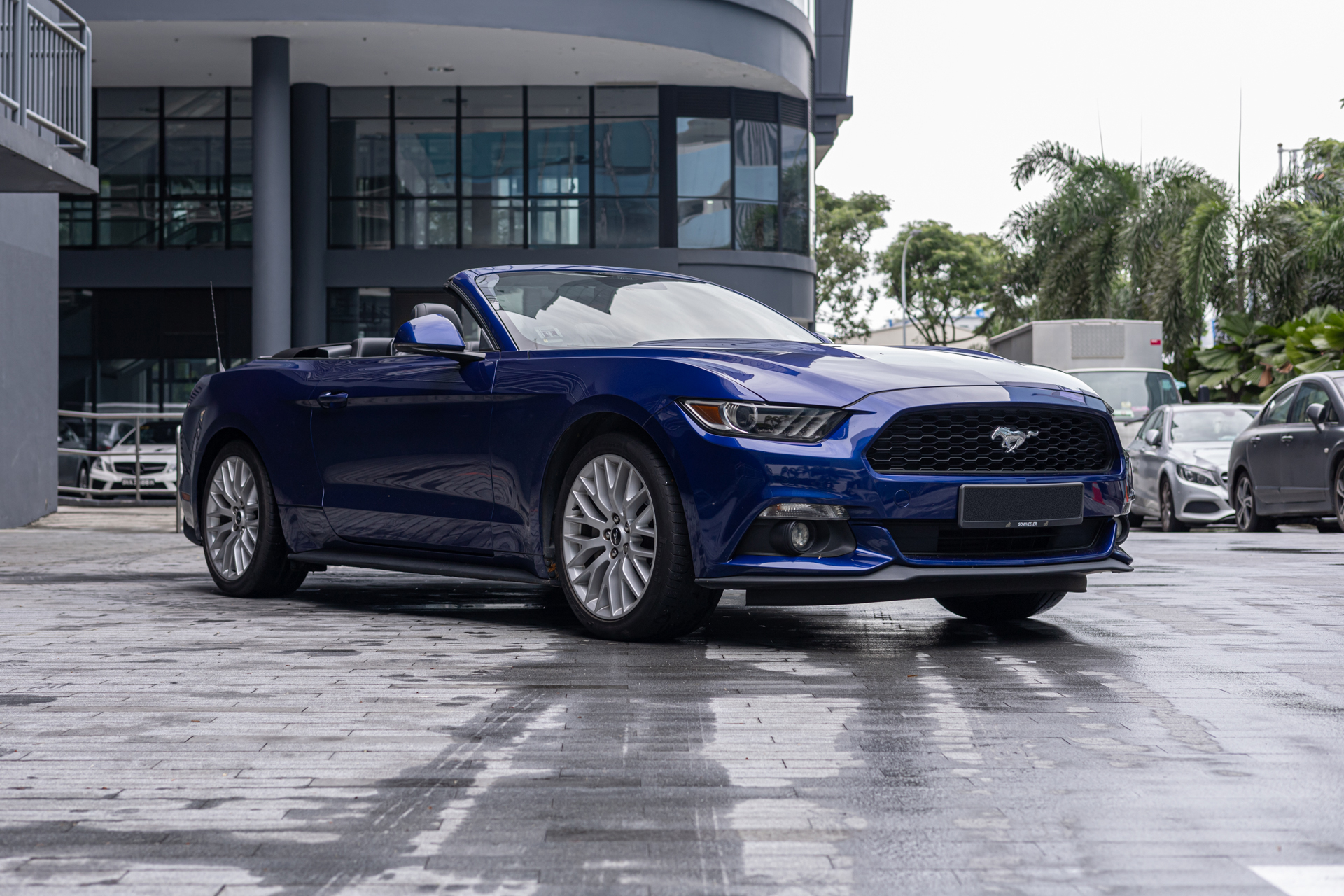 There are few American cars as iconic as the Ford Mustang. But did Ford commit a faux pas when they fitted a small capacity turbocharged engine to the current generation?

Since its inception in 1964, the Mustang quickly established itself as an icon, becoming the poster child for anything and everything Americana and American motor culture. Priced affordably, it proved to be a mass hit, with 1.3 million units produced in the first two years alone.

Over the years, popularity of the Mustang hardly wavered, even during the years the US was undergoing the oil crisis that forced manufacturers to severely dumb down horsepower numbers.

But with modern emission regulations becoming increasingly tighter with every passing year, the sixth generation launched with a four-cylinder engine (albeit turbocharged), something not seen in Mustang since the second generation Mustang of 1974. 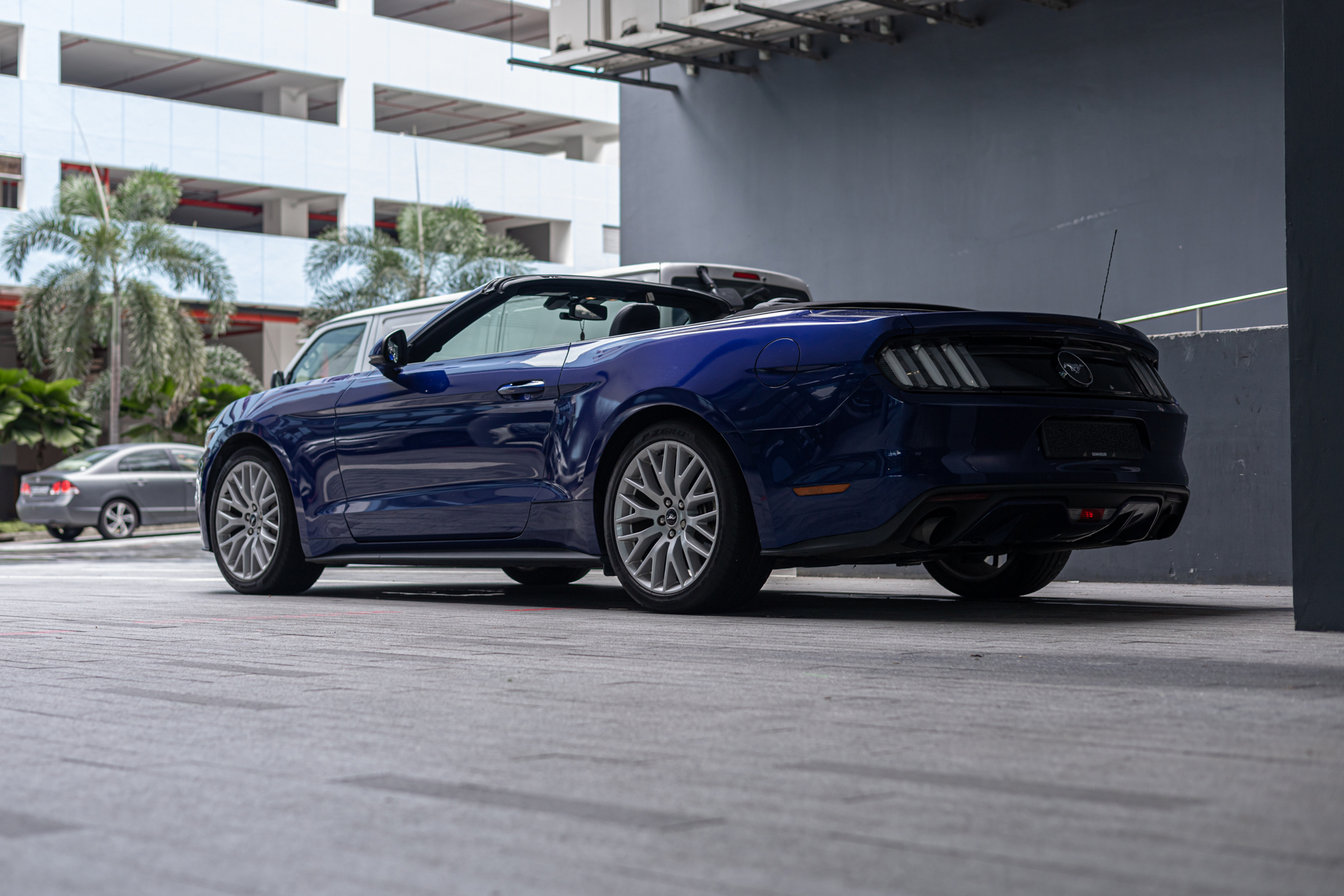 This is a 2018 Ford Mustang Ecoboost Convertible. Yes, Ecoboost, which means this has the turbocharged 2.3-litre four-cylinder engine, and not the 5.0-litre “Coyote” V8 engine in the Mustang GT.

Being a facelifted model, it gains a refreshed design with the front grille, bonnet and bonnet vents, as well as all-LED headlights and fog lights, which weren't present on the pre-facelift Mustang.

The interior was also updated with a 12-inch LCD display for the infotainment, with safety systems like Pre-Collision Assist with pedestrian detection, distance alert, lane-departure warning, lane-keeping assist and Driver Alert System introduced as well.

When the sixth generation Mustang was launched in 2014, it came with the aforementioned 2.3 and 5.0-litre options, as well as a 3.7-litre V6. The facelift eliminated the V6 engine and replaced the original six-speed automatic transmission with a 10-speed unit that was co-developed with General Motors. 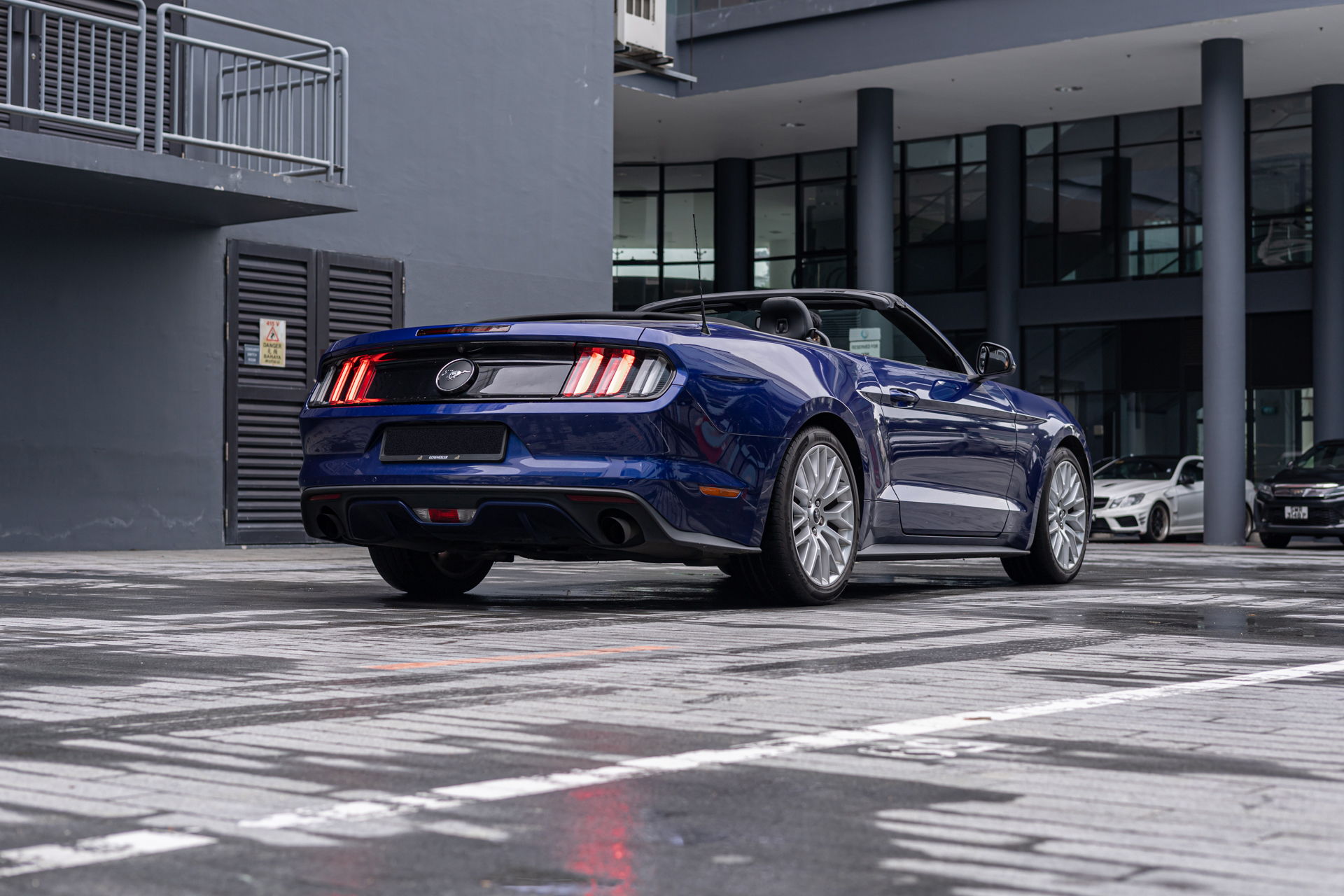 With its turbocharged 2.3-litre engine, power was rated at 313 horsepower and 432 Nm of torque, driving the rear wheels only via a 10-speed automatic transmission, with the century sprint accomplished in 5.5 seconds. Considering its weight of 1.7 tons and rear-wheel drive, that’s a relatively decent timing. Being a convertible, it will be heavier than the coupe, as torsional rigidity is reduced without a roof, and additional bracing has to be fitted to compensate.

There were criticisms of the Ecoboost Mustang not being a “real Mustang” with its small capacity turbocharged engine. However, dig into its history, and you’ll see that the second and third generation both had 2.3-litre engines (albeit naturally aspirated), with the third generation also having a turbocharged 2.3-litre four-cylinder engine. Granted, they’re not the Mustangs people identify with, but it’s proof that the Mustang did use smaller engines in the past.

With the 10-speed transmission and its taller ratios, fuel economy has improved, with expressway mileage being 12km/l on average, but tumbling to 8km/l when faced with city driving. This means a theoretical range of up to 700km on its 59 litre fuel tank, which is pretty decent.

The Ecoboost engine has mixed reactions with regards to reliability, with several problems being known. 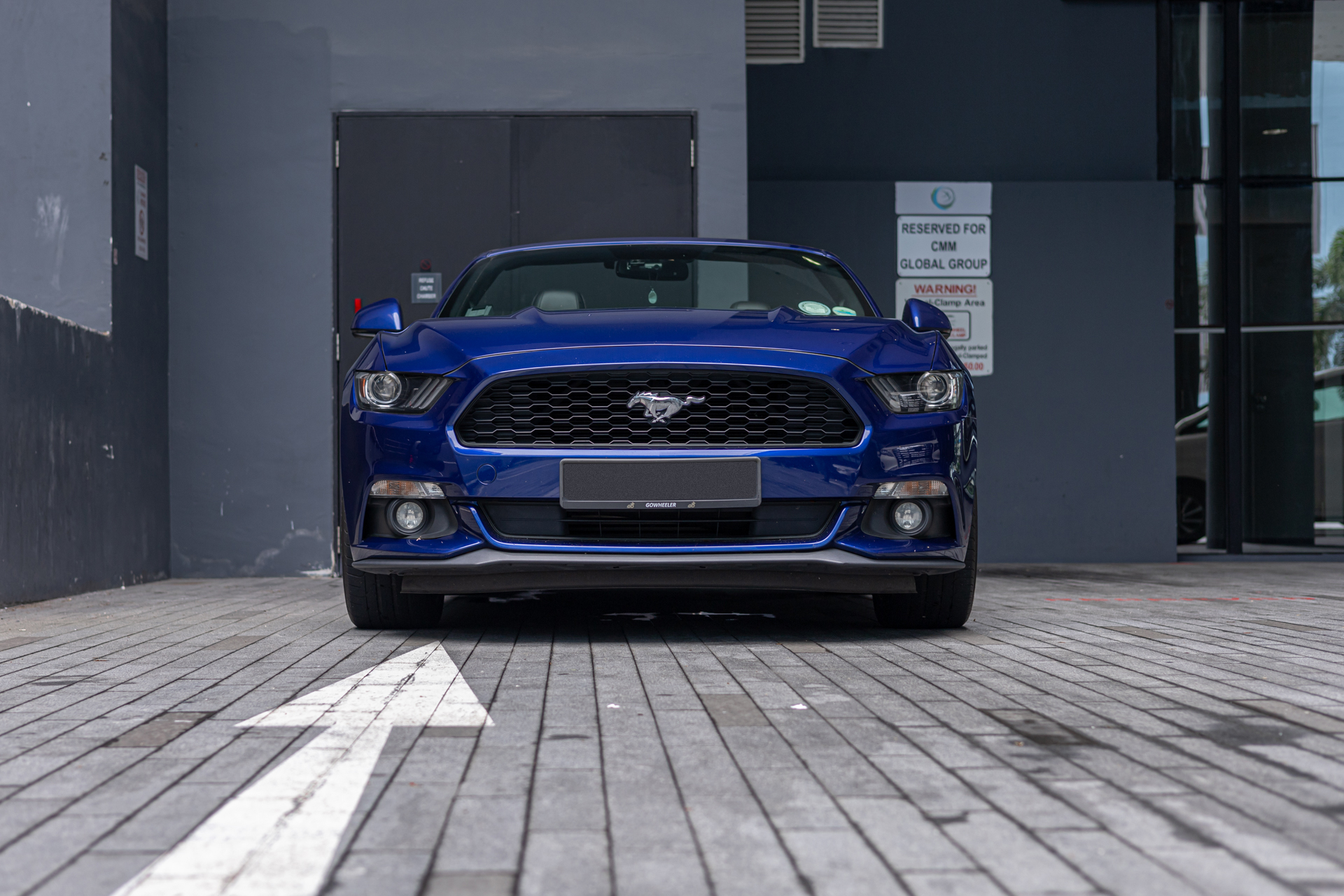 This engine runs hot, which could be a result of design, but it can also be due to leaking coolant lines and failing gaskets. If you face this issue, have the aforementioned parts replaced as an overheating engine is the last thing you want or need. Another solution would be to install additional heat shields or upgrade the radiator and/or intercooler for improved cooling, particularly in Singapore’s hot climate.

Being a direct injection engine, carbon buildup is also another common issue faced on the Mustang Ecoboost. Carbon deposits have a tendency to stick to the intake valves, which can result in rough idle, misfiring and a loss of power. It is advised to check the intake valves every 100,000km and have them cleaned or walnut blasted as per necessary.

Earlier units of the Mustang Ecoboost were known to have head gasket failure issues. While this problem was fixed by Ford through recalls, it is still advisable to check your car for any signs of head gasket issues, and to rectify it as necessary. 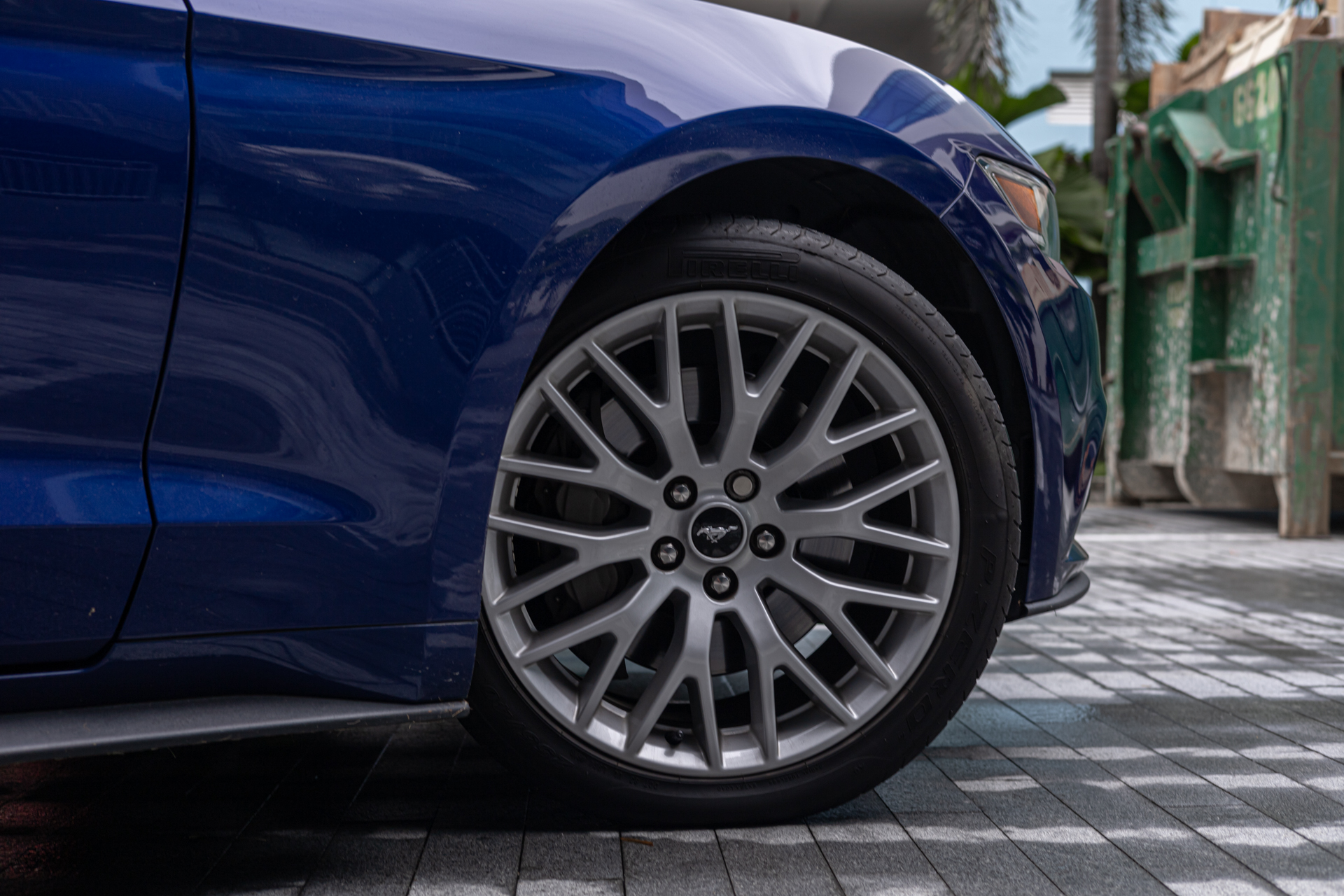 Overall, the 2.3-litre engine has decent reliability, and with Ford putting it in so many models, any problems faced should be easy to diagnose as it may very well have been encountered by others before.

Strangely enough, the Mustang Ecoboost Convertible is classified as a 2+2, which means it has four seats. One look at the back seats will tell you that the only passengers fitting back there are young children, because there is virtually no legroom for any normal sized human once the front seats are adjusted to a comfortable position.

In any case, just use the back seats as they truly are intended for; a place for soft bags, small luggage or some groceries. 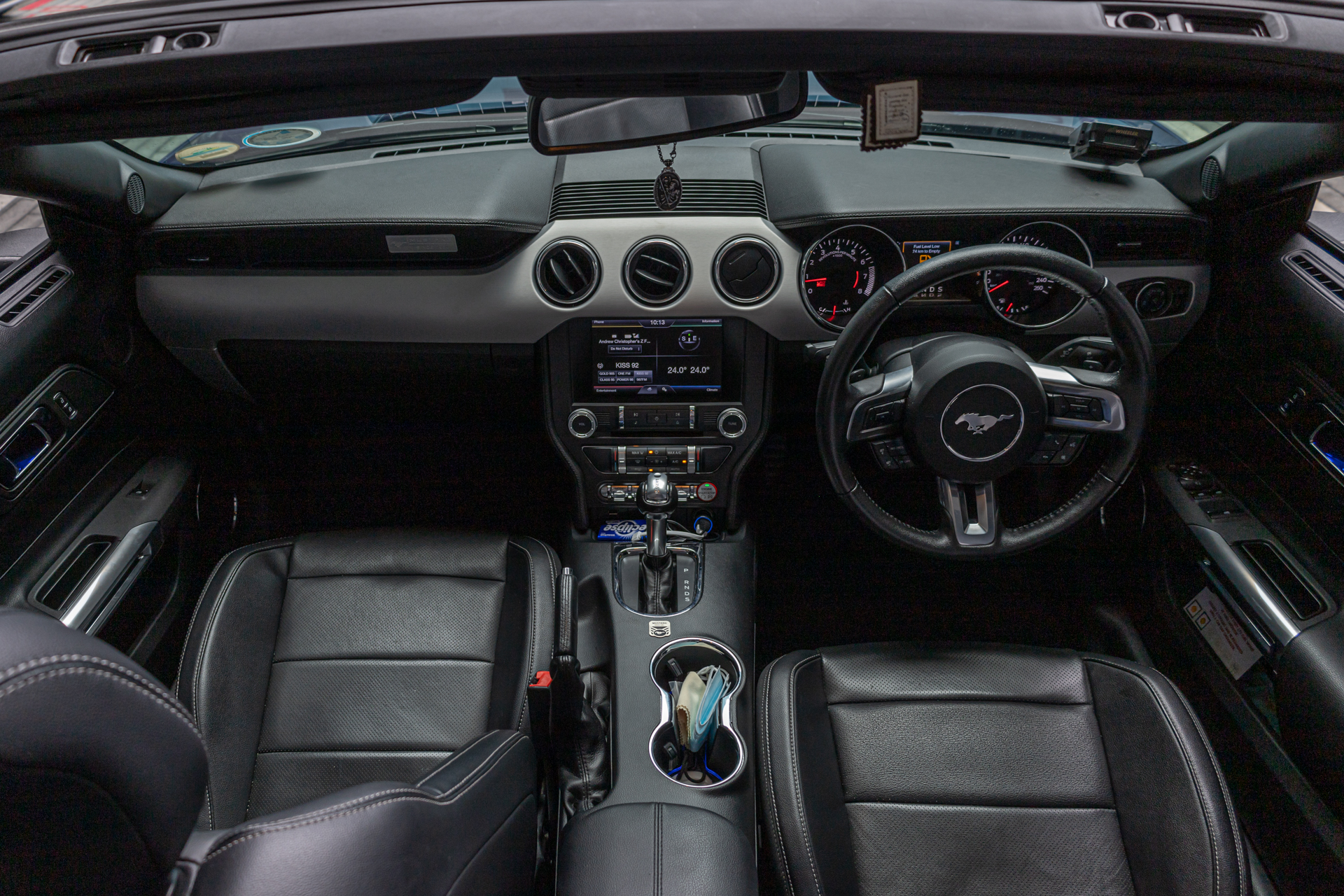 The front seats are a pair of sporty-ish seats with some bolstering (not much, if we’re being honest) and are trimmed in black leather, matching the interior, which is a mix of black leather for the dashboard and a combination of black leather and plastics for the doors. Brushed aluminium trim pieces provide a contrast of colour to an otherwise dark cabin.

Thankfully, there is an actual manual handbrake, which enthusiasts still prefer for that analogue feel. This analogue touch is further seen in the gauge cluster’s retro design, with the speedometer and tachometer nestled deep within, complemented by a small digital display showing the odometer, trip computer and other pertinent information. 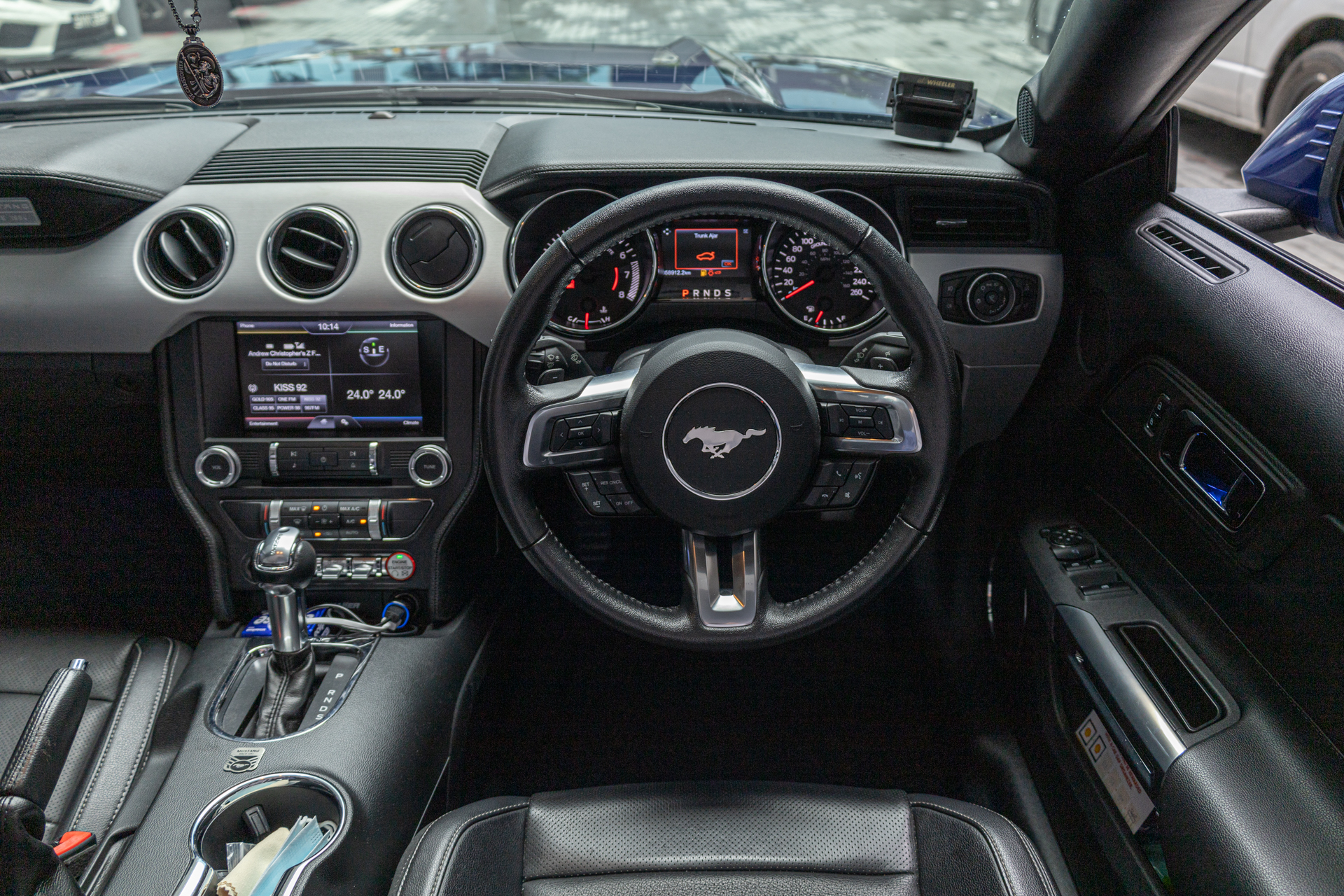 The controls for the HVAC system are physical buttons and knobs, which makes for easy adjustment of temperature and fan speed even while on the move. There are also physical buttons to control the media player, which is not something that is commonly seen nowadays.

As an interesting touch, the controls for the hazard lights, start-stop system, traction control and performance modes are fashioned after airplane switches, and have a pleasant tactile feel to them when engaged.

With a boot capacity of 332 litres, this is the same regardless if the roof is up or down. This is commendable design and engineering, for convertibles usually have more boot space when the roof is up, and less when it is down, as the roof (when folded) eats into boot space. 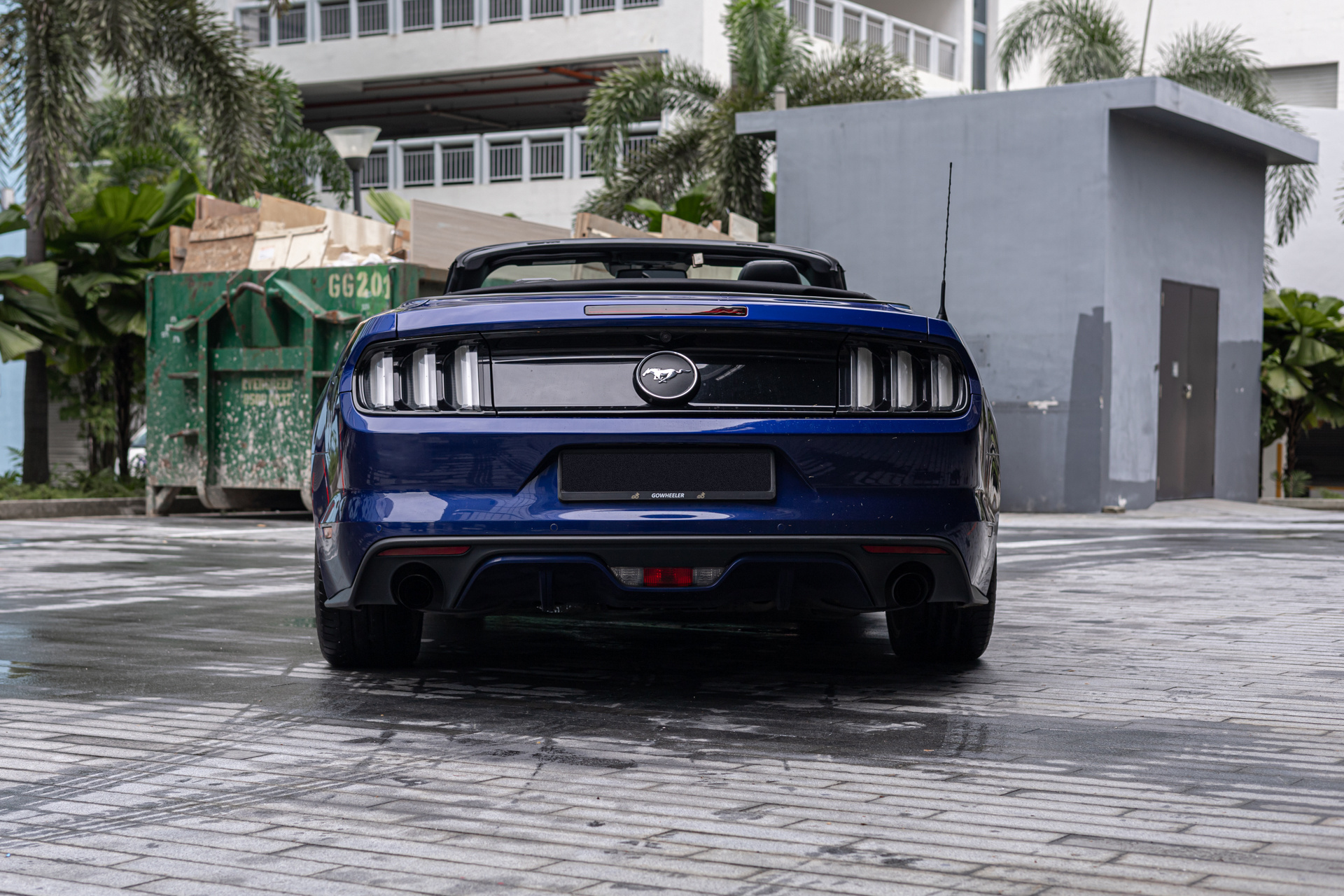 And as mentioned earlier, the rear seats can also be used to place smaller bags or soft bags, freeing up space in the boot for bigger items like large pieces of luggage. Still, don’t expect to fit a golf bag into the boot as it is unlikely to fit. The rear seats can be folded flat to provide through access to the cabin and to increase the boot capacity, which is useful if more items or oversized objects need to be transported. 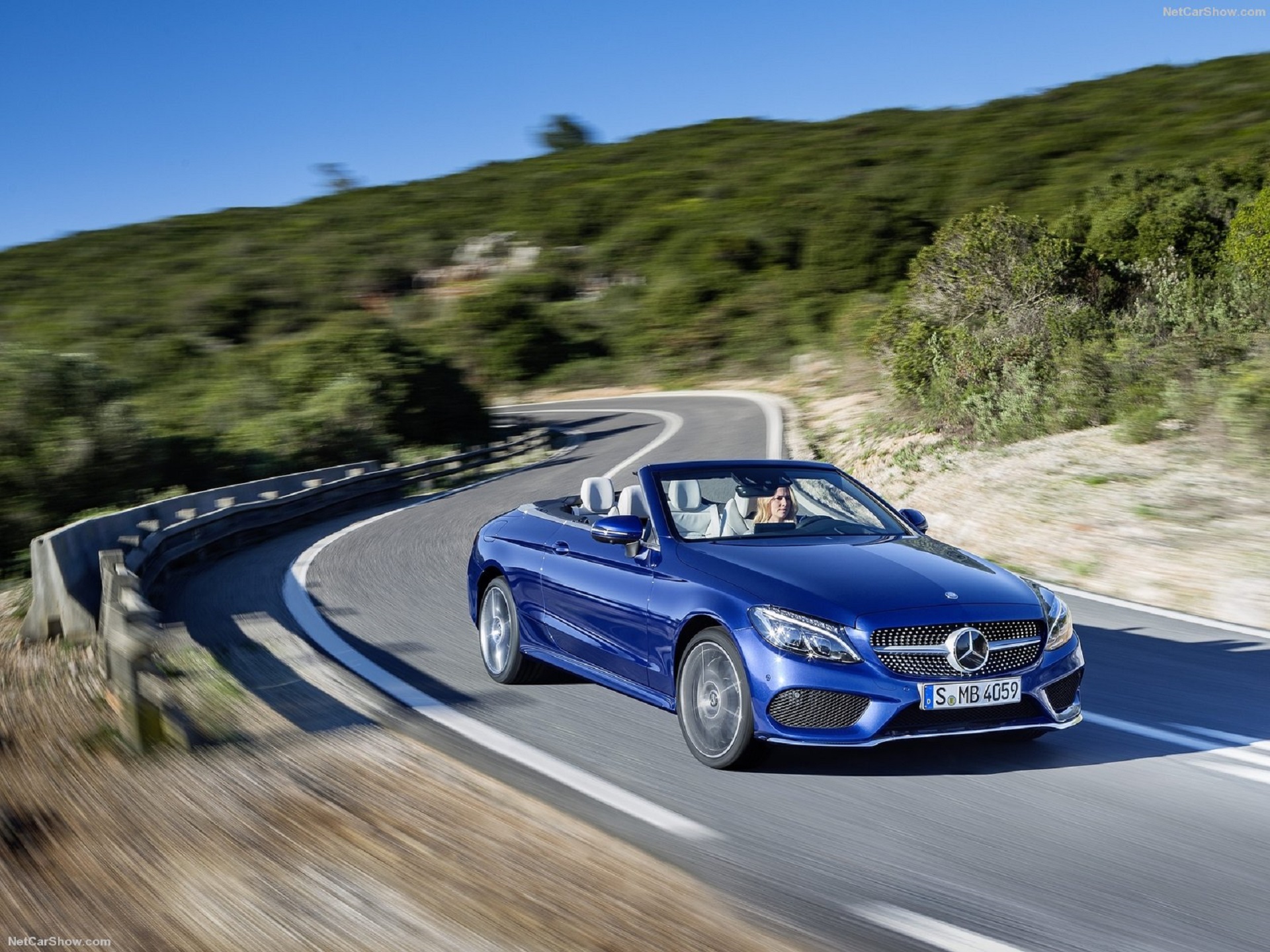 For the Singapore market, the Mustang’s traditional rival, the Chevrolet Camaro (and its convertible variant) isn’t available in Singapore as it is left-hand drive only. 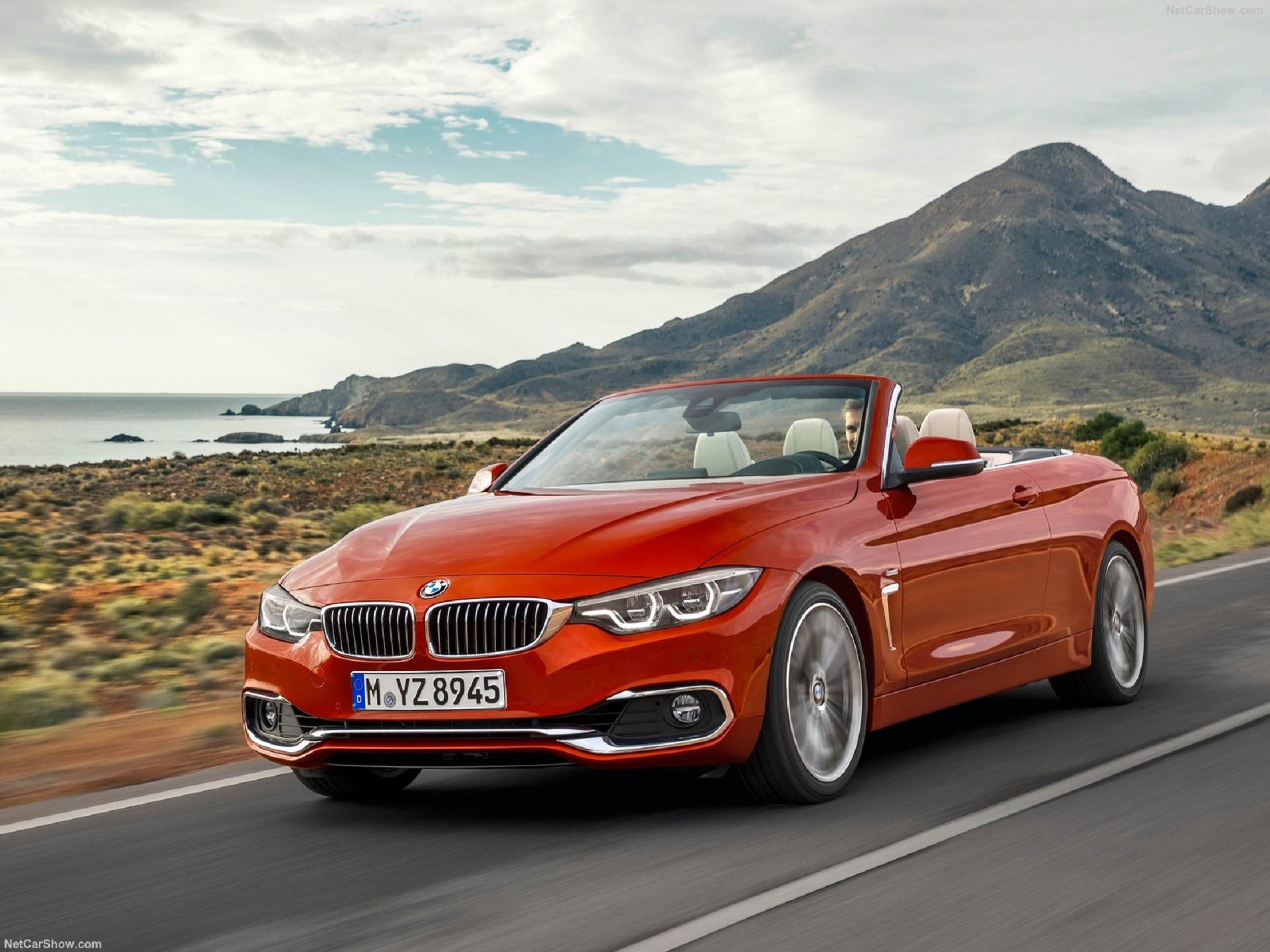 Thus, the Germans stepped in to fill the void, with the Mercedes-Benz C-Class Cabriolet, Audi A5 Cabriolet and BMW 4 Series Convertible taking the fight to the Americans. 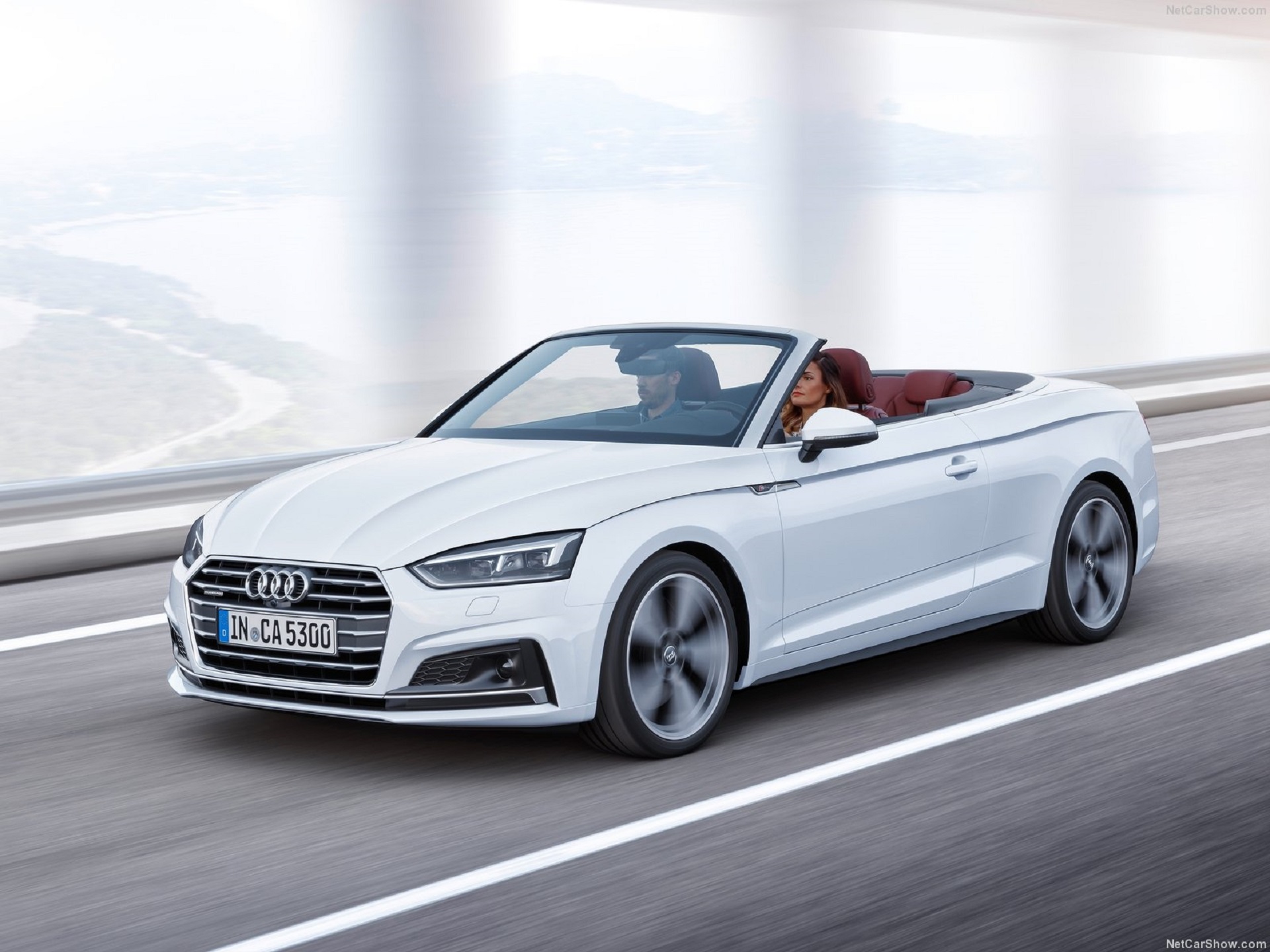 With the exception of the Audi, which was only available with a maximum of 250 horsepower, the BMW and Mercedes-Benz were available with multiple engine options and power levels that were similar to the topless Mustang, culminating in the top dog M4 Convertible and C63 AMG Cabriolet, and taking the fight straight to the 5.0-litre Mustang.

The Mustang will always be associated with the burbling V8 engine, as that is the icon that has been known and loved since its inception. But, times change, and so have consumer tastes, and most modern consumers want their vehicles to have good fuel efficiency, even if it's a performance vehicle.

You could say that it is a relic stuck in the modern era, with its retro aesthetic, brash character and that "look at me" bravado, but it is so much more than that. The modern Mustang is the best of both worlds, marrying classic design with contemporary ideology, one that has proven its popularity with customers since 1964.

With Ford announcing it will only produce SUVs and the Mustang for the US, as well as cutting back on non-SUV models for the European market, the Mustang could become a more desirable model in years to come, and this effect could very well trickle down to older Mustangs like this one, but only time will tell.

If you are keen on getting a Ford Mustang as your next car, or any other used car for that matter, do take a look at our used car selection here for some of the best deals!