Singapore Netizens on the Hunt for Inconsiderate Mercedes Driver 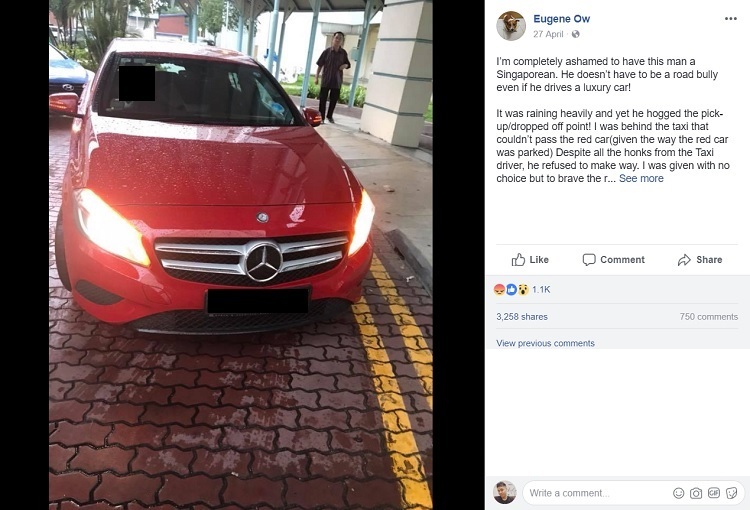 A Mercedes driver has incurred the wrath of Singapore netizens after refusing to give way to a fellow driver and his elderly father.


Another day, another act of online vigilantism. This latest dispute took place last Friday and it involves a driver of a red Mercedes.


Shared in a Facebook post by a Mr Eugene Ow, the driver of the red Mercedes allegedly refused to make way for other vehicles by blocking the path at a sheltered drop-off point.

According to Mr Ow, it was raining heavily, and he wanted to drop his elderly father off at the sheltered area.

Mr Ow, who was waiting behind the taxi, decided to approach the red car to make a request for him to make a loop to allow the taxi and himself to drop off their passengers.

However, Mr Ow alleged that the Mercedes driver didn’t even wind down his window when he approached his car. Instead, he made a gesture with his finger, telling Mr Ow to use his brain and alight his father without getting him wet.

To prevent further conflict, Mr Ow decided to reverse his car into the drop-off point via the exit. Upon seeing this, the Mercedes driver wound down his window and started recording Mr Ow’s action. He even threatened to report Mr Ow to the Land Transport Authority (LTA) and Traffic Police for dangerous driving.

Mr Ow concludes his post with a picture of the red Mercedes, the driver, as well as the license plate. Since its publication, the Facebook post has been shared over 3,200 times with over 744 comments.

Some Facebook users likened the red Mercedes driver to the driver of the BMW from the Caltex incident. While others have condemned the driver for his inconsiderate and selfish behaviour.

One thing is for certain though, Singapore netizens won’t let up until the identity of the Mercedes driver has been found.

What are your thoughts on the matter? Let us know in the comments below.

Read more: The Infamous BMW from the Caltex Incident is Now Up for Sale Online