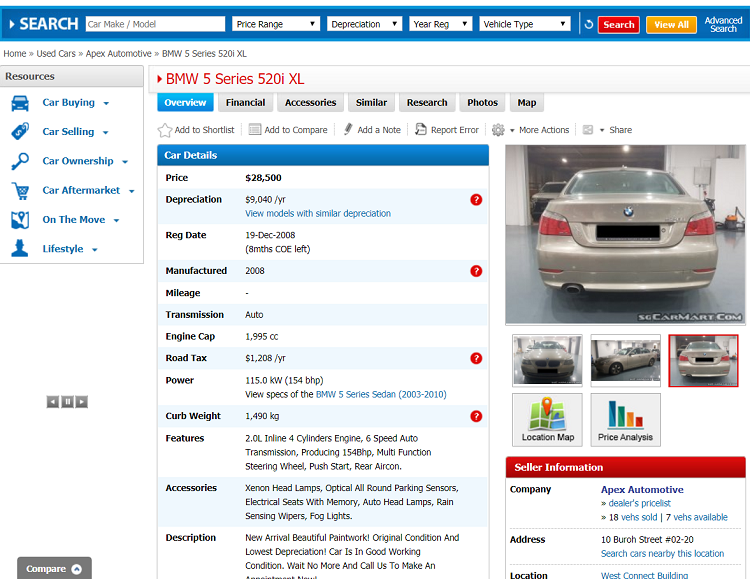 The infamous BMW from the Caltex incident has gone up for sale on vehicle classified platform, sgCarMart.


For those unaware, the BMW and its owner were previously embroiled in a controversial dispute at Caltex Tampines over the weekend.

The dispute arose after the driver requested an elderly pump attendant to fill his car with S$10 of petrol. However, when the driver went to pay for his fuel, he discovered that the attendant had pumped a full tank of gas, amounting to $135.

Since he only requested for $10 worth of petrol, the driver refused to pay the remaining amount. To avoid causing a scene, the pump attendant agreed to cover the balance from his own pocket.

This event was captured by Facebook user Kelly Yeo, who then shared the story on the social media platform. Her post immediately went viral, with netizens up in arms over the conduct of the driver.

Besides flaming him, some netizens also dug up his personal details and shared them online. A Facebook group was even formed with the sole purpose to “hunt this scumbag down" and "teach him an evil lesson".

Fearing for the safety of his family, a police report was filed by the BMW driver. He also claimed that the reason why he only wanted $10 of petrol was because he was on his way to trade in his car and only needed enough petrol to drive to the trader.

Well, it turns out his claim was true as a listing for the BMW has appeared on sgCarMart. Selling for $28,500, the BMW 5 Series 520i XL has 8 months of COE left.

Although his words hold true, netizens are still upset over his nonchalant and uncaring behaviour over the matter. It also seems that they won’t stop with the witch hunt until he publicly apologizes.


What are your thoughts on the entire situation? Also, will you be interested in making a bid for this “iconic” car? Let us know your thoughts in the comments below.

Read more: Ask These 6 Questions Before Buying a Used Car