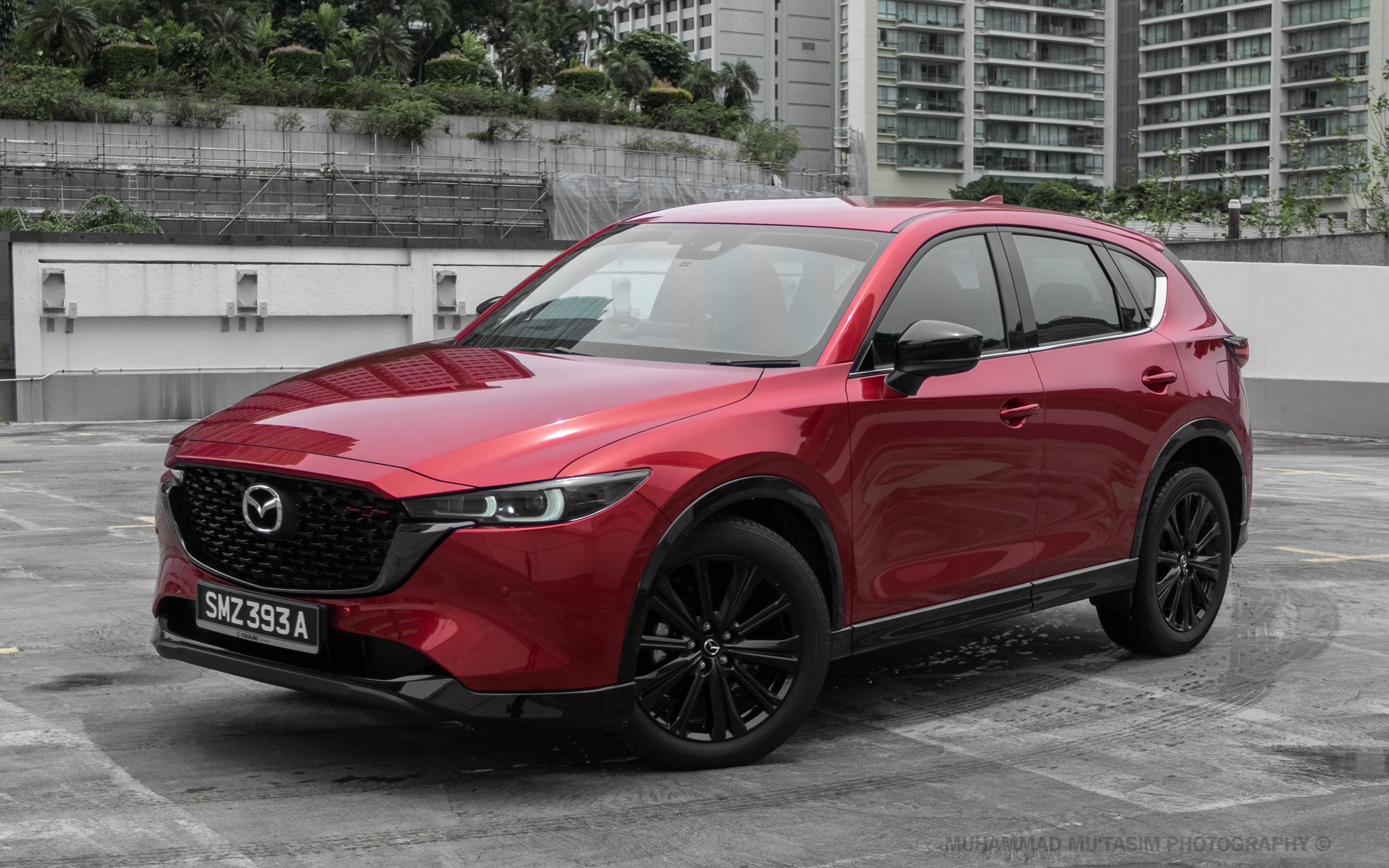 As a seasoned watch aficionado, I have an almost-obsessive love towards Seiko. Best known for kicking some sweet Swiss derrière since the 1960s, their timepieces are never short on premium designs, fully in-house accurate mechanical movements, and unbeatable price tags.

The logic for the consumer is simple, then: why spend absurd amounts of money on a fancy European product when a Japanese manufacturer can deliver similar levels of refinement for a fraction of the price? It worked for Seiko, and they have enjoyed a loyal enthusiast base the world over ever since.

And I reckon it’s the same with Mazda here, with their refreshed CX-5. Just look at it. With curvatures to die for and a colour palette that oozes sophistication, you’d be forgiven for thinking this was an offering from a carmaker that’s far higher up the totem pole. 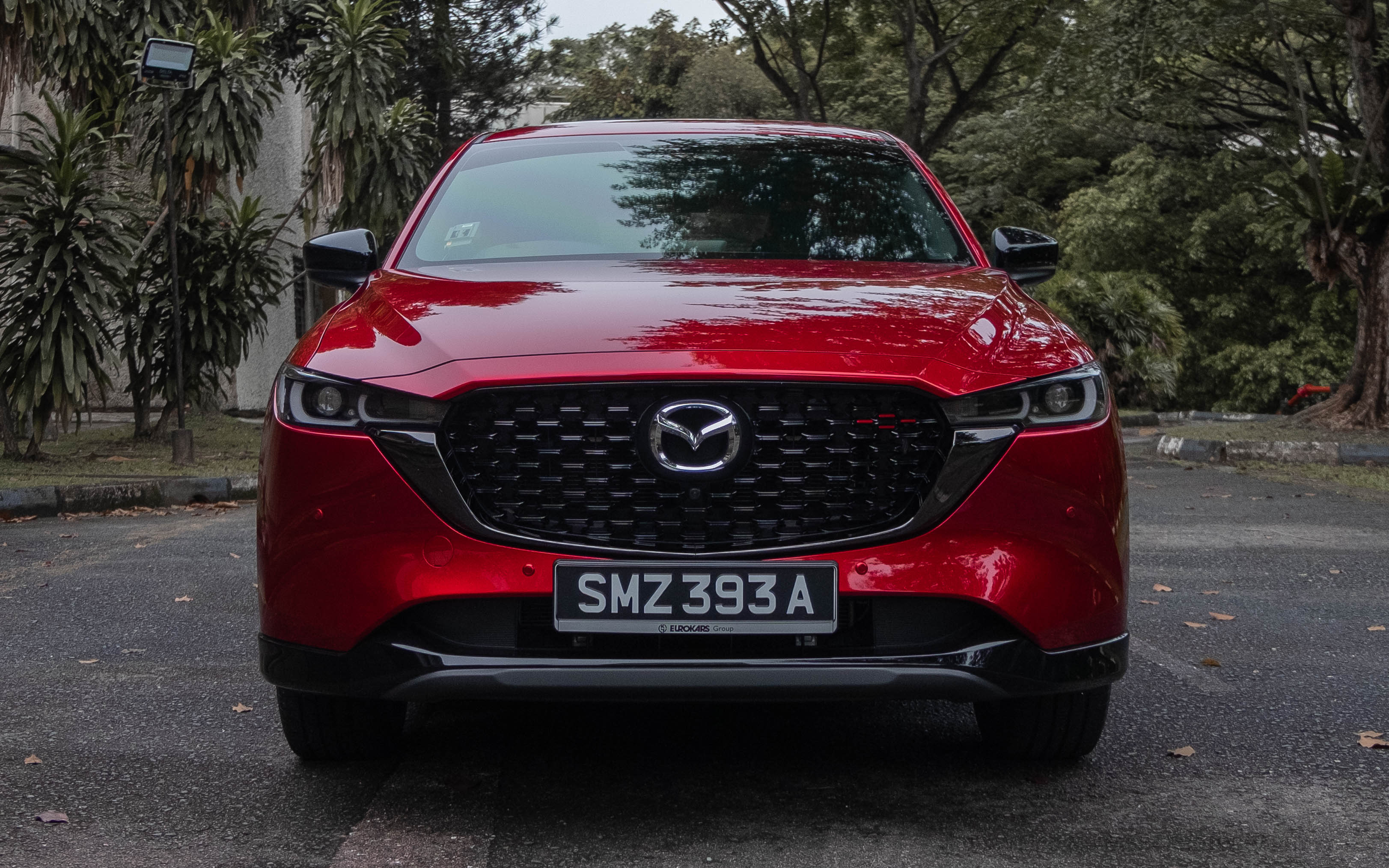 What's different on this mid-cycle facelift model, then?

Apart from very subtle visual enhancements that are not immediately identifiable to the average man on the street, Mazda is sticking to its critically acclaimed Kodo design language, and I appreciate the carmaker for this.

The front and rear bumpers have been mildly reworked and now look arguably even more concept car-like than ever before, with sharper unbroken lines and creases throughout. The original pre-facelift design was already a winner to begin with, so these incremental upgrades just make the CX-5 an even more enticing prospect. 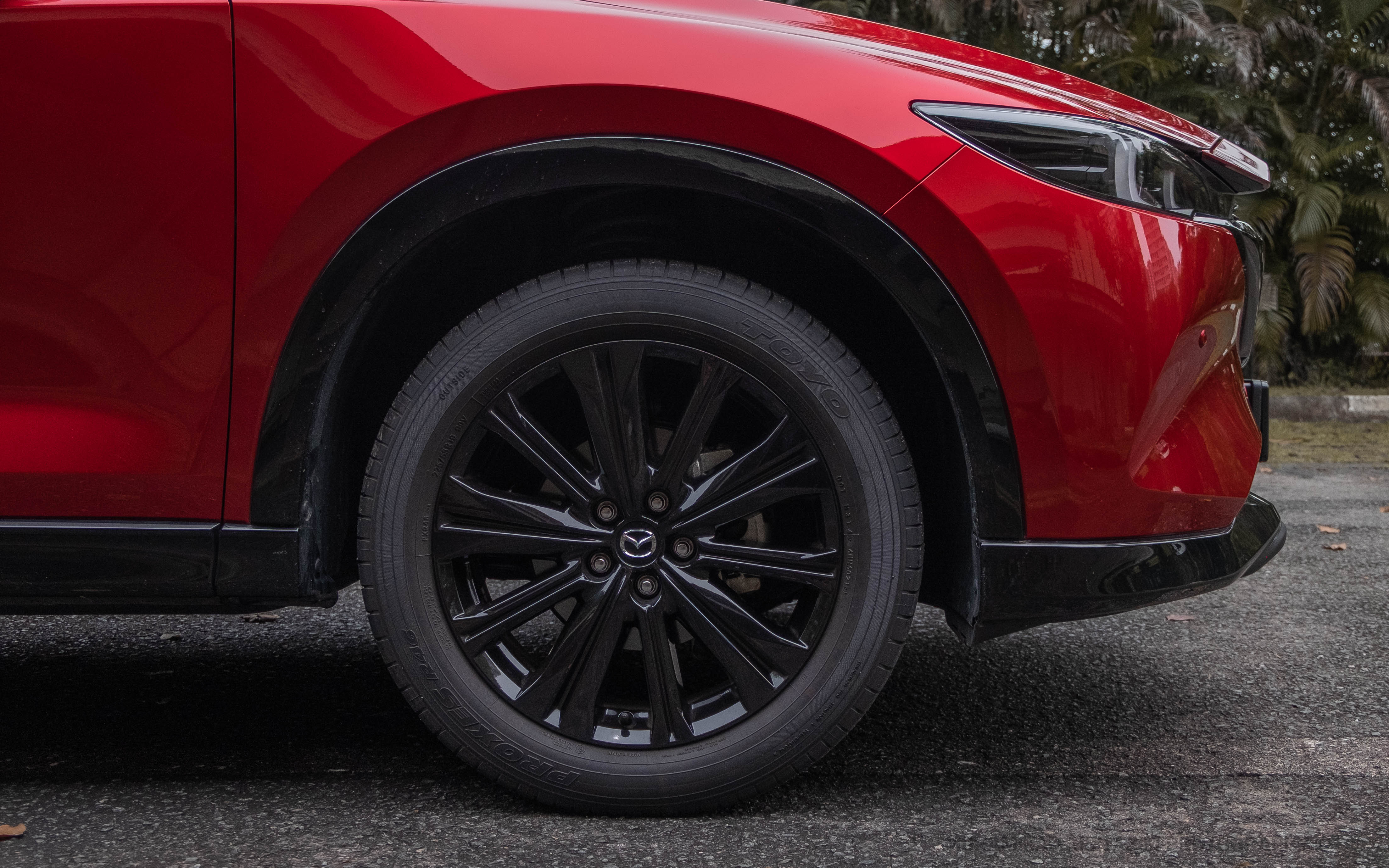 The LED light clusters, too, have done away with the circular elements in favour of new L-shaped ones. I particularly love the dark chrome-effect grille bar and gloss honeycomb grille, both of which give the CX-5 a much more menacing front profile.

Eagle-eyed observers will also notice that red accents are present on the top right of the grille, denoting its Sports Luxury trim level. The mid-tier Luxury trim does away with them, while the entry-level Elegance sports a matte-finish grille with lime green accents. 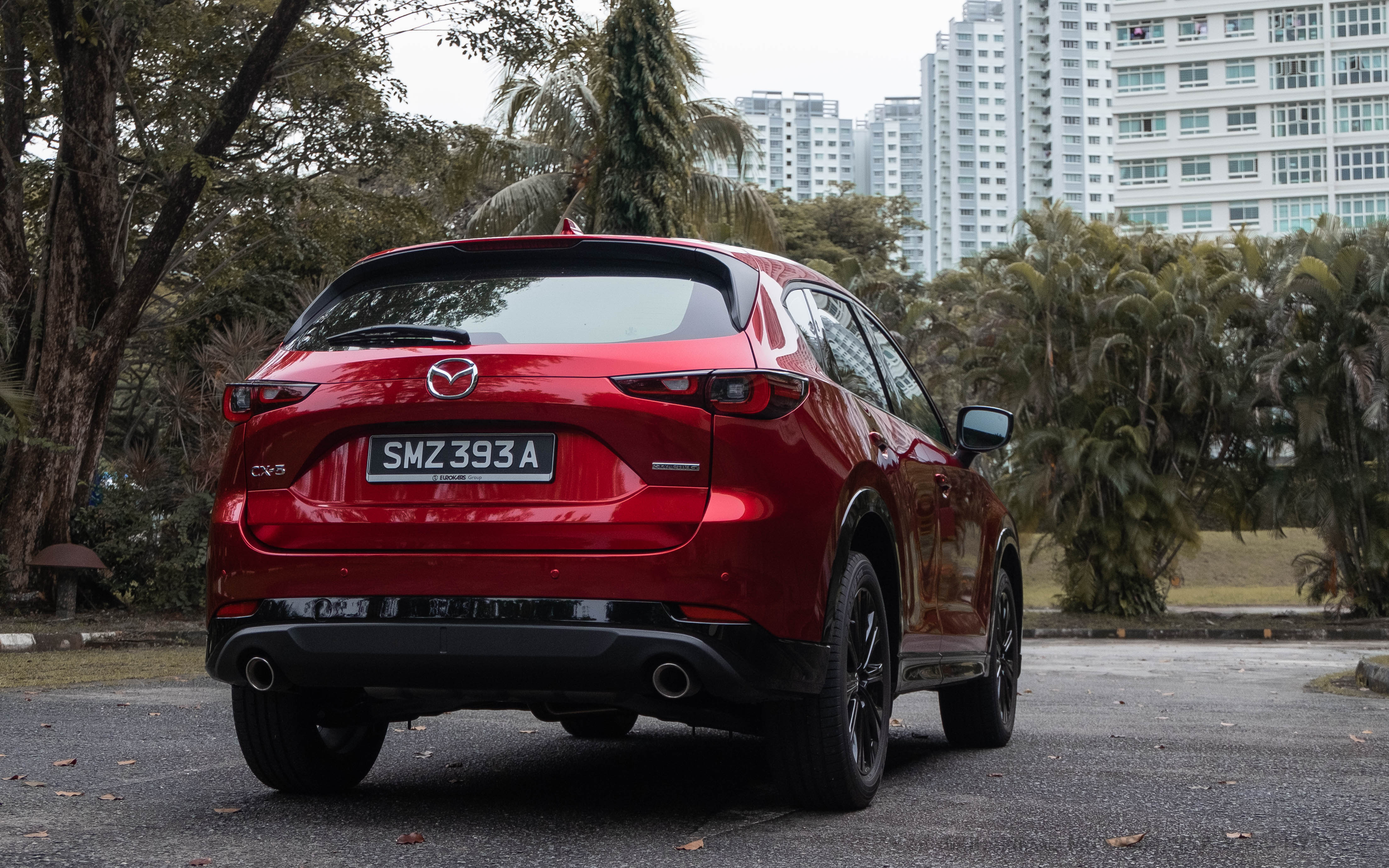 Mazda has also graced their refreshed bestseller with new wheel options. This Sports Luxury model comes with 225/65 R19 Toyo Proxes R46 rubber and 19-inch aluminium wheels in black metallic, the latter of which contrast well with the rest of the vehicle. This is especially the case with Mazda's now-iconic Soul Red Crystal Metallic, found on our test car.

Luxury Without the Baggage 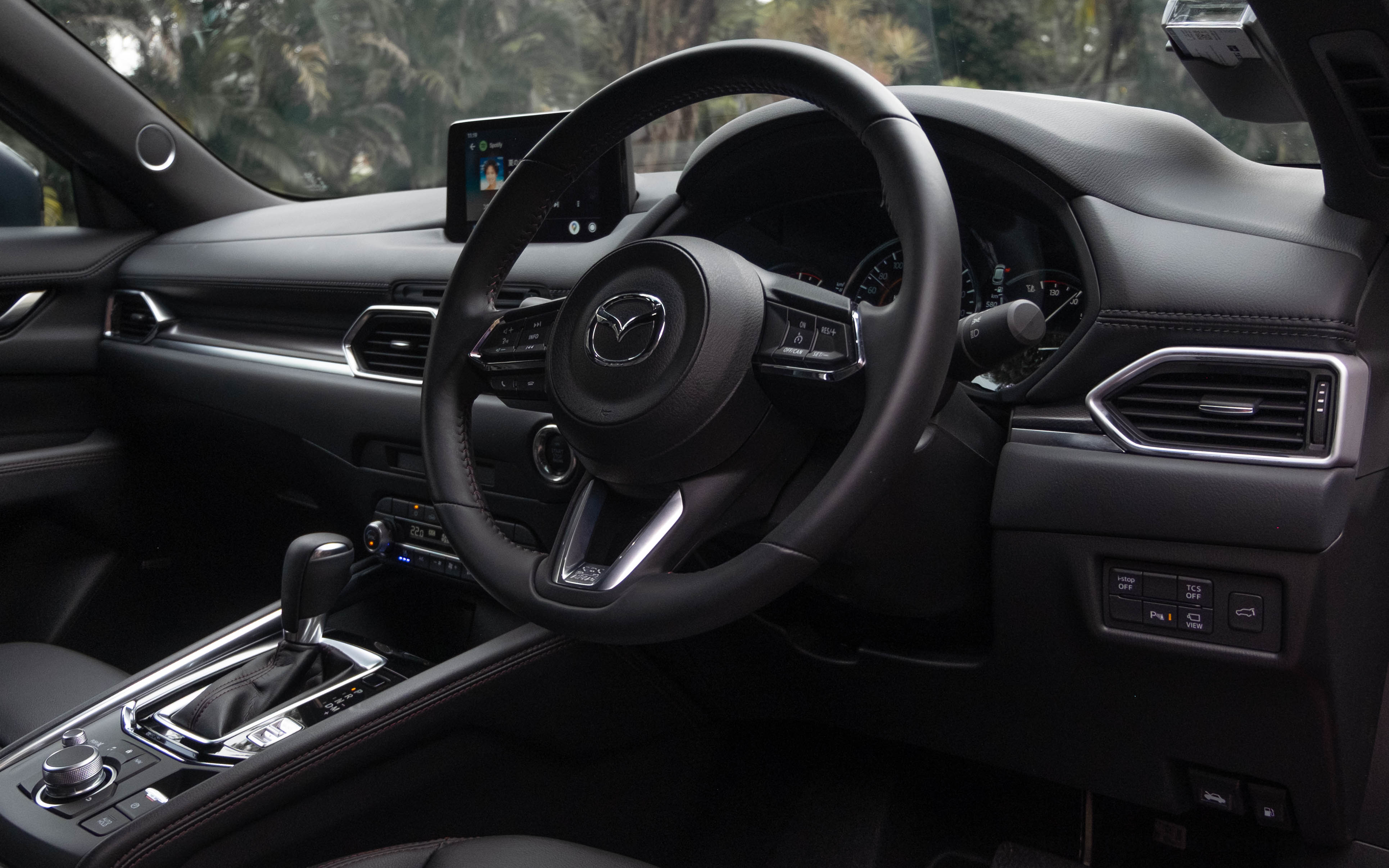 Expect nothing but premium goodness once you step inside the CX-5. It is festooned with soft-touch materials at all the right touch points, unlike many of its Japanese contemporaries.

You get genuine leather upholstery (leatherette if you opt for the Elegance trim), satin chrome trim pieces, and red stitching. It has to be said, though, that the cabin colour only comes in black, which makes it visually tighter than it really is.

One design element that I absolutely love is the open space between the foot rest and the brake pedal. Unlike most other cars where my left leg is permanently bent when resting on the...er foot rest, I'm able to fully stretch it out in the CX-5, which means less aches to deal with after a long drive. 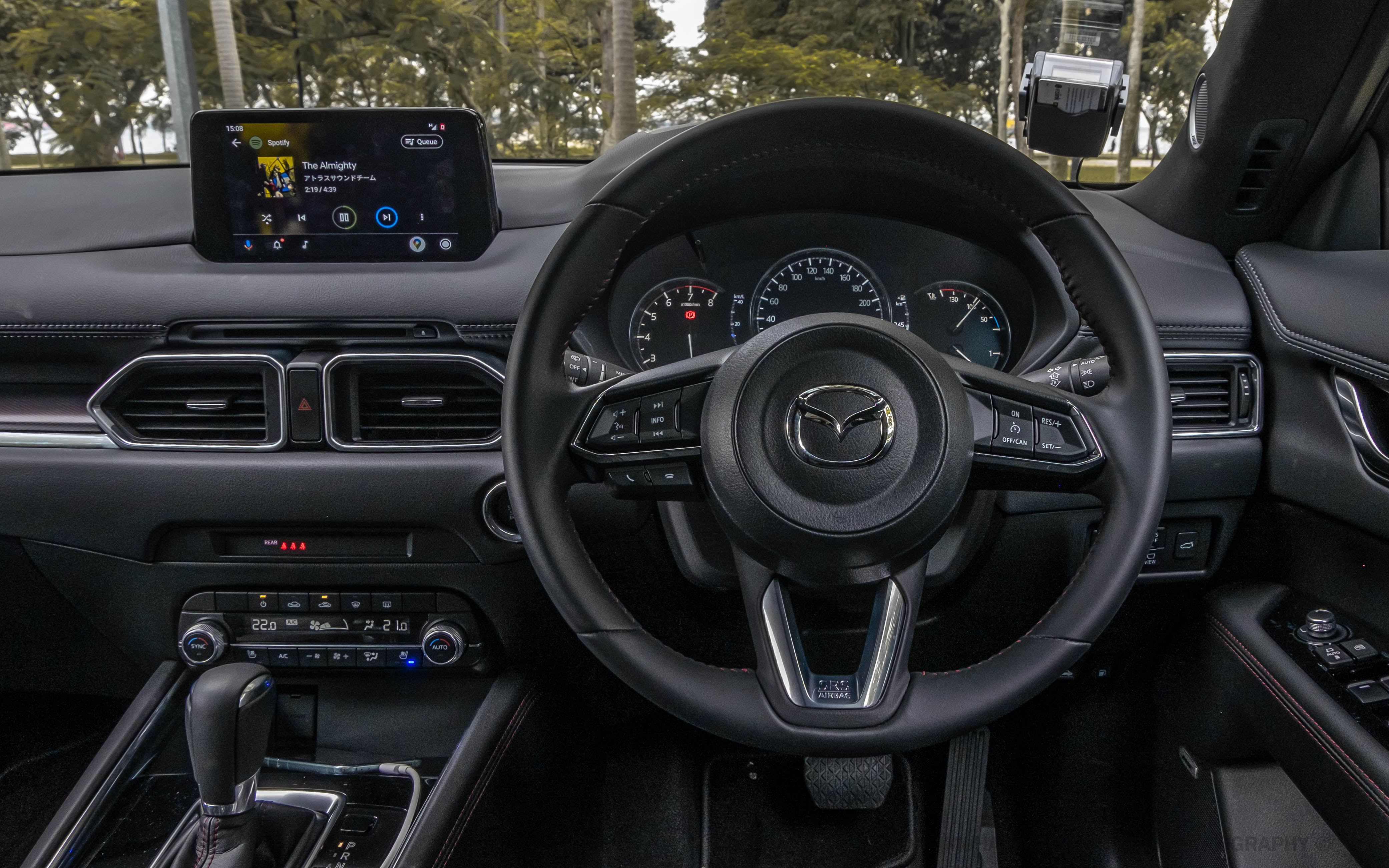 Much like the Forester that I reviewed recently, the CX-5 features plenty of physical and intuitively-placed switchgear for key controls, which I approve of. All-round visibility is excellent too, and you even get a head-up display that shows your travelling speed among other critical information.

It's not all good news, however.

The dashboard-mounted infotainment system looks and feels archaic to be honest, with a UI that is in need of a proper refresh. In addition, the screen's controls are limited to a dial on the centre console whenever the car's in motion. With that said, the screen is still responsive by modern standards, and any lag experienced is minimal. 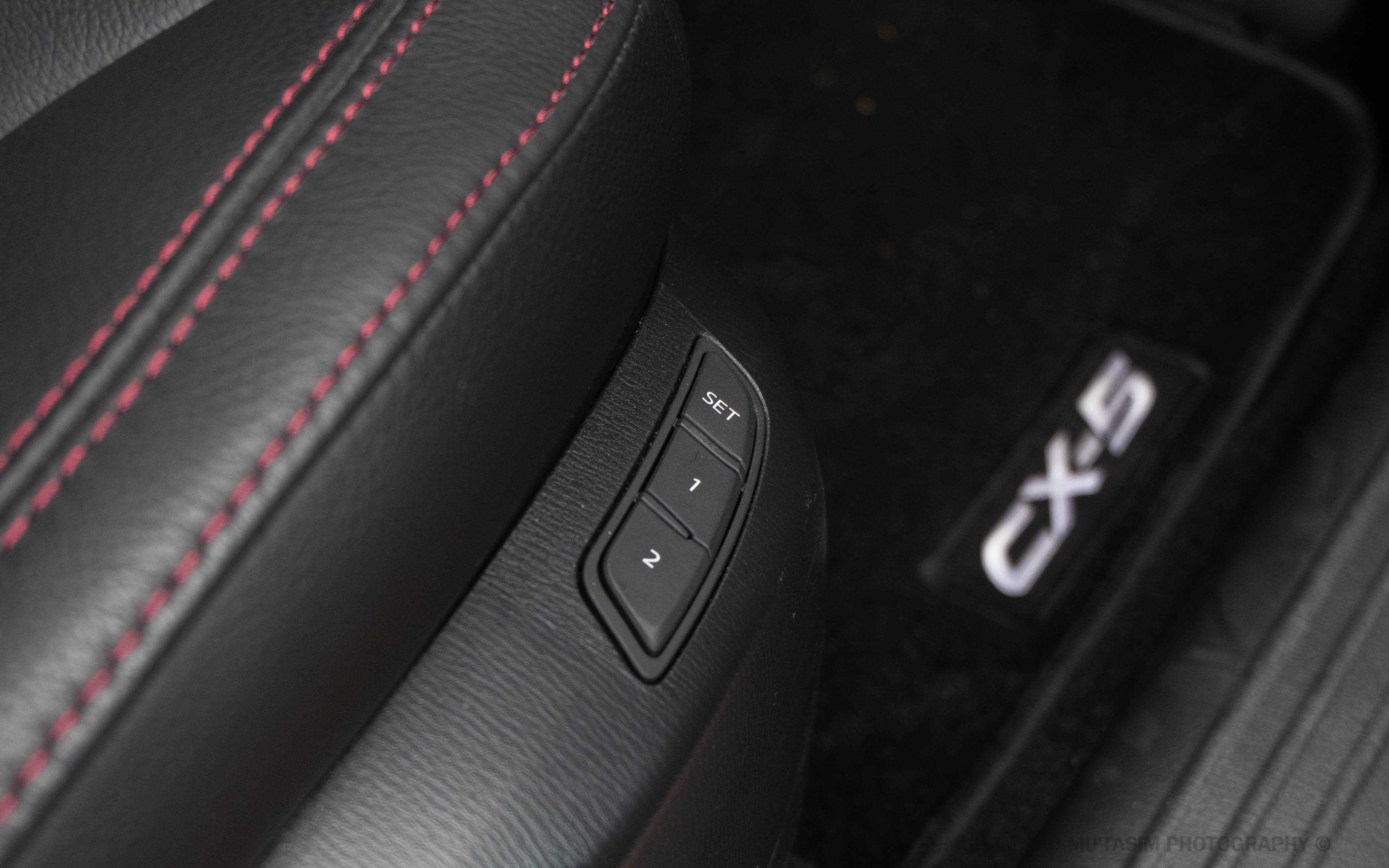 Also, the triple-gauge cluster with a seven-inch LCD screen in the middle proved to be very crisp and legible, while not overloading the driver with useless information, just like a well sorted-out Seiko automatic.

Elsewhere, the CX-5 is kitted out like a proper luxury car. You get powered and ventilated seats ‒ perfect for our climate ‒ with memory function for the driver's side, as well as a suite of USB Type A ports for charging your devices. 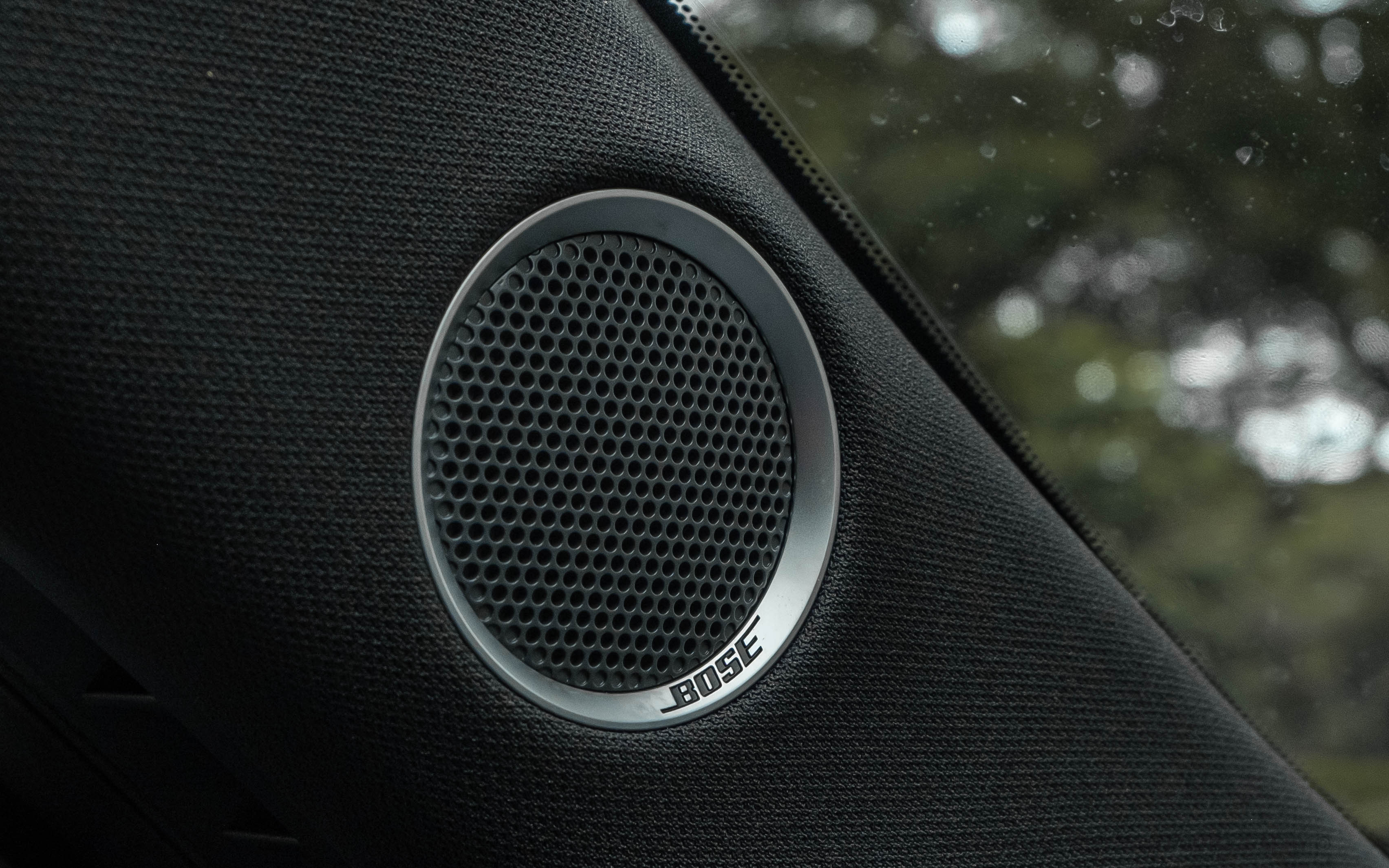 Both Luxury and Luxury Sports models come with a brilliant 10-speaker Bose premium audio system, although base model will have to make do with a six-speaker standard audio setup. 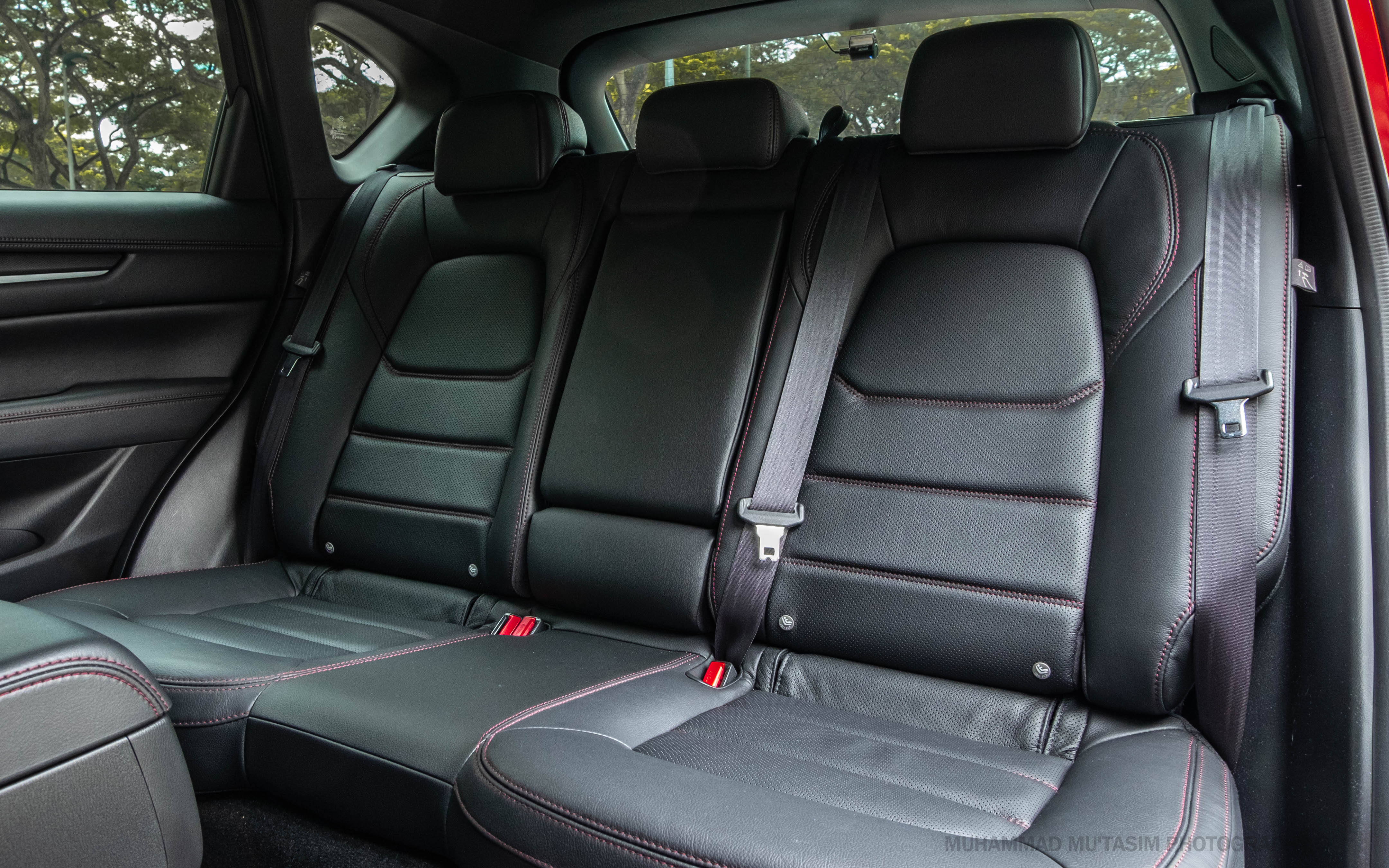 You will not be lacking in space up front or at the back. With a 2.7 metre-long wheelbase, legroom is generous for all passengers. Headroom is not neglected either. During our test, occupants measuring at 1.75 metres tall were able to sit inside comfortably without any issues.

Young families will also be happy to know that rear seats are ISOFIX-compatible. 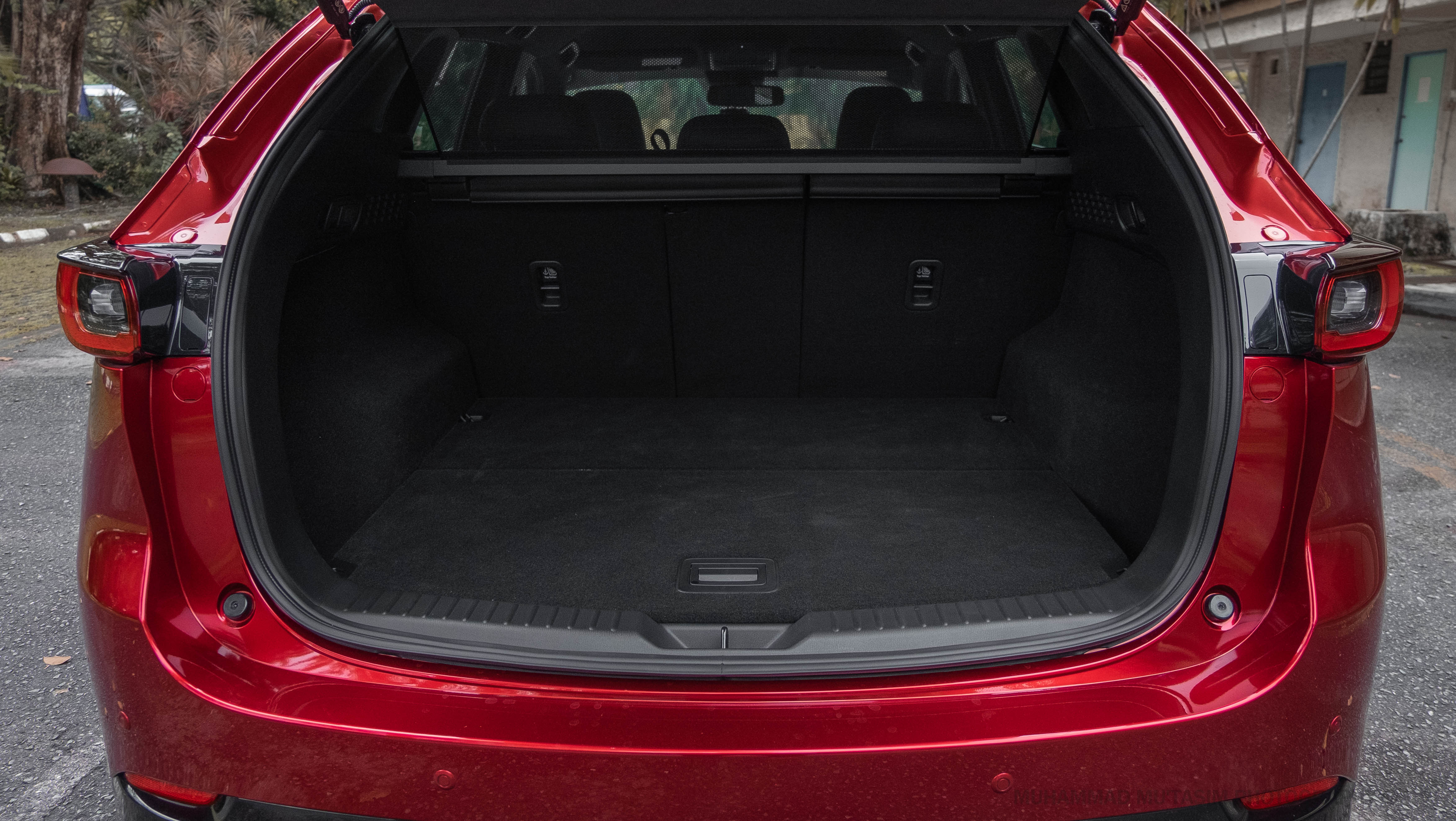 All this passenger space surely means that the cargo area takes quite a hit then, right?

Wrong. You get 438 litres of space behind, which is more than plenty should you want to load it up with several full-size luggage bags. Need even more? Simply remove the tonneau cover or fold down the 40:20:40 split rear seats, and you're good to go. It's even got a kick sensor under the rear bumper, so you can open the electric tailgate even if your hands are full.

A 17-inch spare tyre comes as standard; an add-on that has become increasingly rare in modern cars. 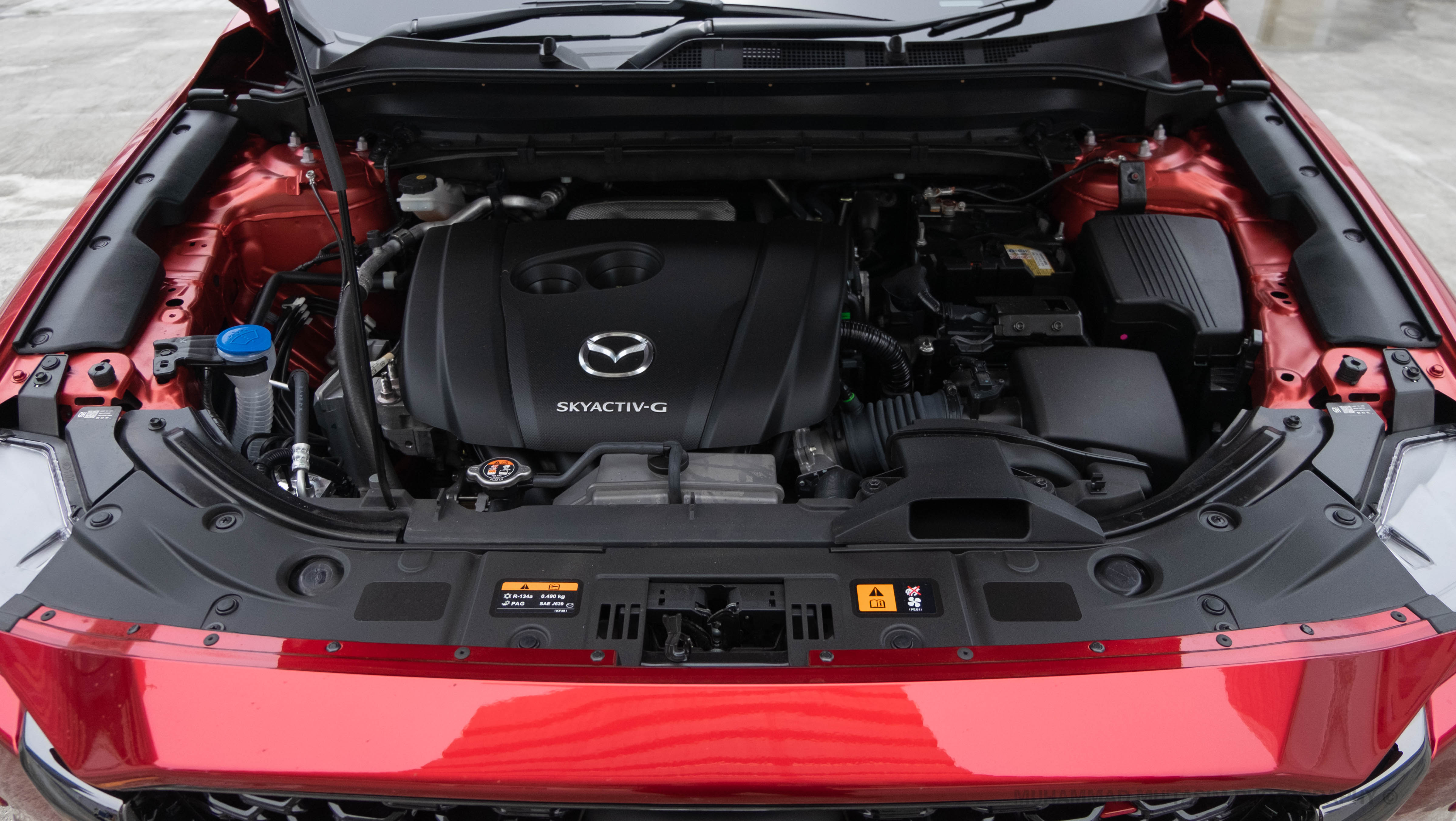 This being a mainstream crossover, you have to temper your expectations, and realise that you will not be getting Patek Philippe levels of mechanical wizardy here. The powerplant, a 2.0-litre Skyactiv-G four-cylinder engine, pumps out 165 horsepower and 213 Nm of torque; sufficient for Singapore standards, but not much else in terms of refinement.

Power delivery, though linear, feels urgent and zipping in and out of traffic was a breezy affair. I was impressed by how responsive the six-speed automatic was, although the CX-5 was quite vocal towards the higher end of the RPM range. 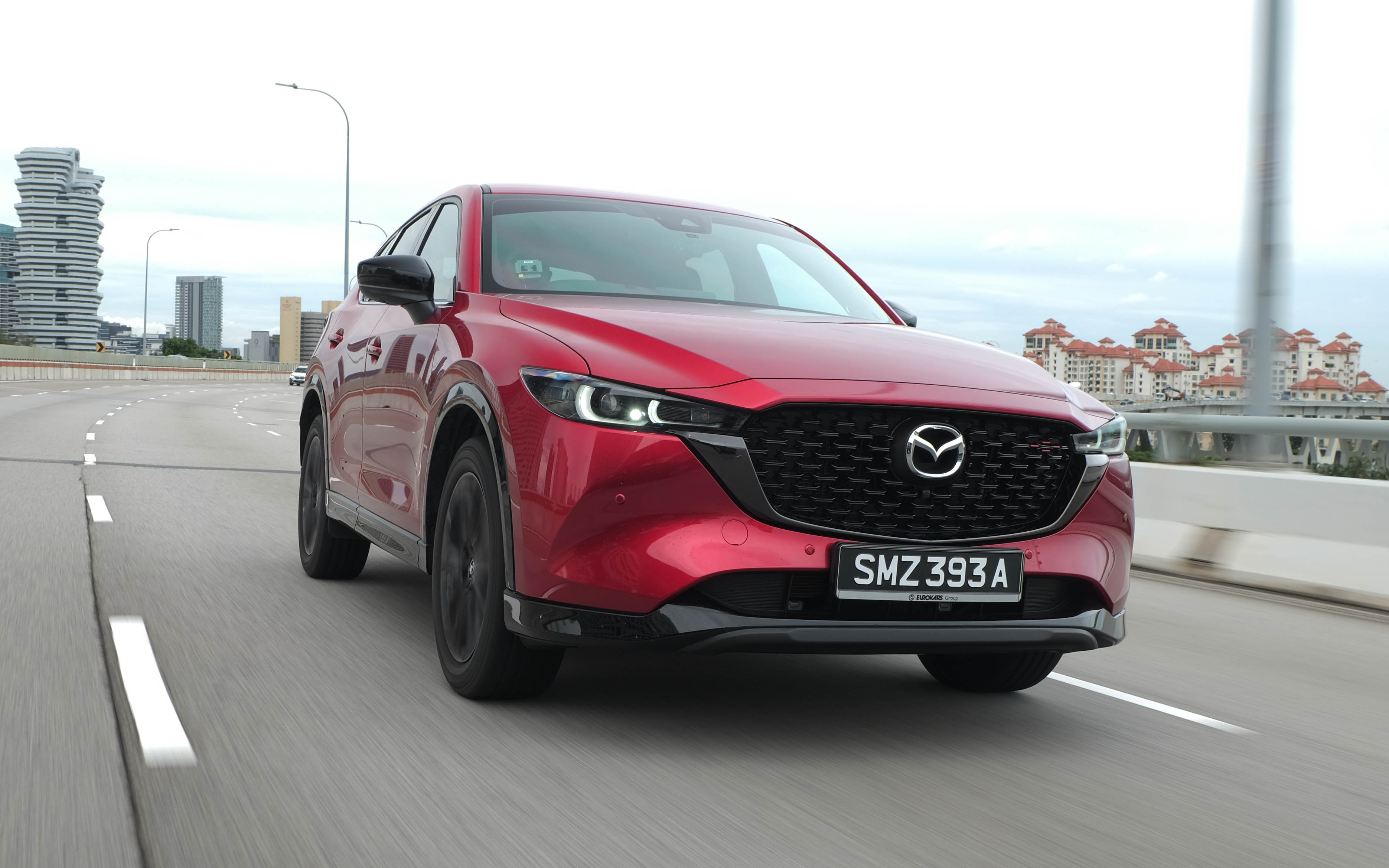 Where it excels at is in achieving what other internal combustion engines struggle with: a high compression ratio of 13:1 without the need for turbochargers. It also benefits from an improved fuel economy; all this without any form of hybridisation.

I managed to clock about 12 km/l after driving around the city and along the expressways, which is fairly close to the official 14.3 km/l figure. 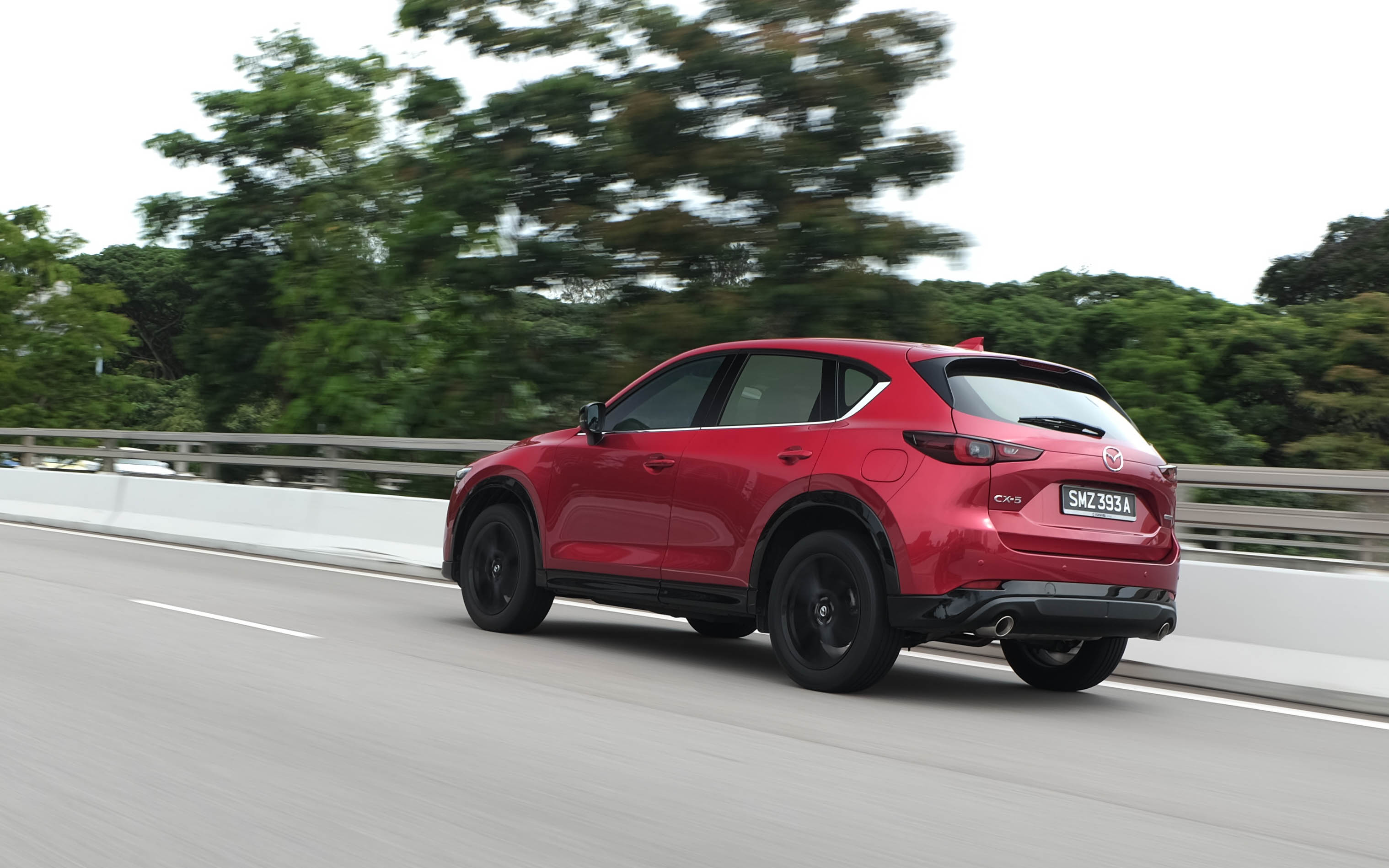 When pushed hard, it is surprisingly nimble and lithe. Throw the CX-5 around the bends, and its chassis responds more like how a saloon car would than a high-riding SUV. Like any Mazda worth its salt, the steering feedback feels direct and communicative.

The company's G-Vectoring Control Plus torque vectoring system further gives the CX-5 an extra oomph when it comes to cornering ability, controlling the engine torque and brake force in real-time to enhance stability and steering control

It also helps that multi-links are found on the rear wheels, which translate to greater agility and comfort when driving along challenging roads. 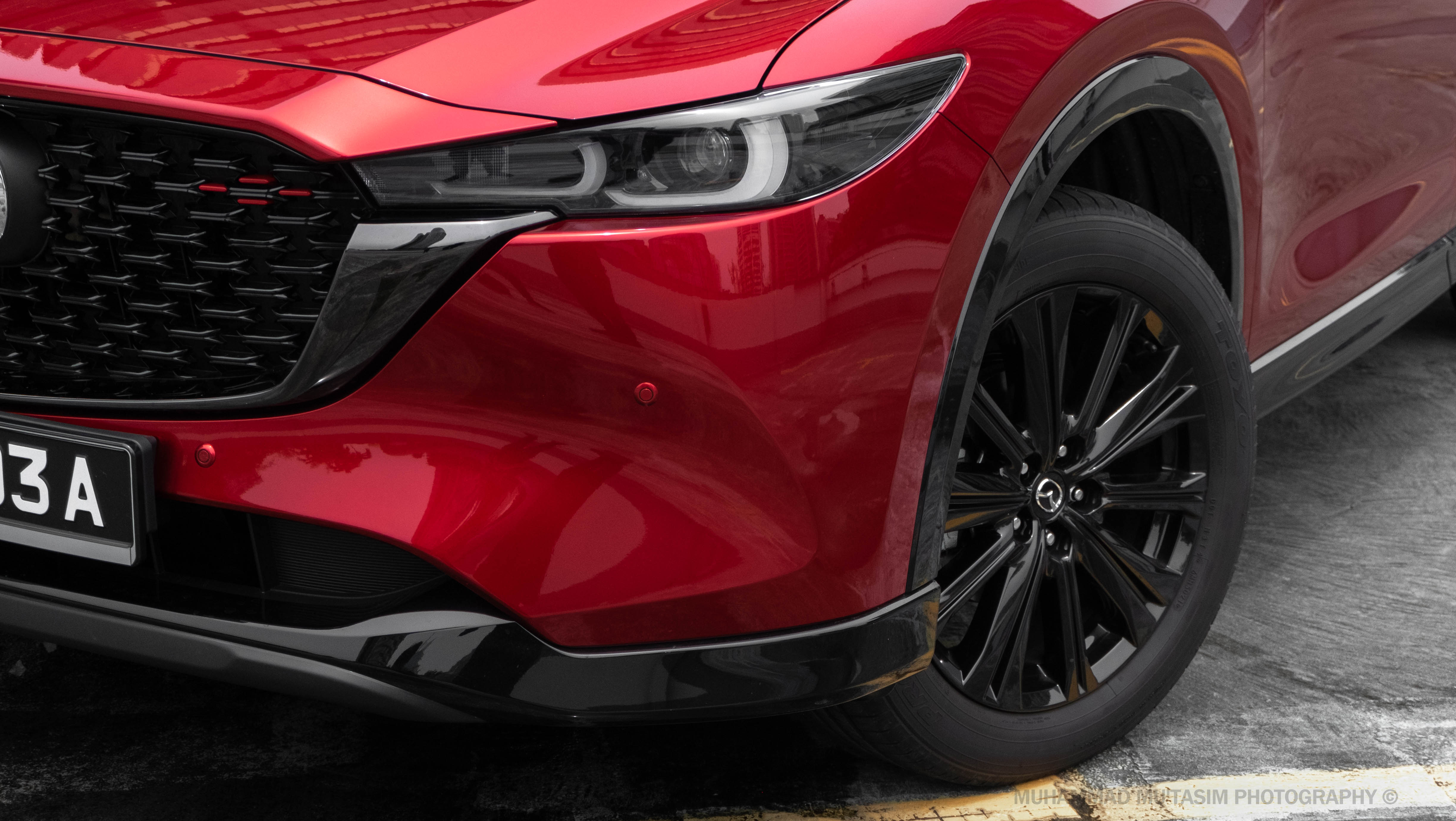 There's also a considerable amount of bite when it comes to stopping power, with ventilated discs up front and solid discs at the rear. Pedal feedback is precise and not at all mushy, which cannot be said for many other crossovers in the market.

All of this is on top of the usual refinements that we've come to expect from the Hiroshima-based carmaker, such as having six airbags and a 360° view monitor (the latter only found on the Luxury and Luxury Sports trim levels).

Have A Gliding Good Time 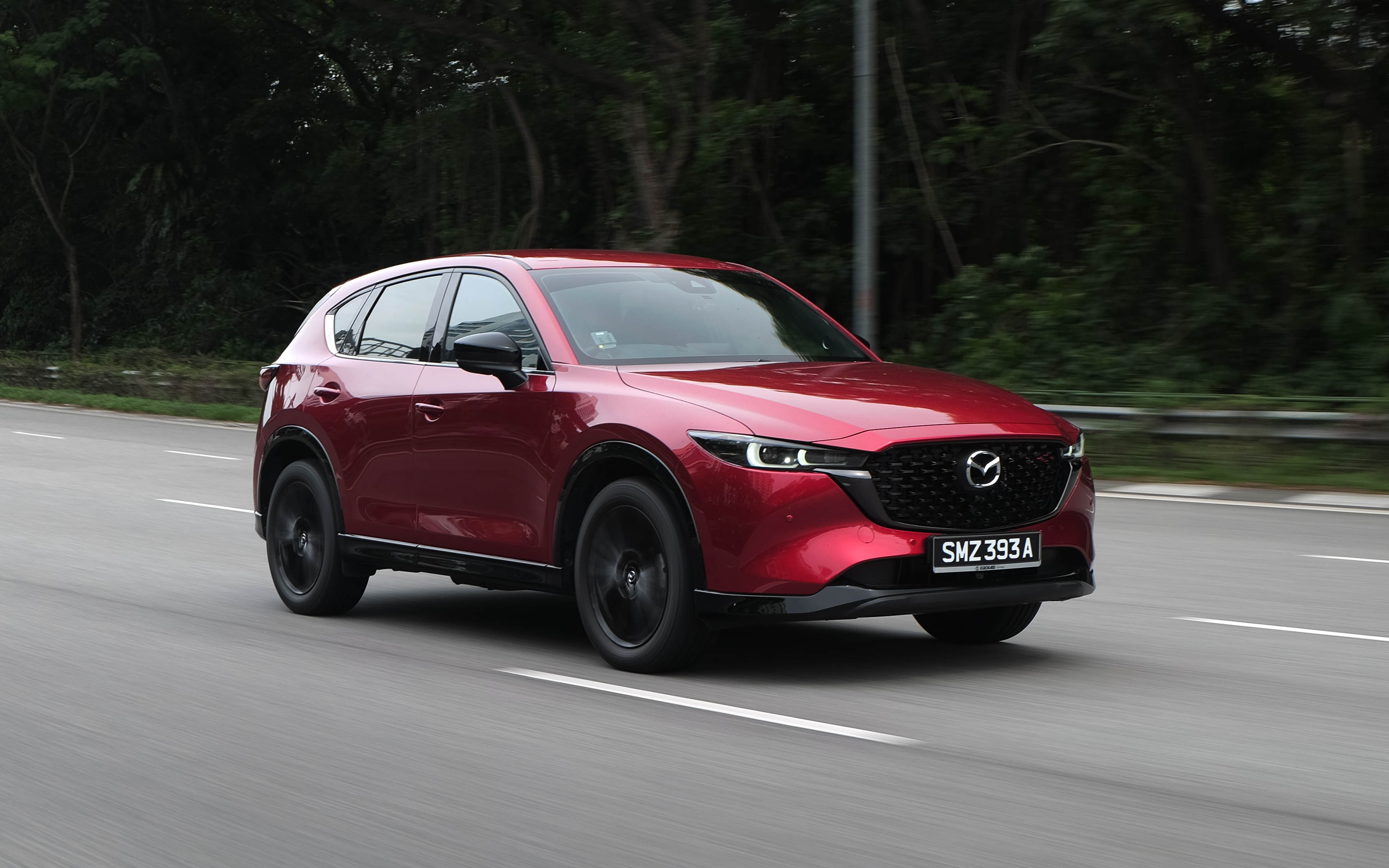 In many regards, the CX-5 is quite a comprehensive bit of kit for various demographics. Like a premium timepiece from Seiko, it does well in just about every aspect: efficiency, practicality, and value for money. And perhaps just as importantly, its effortlessly beautiful sense of style.

With the exception of its ageing infotainment screen, this revised CX-5 is truly an enticing proposition from Japan's last "maverick" carmaker, and is one that deserves to be in your radar.