Chances are, you came across a Subaru Forester on your way to work today. There's probably one – or several – parked at your local carpark at this very moment. When it comes to popularity, it’s a certified “cool kid” here.

Whereas the once-ubiquitous Impreza and Legacy saloon cars have steadily fallen out of favour among consumers in Singapore, their Forester sibling has enjoyed a steady surge in demand over the years, with seemingly no signs of stopping.

With copious amounts of space available inside for both occupants and cargo, along with a formidable Boxer engine-and-AWD-system combination powering it, it's no wonder the SUV has won over the hearts and minds of owners here.

Keeping In Shape Outside

The Forester that we have on test here is not built entirely from the ground-up, but it sure does feel like it. This fifth-generation facelifted model gains a redesigned front fascia, the most notable of which are the redesigned and more angular headlights reminiscent of the company's concept cars, as well as revised bumper contours.

Subaru has also done away with the arguably excessive chrome-finish panel pieces for more subtle gloss black ones, such as the grille and fog light surrounds.

Changes made to the rear are not as dramatic, only limited to elements like the redesigned faux diffuser, and a gloss black panel running across between the tail lights.

The latter does look good here with the Forester's new Cascade Green Silica paintwork option. Alternatively, you can also select Autumn Green Metallic and Brilliant Bronze Metallic, all of which are new additions to Subaru's colour palette.

Disc brakes are standard affair with the Forester, and they're mated to this chunky set of five-spoke alloy wheels and 225/55 R18 Bridgestone Dueler H/P tyres.

Staying Refreshed and Recharged Inside

Stepping inside, the interior feels decidedly old-school, but with all the right improvements. Buttons for just about everything are all laid out logically and ergonomically across the cabin, within easy reach from the driving position.

There's even a smartphone-like multifunction display above the infotainment screen that provides critical vehicle data in real-time, with detailed animations to boot. 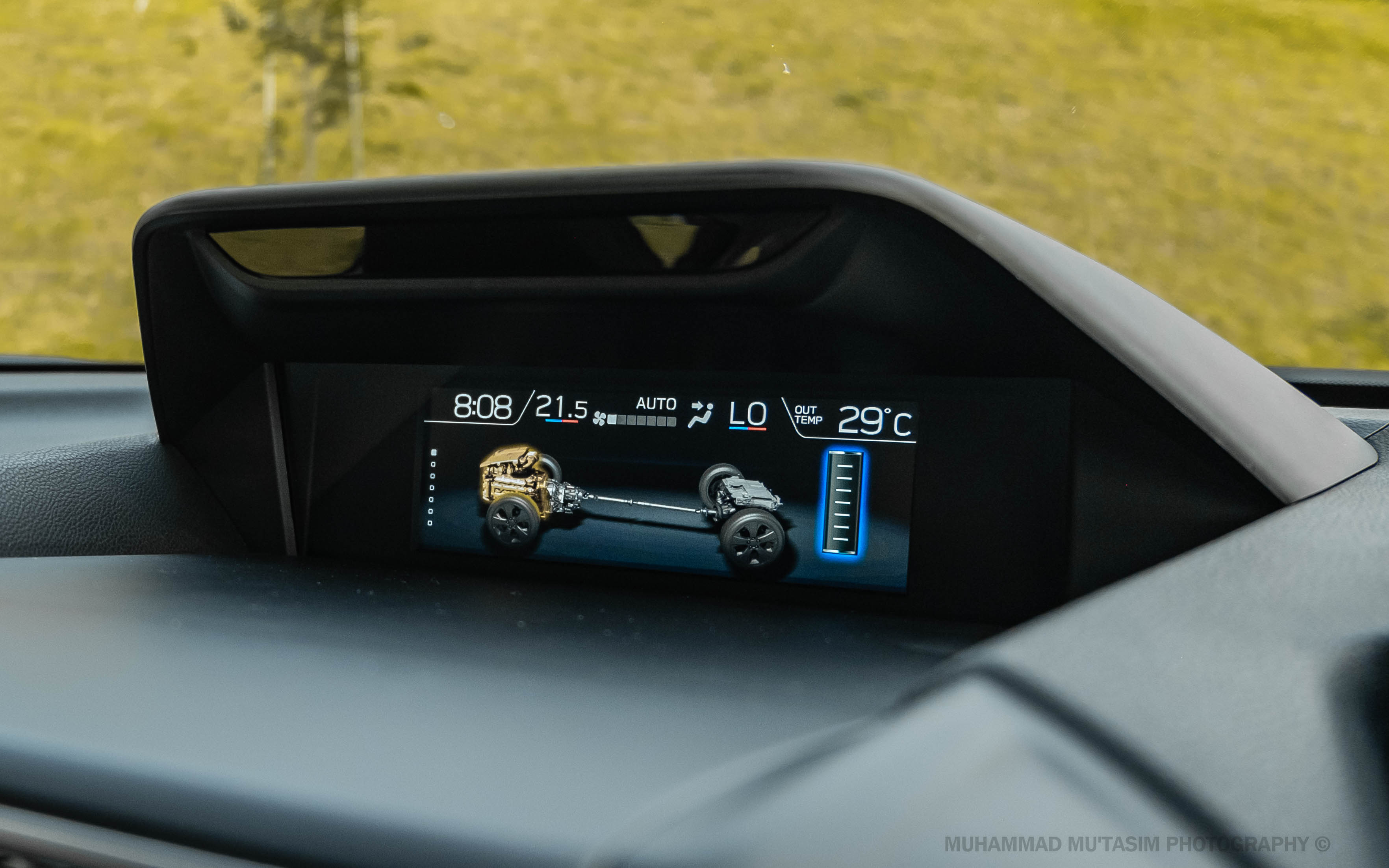 I'm also happy to report that the HVAC controls – of the buttons-and-dials variety, thankfully – have been rearranged and look less cheap. You have the option to adjust the temperature via gesture control, but we feel that it's more of a gimmick than a useful feature to have. More often than not, waving our hands while talking to our passengers led to unintentional adjustments on the AC.

Physical switchgear is still the best, hands down (no pun intended).

Materials used are mostly soft-touch black plastic and leather, with contrasting white stitching. They're not the final word in luxury admittedly, but this is more than generous considering the Forester is designed to bash through jungles first and foremost, and cruise down Orchard Road second.

It's also heartening to see that Subaru's given their updated Forester a host of new and updated technologies. Their famed EyeSight Driver Assist safety suite, now in its fourth iteration, now boasts a wider field-of-view and a longer detection range to prevent collisions more effectively.

Its updated on-board cameras are now mounted directly against the windscreen, preventing occupants from accidentally smudging the lenses and compromising the EyeSight system's effectiveness.

We were pleasantly surprised by how well the system worked in real-world conditions. Activating the Adaptive Cruise Control function on the expressways was easy enough, but now it's even better with Subaru's lane centring functionality working in tandem.

Instead of veering into another lane blindly, the Forester is now able to correct itself accordingly by reading the lane markers, and steer itself back to the middle of its lane. 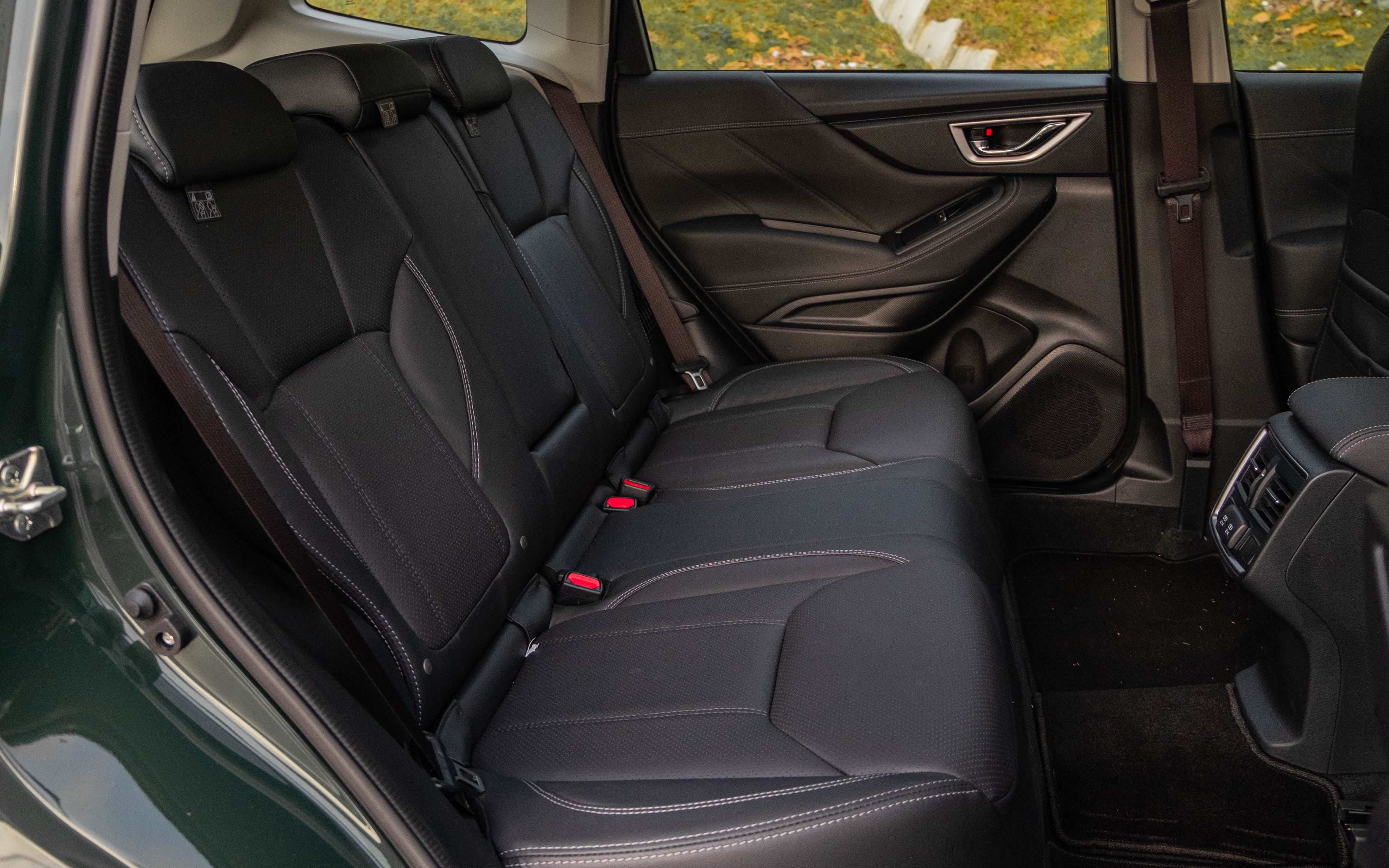 Space for second-row occupants is positively cavernous, with ample room for three full-size adults. Headroom and legroom are remarkably good for the average Singaporean. The raised transmission tunnel hump on the floor does mean that the middle passenger would have to expect slightly less legroom, and consequently, less comfort on longer journeys.

A pair of USB-A ports provide some charging power for devices, which is excellent for long-distance drives up North. There are also AC blowers to cool the passengers down quickly.

The second-row seats fold down efficiently with a simple pull of the lever found on either the right or left-side seat (or on the D-pillar if you're in the cargo area), allowing you to dramatically increase the 509-litre boot space to 1,779 litres of flat flooring to dump just about anything under the sun. Speaking of which... 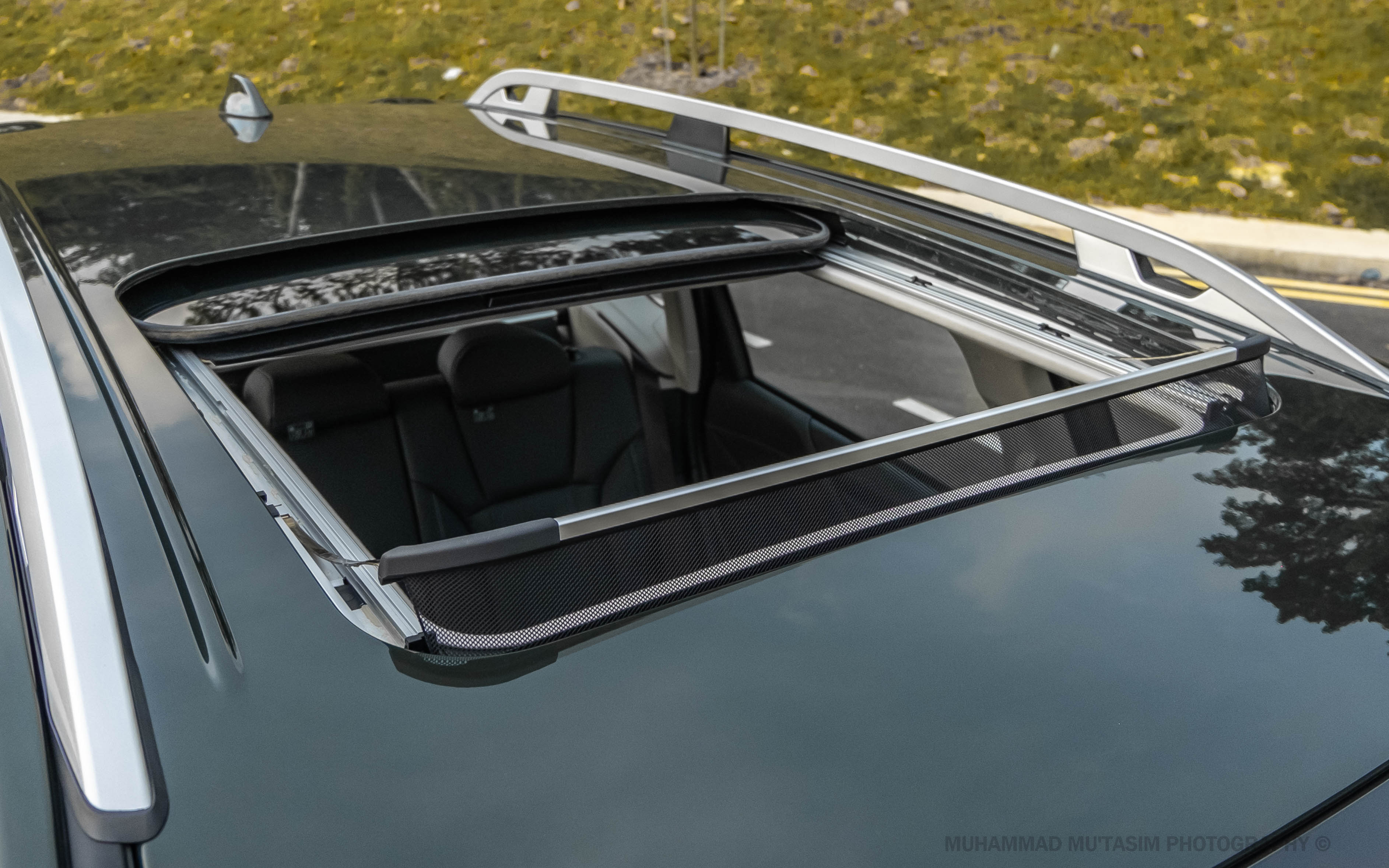 Subaru's main party piece is up above, namely a panoramic power moonroof. Simply flick a switch and the glass panel slides away to reveal an open roof for you and your passengers to enjoy. Not particularly useful here in Singapore, we reckon, but on cool nights, this would be quite a novelty that is sure to keep the young ones (or young at heart) fascinated.

Pop open the bonnet and you're greeted with the Forester's beating heart, an honest-to-goodness FB20D flat-four e-Boxer engine. It works together with an AC synchronous motor to pump out a fairly decent 150 horsepower and 194 Nm of torque. Hardly headline figures worth shouting about, but they get the job done for driving around the island.

It sits on the Subaru Global Platform (SGP) and it's easy to see the benefits of this. 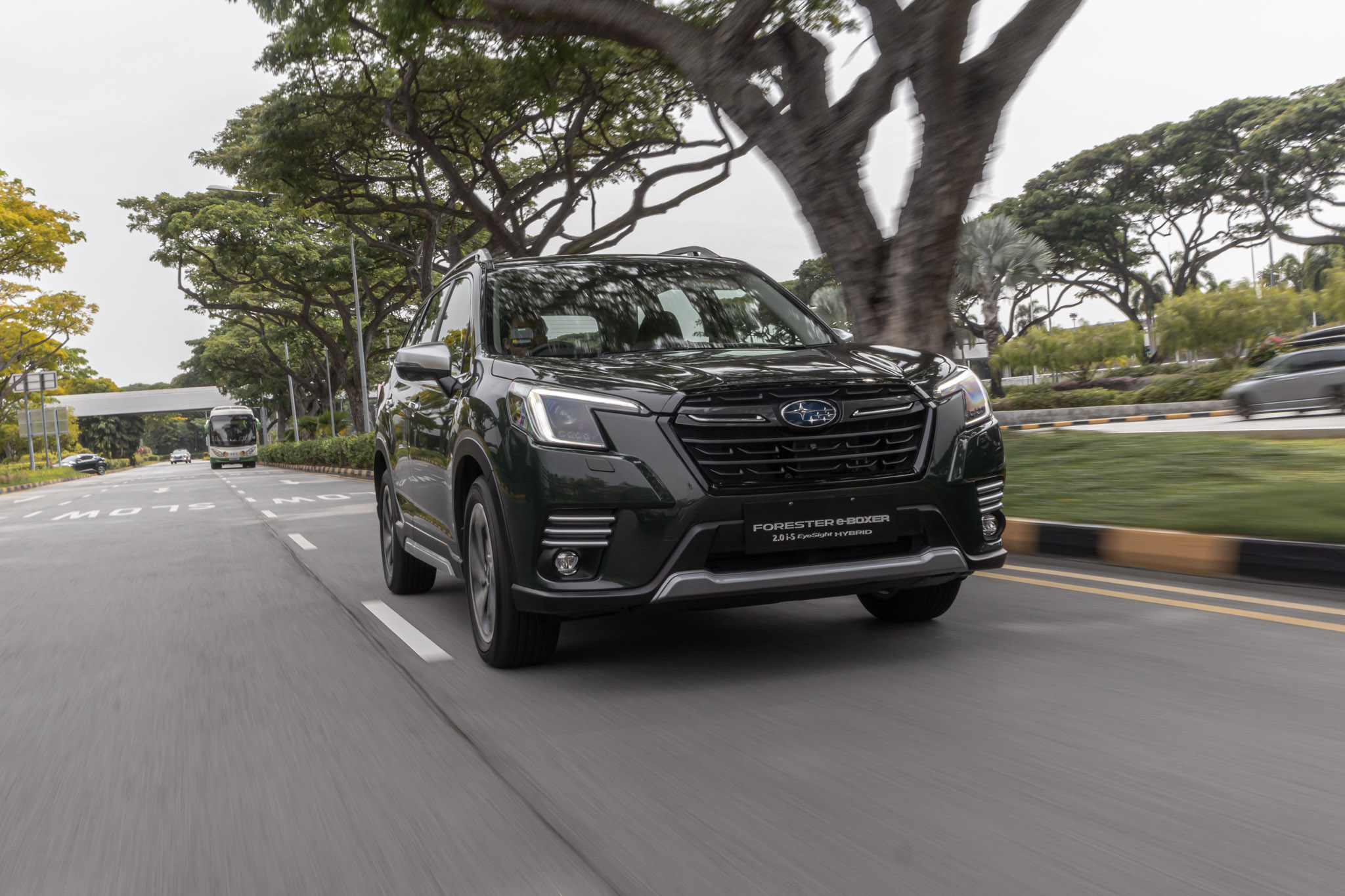 NVH levels are suppressed quite well when the Forester's on the move, squashing the theory that an SUV has to compromise comfort and sensibility.

During our testing, it remained stable at sustained high speeds without breaking a sweat. It showed similarly confidence-inspiring characteristics around the bends, thanks also to its four-wheel independent suspension that soaks up bumps and potholes like a champ.

Will the Forester win any Traffic Light Grands Prix? The answer is "no". Its century sprint timing is a very leisurely 11.8 seconds, and the engine strains quite loudly when the pedal's to the floor.

But before you raise your pitchforks, do keep in mind that this is a family-oriented SUV designed for comfort, and not to set lap times and get chummy with the folks at 10 Ubi Ave 3 over coffee. 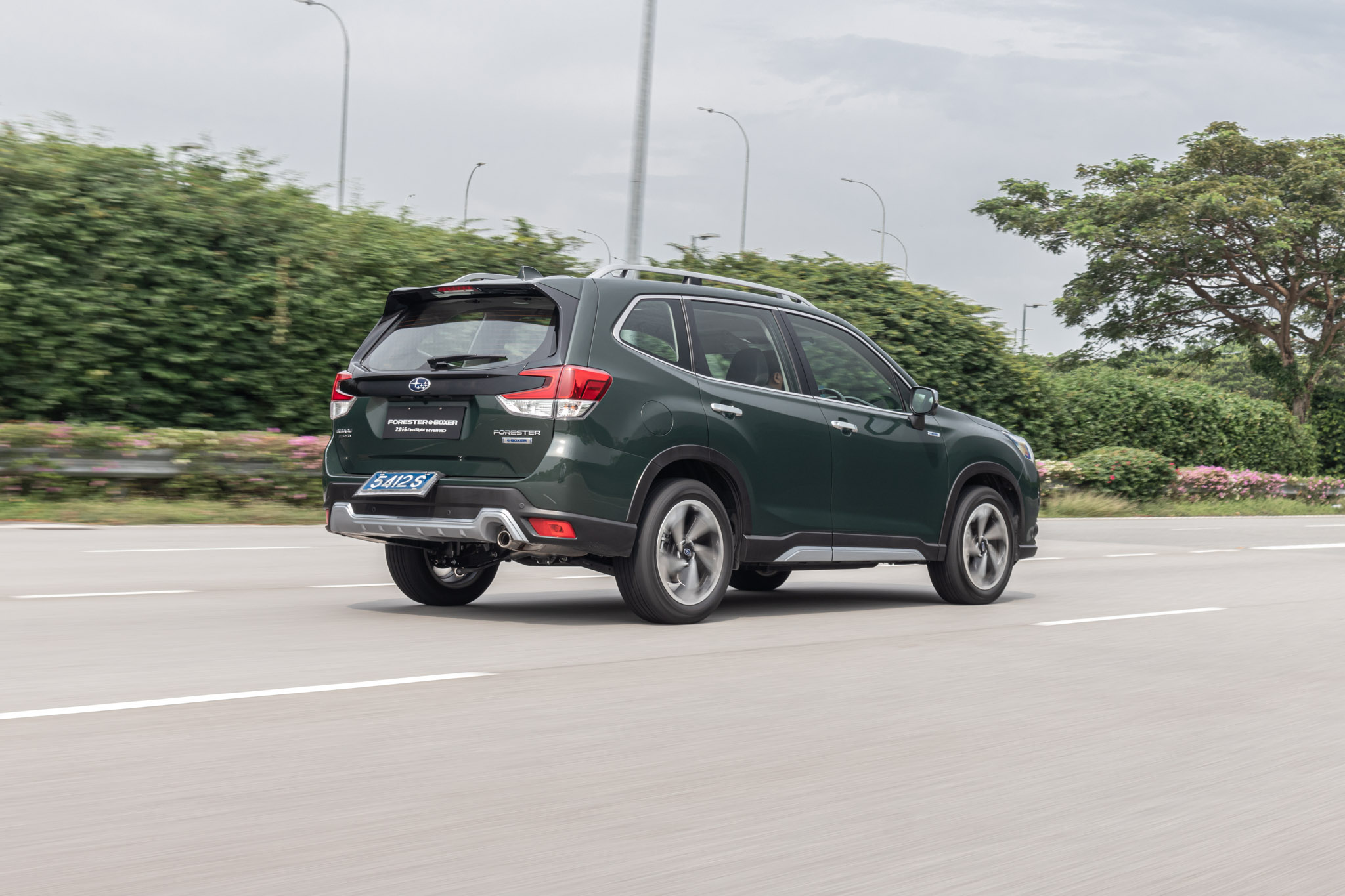 While Subaru claims that it's able to achieve 14.5 km/l, we clocked 9.6 km/l with mostly city driving. We did notice that it is quite a competent mild hybrid though, with the engine deactivating if the car is coasting for some time, all in the name of efficiency.

When The Road Gets Tough, Go Off-Road 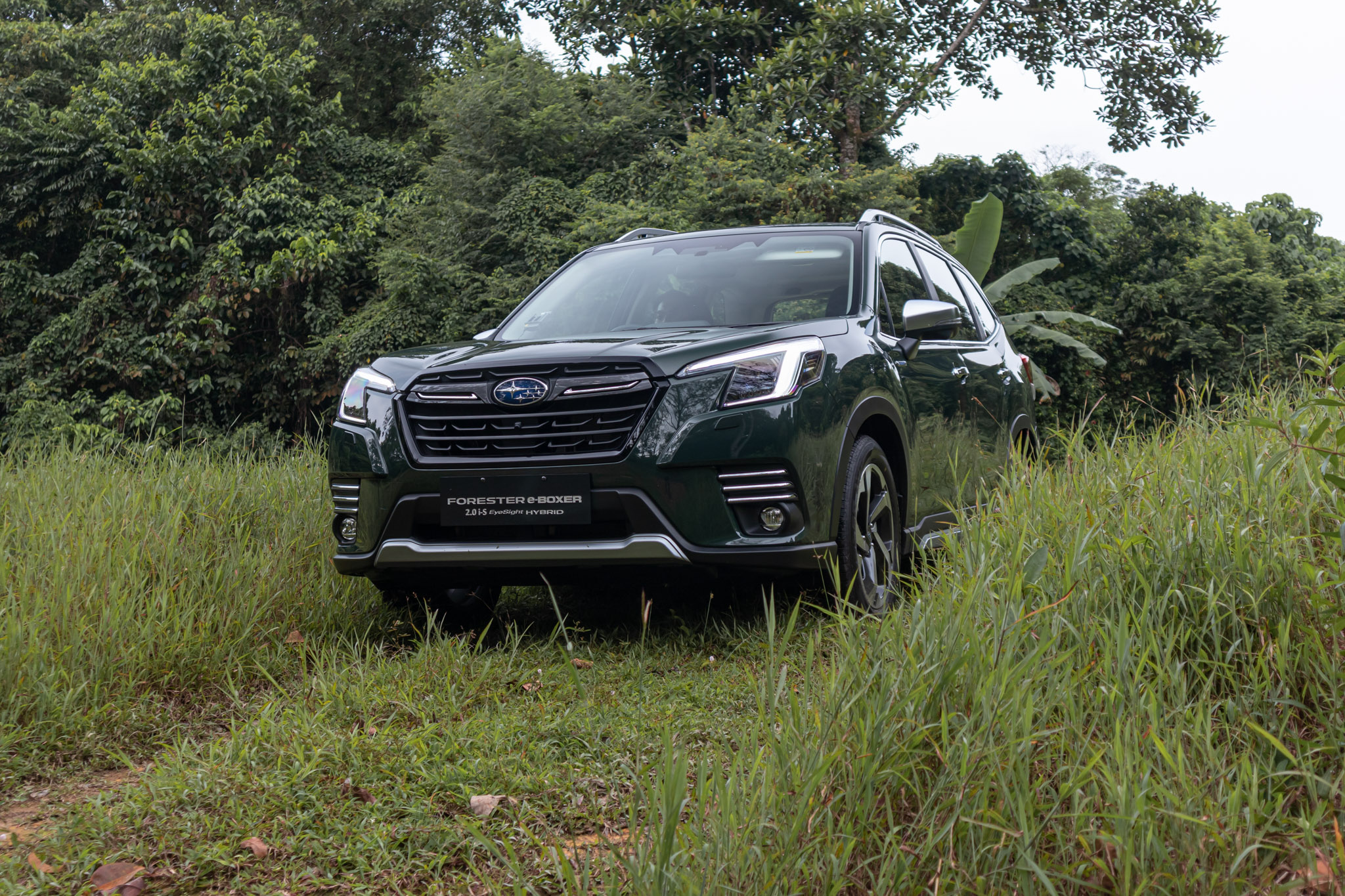 Where the Forester does excel at is off the tarmac. It benefits from not just an competent AWD system that has been perfected over the decades through rallying, but also from its advanced X-Mode.

This feature is operable via a dial on the centre console, and adjusts the power output and torque split among others, as the SUV traverses across challenging surfaces. From asphalt to sticky mud, the Forester is able to handle most of these terrains with ease. 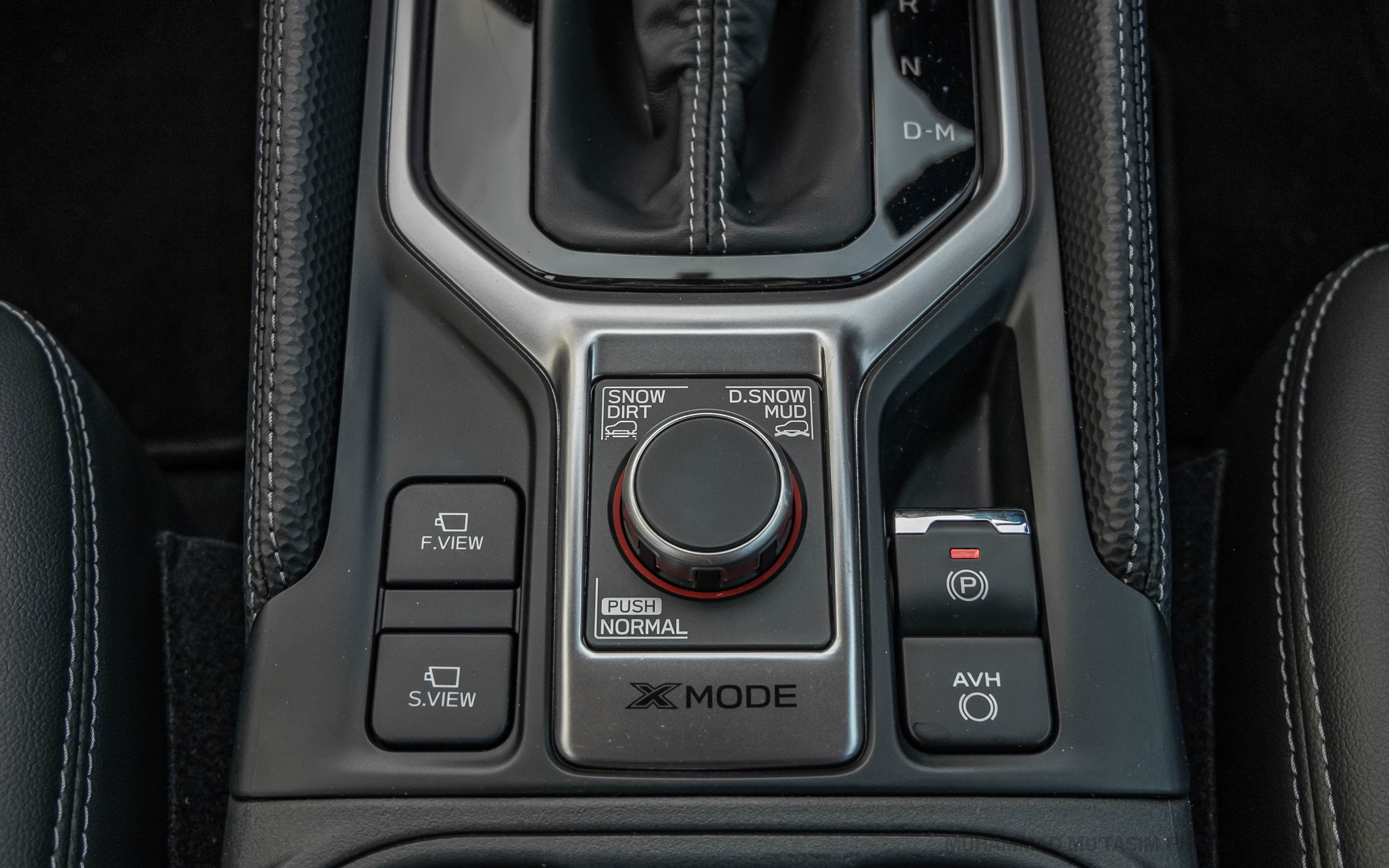 We managed to test both Dirt and Mud modes on unusually steep inclines, and the Forester managed to pull through and avoid obstacles easily with its 220 mm-high ground clearance. Suffice it to say, the Forester works as advertised when it's on its home ground off the beaten path.

For S$173,800, the Forester faces plenty of competition from its Japanese brethren. A top-spec Mitsubishi Outlander is a full $12,000 cheaper and offers three seating rows, while the Toyota RAV4 Hybrid provides better fuel efficiency and more power.

But give it some thought, and you'll begin to understand just how much value the Forester provides. Not only is it mighty capable on rough non-tarmac surfaces, it comes with a comprehensive spec sheet and is loaded full of award-winning safety features as standard. And with it positioned at the "sweet spot" in terms of pricing, the Forester makes a compelling case for itself, and has no problem knocking its competition out.