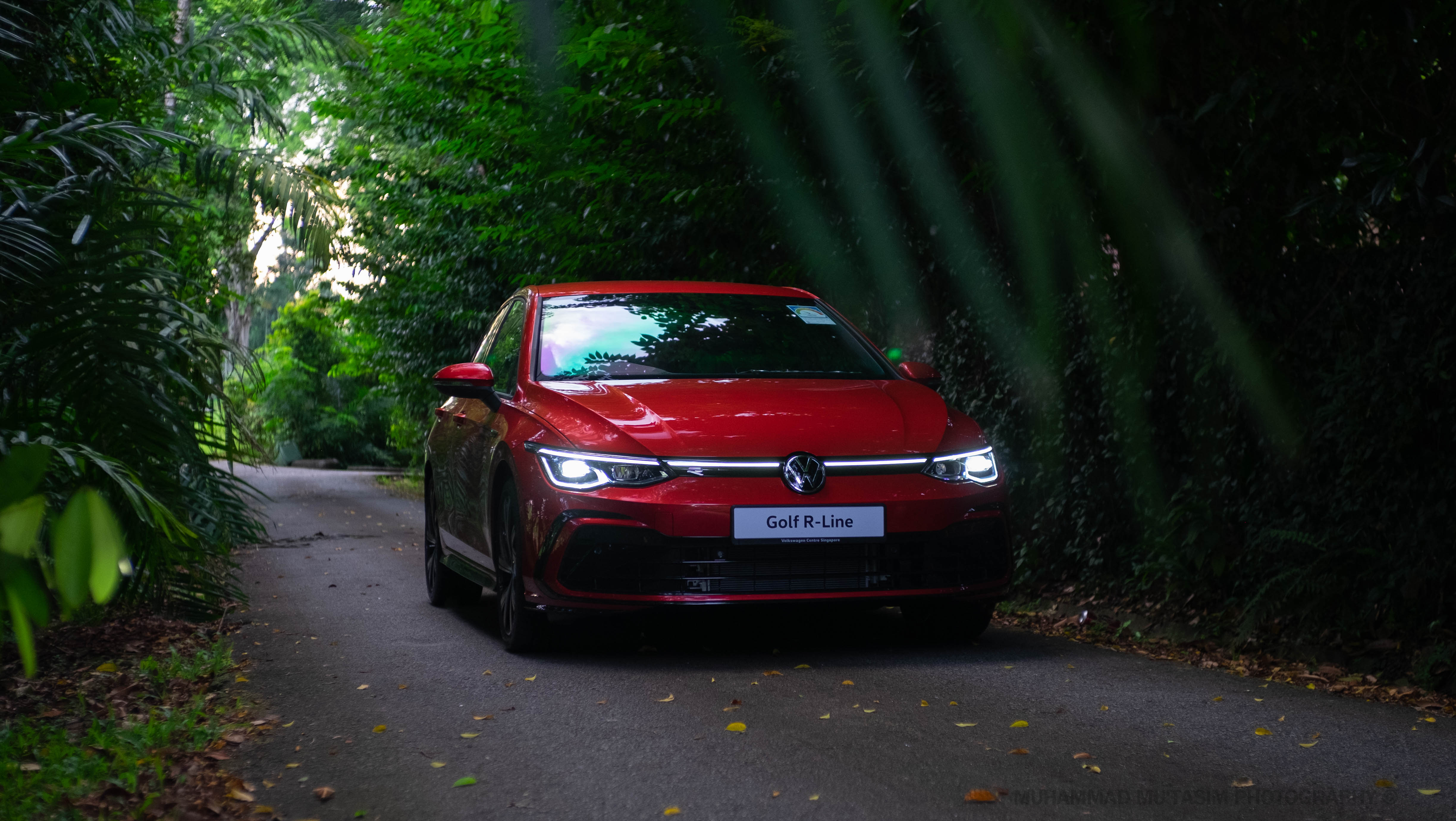 The Golf. Like its venerable Beetle predecessor, this model barely needs any introduction. After all, it’s been on the market for almost half a century, stirring hearts and souls along the way, especially in its spicy GTI or R flavours.

So when Volkswagen unveiled the R-Line for its eighth-generation Golf, we were left wondering: would it be a hole-in-one with all the fun and charisma possessed by its hot hatch siblings, or would it be a misread putt, being merely a cash-grabbing exercise with superficial trim add-ons? 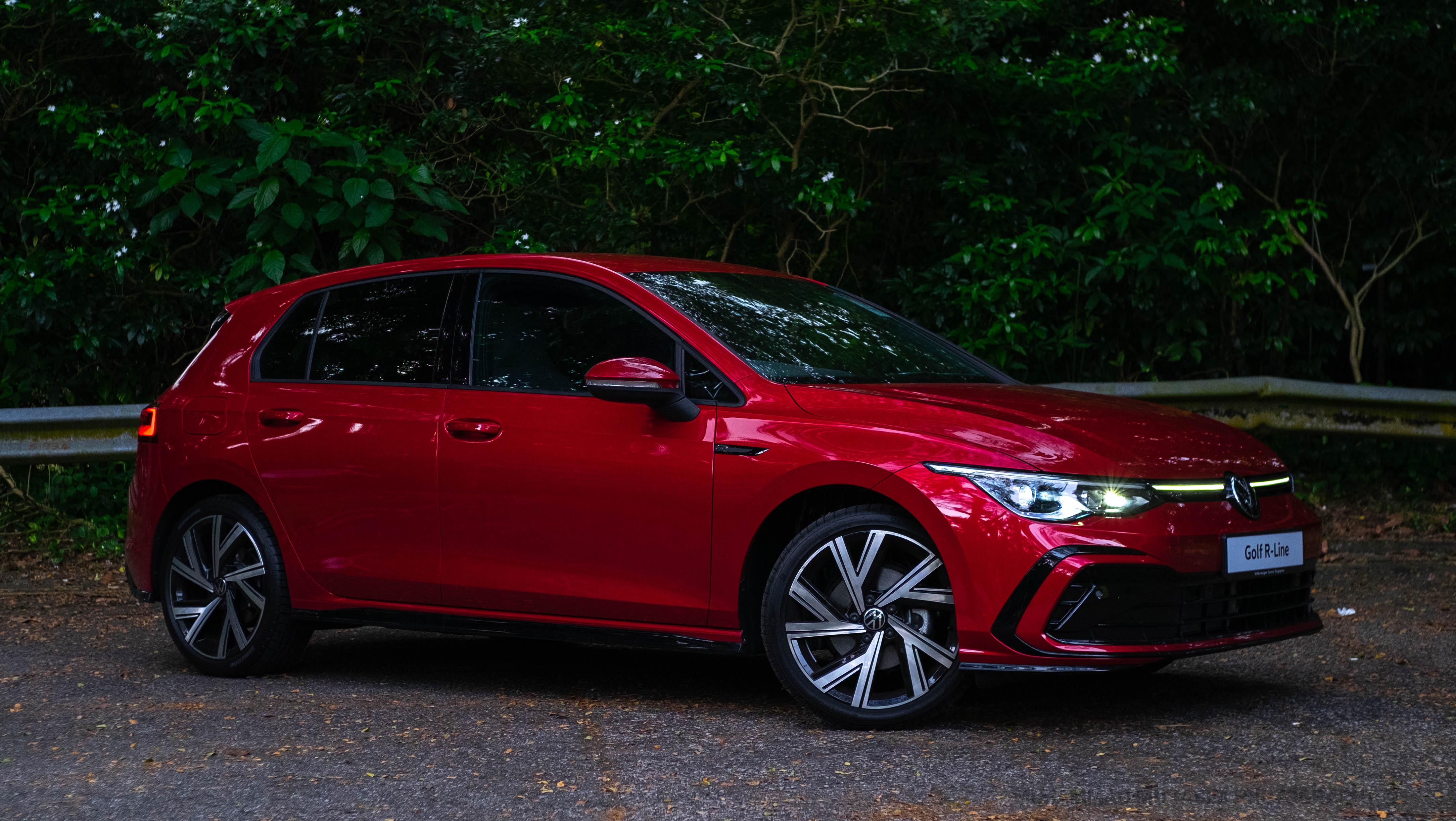 While the Golf R-Line is not set up to be a scorcher through-and-through, it's the perfect introduction into Volkswagen's world of performance hatches.

Visually-speaking, it looks very much like its GTI brother, complete with an aggressively-designed front bumper (albeit without the unique honeycomb-style foglights) and subtle gloss black aero bits on the sides. Our unit came in Kings Red Metallic, providing a sporty yet matured look. The Golf is kitted out with LED "Plus" headlights, flanking the futuristic LED lightbar that runs across the front grille, adding to the visual spectacle.

With the R-Line styling pack and lowered suspension, the Mk8 Golf's already-sharp looks with its haunched front fenders and sleek character lines are further accentuated. There's also a subtle Volkswagen scripture on the B-pillars, as well as illuminated door handles. Your average boyracer-mobile, this is not. 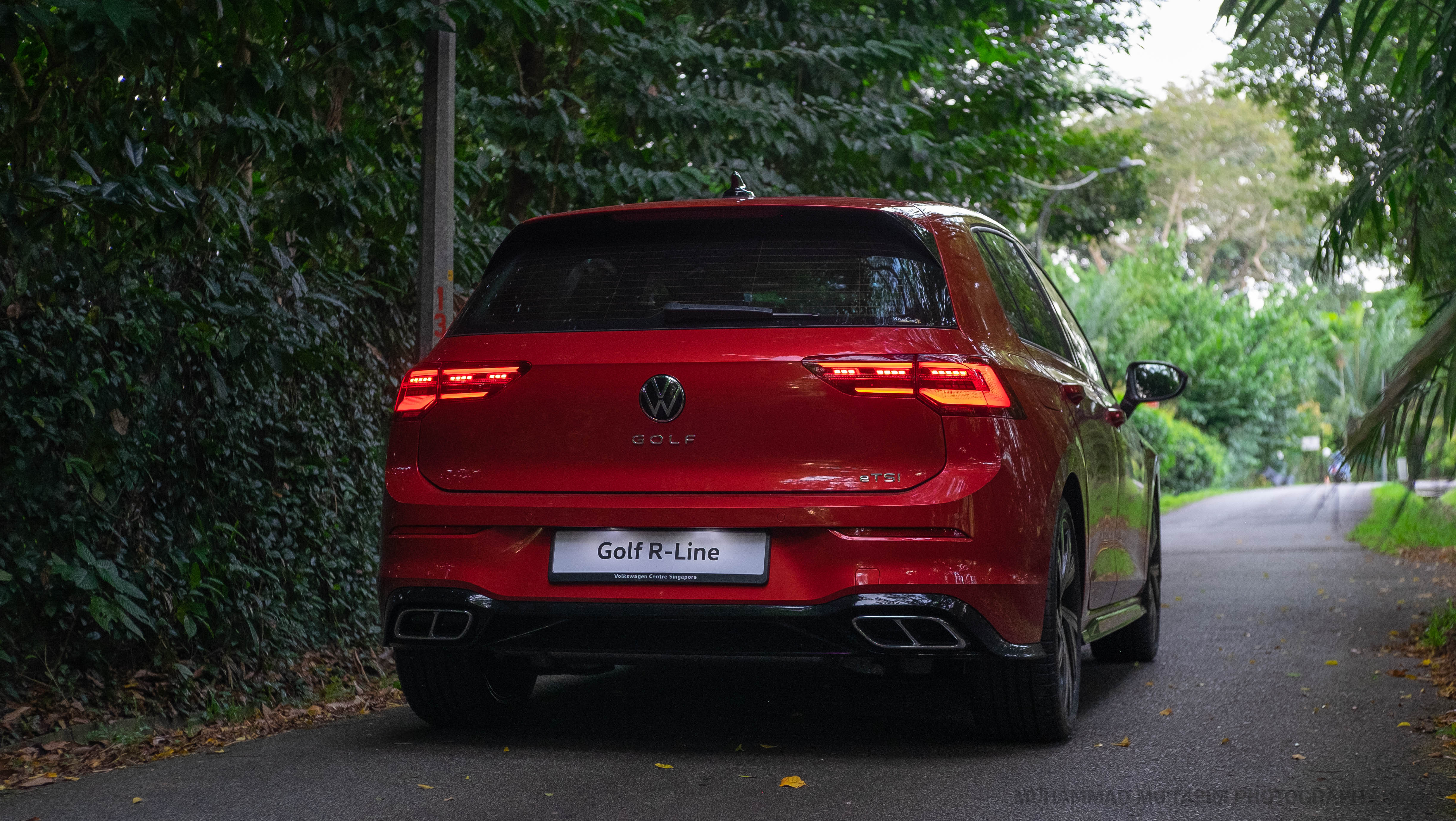 It also benefits from a set of 18-inch Bergamo alloy wheels, wrapped around in grippy 225/40 R18 Bridgestone Turanza T005 tyres. The glossy aero parts continue around the back, and while the car does not come with exposed twin pipes like the GTI – which we personally prefer – it does come with chrome dummy tailpipe surrounds. 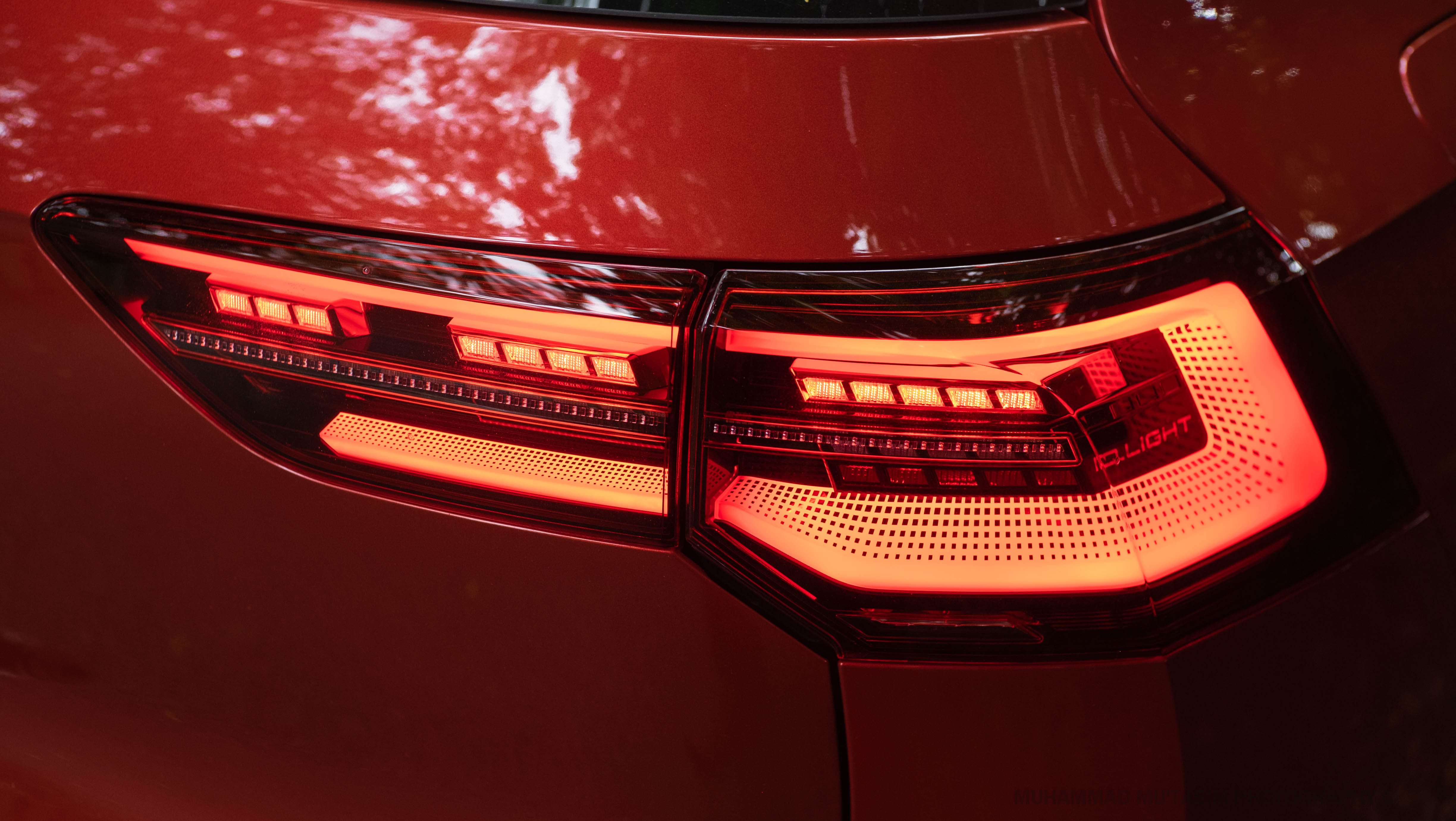 It also comes with a pair of intricately-designed taillights with pixel motifs found in the elements, so that you'll never mistake it for any other car on the road at night. And like many other Volkswagen Group cars, the signal lights are dynamic. 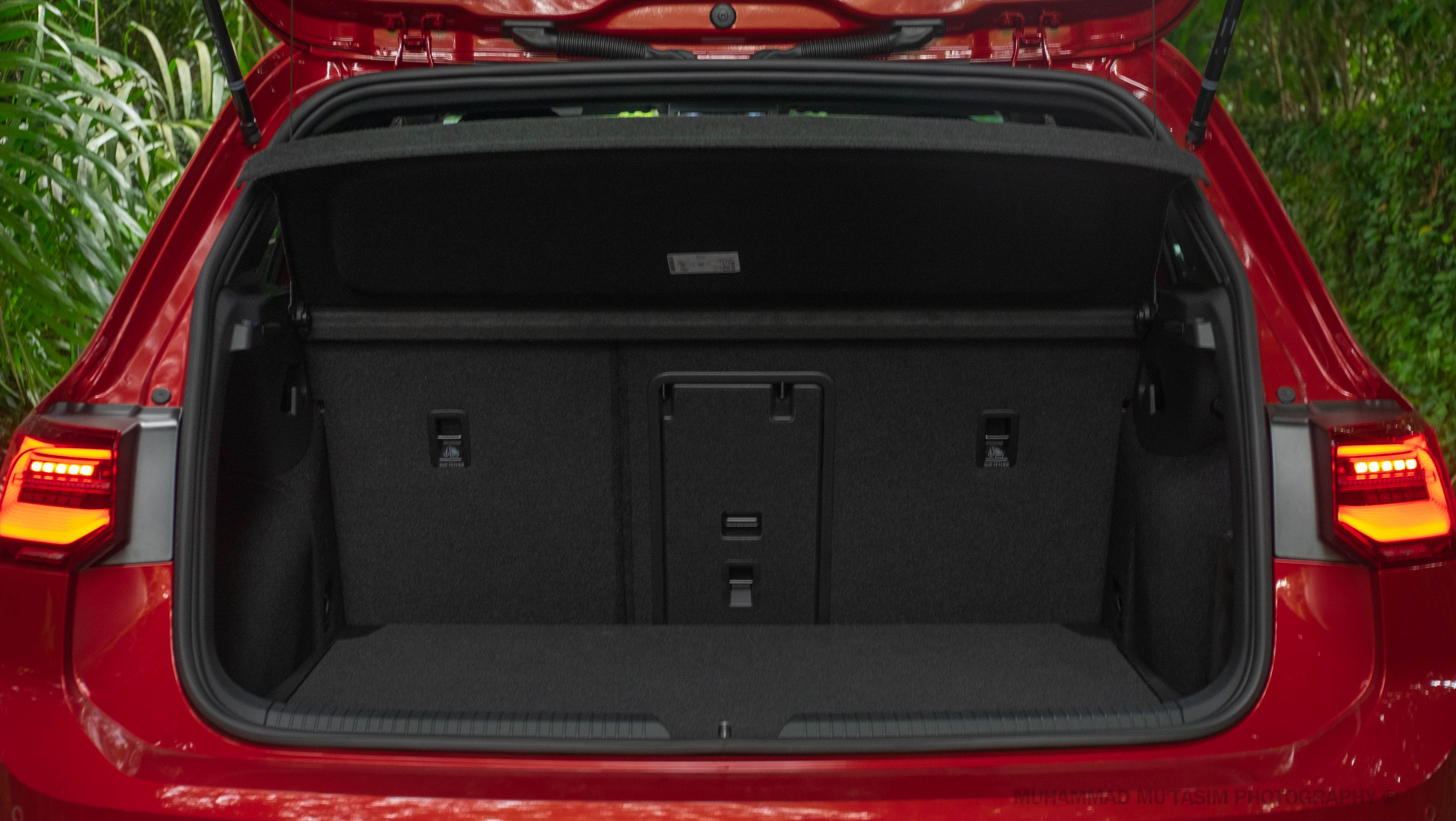 The VW rear badge ingeniously doubles as a latch for the bootlid. Flip it open and you are greeted with a decent cargo space; up to 380 litres, which is suitable for storing luggage bags on the odd road trip up North, and more than sufficient for your weekly grocery run.

The boot floor is also height-adjustable, which comes in handy should you need to store bulkier or taller items, such as golf bags. And if you need even more space, simply flip down the 60:40 split rear seats for added real estate.

Hitting The Fairway in Style 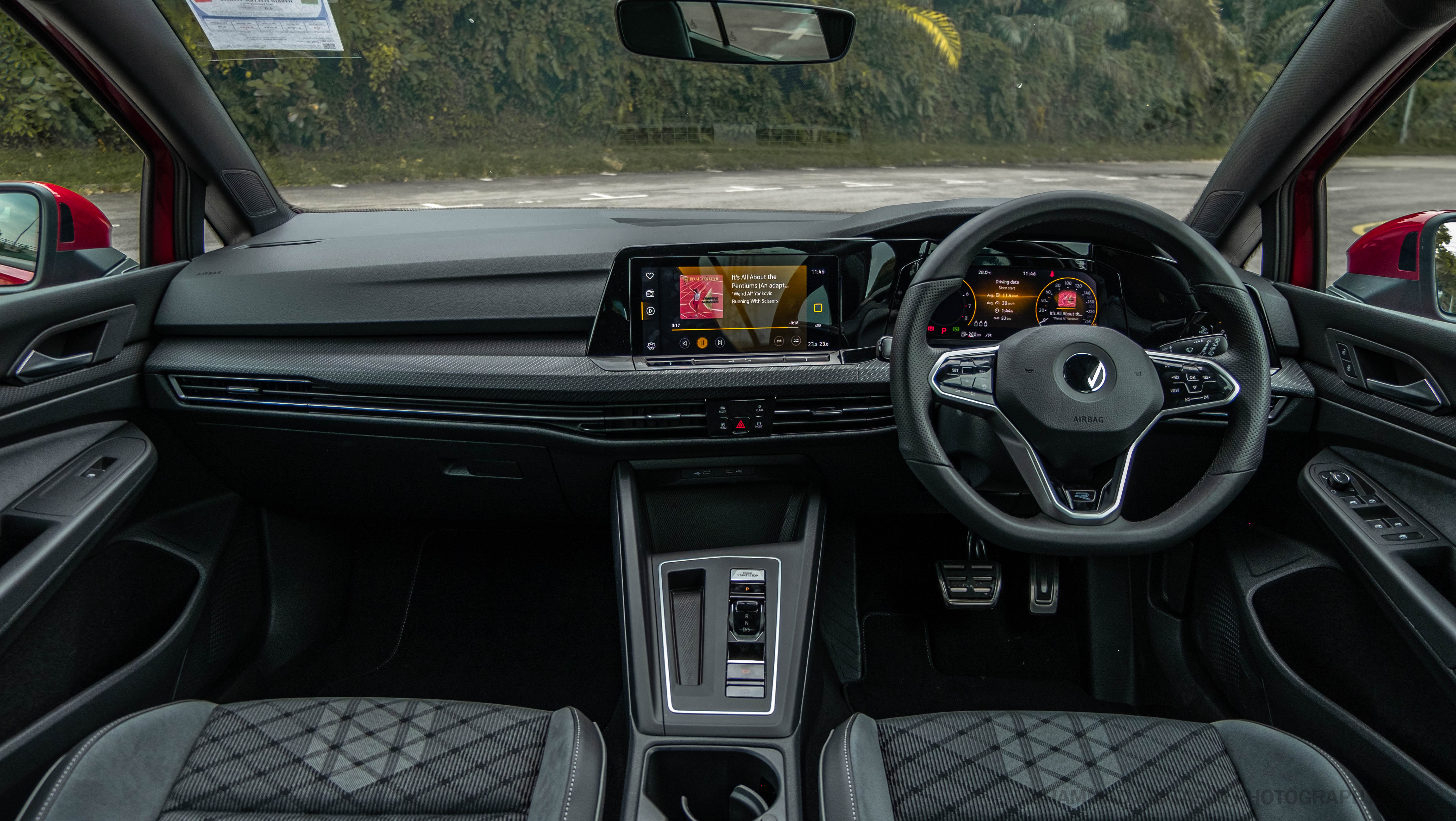 Hopping inside the cabin proper, you'll find that Volkswagen has done their best to make this latest iteration of the Golf feel as upmarket as possible. Soft-touch materials dominate all the major touch points, and the centre console switchgear has been minimised to free up as much space as possible. 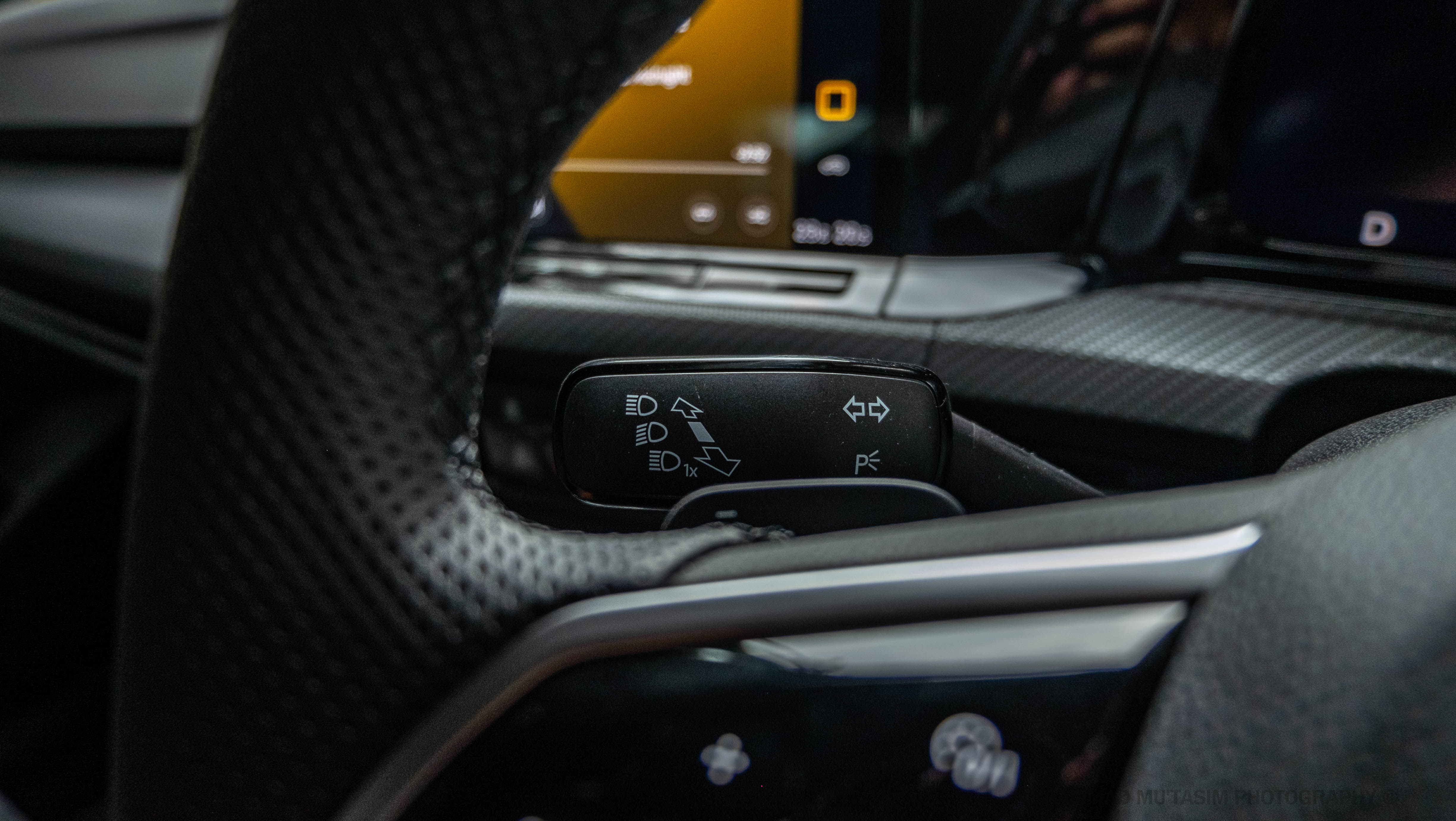 As Motorist's resident pedant, I was delighted by the super tactile feel of the Golf's signal stalks. While many other cars try to get away with cheap and hollow plasticky stalks that feel downright depressing to use, the damping on this one feels positively premium and on point. And the steering wheel? Well-weighted with supreme levels of grip.

Two high definition displays fill your line of vision: the 10.25-inch Digital Cockpit Pro dash display just beyond the wheel, and the 10-inch Discover Pro infotainment screen on the centre dash. Both are responsive and easy to navigate, although you'll probably need to have an advanced diploma to figure out how to disable the ESC system.

But things do get more frustrating beyond this. 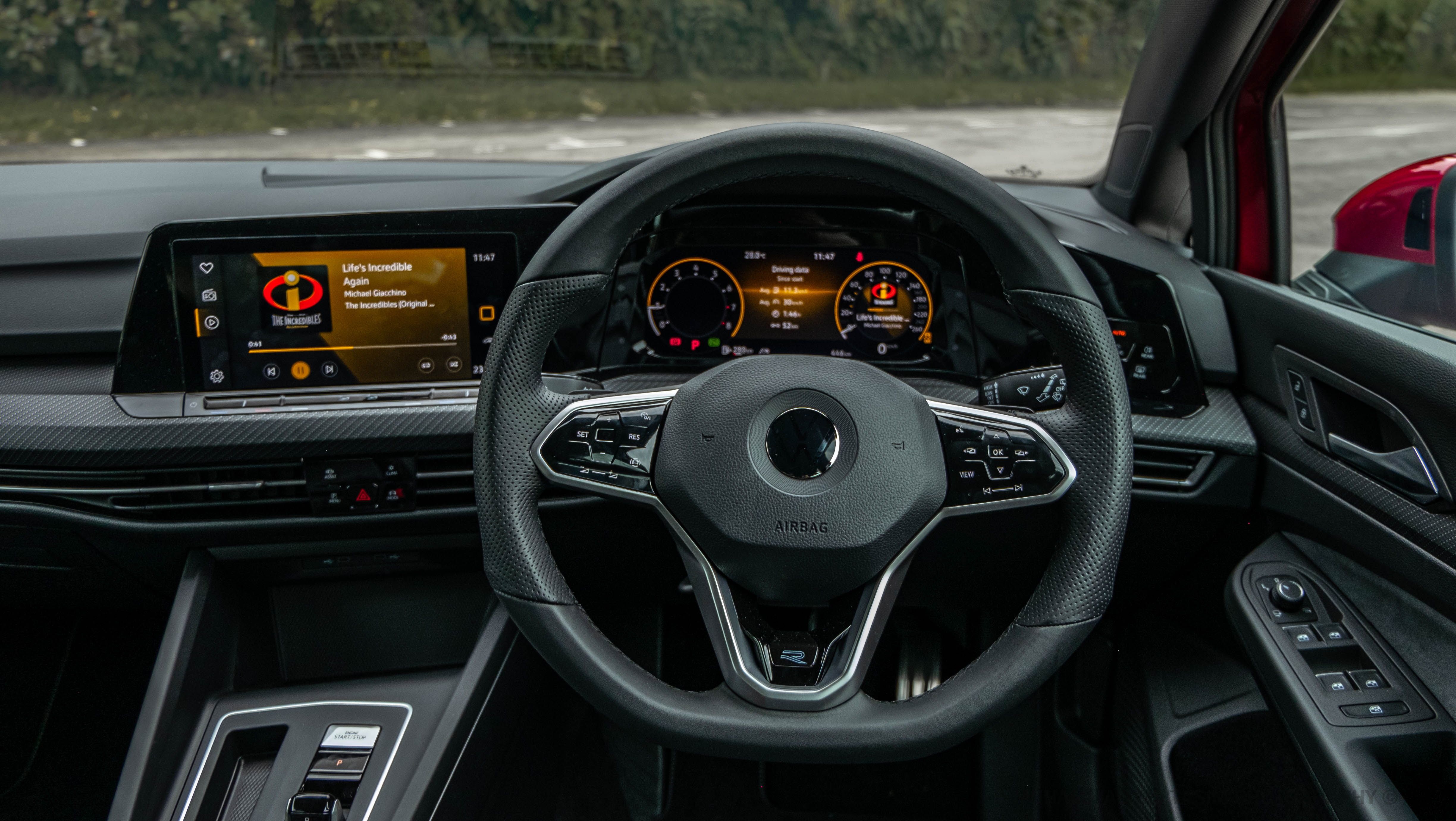 HVAC controls are now positioned just under the infotainment display, through a reflective black plastic capacitive panel. Not only is it hard to get used to, it is rendered almost unusable should you attempt to operate it at night or in the dark. With zero backlighting on the panel, the icons are practically invisible to the eye. 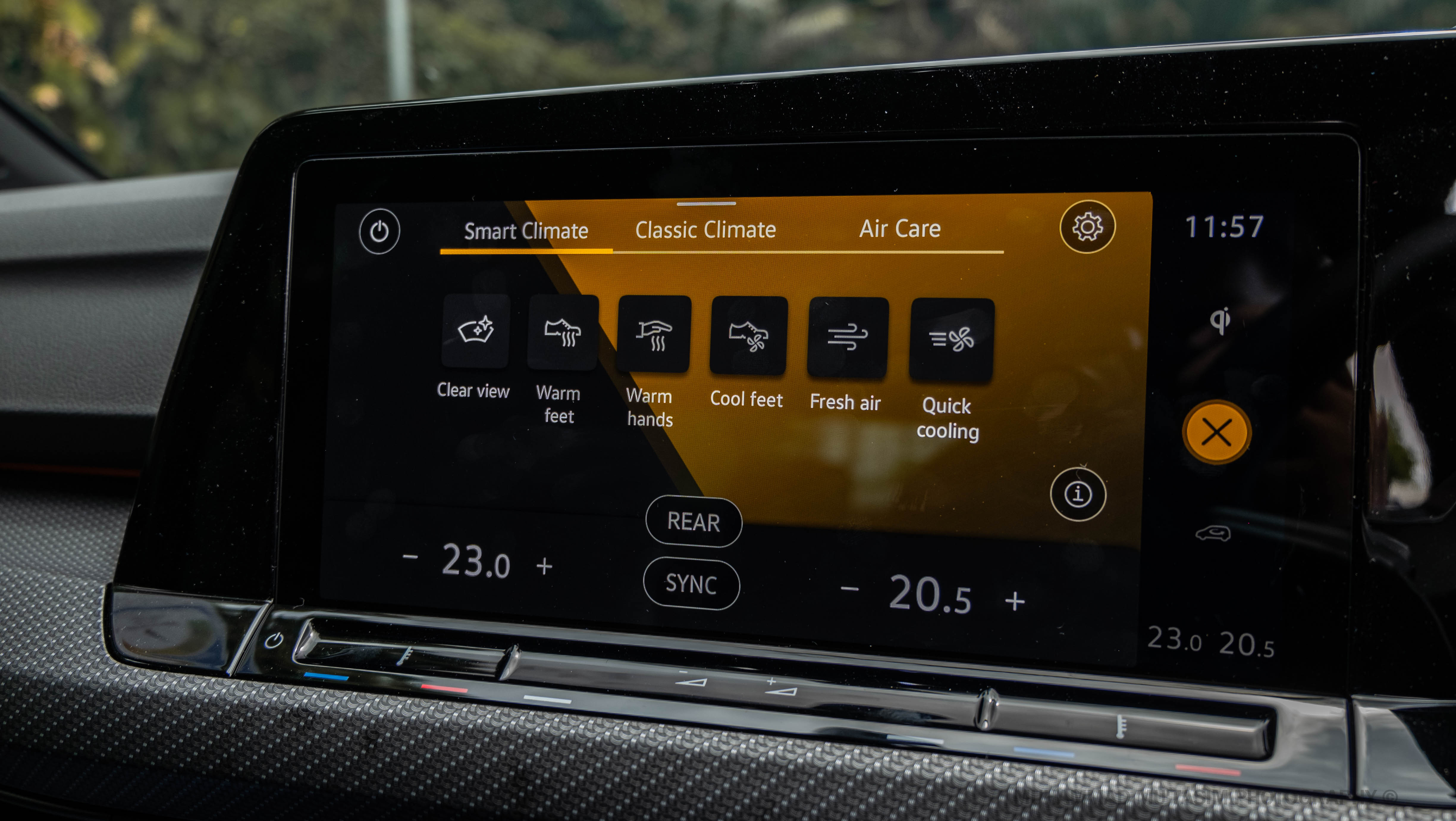 You do have the option of tweaking with the HVAC settings via the infotainment screen if it gets too frustrating. But this also means that your eyes will be away from the roads when you want to use it while driving. We hope that Volkswagen will bring back physical dials and buttons in future iterations of the Golf.

On a more positive note, the Golf Mk8 comes with Air Care Climatronic, which is essentially a three-zone automatic climate control with allergen filter and controls for rear occupants. Quite useful, then, in keeping the cabin free of harmful particulates.

It also has four USB Type C ports – two at the front and two behind – as well as a wireless charging pad. 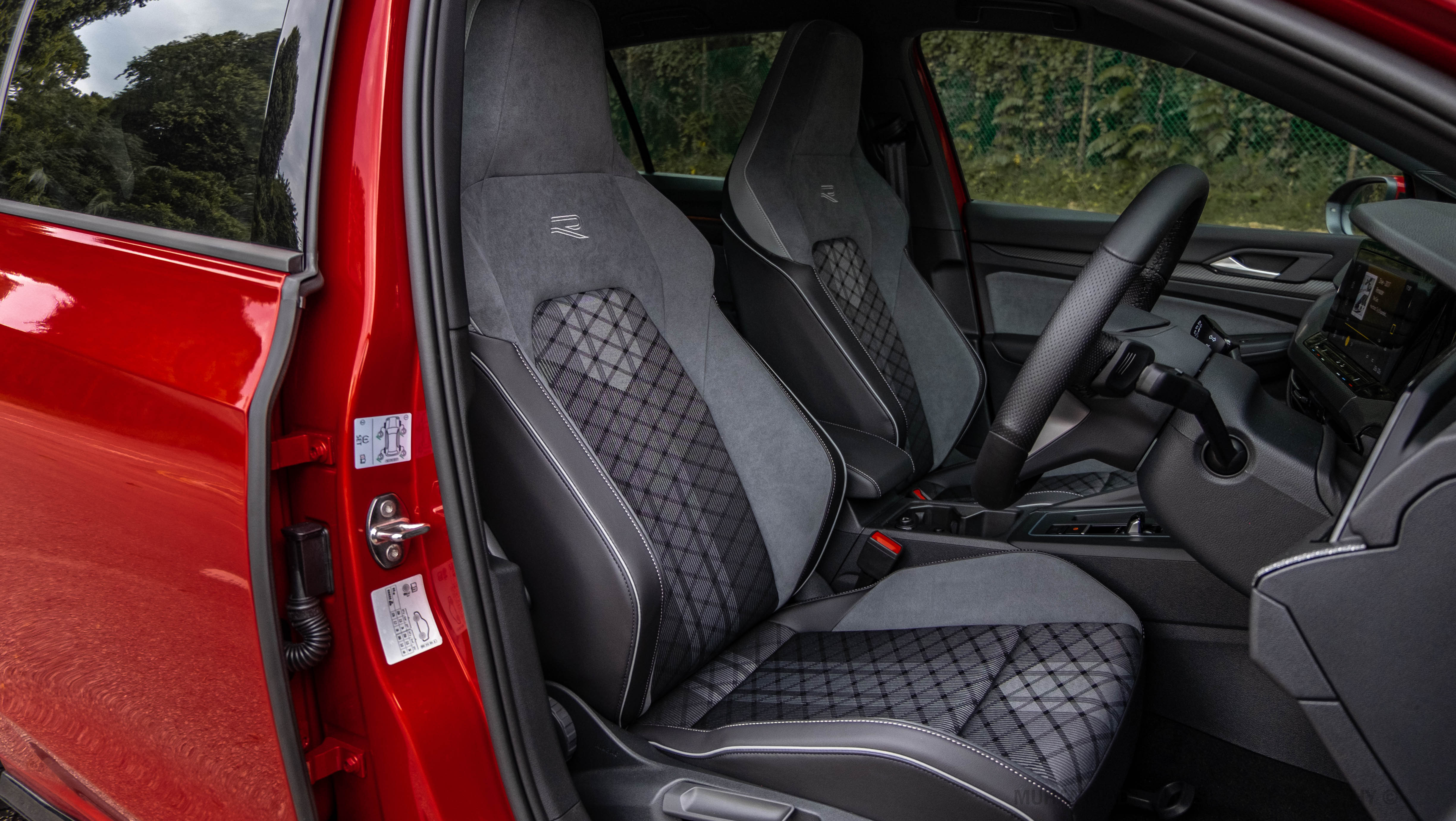 The Golf R-Line cabin's also wrapped with Sardegna fabric and Art Velour microfleece upholstery, decked out in checkered patterns reminiscent of the iconic plaid upholstery found in Golf GTIs across generations. The equipped R-branded sports seats are also snug and comfortable to sit in, yet firm enough to prevent you from flying off when cornering hard, quite literally.

Rear seats are also rather comfortable, with enough legroom and headroom for up to three full-size adults, though we recommend leaving the middle seat unoccupied for maximum comfort. There is a pair of AC blowers and temperature controls available for rear occupants, which are mighty useful in climates such as ours.

Tailor-Made For Stability on Straights and Corners 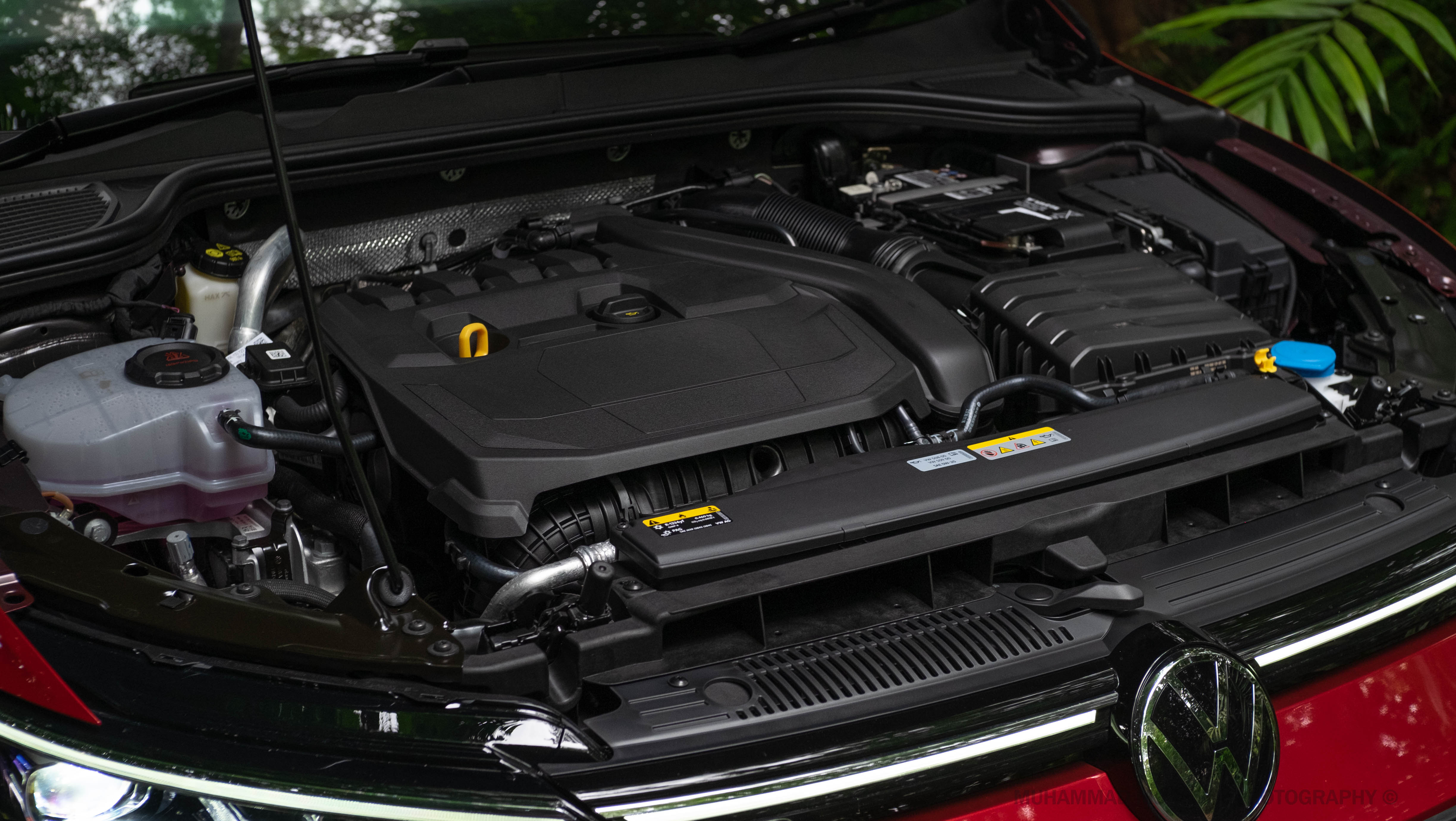 Getting up to speed in the Golf R-Line is not an issue at all, with its responsive throttle and engine. Power comes from its 1.5-litre EA211 turbocharged four-cylinder eTSI heart, producing a healthy 150 horses and 250 Nm of torque. The powerband, which comes in at 1,500 rpm, makes the Golf feel a lot peppier than its numbers suggest. And with a rapid-shifting seven-speed DSG transmission in tow, the Golf R-Line will easily bring you to triple digit speeds in a jiffy.

Its potent engine is also mated to a form of mild hybrid technology. According to Volkswagen, energy stored in its 48 V lithium-ion battery supplies both the vehicle electrical system and a 48 V belt-driven starter-alternator. With this, the electric motor gives the car some additional power when moving off, thus improving off-the-line performance and lowering emissions.

If you're wondering about fuel economy, you'll be glad to know that the Golf R-Line clocked 15 km/l during our time, which is just under the official 20.8 km/l claimed figure from the manufacturer. However, with sensible driving and light-footed acceleration, we are confident that the official claims can be achieved. 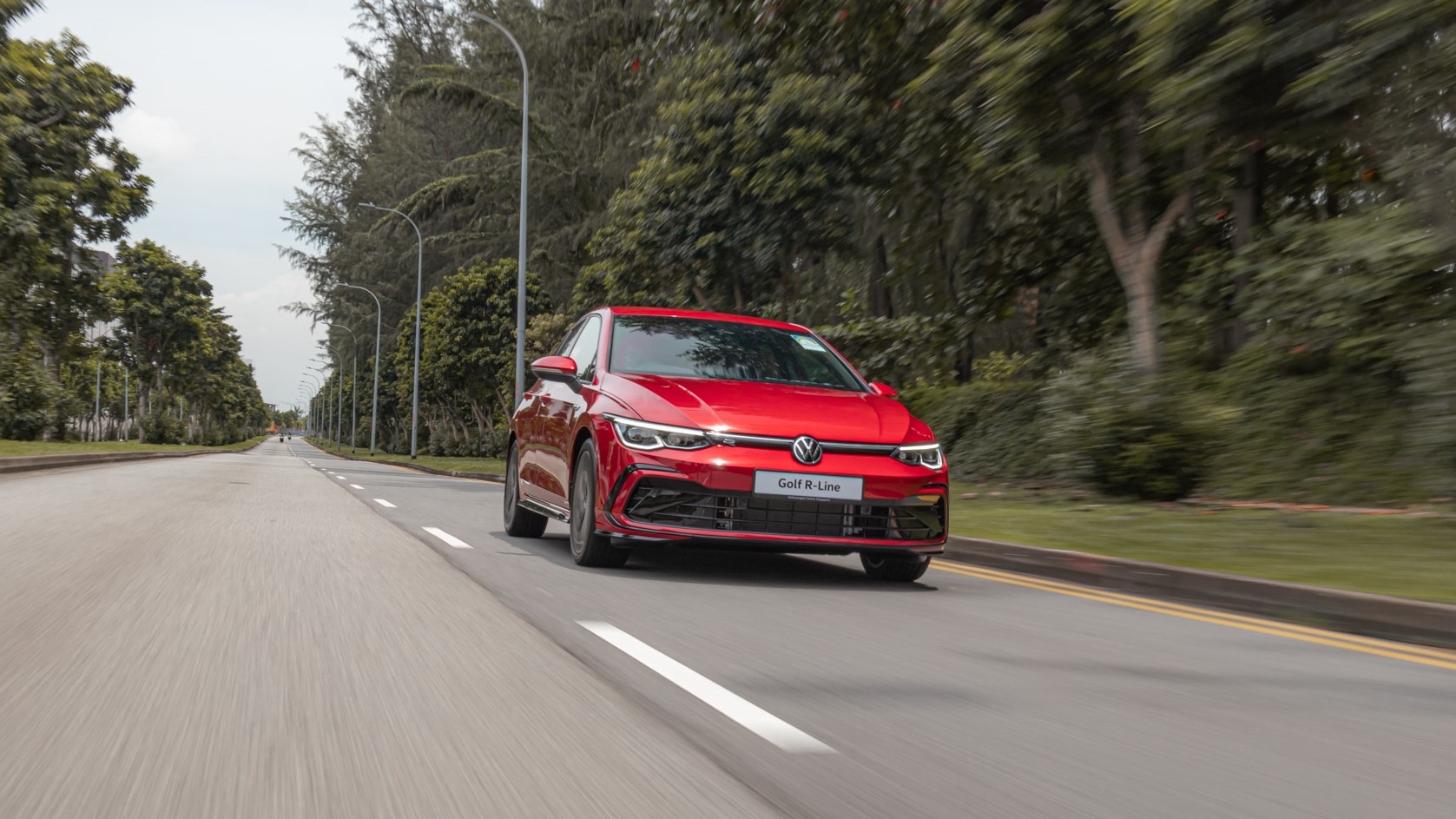 You're not going to set blazing quick lap times with the R-Line, with a century sprint timing of 8.4 seconds. However, that doesn't mean you won't have any fun. On the contrary, you'll find that the VW boffins over at Wolfsburg have fine-tuned it for high levels of driving pleasure. 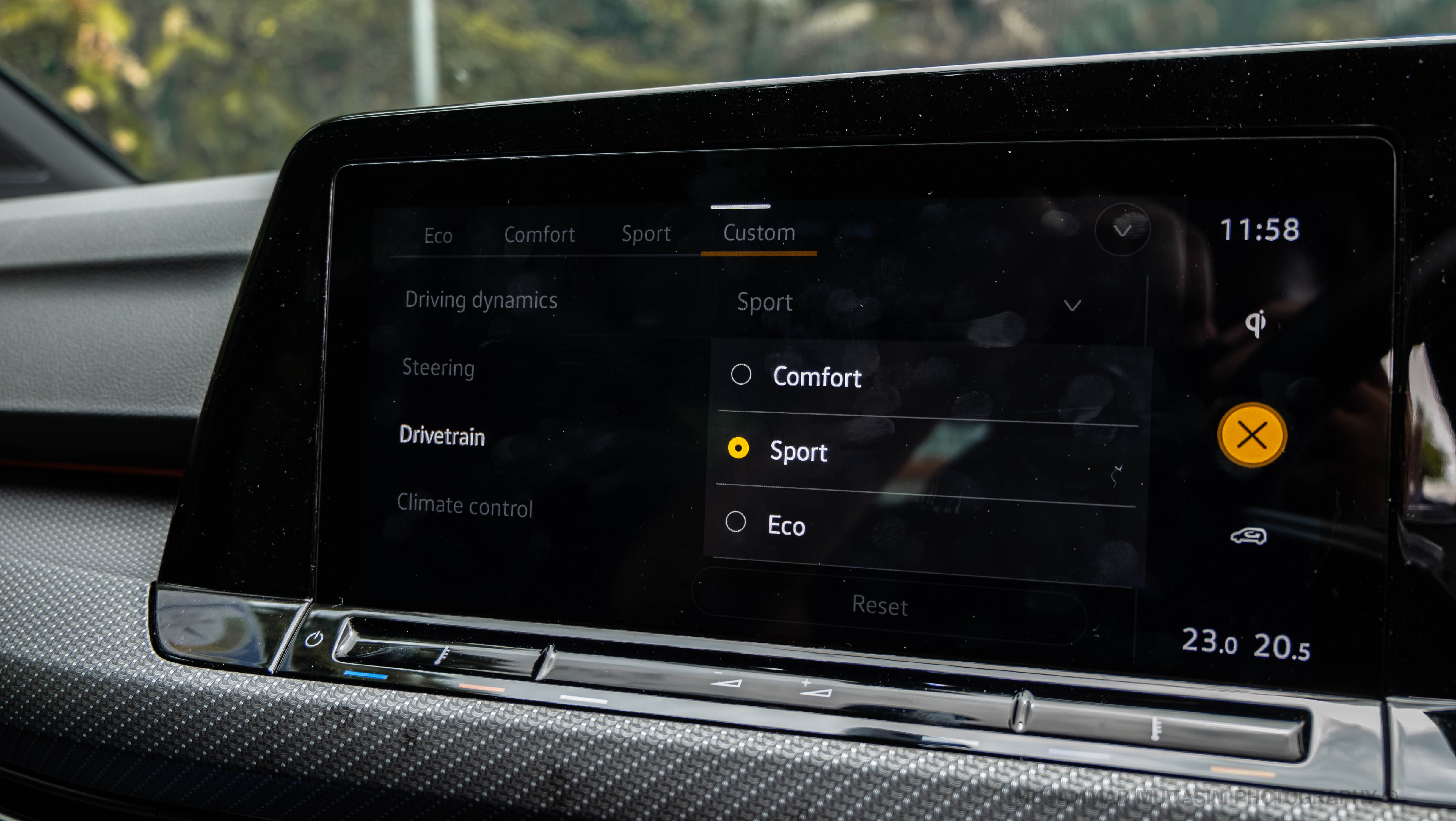 It is balanced, and we found very minimal body roll when attacking tight bends, thanks to the competent MQB Evo platform on which it sits. And with the multi-link independent rear suspension, the tail-end of the Golf remains stable on rough and patchy terrains, keeping the car in sync with the front. The steering wheel, too, feels nicely weighted at higher speeds, while providing enough feedback to the driver on what the front wheels are doing.

You can also change up the car's driving characteristics through the various driving modes, with Sport stiffening up the chassis and suspension dampers to allow for more performance-oriented driving. 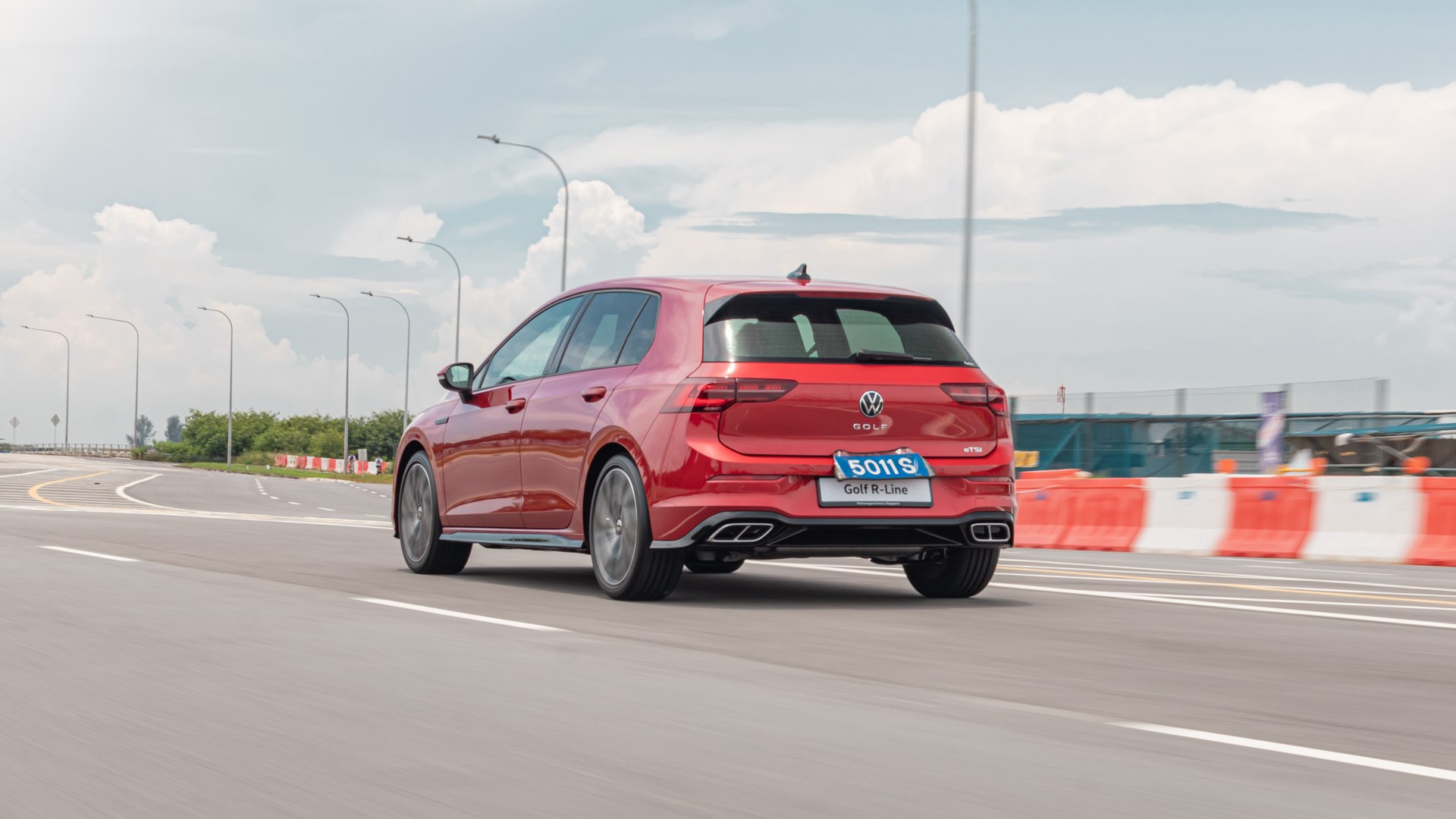 And as expected from a competent VAG product, NVH levels are ridiculously low. We oftentimes found the travelling speed to be a tad enthusiastic because of this. For legal reasons, we travelled at LTA-friendly speeds at all times. 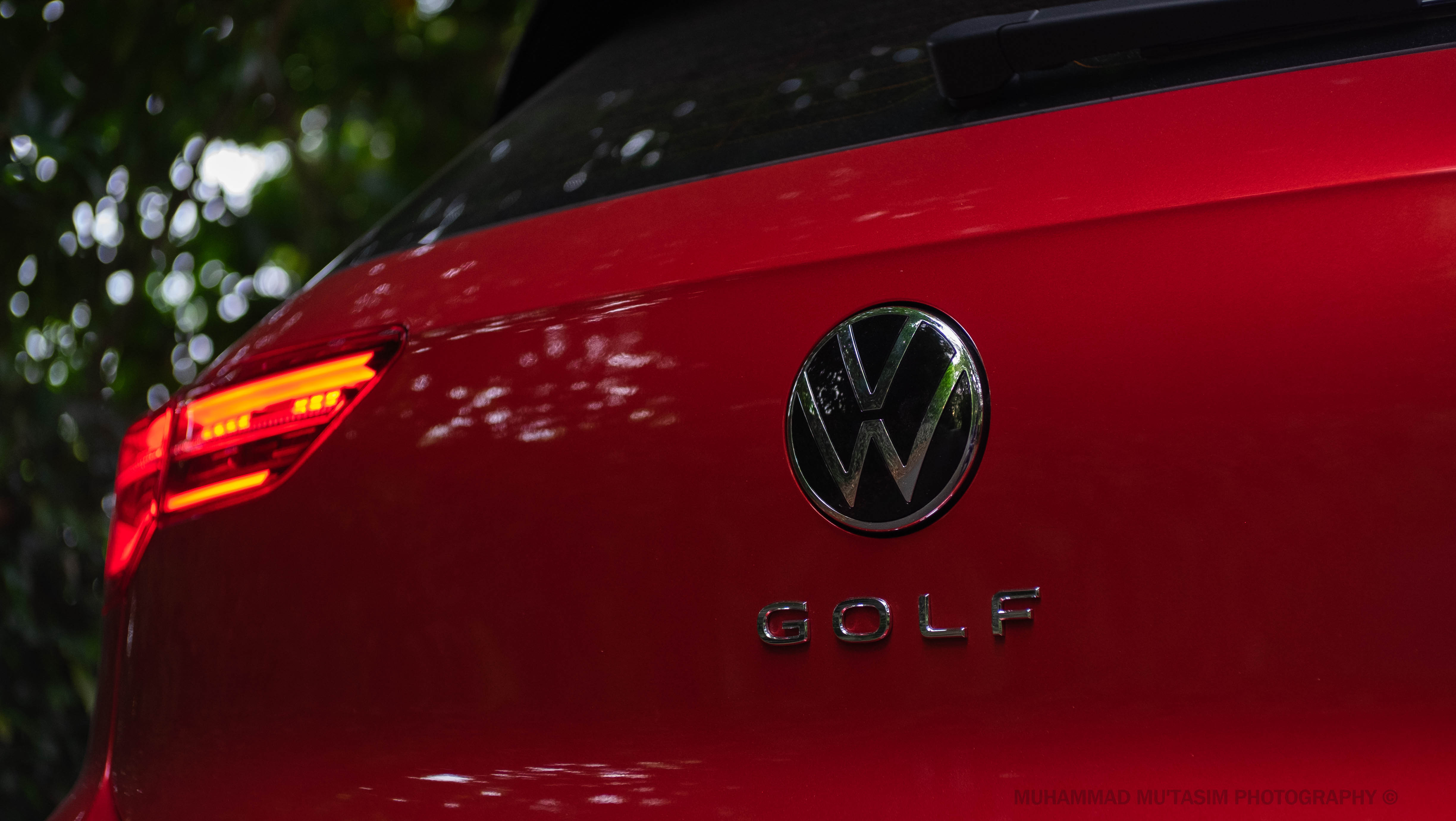 As far as driving dynamics go, the Golf R-Line is one of the better performers this year. It is evident that despite playing second fiddle to the GTI and R, the R-Line holds its own when pushed to the limit. It handles well, feels premium in the right places, and is equipped with all sorts of bells and whistles to keep you happy.

With the exception of the iffy HVAC controls, this is one of the most comprehensive warm hatches in the market today, and deserves to be in your radar.