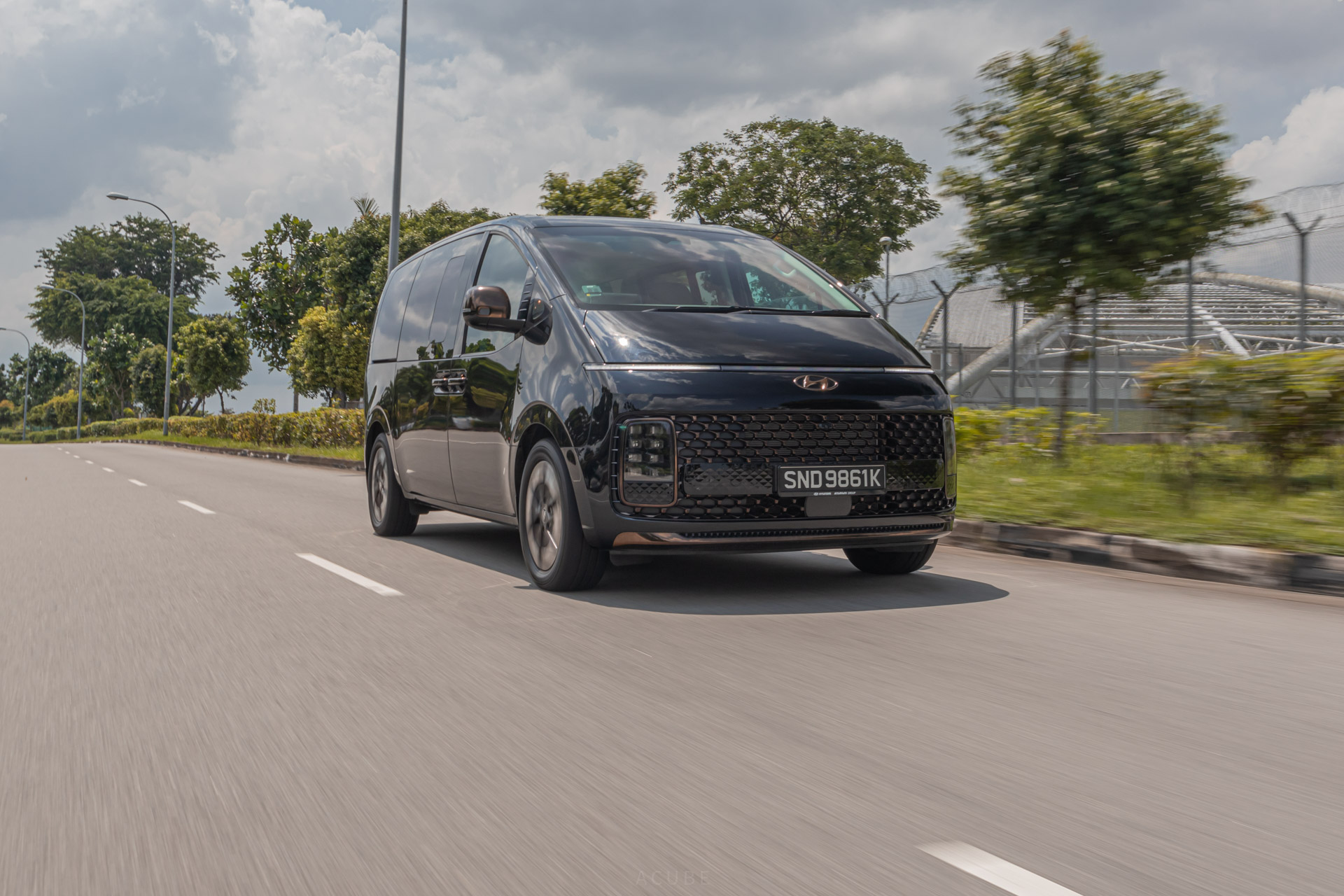 I’m sure we’ve all heard the old adage “You can live in a car but you can’t drive a house” and for the most part that’s true. Houses simply aren’t drivable, well at least, until now.

Allow me to introduce you to the Hyundai Staria. It is Hyundai’s version of what Kia calls the Grand Utility Vehicle (GUV) [although Hyundai just calls it an MPV] and is essentially the sister car to the Kia Carnival. But tl;dr, having now tried both, of the two, I am just unabashedly drawn to the Staria. 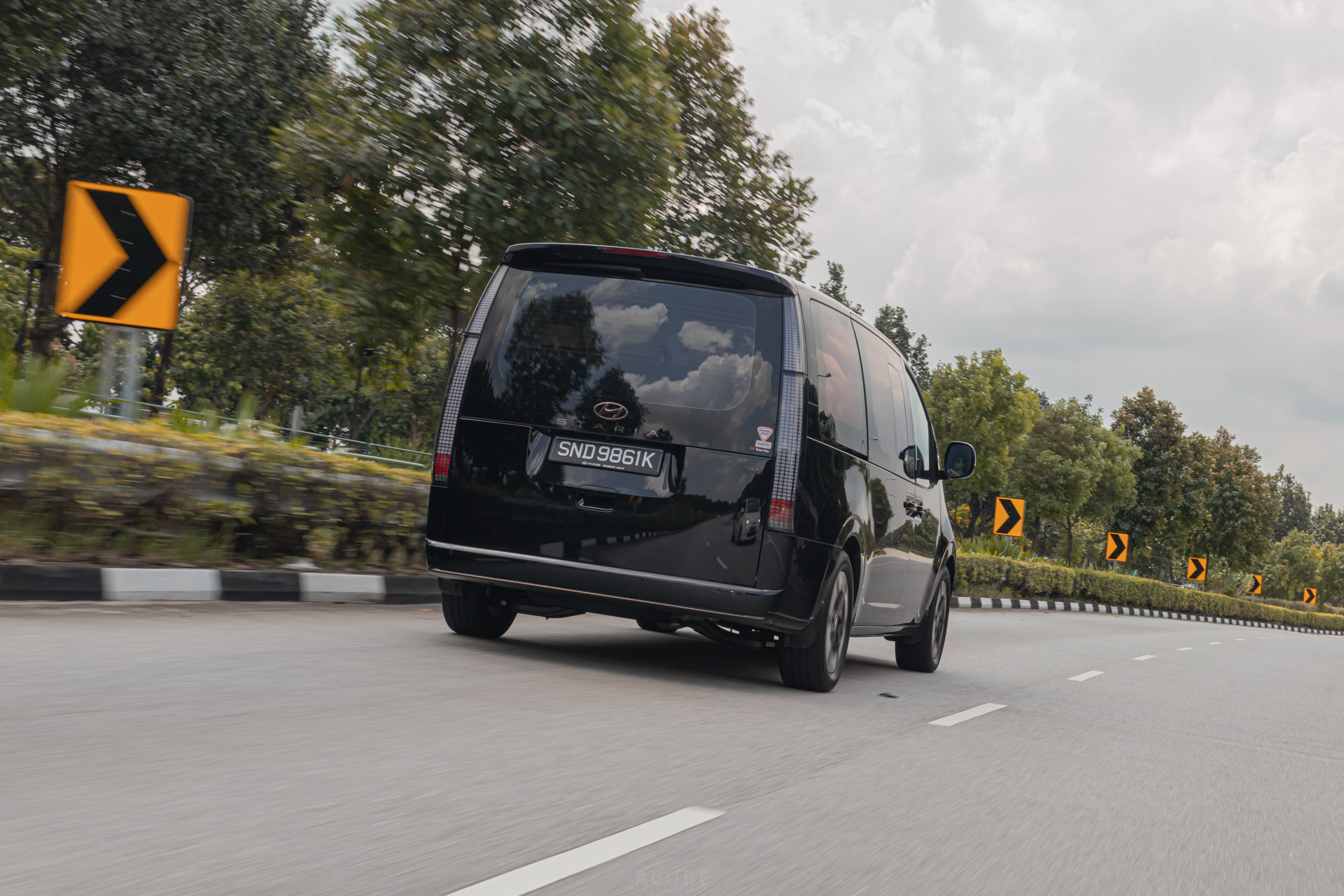 As for why? We’ll start with the looks. Hyundai’s design team has been on an absolute roll recently, churning out bangers left right and centre like the Ioniq 5, as well as the RN22e and N Vision 74 concepts. The buck didn't stop either when Hyundai was drawing up the Staria because this is easily the best-looking people-mover on the planet.

The front of the Staria is the biggest talking point of the exterior, it just looks completely different from anything else plying the roads. It looks like it’s still a concept car from a movie rather than an actual production vehicle. The full-length light strip across the front makes the car look very RoboCop or even a little spaceship-y. Combined with the massive bronze front grille, the Staria’s front silhouette is literally a wall of car only broken up by that huge light strip and the LED headlights which makes the Staria look rather imposing on the roads. 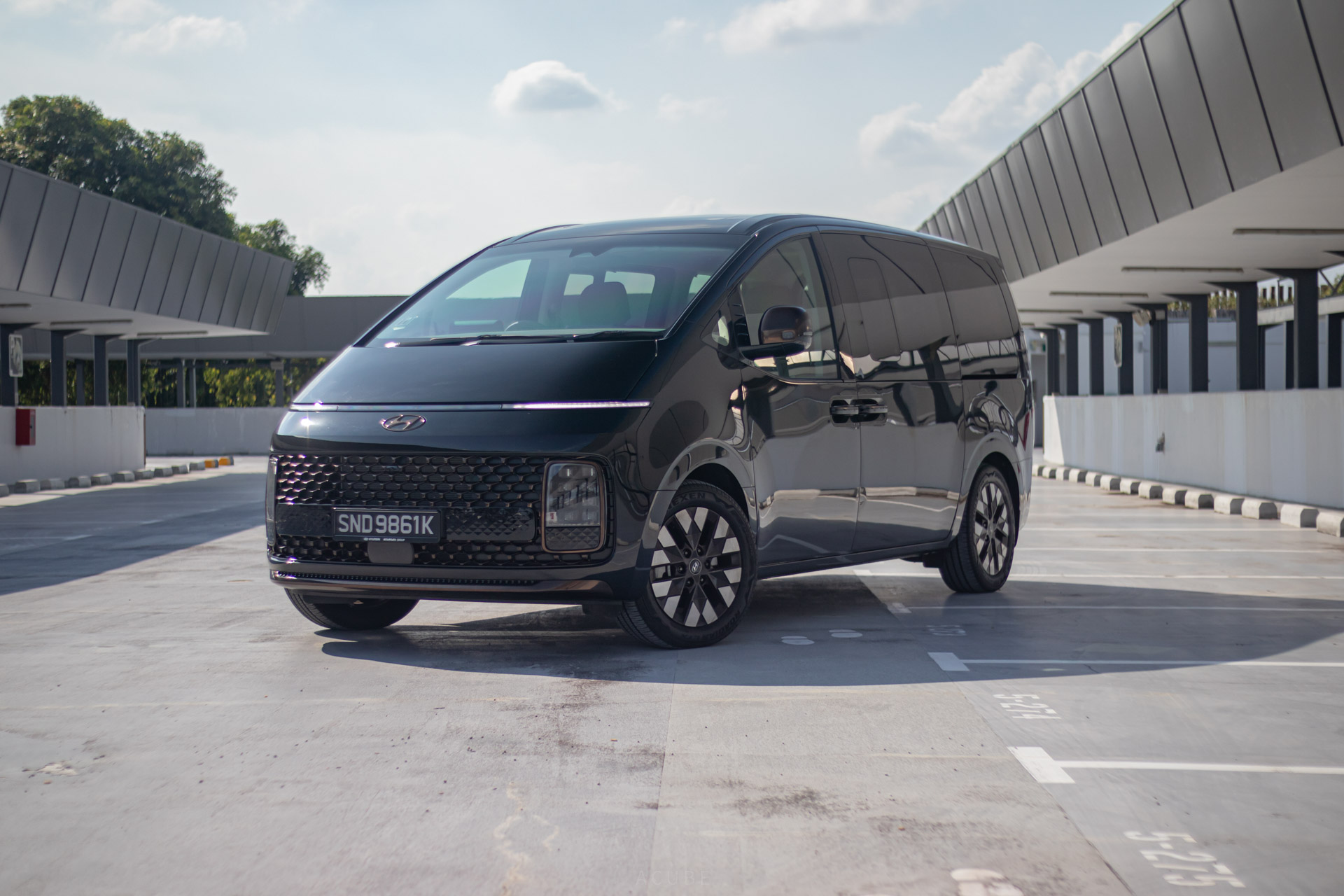 Along the side, the hulking slab of car continues, the Staria is over 5.2m long and it makes every centimetre of that length very apparent. Everything is supersized, the mirrors, the windows, the electric sliding door. If you stand next to it, the car literally fills up your entire peripheral vision, it’s massive.

The rear of the car is equally as funkily titanic. The taillights are stacked up the height of the car and made up of these LED cubes that continue to run with the Staria’s retro-futuristic look. It’s a fantastic design and I cannot overemphasise how much Hyundai has hit it out of the park with this design. 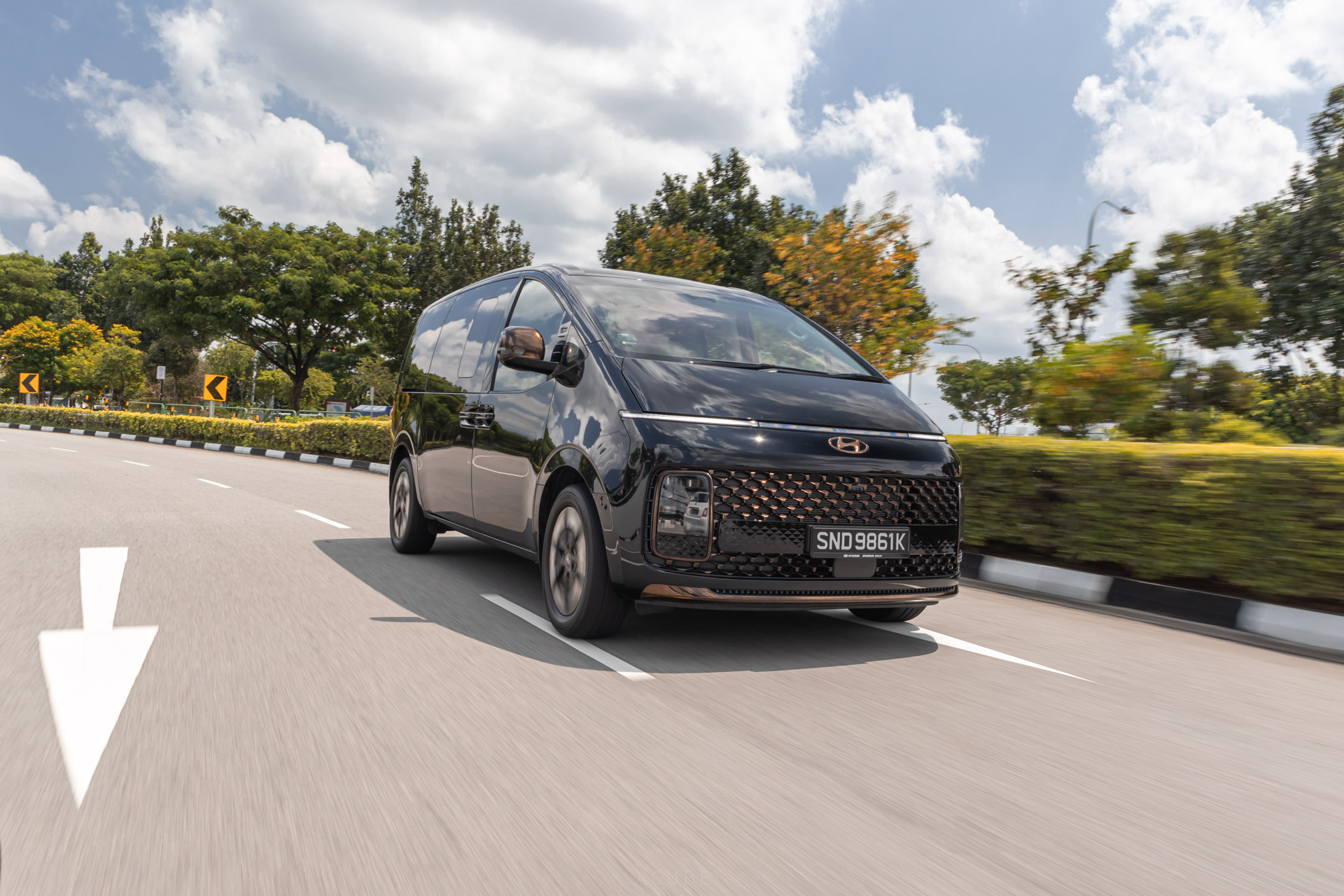 Back to functionality, don’t underestimate how far back you need to stand when opening the boot lest you get smacked in the face by the garage door of a rear tailgate. The boot itself isn’t actually that big because of the third row but you can still easily fit several suitcases in here and if you need more space, the third row folds down albeit not flat.

So all that size is good for one main point, interior space and comfort and goodness gracious this thing is spacious and comfortable. The third row is a cinch to climb into, you can literally walk past the second row and into the back. And unlike most other three-row cars, sitting back here is hardly a punishment. 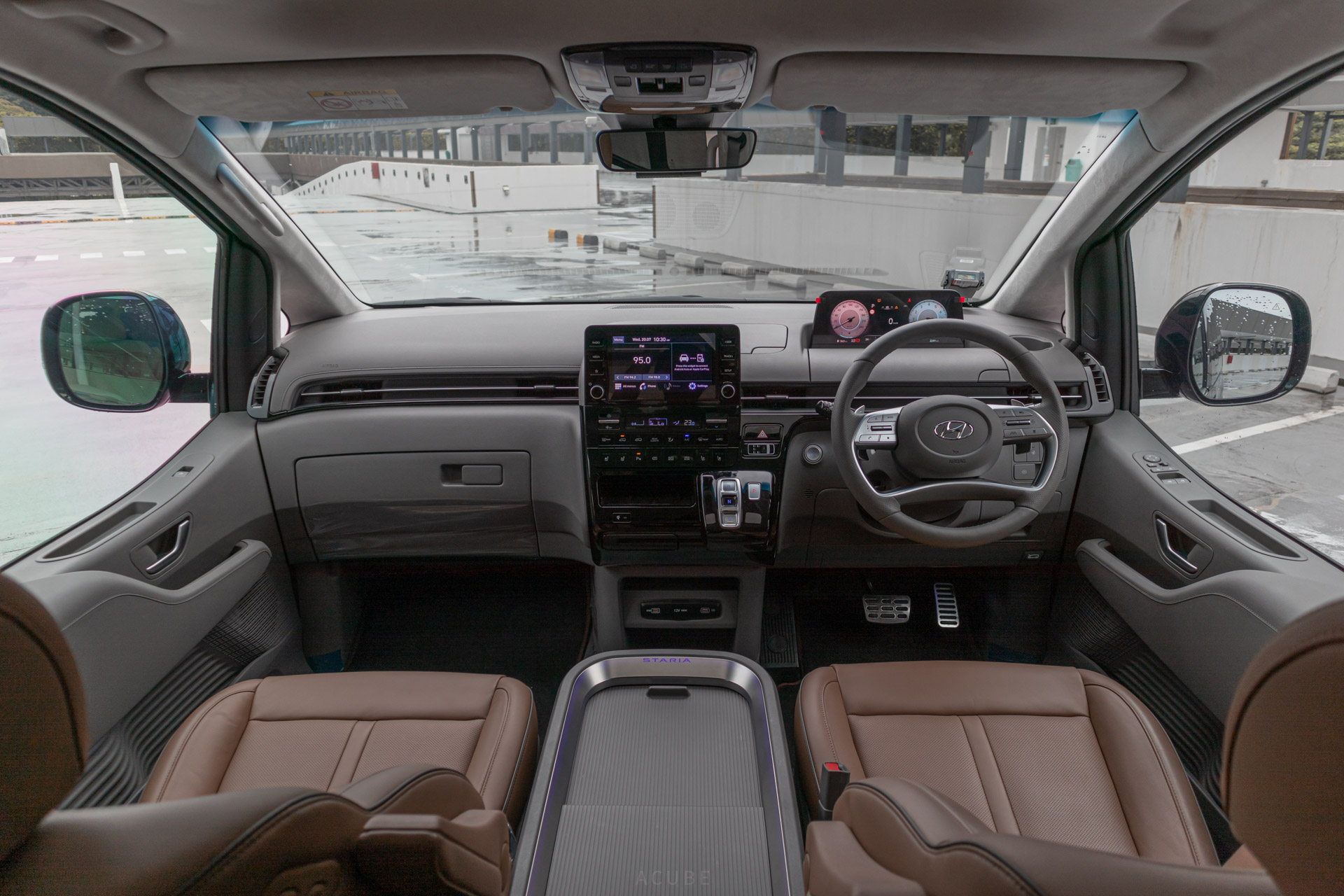 There’s more space back here in the Staria than most cars have in the second row. God forbid you ever have a hoarse throat and you need to talk to the driver because from back here you genuinely need to speak up for those in front to hear you. Other than plenty of space, third-row occupants get cup holders, USB ports, air-conditioning vents, and even a small push-out window if you need some fresh air.

Now on to the second row, the meat and potatoes of the Staria experience. Unlike the Carnival, the Staria is only available in the seven-seater configuration with the captain’s chairs in the middle row and good on them for it because these are some of the most comfortable seats in the world. Each seat is both heated and cooled, and can be moved not just forwards and backwards, but left and right as well. But the real fun is when you press the button that puts the seat into what Hyundai calls “relaxation mode” but what I dub “dentist chair mode”. 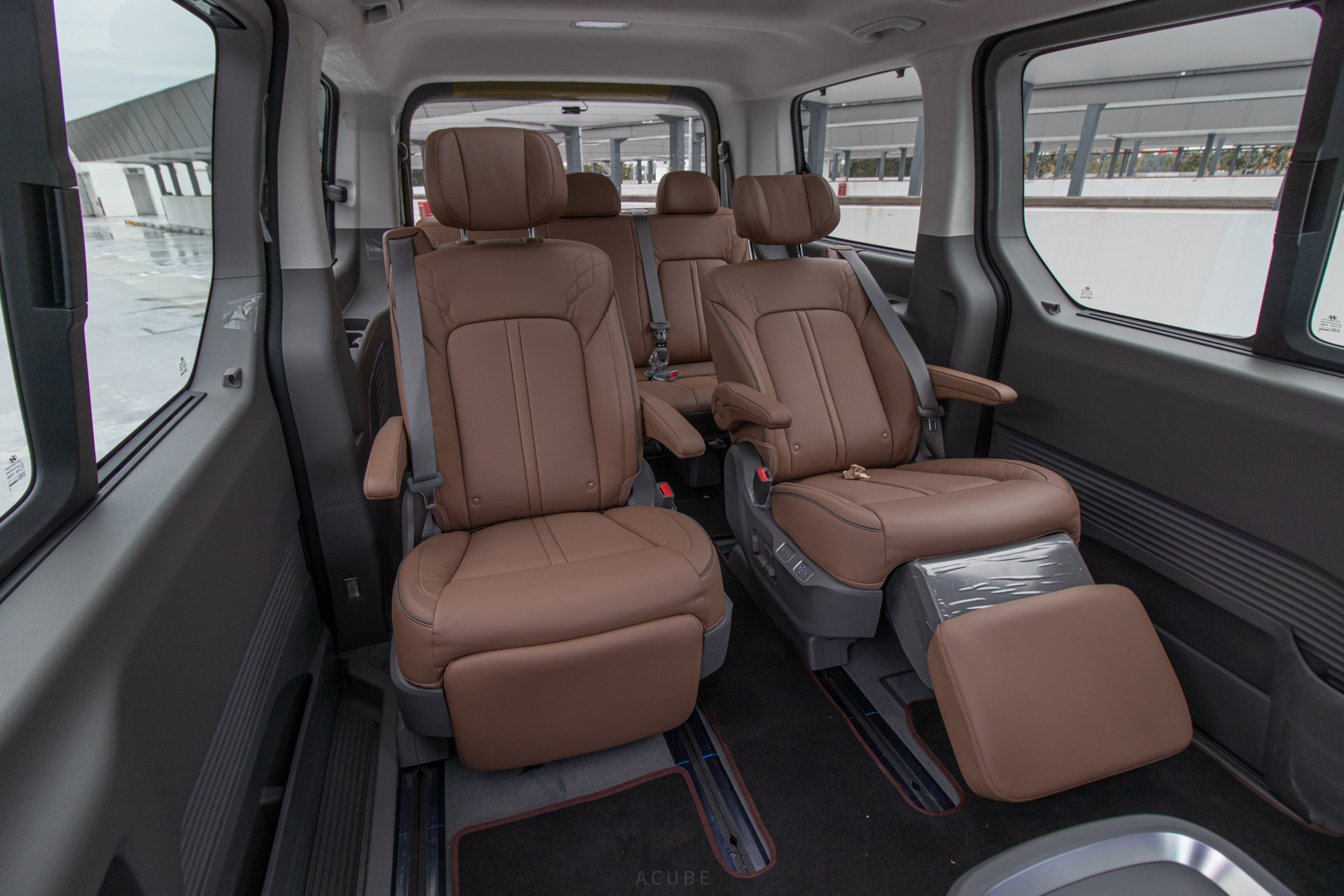 The seat reclines all the way and cradles you in supreme comfort, lift up the leg-rest and you’re now in a business class seat in your Hyundai Staria, wafting along as you gaze out the moonroof. If you’re bored of the view and you want some shut-eye, you can pull down all the window shades, close the roof shade, and you’ve got yourself the world’s biggest nap pod. Other than the Carnival, there is really no other car quite like this.

You might think that with how good the rear seat occupants get it, the front might be the worst place to be, and while it certainly isn’t as comfortable as the lounge seats behind, it’s hardly sparse up front. The front seats are both fully electric and also heated and cooled. The driver also gets a fully digital gauge cluster and an 8” infotainment system with Android Auto and Apple CarPlay. You also get a wireless charging pad and two more USB ports. 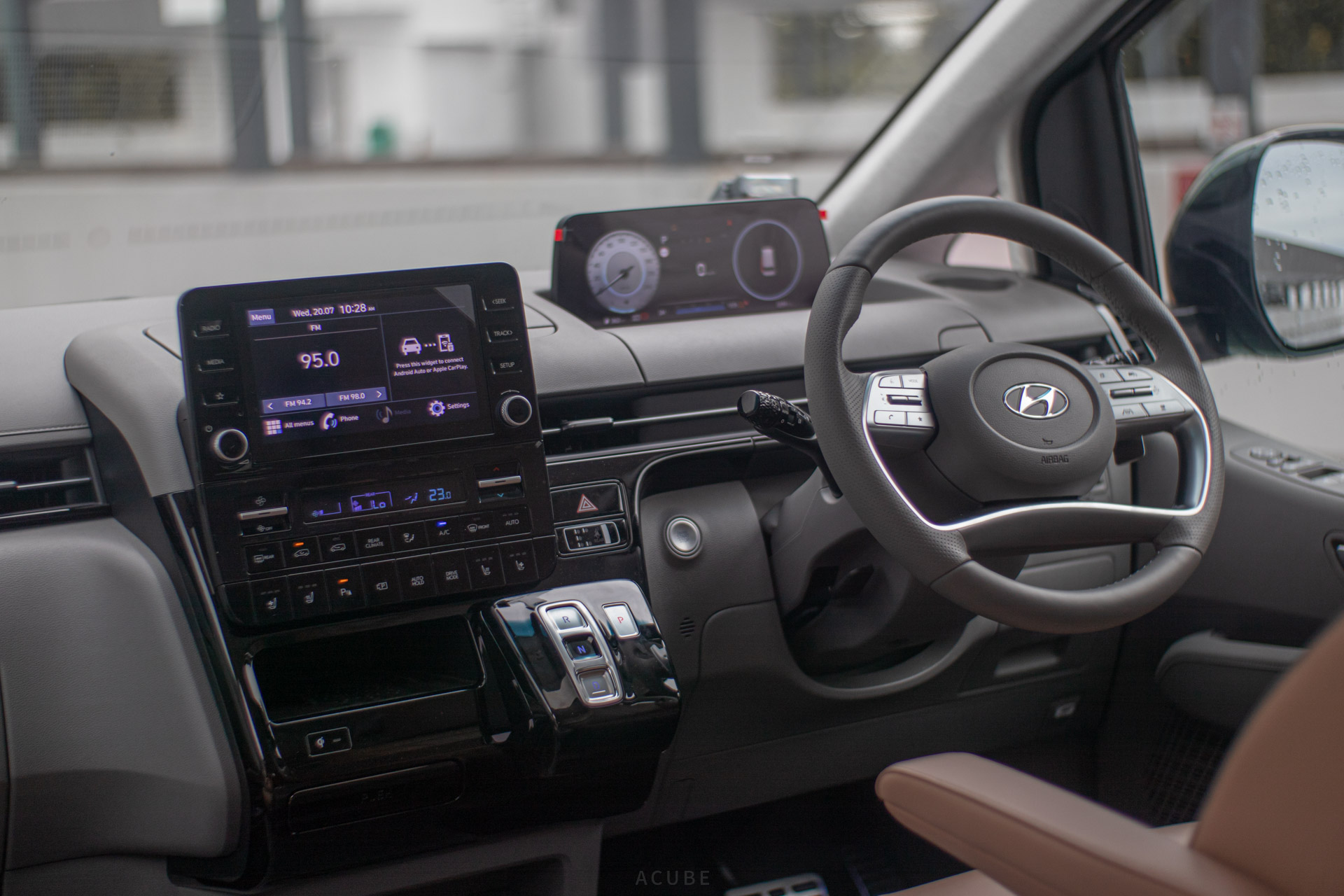 The Staria also has a frankly comical amount of internal storage spaces, there’re two huge door bins and a shallow tray in each door, a glove box in front of the gauge cluster, one more behind the infotainment screen, as well as the actual glove box. There’re also several shelves below the climate controls in addition to the cavernous bin in the centre console.

Right finally, on to how the Staria is like in motion. The Staria is powered by a 3.5L V6 mated to an eight-speed automatic that makes 272hp and 331Nm of torque and drives the front wheels. That’s enough to propel this 2.2 ton behemoth from 0-100km/h in 8.9s and if you dare, you could top it out at 210km/h. 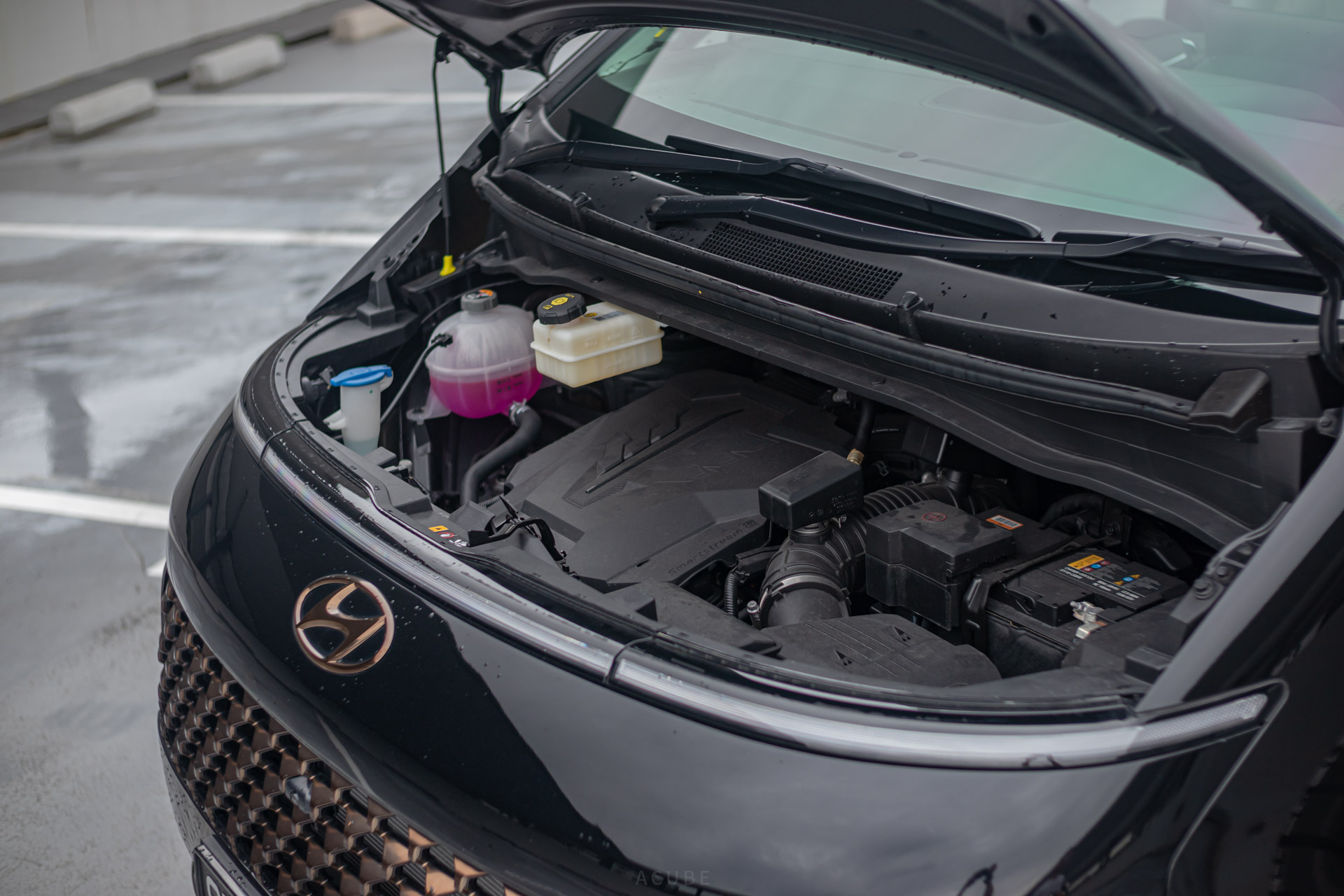 While driving, you honestly feel like you’re driving a bus or a van more than a car. Even on the seat’s lowest setting, you sit really high up and you tower over pretty much everything else on the road. It’s actually quite intimidating to drive if you’re not that confident especially when it comes to parking. Because of its size, the Staria takes up pretty much the entire width of a normal parking lot although thankfully there is a 360˙ camera to help with that. The turning circle is actually quite decent for a car of this size but that being said tighter turns and U-turns may still be a bit of a headache. While you’re on the road, the Staria does come with Hyundai’s full range of driver assistance systems to keep you safe and able to drive with minimal effort.

Performance-wise, while yes this does have a 3.5L V6, you can forget about anything sporty, that’s not the purpose of the Staria. You can feel all 2.2 tons of this tank and because you feel like you’re sitting on top of the front wheels, everything can feel a little lurchy if you start hustling it along. 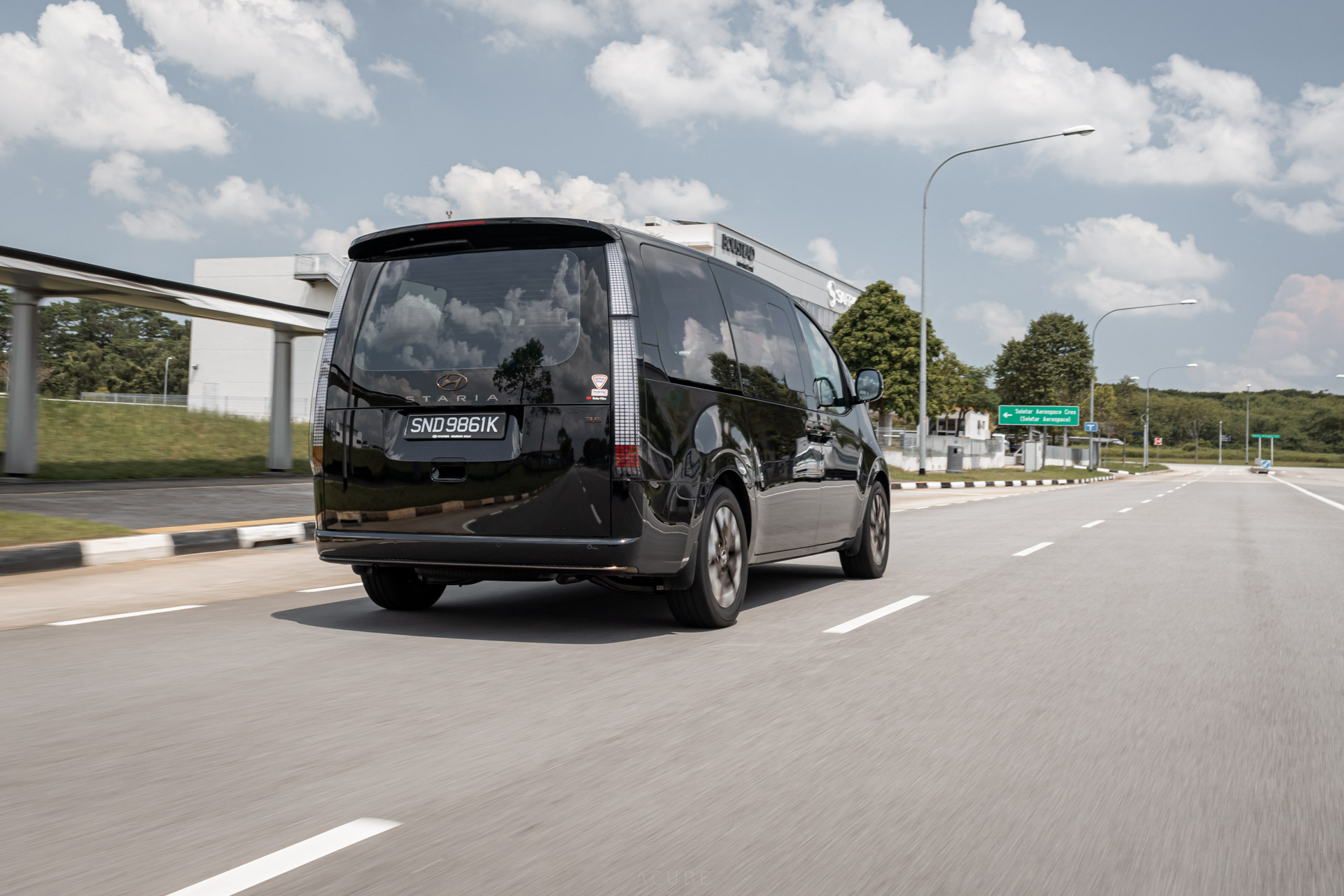 To explain what the Staria is made for properly, I would like to introduce a new term. The Staria belongs in what I call “towkay class”. Other cars in this class include the Carnival, as well as of course the incumbents, the Alphard and Vellfire. These cars are meant to either be driven in or to ferry your passengers in supreme comfort. And considering how every time I’m behind the wheel, all I can think of is how much I’d rather be in the rear instead, I think the Staria fits in perfectly.

If you'd like to test drive Noah's Ark for yourself, you can book a test drive of the new Hyundai Staria today!