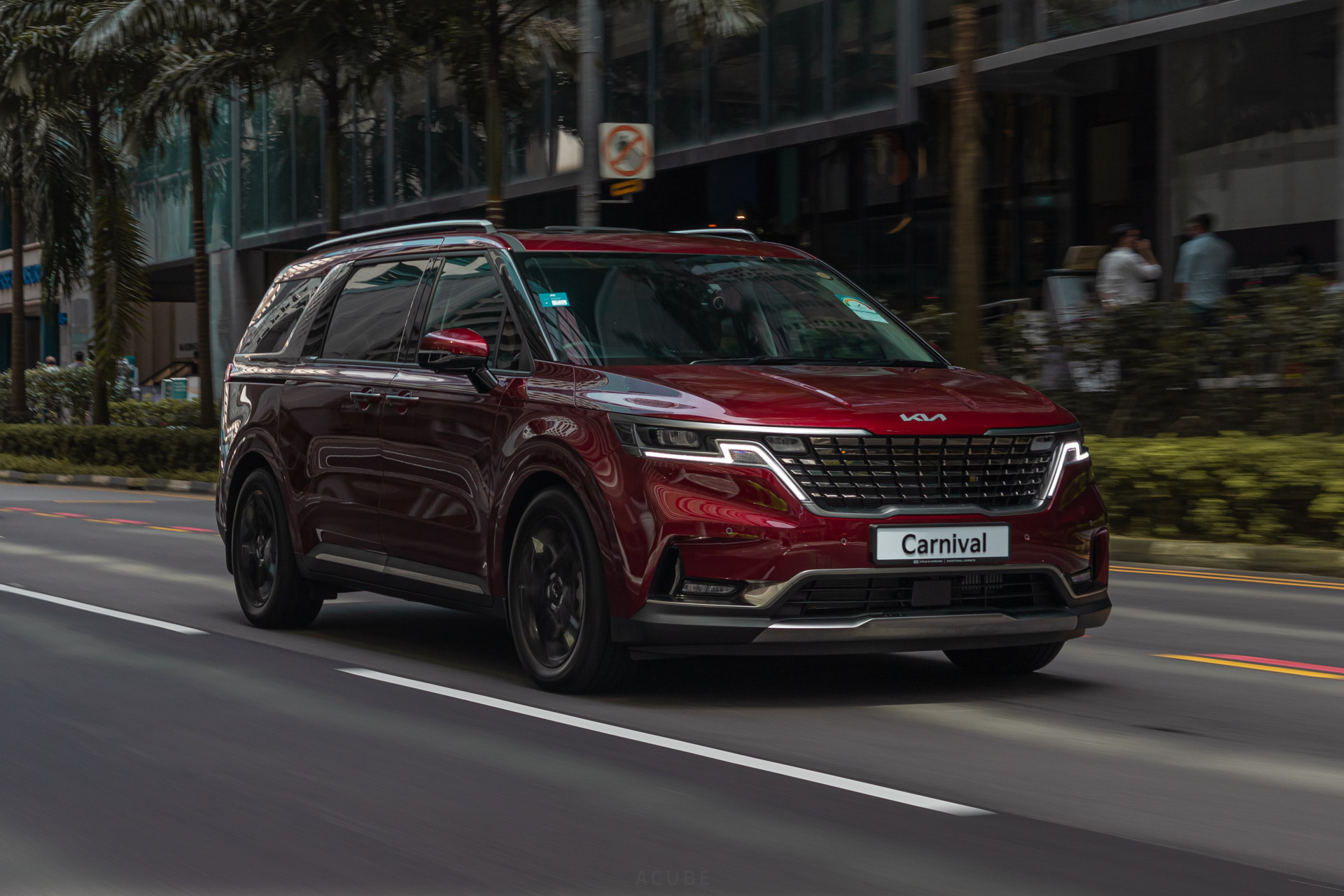 Singapore is a truly peculiar place for car ownership. With COE premiums at an all-time high now, buying a car is as good as buying a house. But what if said car is almost as big as one?

With their latest generation Carnival, Kia is offering exactly that: a behemoth of an MPV in every respect. While the design is inoffensive, it’s certainly contemporary and upmarket; par for the course with all the other models offered by the carmaker today.

This is not our first encounter with the Carnival, having reviewed the opulent seven-seater back in 2021. This time, we have our hands on the eight-seater variant. How different is it apart from one more seat? 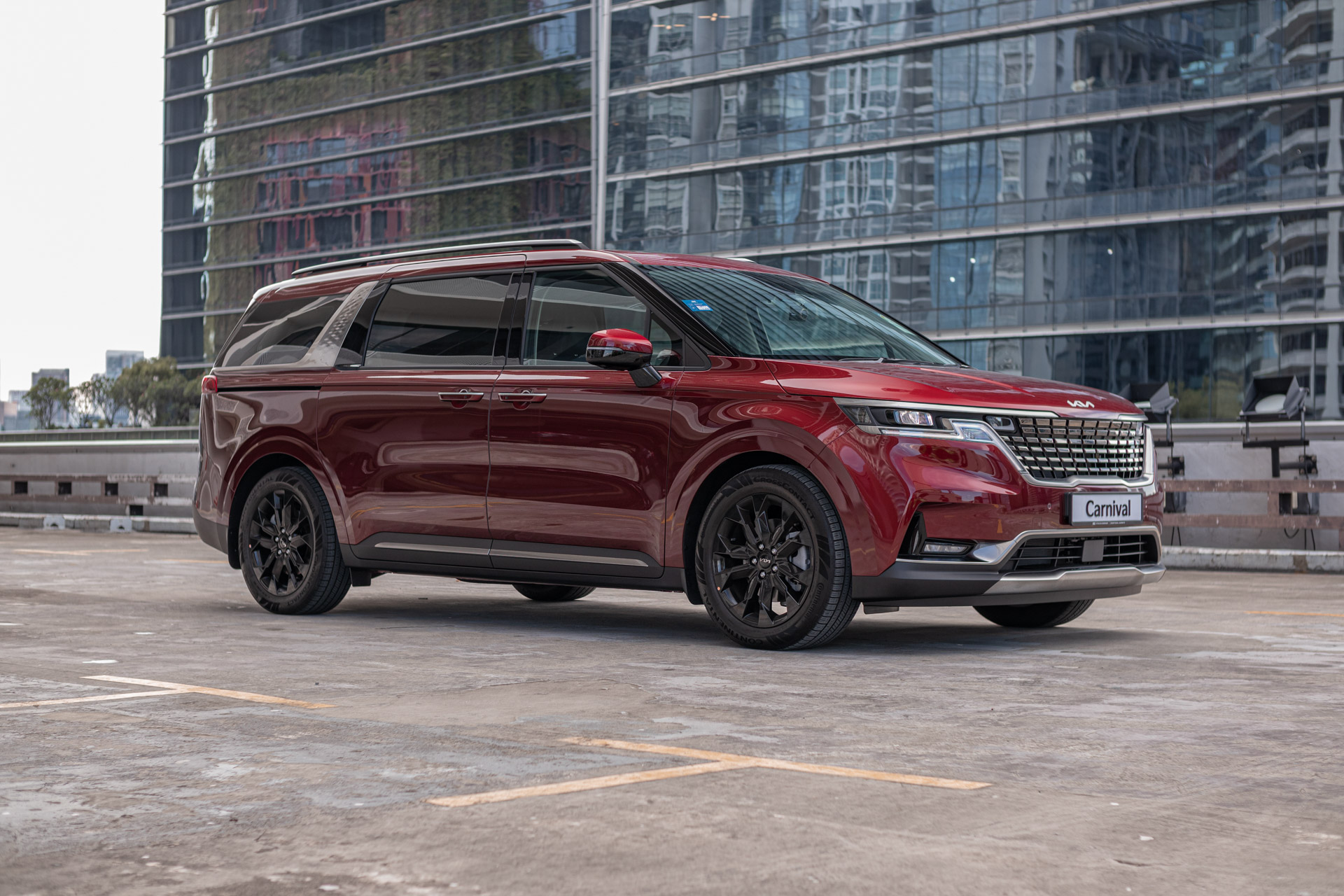 The first thing that strikes you is just how massive the Carnival is. Measuring at just over 5.1 metres in length and 1.99 metres side to side, it just about dwarfs most other cars on the roads here with ease. Even the luxurious Toyota Alphard, which is arguably one of the most largest minivans in its class, is smaller. In that regard, you truly feel like the king of the road.

The Carnival has a distinct design, combining the best elements of an MPV with those of an SUV. In this case, the power sliding door-equipped boxy silhouette is complemented by plastic cladding on the front and rear lips, as well as on the side skirts. To drive home this unique design language, it's fitted out with gloss black wheels, wrapped around in meaty 235/55/R19 Continental CrossContact tyres. 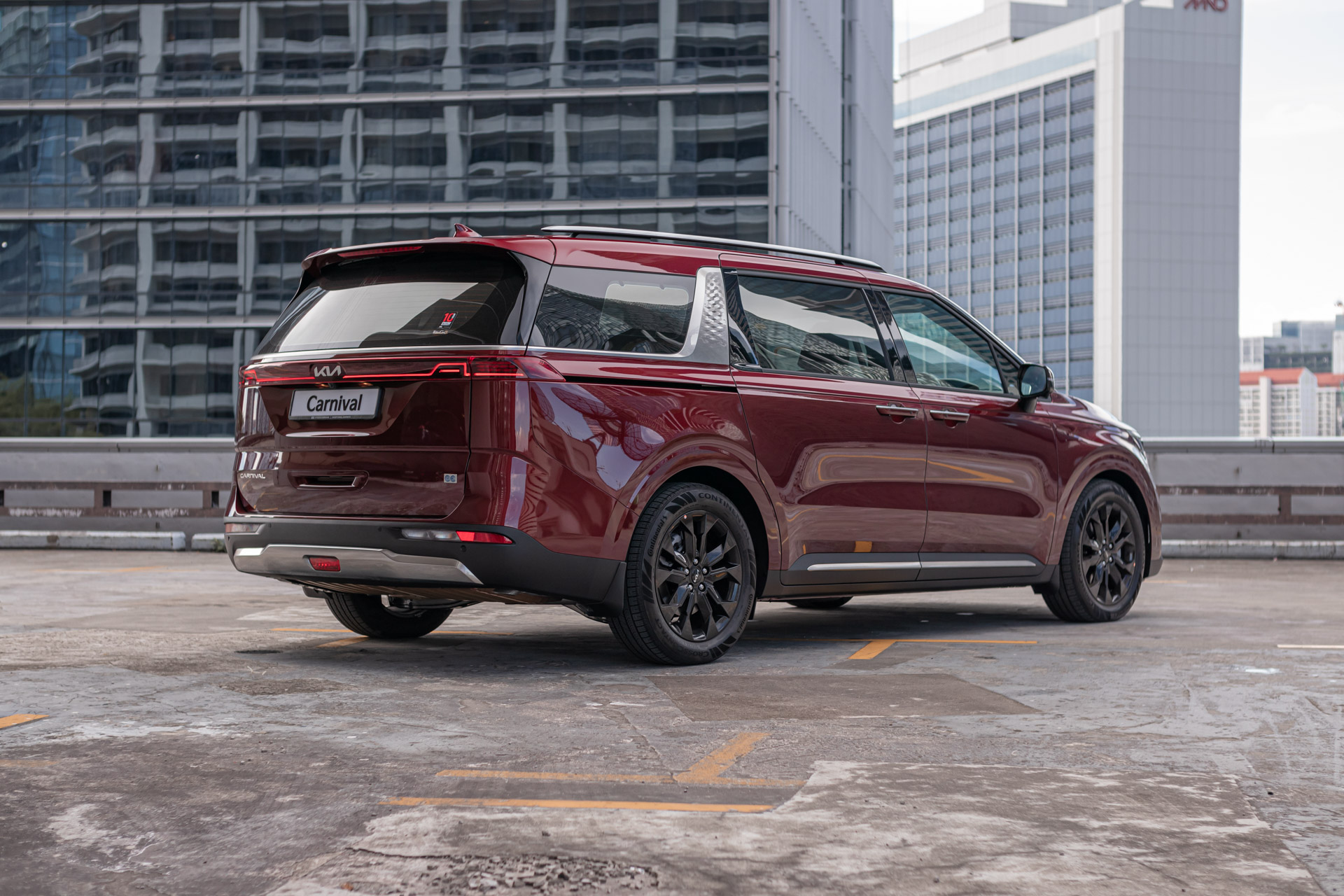 This "Grand Utility Vehicle", as Kia calls it, features futuristic elements as well, with LED headlights and taillights, and plenty of metal finish panels. The DRLs even feature a zig-zagging design that blends into the grille design.

We especially love the satin silver textured C-pillar panel, which adds plenty of character to the Carnival without looking tacky. This classy satin finish can also be found on other metal trim pieces found around the vehicle, and looks right at home with Kia's new corporate logo.

Over at the back, the rear wiper is tucked away discreetly under the spoiler, thus giving the Carnival a clean-cut look. Our model on test is finished in Kia's Flare Red paintwork, which looks fairly regal. Customers are given a grand total of eight colour options to choose from, all of which are well-suited for the Carnival.

Sitting in the Lap of Luxury 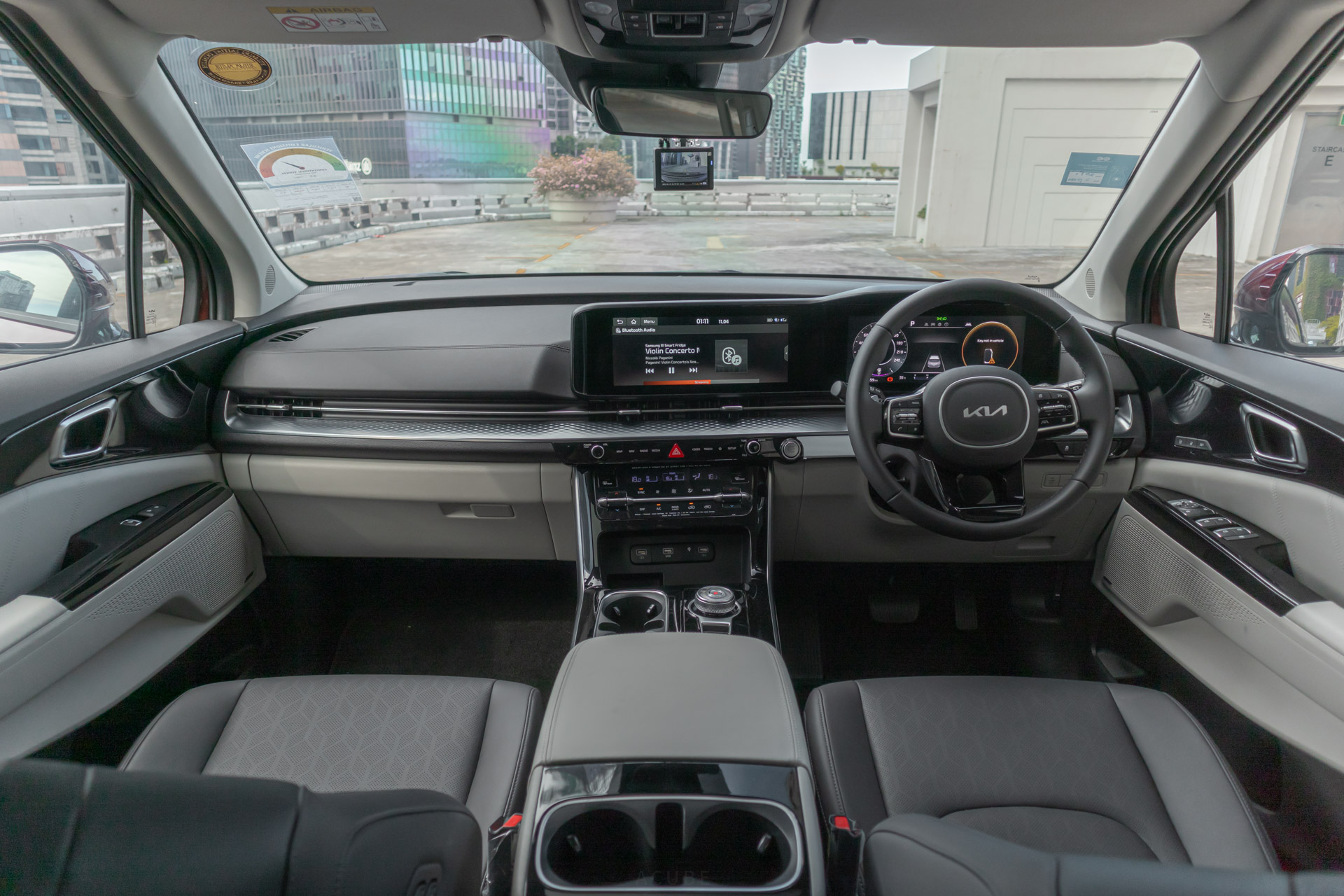 Things are just as swanky ━ and expansive ━ inside. Premium soft touch materials cover almost every square inch of the cabin, further solidifying Kia's status as a force to be reckoned with. The dashboard's main highlight is the satin chrome "Crash Pad Garnish" piece, which has 3D embossed diamond-like textures running from one end to the other. Not only does it look unique and futuristic, it also hides fingerprints well, making for a much cleaner interior!

The centre dash features a myriad of switchgear types - from physical dials to toggle switches to capacitive touch panels. We would've preferred for it to be less complicated, sticking to an all-physical format. In Kia's defence though, the control switches all worked flawlessly during our test period. 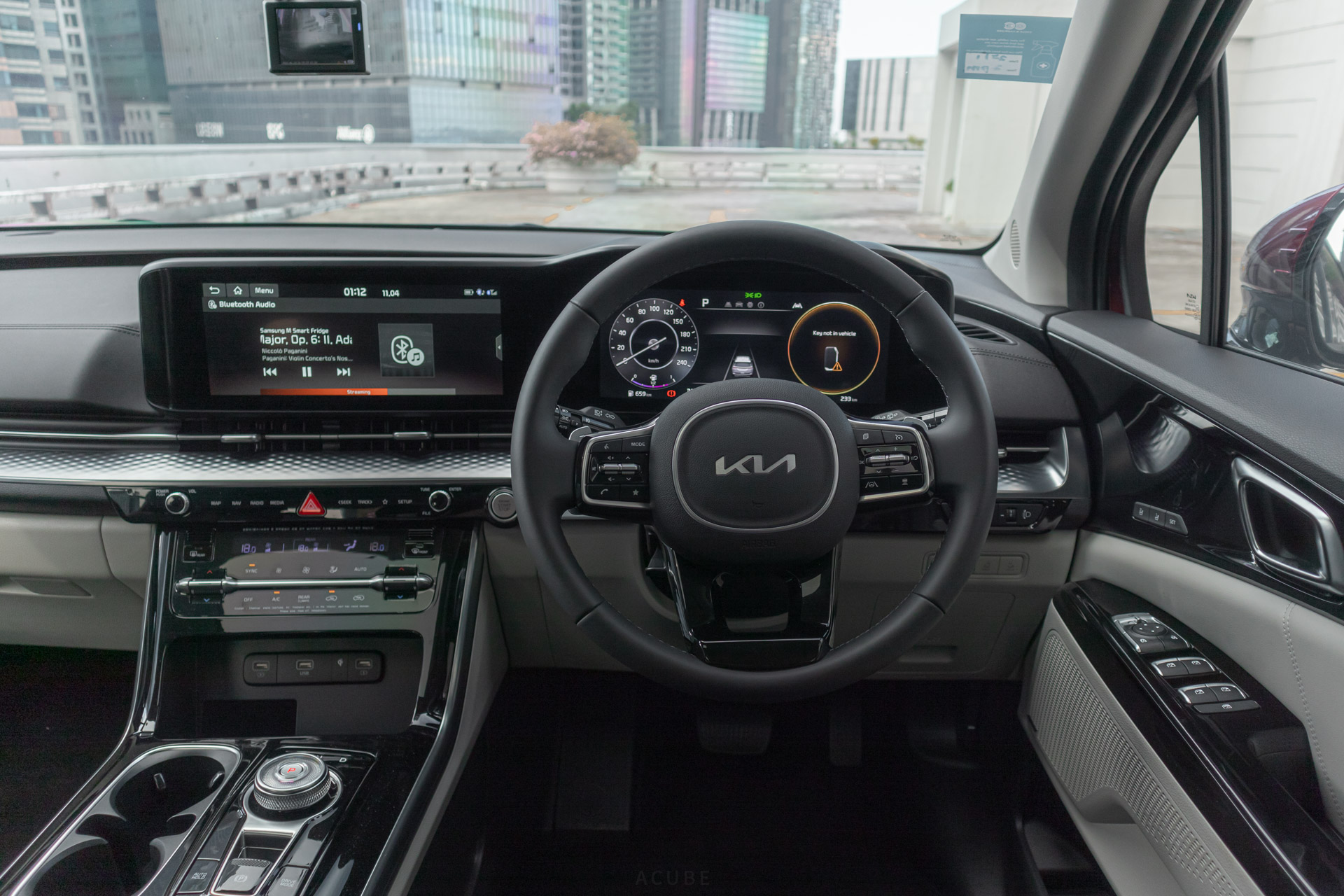 A 12.3-inch screen fills up the centre, allowing you to control all of your infotainment needs easily. It's slightly angled towards the driver as well, which is a nice touch. Certain settings and sub-menus can be accessed in a jiffy through the aforementioned capacitive panels. A second 12.3-inch display sits behind the steering wheel, showing critical vehicle information in high resolution.

Three USB-A ports are available up front, with a Qi wireless charging pad. There's also a pair of USB ports on the inner sides of the powered front seats ━ one for each side, with seat adjustment buttons next to them. The centre console box is adjustable and doubles as an armrest for the driver and front passenger, and is positively cavernous inside. 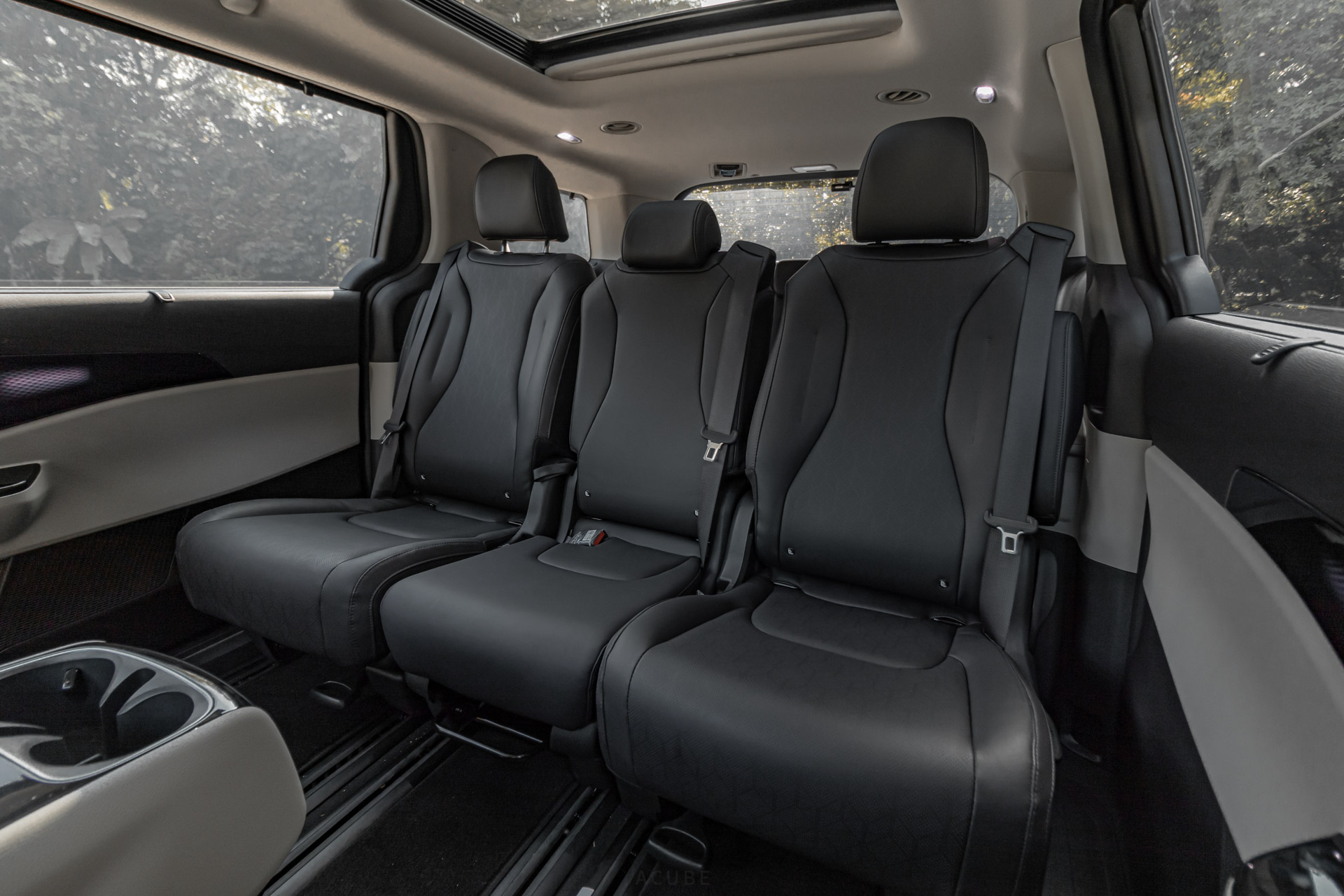 As expected from a luxurious family-carrier, soft and supple leather dominates the upholstery, and also features the same subtle diamond motif found on the rest of the car. The second row features three spacious seats, perfect for adult occupants. While you lose out on the exquisite lounge chairs found in the seven-seater, you stand to gain just as much!

They all slide front and back independently, making movement around the cabin a fuss-free experience. The pièce de résistance would be table mode, where the middle seat double ups as table for occupants, while the two seats on either sides can be turned 180 degrees to face the third row. In other words, the Carnival can easily convert itself into a limousine.

Right and left passengers on this row also have access to HVAC controls, which is especially useful for hot and humid climates such as ours. The door cards also feature hidden window blinds that can block out harsh sunlight if needed. As an added bonus, the left and right seats are also equipped with arm rests, a much-welcomed functionality for vehicles equipped with sliding doors. 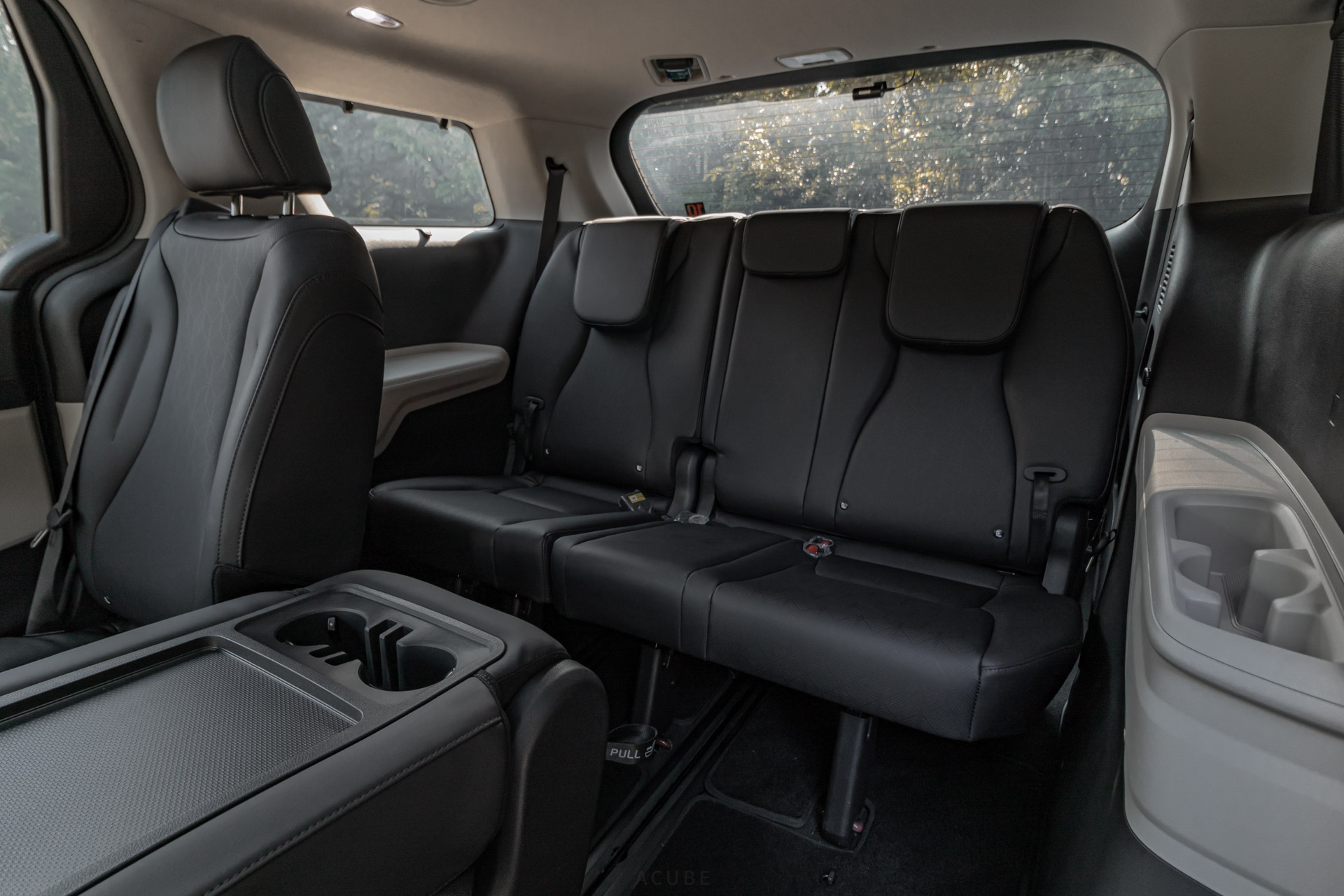 Third row occupants may not enjoy as much in terms of viewing the world outside, but legroom and headroom are remarkably good. At 1.75 metres tall, I found the last row to be more than adequate for long journeys. There are AC blowers as well for maximum comfort, as well as USB ports, cupholders, and window blinds. ISOFIX points are present on both second and third row seats, making this ideal for large families!

Boot space is also generous, at 627 litres. Should you require even more, the third row flattens itself into the floor with the pull of a lever. With only the front seats up, the Carnival can load up to 2,905 litres of cargo. 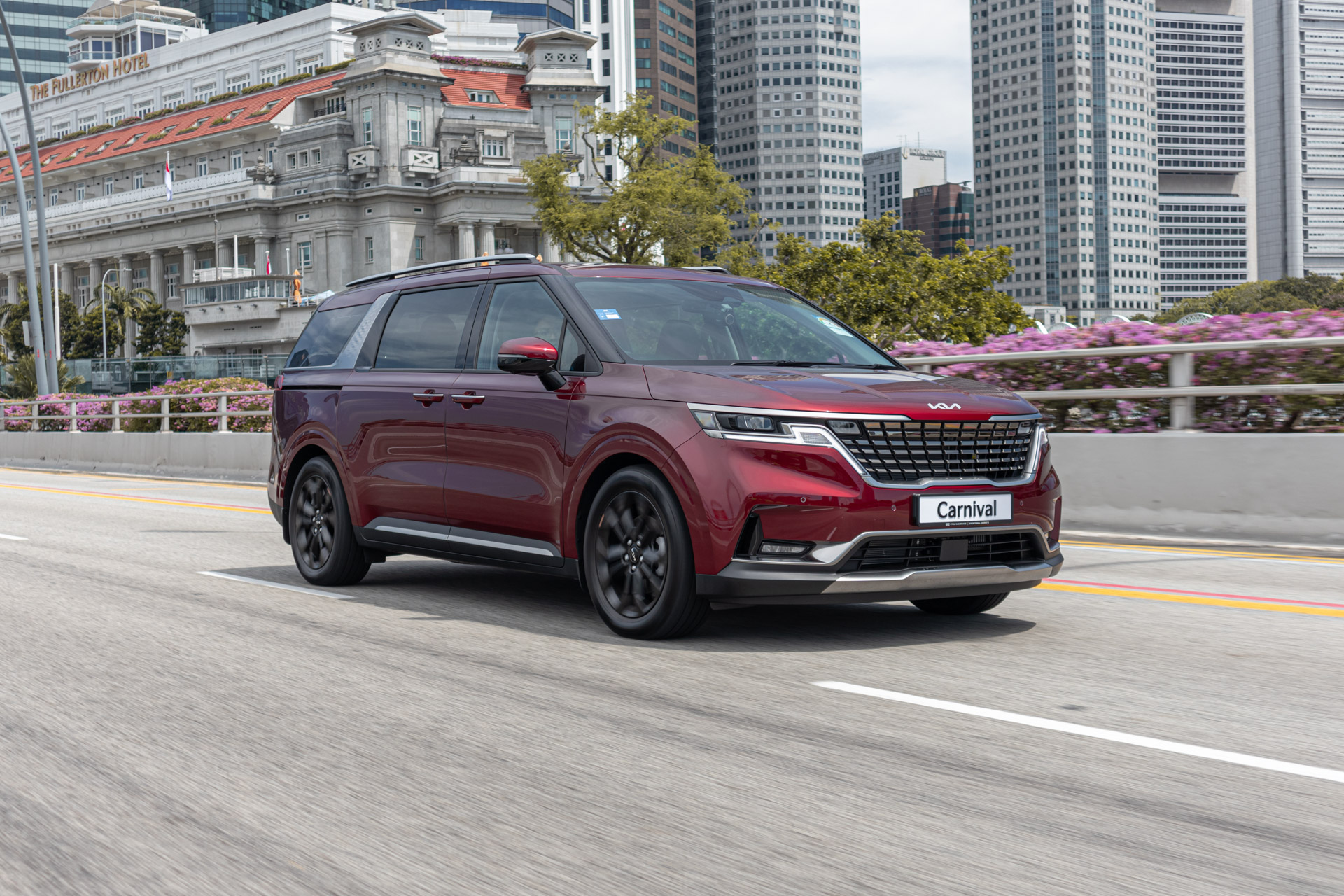 Despite its mammoth size, the Carnival is remarkably easy to drive. Steering weight is heavy enough to inspire confidence at high speeds, yet light enough to maneuver around tighter corners. In many situations, you easily forget that you're piloting a five metre-long vehicle.

Things do get hairy upon entering multistorey carparks, however. Due to its length and width, the Carnival gets awfully close to the walls and ceilings, and just about clears them with careful driving. Parking is also an issue, as most parking spaces are designed with much smaller cars in mind. As such, you'll oftentimes find your Carnival front/rear overhang jutting out from the lot by a fair bit. 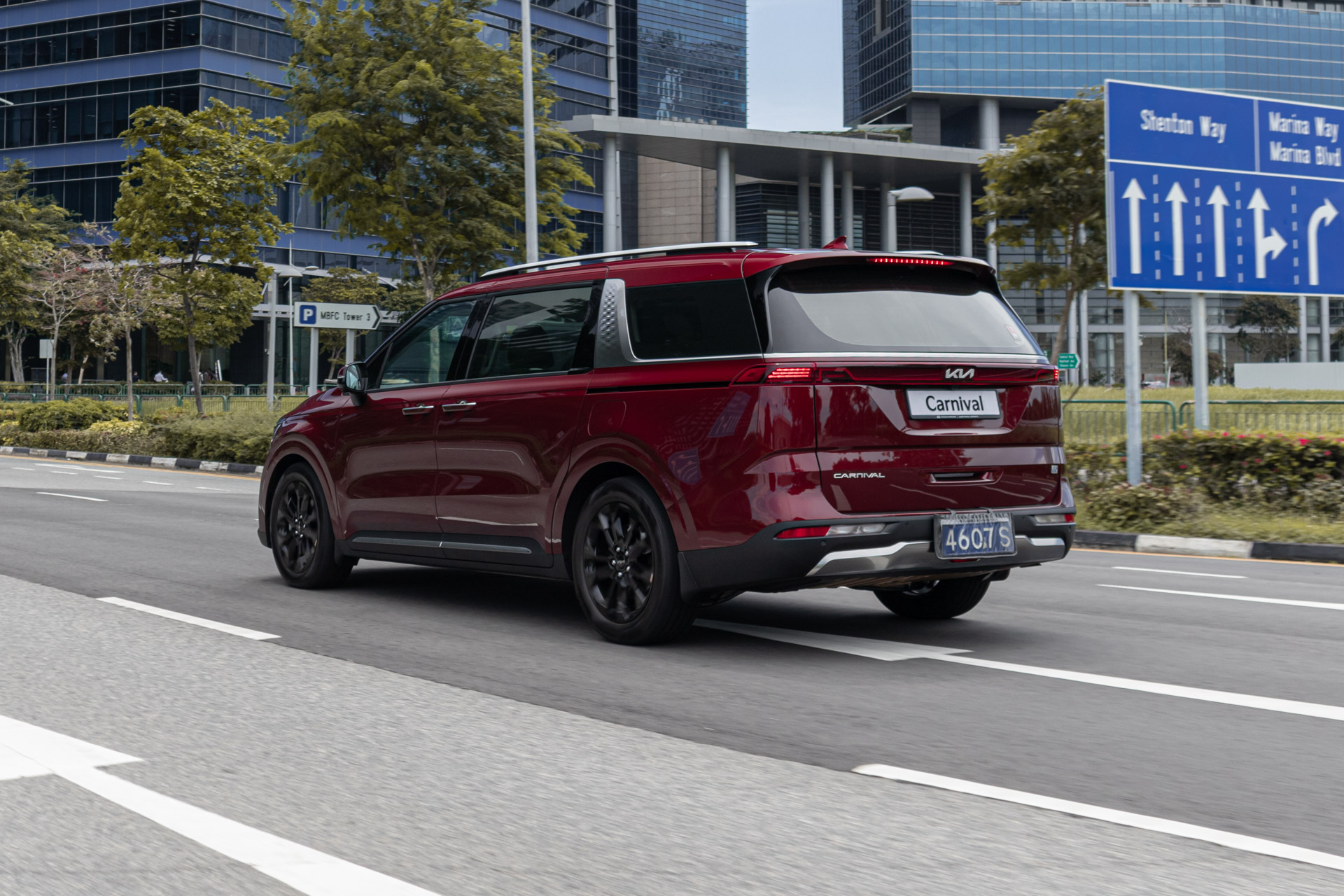 Once on the wide open road though, the Carnival begins to show its true potential. The 2.2-litre Smartstream Diesel engine is buttery smooth, providing you with 200 horsepower and a whopping 440 Nm of torque to glide you around town rapidly.

The low-end power delivery also means that when the pedal's to the metal, the Carnival launches eagerly from a standstill, making some interesting rubber-against-tarmac noises in the process.

As the four-cylinder powerplant runs on diesel, you can expect very good fuel economy. During our test, we managed to clock in about 14 km/l, which is a hair's length away from official manufacturer claims. 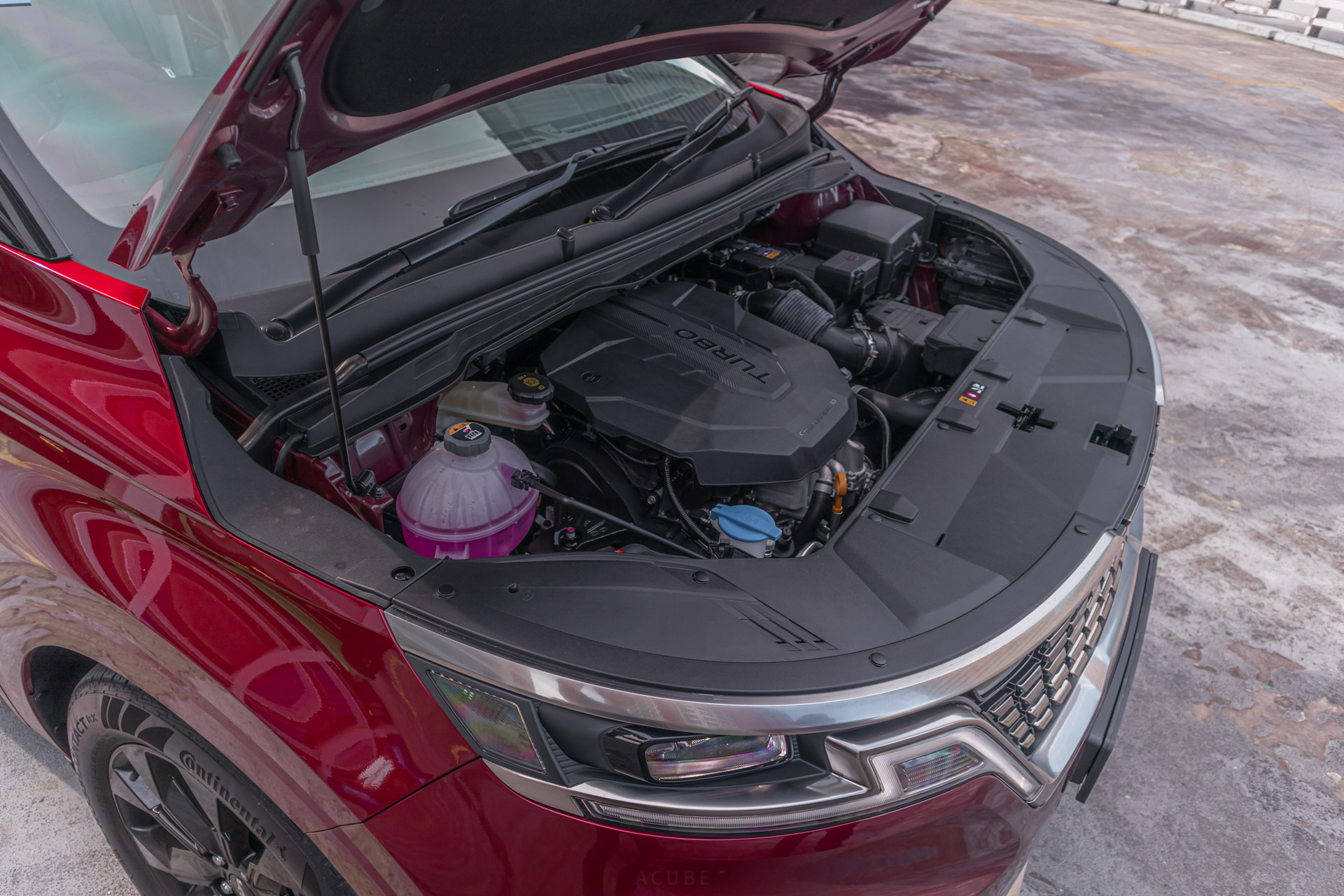 Suspension is also softly sprung, which means this Kia beast can soak up road bumps and potholes with ease. Don't expect it to corner like a champion, though. At 2,187 kg, the vehicle makes its kerb weight and dimensions known when you decide to throw it into tight bends at enthusiastic speeds. Drive it like a civilised person however, and you'll be rewarded with a supremely comfortable riding experience.

NVH levels are superb as well, providing almost-complete silence on the expressway. One impressive feature is the intelligent sound system. When the Carnival comes to a complete stop, the radio/music volume dials down a fair bit to compensate for the lack of road or wind noise. This in turn allows for all occupants to have a conversation without the music blaring in the background. Thoughtful design and engineering like this is what's needed more in the industry, and we're all for it!

Speaking of which, the Carnival is equipped with a Bose sound system that provides excellent sound quality throughout the cabin. Like most modern cars, you can choose to play your music via good ol' Bluetooth or by utilising Android Auto/Apple CarPlay, all of which can be accessed through the central touchscreen.

Safety-wise, the Carnival is equipped with seven airbags and a comprehensive suite of active safety features, such as Forward Collision-Avoidance Assist (FCA) and Smart Cruise Control (SCC). When the turn signal is engaged, the digital gauge cluster will also show what the blindspot cameras are seeing, which is especially useful for a car of this size. 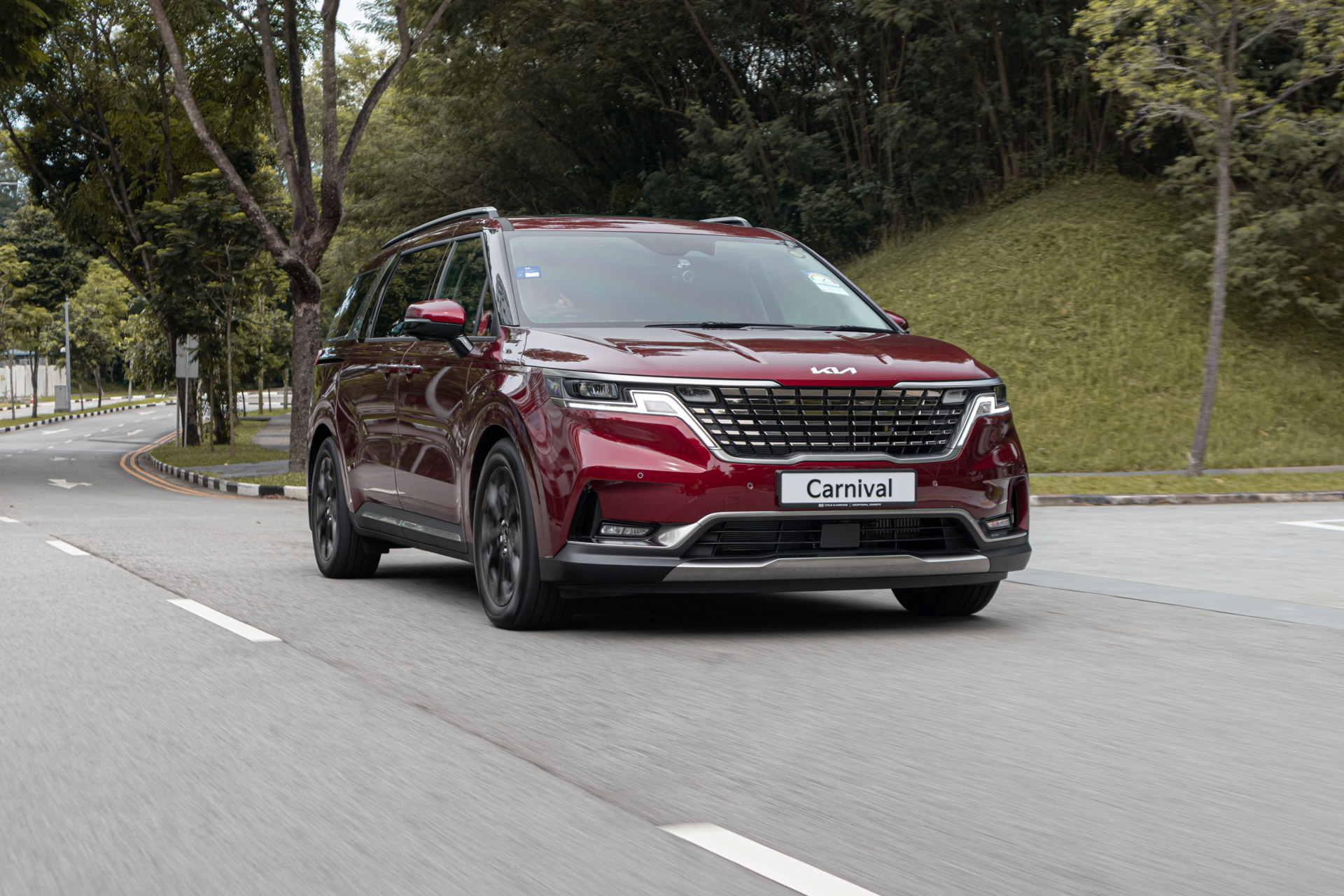 The Carnival is a genuinely exceptional vehicle, through and through. With its impressive specifications list and value-added features, this premium Kia satisfies the needs of its target audience, and then some. And while you no longer have fancy lounge seats a la Osim chair with this eight-seater variant, Kia has given it loads of added practicality and modularity for you and your loved ones.

Priced at S$248,999, it outperforms even the best from Nagoya while remaining more affordable; a feat rarely seen in the industry. With the likes of the Carnival being pumped out in recent times, we are excited to see what the future holds for this ambitious South Korean carmaker.