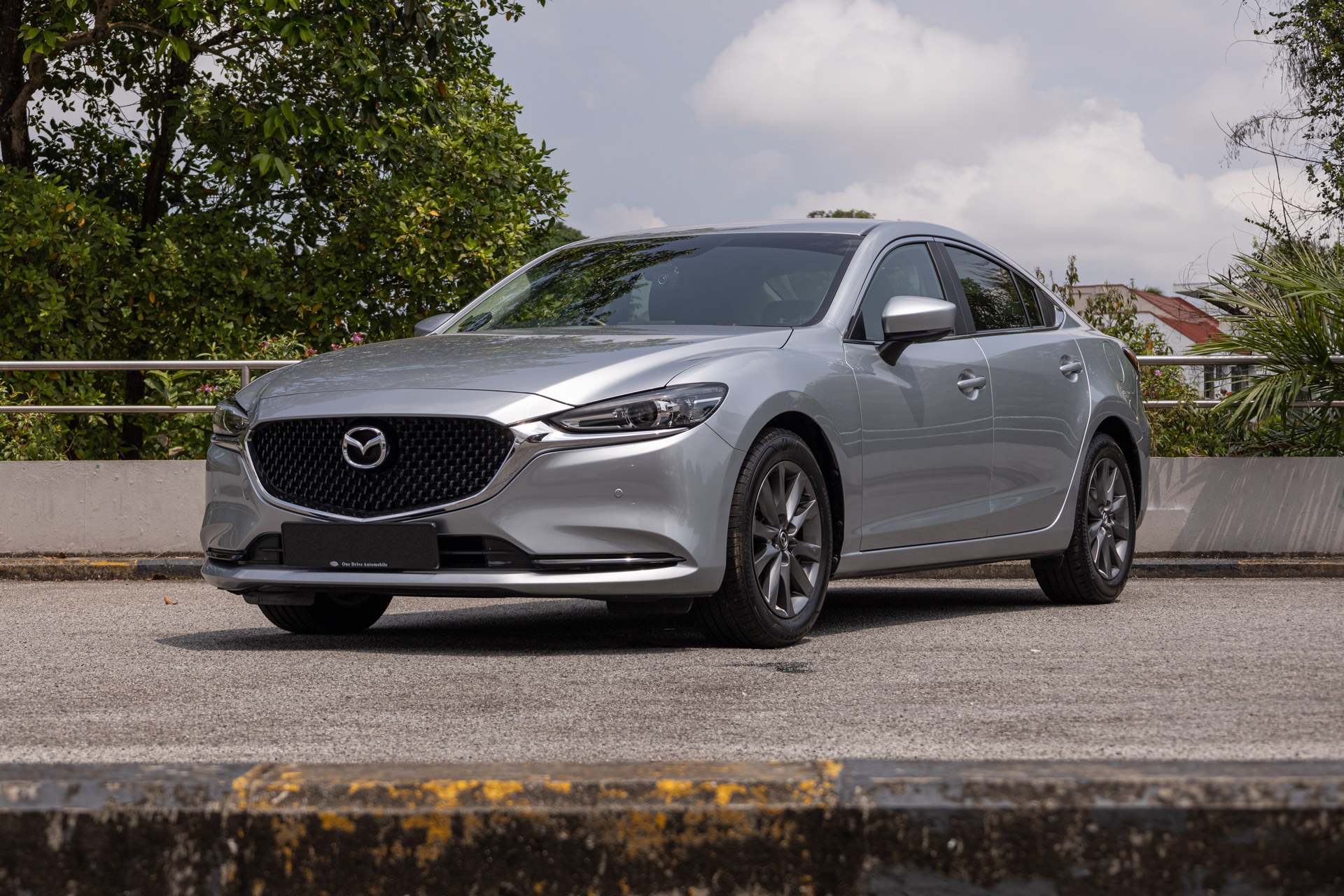 Ever recognisable as Mazda’s flagship, it has gone from strength to strength over the years. With the latest facelift, Mazda has further applied the essence of their Kodo Design philosophy, resulting in the most striking Mazda 6 to date.

First launched in 2002, it has been a popular choice among local buyers, going head-to-head with other midsize sedans like the Toyota Camry, Honda Accord, and the Nissan Cefiro/Teana.

The Mazda 6 has always been the most stylish one out of the aforementioned models, and that has been a constant throughout its various generations. It has only been in recent years where its rivals have designed their own models to look more edgy and aggressive, which in my opinion is emulating how the Mazda 6 has always been designed, and there is no flattery more sincere than imitation, or in this case following the example set by Mazda.

A quick side note; this Mazda 6 is currently listed for sale at One Drive Automobile, so do approach them if you are interested! 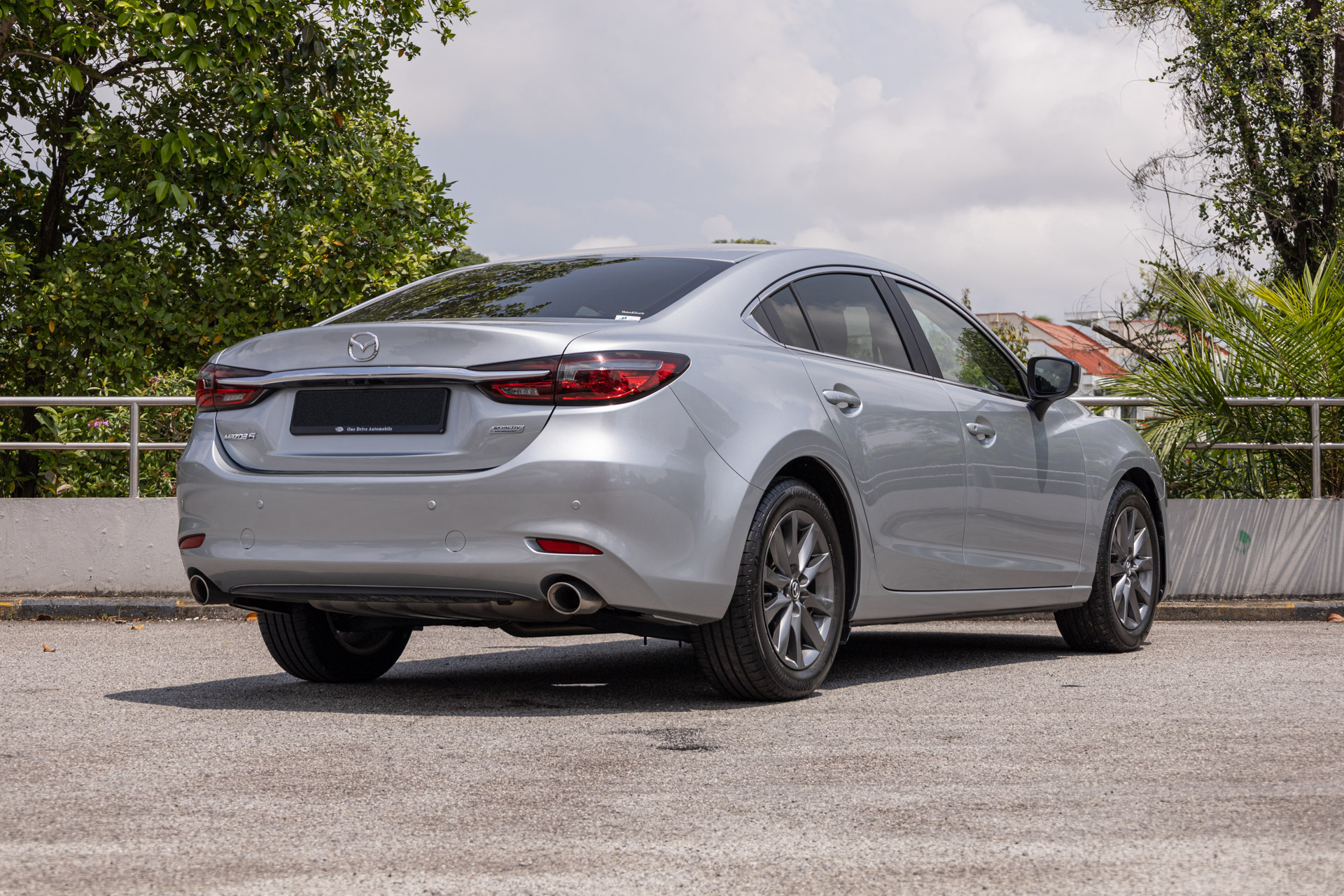 This is the third generation Mazda 6, specifically the second facelift model, with the facelift taking effect for the 2018 model year. This model comes with a 2.0-litre engine, and is in the “Standard” trim level. Two trim levels for the Mazda 6 2.0 are available in Singapore, “Standard” and “Executive”.

The standard trim specification lacks some of the niceties that are found on the executive trim specification, like an 11-speaker Bose system and LED daytime running lights (standard trim cars get a six-speaker system and halogen daytime running lights), to name a few. While the 2.5-litre engine was also initially available for the facelifted Mazda 6, it seems to have been phased out by the authorised dealer, and is now only available with the wagon, not the sedan.

This is a little unfortunate, as the third generation has used the same SkyActiv-G engine throughout its model life, and the 2.0-litre engine, while smooth, does feel lacking in power and urgency, which is made more apparent by the heavier weight of the Mazda 6 (as compared to the lighter Mazda 3, where the 2.0-litre engine is also fitted). Granted, the 2.5-litre engine does produce more power (194hp and 258Nm of torque), but it also commands high road tax and raises the car’s price, so it’s not a surprise the authorised dealer chose to phase it out possibly due to lesser demand. 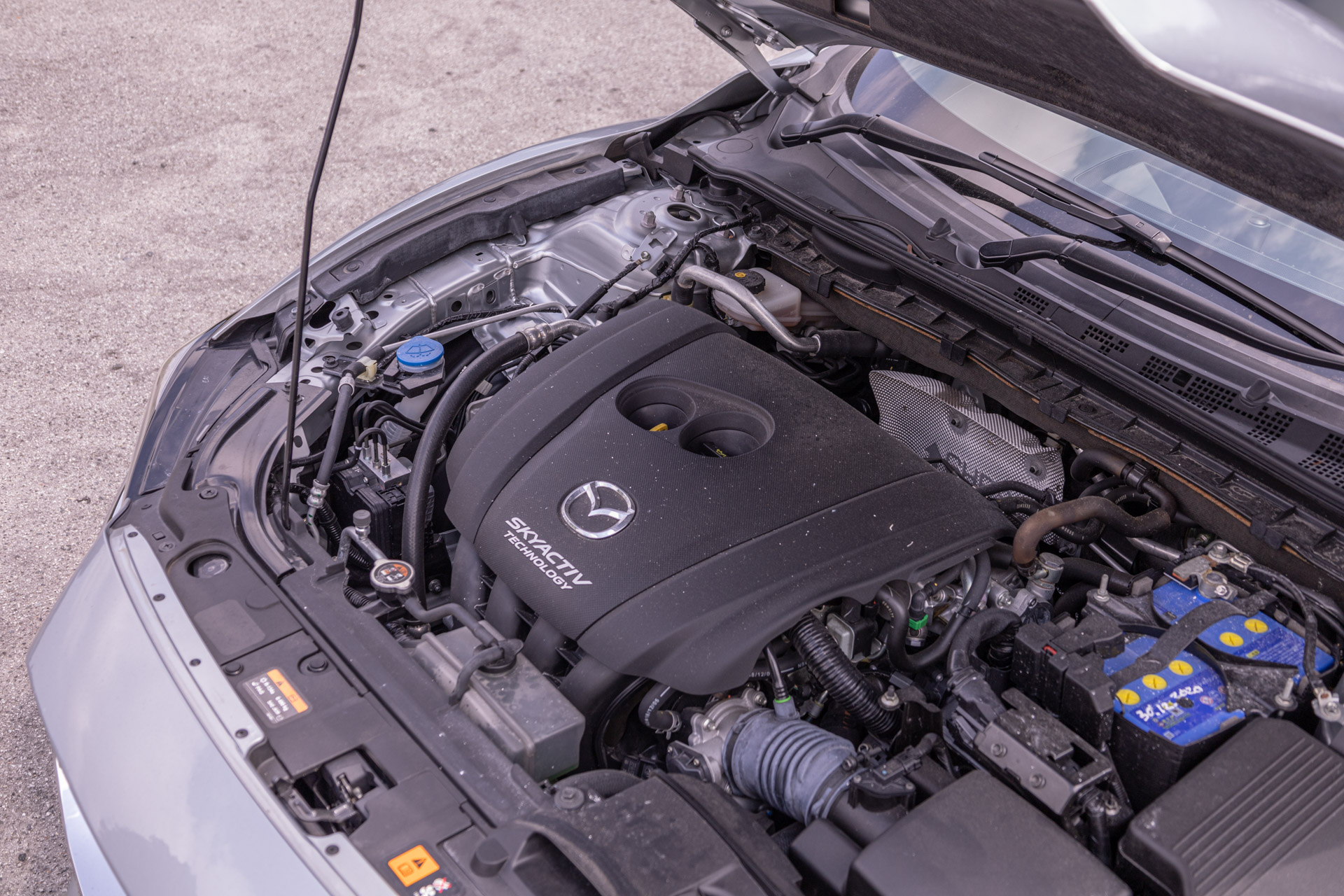 Like the Mazda 3, the Mazda 6’s 2.0-litre engine also has high compression, which in this case is 13:1, which gives the engine great response upon throttle application. The engine produces 165hp and 213Nm of torque, not impressive numbers by any means, but is sufficient for Singapore traffic. Power is sent to the front wheels via a six-speed torque converter automatic transmission, which shifts smoothly and also has a manual override. 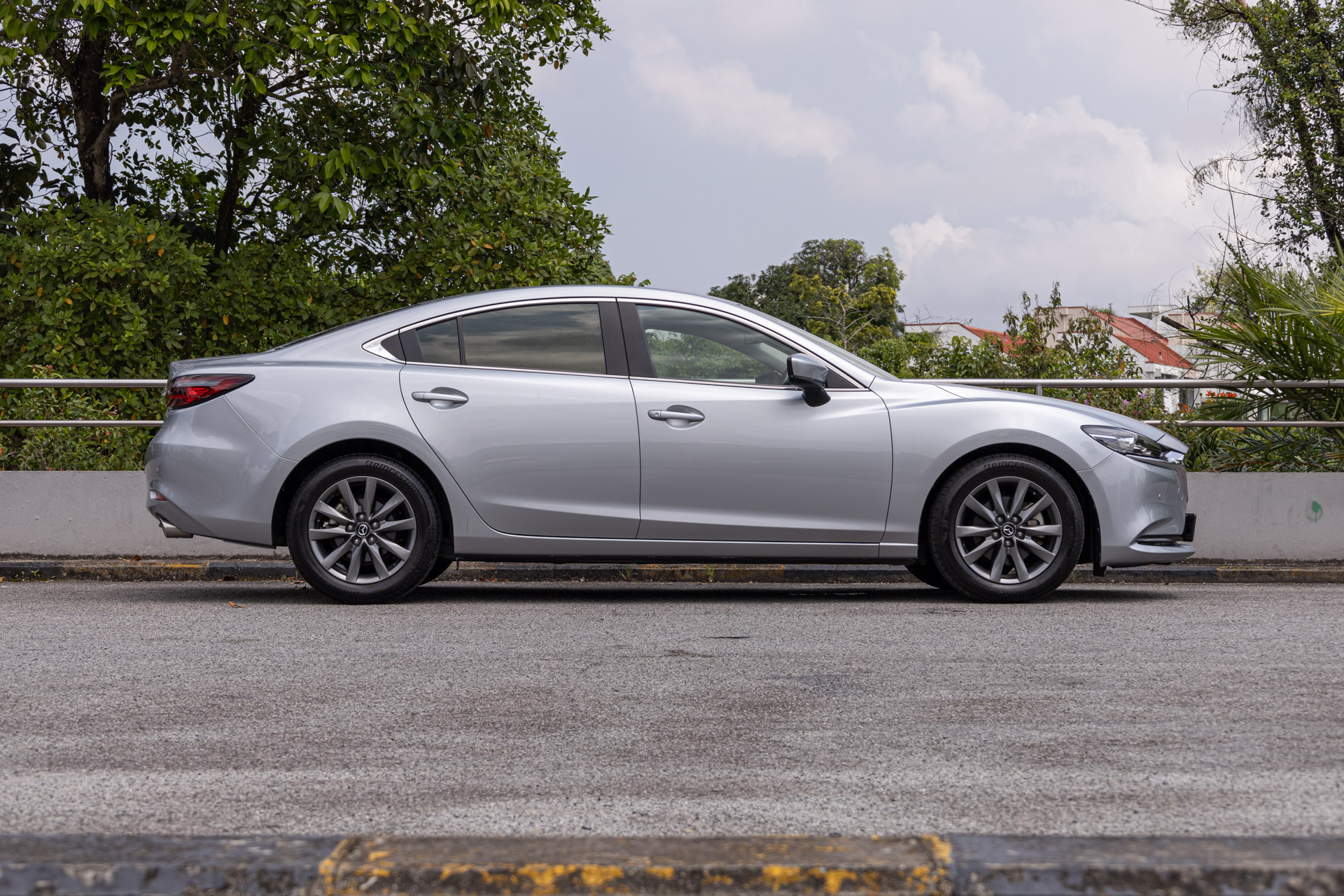 Like the Mazda 3, the Mazda 6 has demonstrated a strong record of reliability, with little to no mechanical issues or failures reported by its owners. Given the number of units that are in private hands, this is testament to Mazda’s engineering prowess and the confidence consumers have with Mazda. With proper maintenance, meaning a service every six months or 10,000km, the Mazda 6 should run like a Japanese car should, which is reliable and problem free.

Fuel economy is decent enough, at 10 to 12km/litre of petrol. The fuel tank has 62 litres of capacity, so an average of 700km per tank should be doable as long as you don’t drive with the aspirations of a Super Taikyu driver.

Still, there are a couple of known issues, albeit minor ones, with the Mazda 6. Firstly, the wing mirrors. Newer Mazda models from 2013 and up will automatically fold in their mirrors when the car is locked. Unfortunately, the Mazda 6 has an issue of the wing mirrors not being able to fold or unfold itself after the car has gone through a car wash, heavy rain or after being parked in the hot sun for a period of time. While the exact problem isn’t able to be pinpointed, a quick and easy fix would be to spray WD-40 or lubricant at the joint between the mirror housing and mirror stalk, which would allow the mirrors to operate normally again. 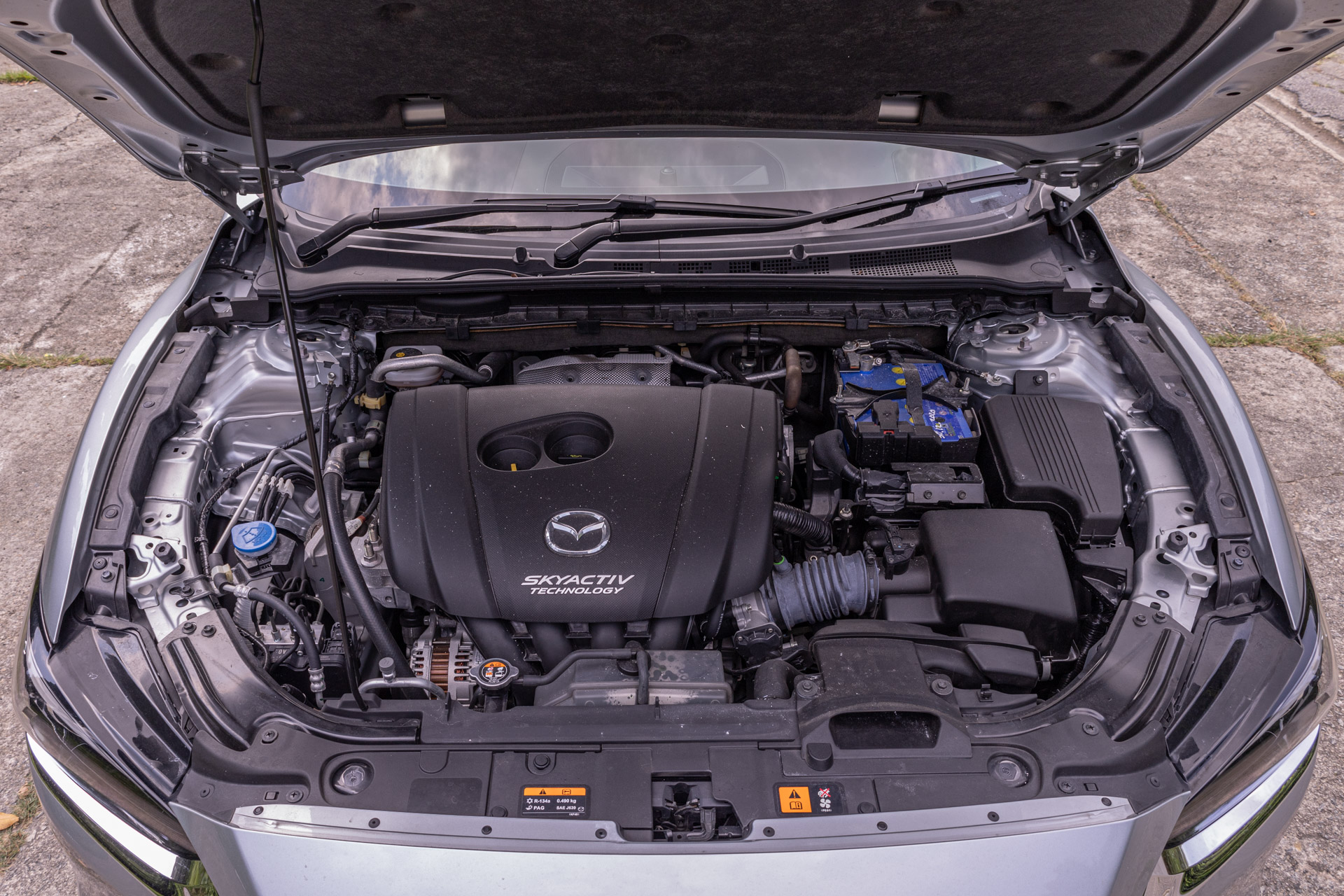 The Mazda 6 uses a capacitor system, called i-ELOOP, to store kinetic energy that would otherwise be lost when decelerating or braking, and converts it into electrical energy that can power the headlights, climate control, audio system and other electrical equipment.

This capacitor system has been used since the launch of the third generation, and with the earliest units turning five to six years old, issues with the capacitors have surfaced, with the warning signs being flickering headlights, or a warning light suddenly appearing on the instrument cluster when accelerating past 3,000 - 4,000 RPM. With the latest facelift units turning four years old in 2022, problems with the capacitor could surface in the next year or so. Unfortunately, this problem only appears after the warranty ends, and with the only solution being a complete replacement of the capacitor, owners will have to pay out of pocket for a fix.

The battery on the Mazda 6 has also been noted to require more frequent replacement as compared to other cars, with owners reporting battery changes every one to one and half years. Research on what exactly causes this short interval between battery changes to be inconclusive, although some owners have reported that not activating the start-stop system has shown to help in prolonging battery life to some extent.

But yes, other than these issues, the Mazda 6 is mechanically reliable and should provide a typical problem-free Japanese car ownership experience. Just ensure that you send any secondhand car for a thorough pre-purchase inspection before you buy it. 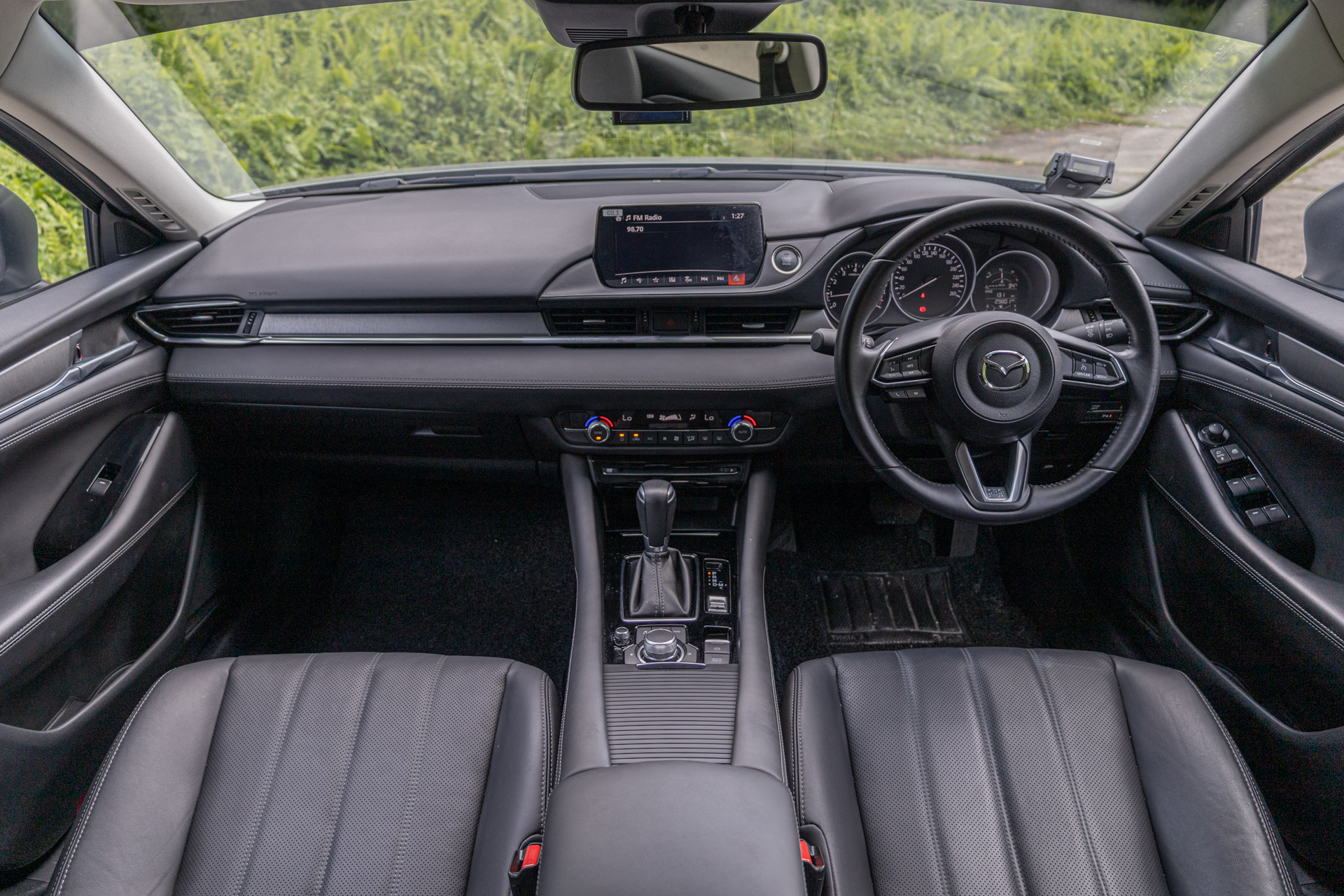 Yes, it is. The Mazda 6 has always been a very comfortable car to be in, either as a driver or a passenger. With its length, interior space has always been generous, and three people can actually fit in the rear seat without feeling too cramped, although it is best that there are only four people in the car for maximum comfort.

Furthermore, since the 2018 facelift, Mazda has increased the refinement, comfort and build quality of the Mazda 6, with the interior design and materials being easily able to rival or perhaps even surpass the quality of its European rivals. Sound insulation and ride quality have both been improved over the pre-facelift unit, with a quieter cabin while moving and more compliant suspension when going over less-than-perfect asphalt.

The gauge cluster is mostly analogue, together with a digital display screen to display various information like the trip counter, fuel range, and odometer.

The interior is mostly black synthetic leather, soft touch surfaces and soft touch plastics, particularly the high-touch points like the gear shifter, arm rest, window sill and dashboard. While it is drab to have a completely black interior, it compliments the exterior colour of this unit, which is a darker silver. Both front seats are electrically adjustable, and come with lumbar support. Headroom at the rear is also enough for a 1.8m tall person to fit comfortably. 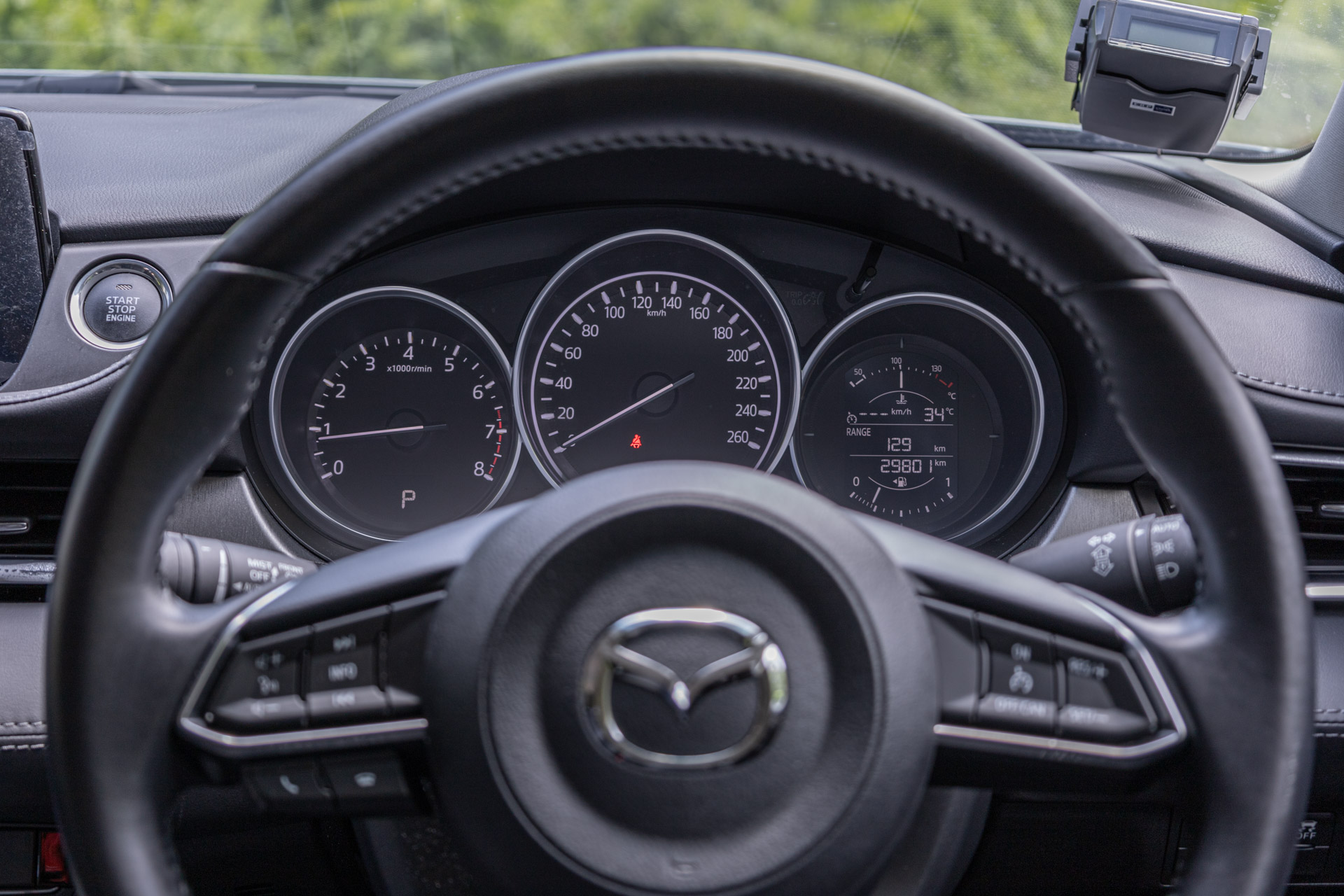 The infotainment system is the older Mazda system, with an eight-inch display that is controlled by a rotary dial in the centre console  together with hard buttons for easy access to functions like the phone or radio. The system is simple and intuitive to use, and comes with Android Auto and Apple CarPlay, which have to be connected via cable.

Bucking the trend of many manufacturers nowadays that use touch-sensitive controls for the HVAC system, physical controls with buttons and knobs are still retained in the Mazda 6, which makes for easy adjustment for the climate control even when driving. Being a Japanese car, the air-conditioning blows beautifully cold, with dual zone climate control being available too. There are also air-conditioning vents at the back for rear passenger comfort.

The steering column has tilt and telescopic adjustment, together with a multi-function steering wheel with controls for both the infotainment, phone and cruise control. The rear seats can be folded down in a 60/40 split, with the levers to lower them located in the boot. The ISOFIX points are also easily accessible and are hidden under plastic covers. 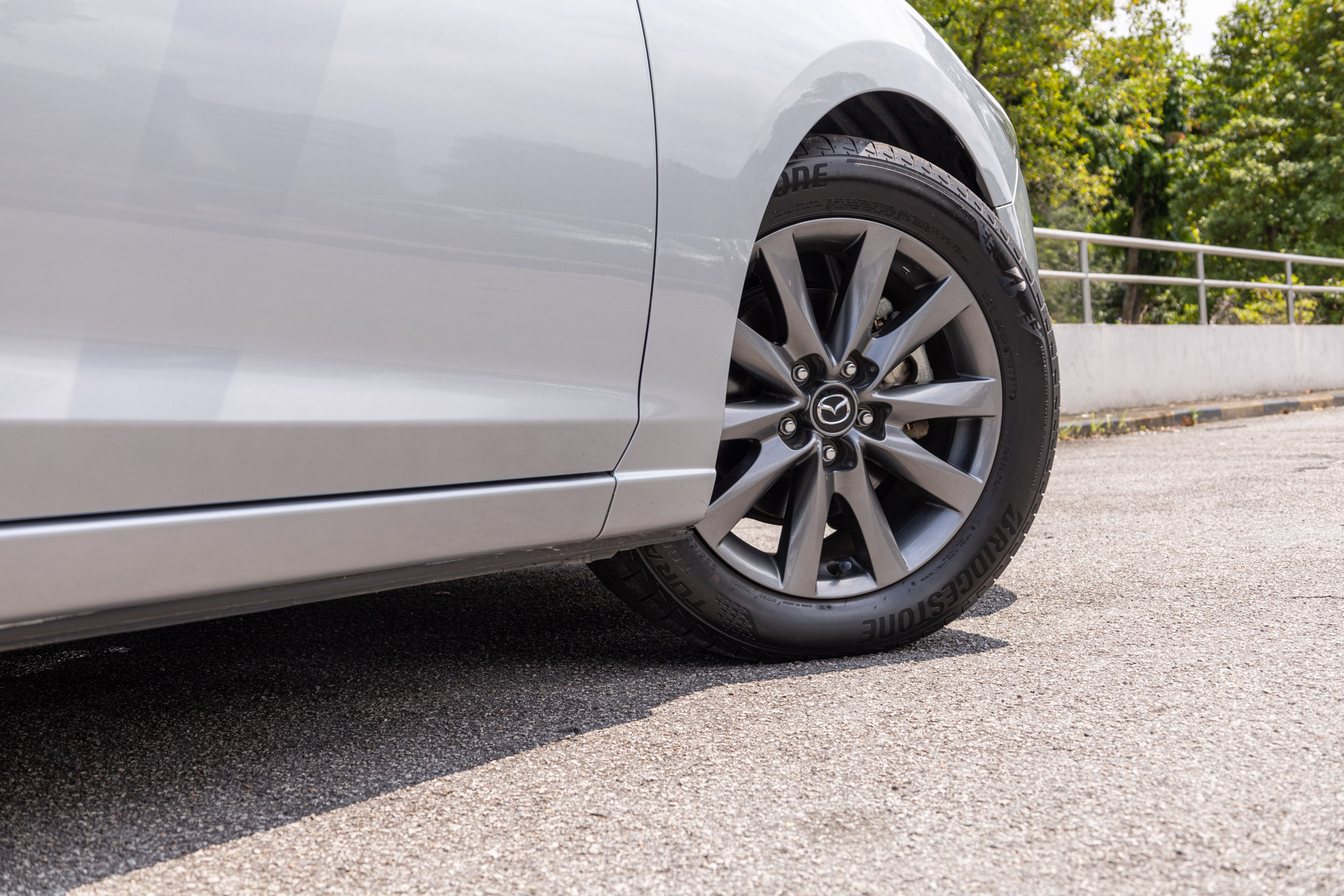 The Mazda 6 comes factory fitted with Bridgestone Turanza T005A tyres in the size of 215/45/R18. They are not a sporty tyre by any means, but more of a grand touring tyre which prioritises a comfortable and quiet ride. Combined with the sound insulation and compliant suspension, the Mazda 6 is a great car to be in for long journeys. 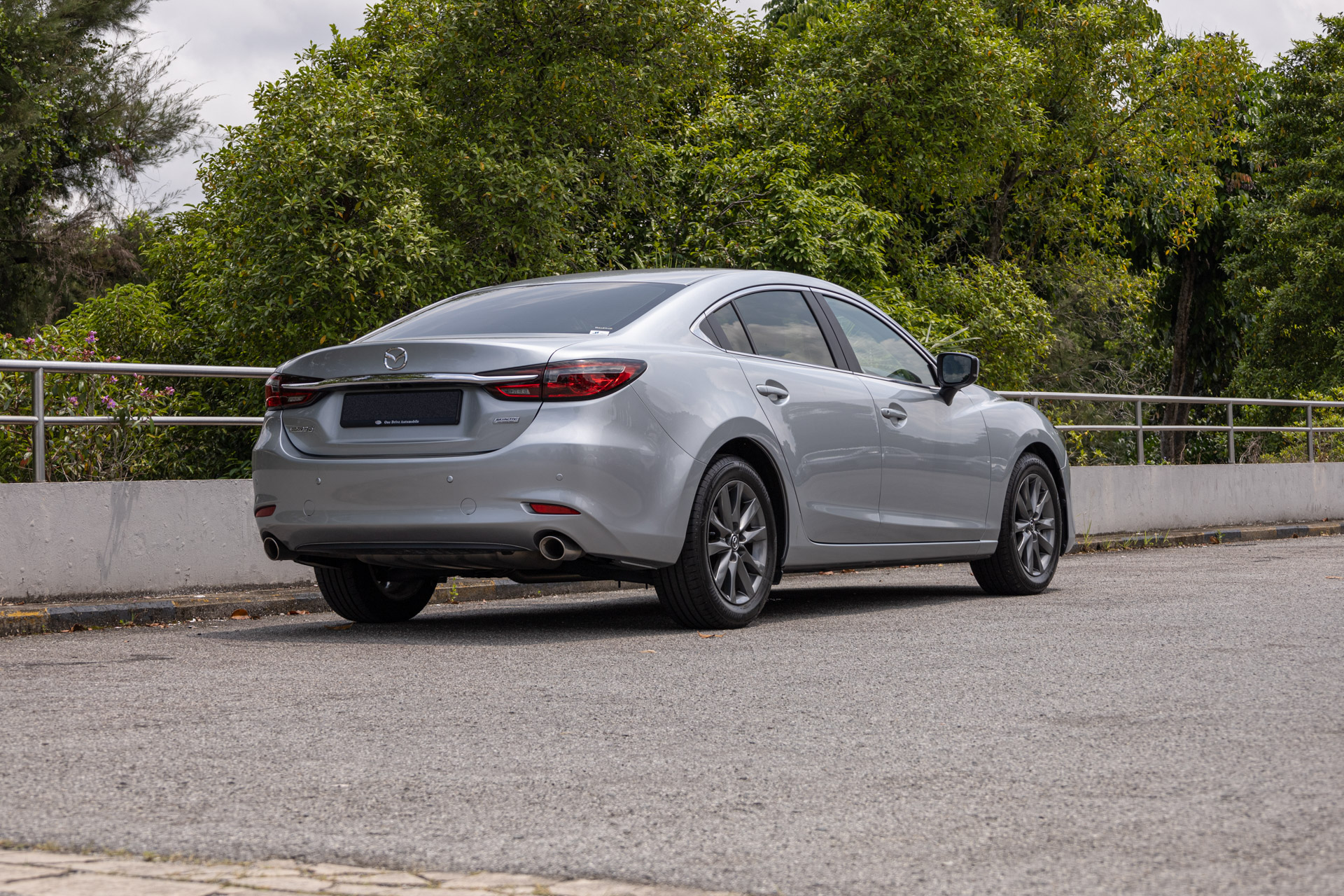 And yes, there is a spare tyre. Plus tools you would need to change a tyre by the side of the road. 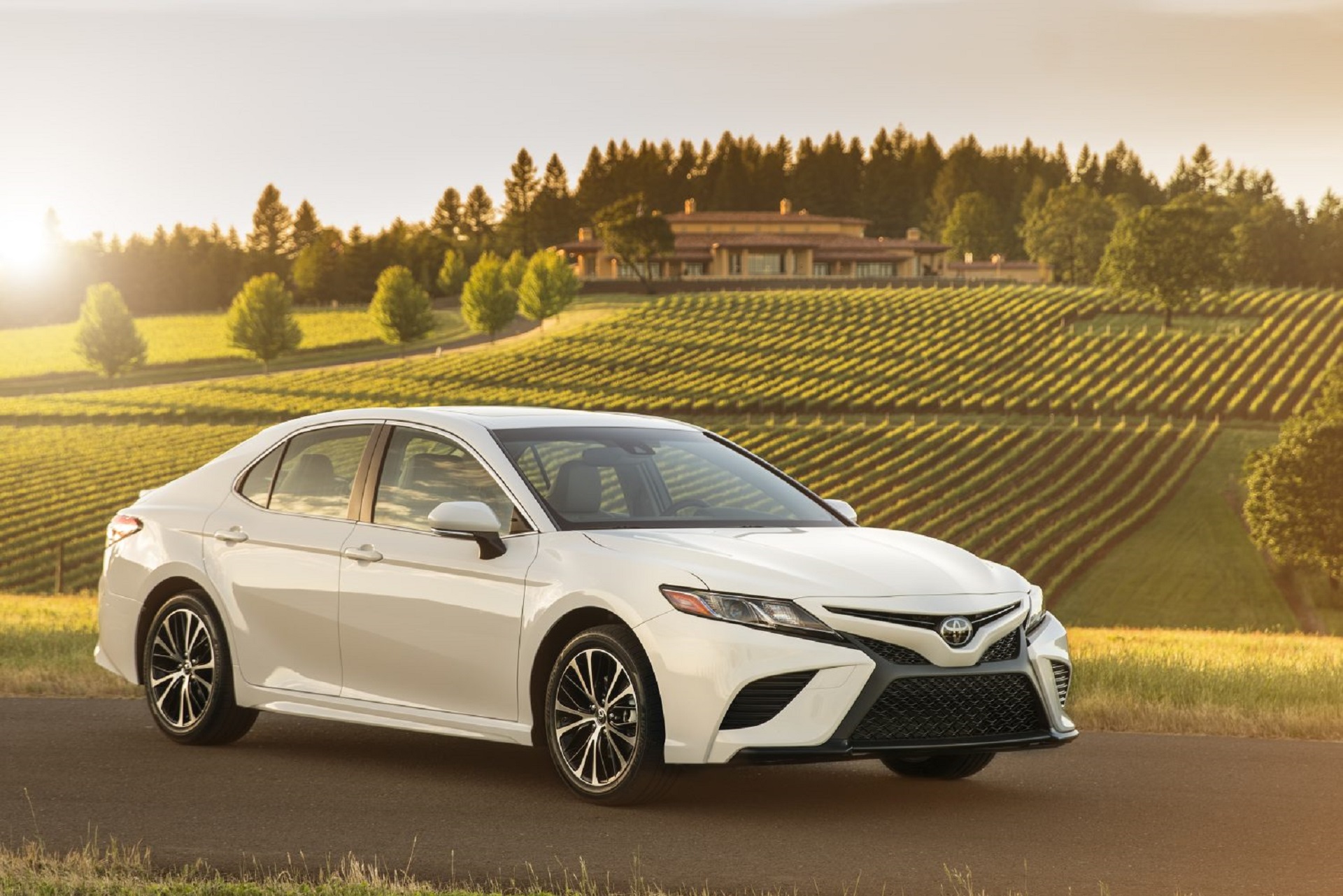 If you want something Japanese, the two remaining Japanese mid-sized sedans (in the similar price bracket), the Toyota Camry and Honda Accord, would be the most logical choice for competitors. 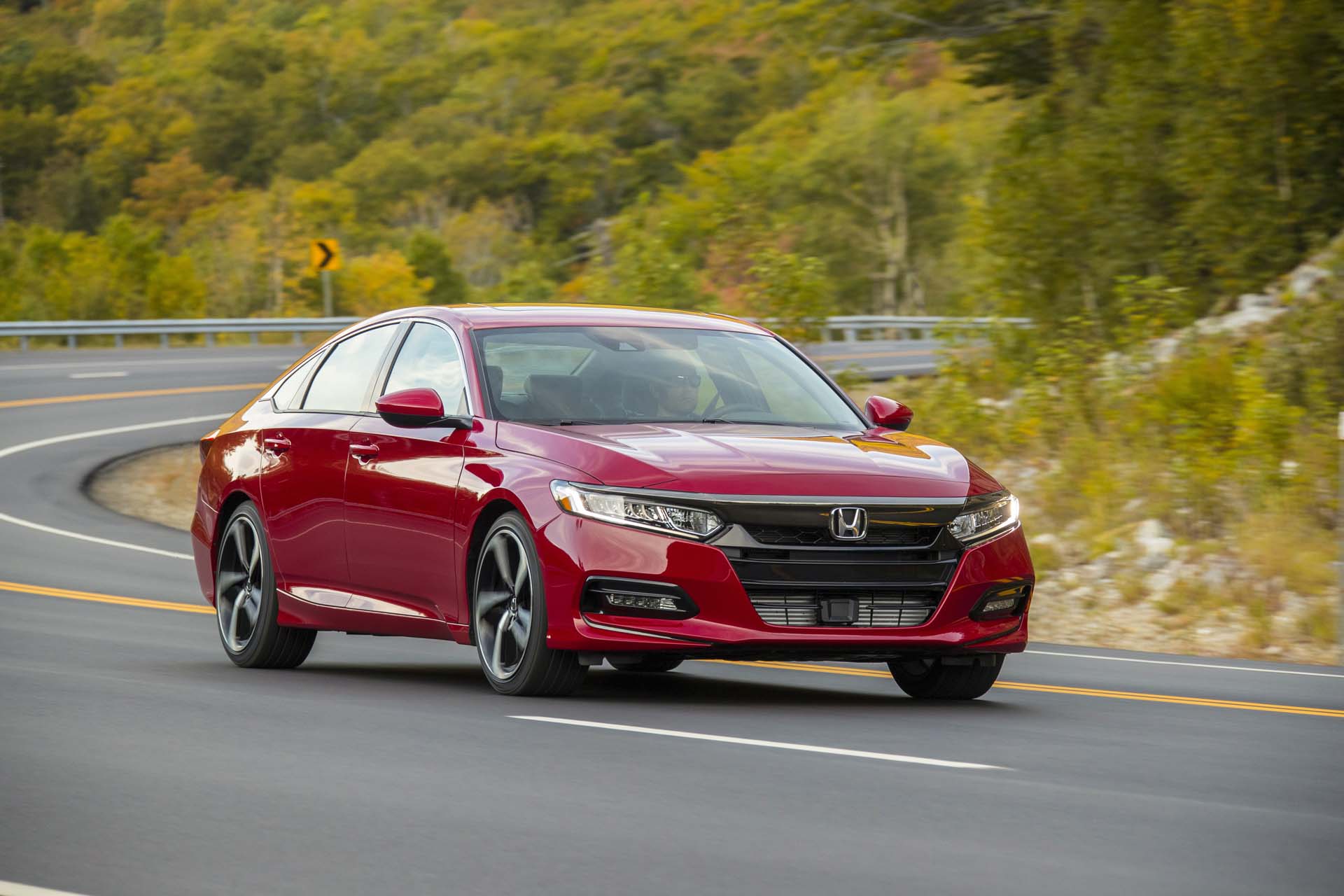 You can’t go wrong with Japanese reliability, plus parts are usually plentiful and every other mechanic knows how to work on them. 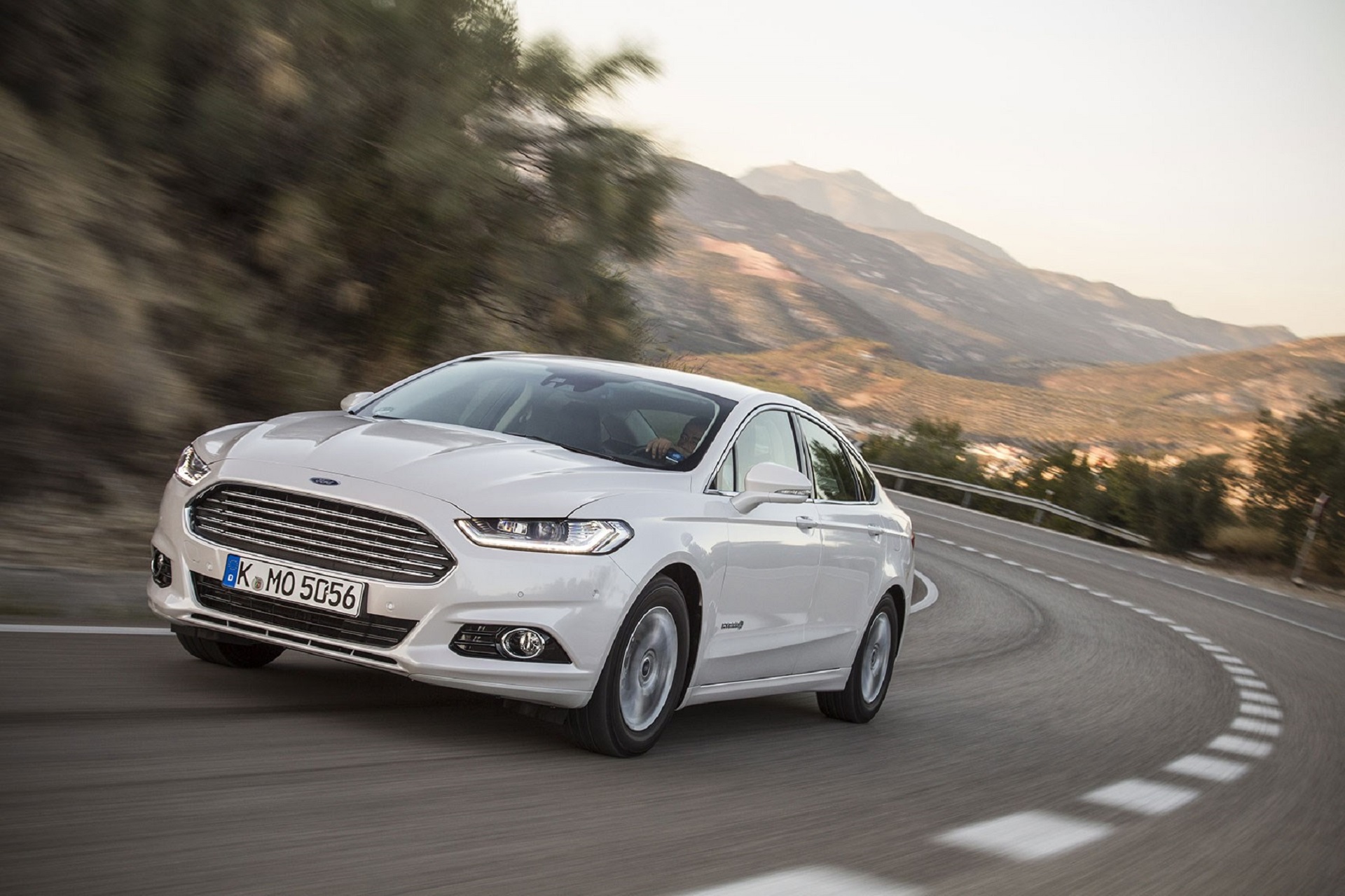 But what if you want something different, something continental? How about the Ford Mondeo? With its pseudo-Aston Martin looks, it might not be as filled with technology as the Mazda 6, but what it lacks in fancy features, it makes up in power, with a turbocharged 2.0-litre engine producing 240 horsepower. That’s almost 80 more horsepower than the Mazda 6, which would make for much more spirited drives, especially up north.

No matter which way you look at it, you can’t really go wrong with the Mazda 6. Looks, presence, reliability and decent fuel economy, there is not much else you can ask for from a car in the price segment.

And should you want more space in the boot, there is also the Mazda 6 Wagon, which has a pretty cavernous boot and roof rails for you to transport items on the roof if required. 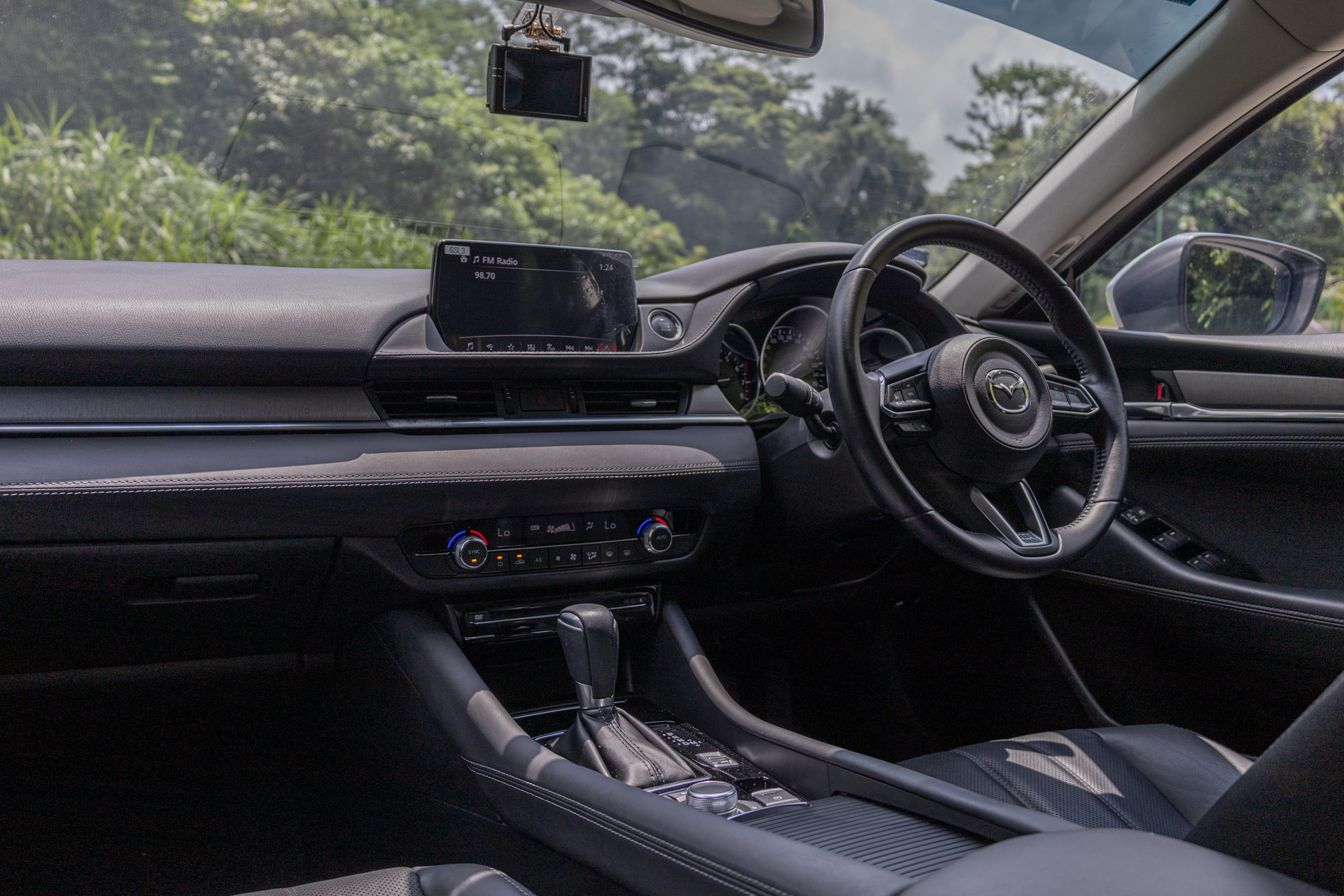 From a purely aesthetic point of view, the Mazda 6 is the most grown up and handsome looking as compared to its Japanese counterparts, with the Honda Accord looking a little too tame, while Toyota’s new aggressive styling cues might not float everyone’s boat. The Mazda 6 strikes the sweet spot between style and restraint, all while looking extremely mature and the sort of car you want to be seen in.

If you are keen on getting a Mazda 6 as your next car, or any other used car for that matter, do take a look at our used car selection here for some of the best deals!

Motorist would like to extend our thanks to One Drive Automobile for loaning us the Mazda 6 for this article.