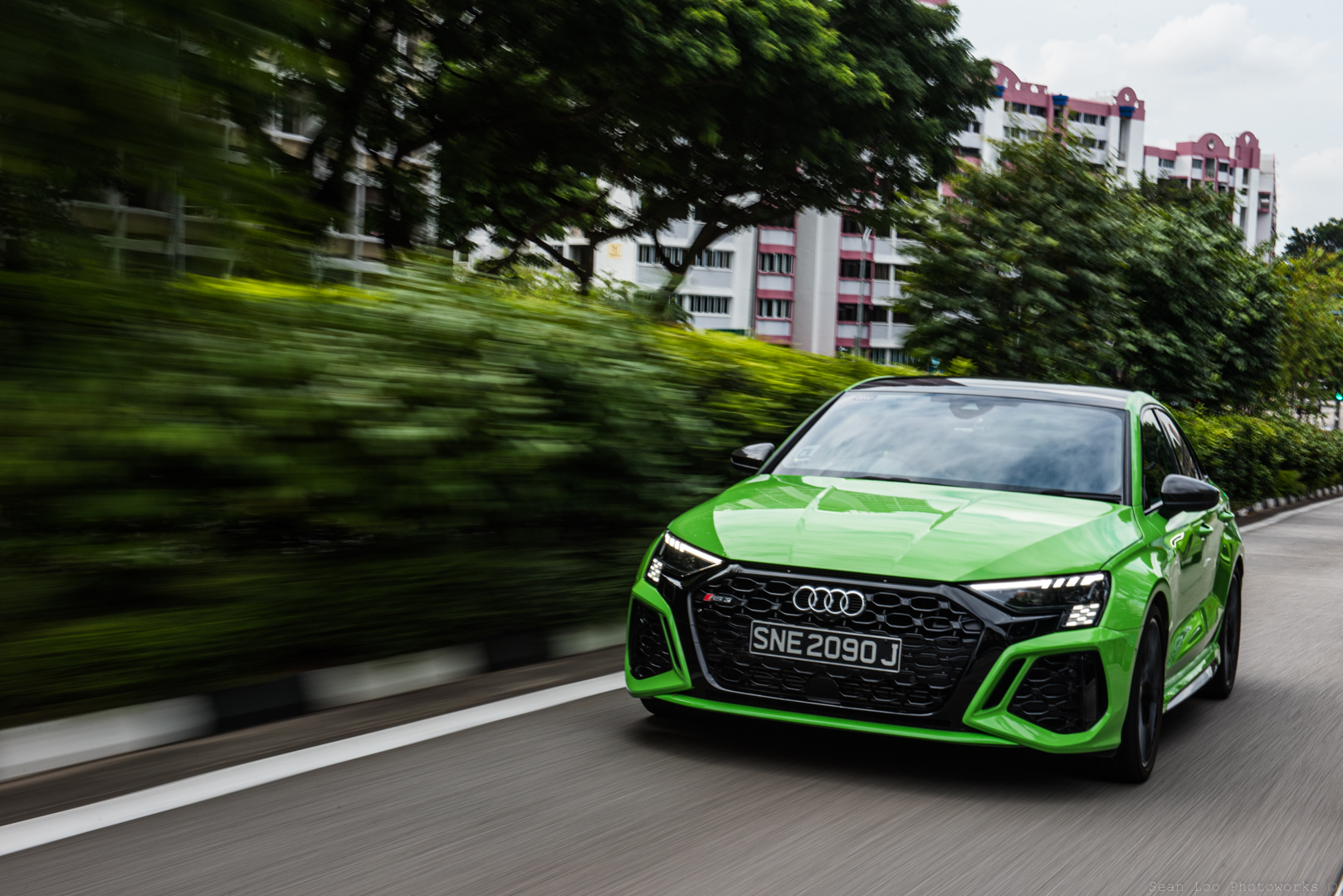 For car aficionados, Audi’s RS line represents the apex of the automaker’s engineering and motorsports capabilities. Absurdly high performance figures, extreme designs, and state-of-the-art technologies are just par for the course for these vehicles.

And with the rise of the latest RS 3, Audi is determined to show everyone that even with electric vehicles quickly becoming mainstream, the internal combustion engine (ICE) party is far from over.

We featured the balls-to-the-wall insane RS 3 Sportback here on Motorist not too long ago, and while it is nearly identical to this Sedan, we believe that they are characteristically different enough to warrant separate reviews.

So What's Different, Then? 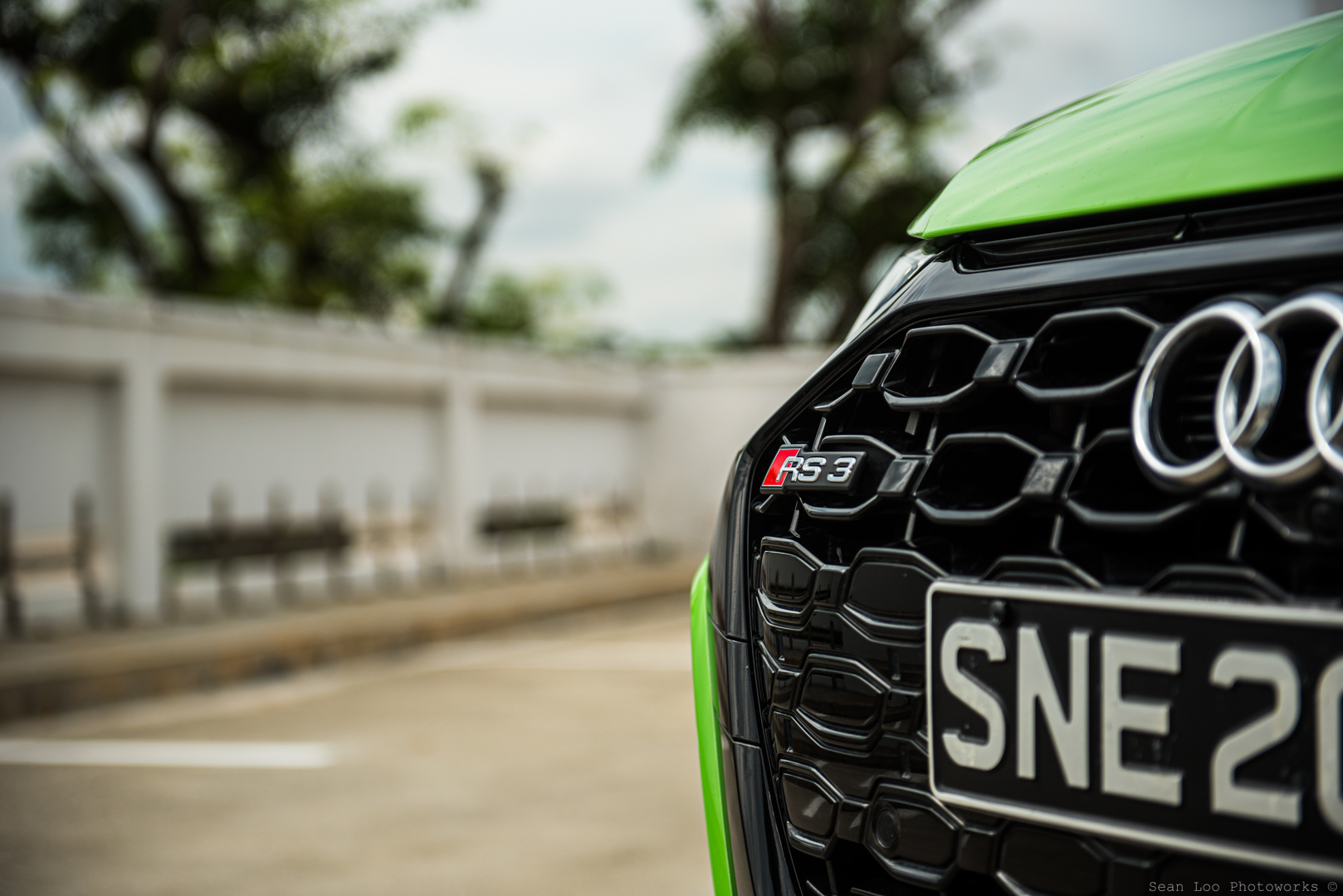 Well, it is a saloon car, so it's a touch longer – by 153 mm – than its hatchback sibling to accommodate a boot. It's also 24 mm lower, due to the lack of roof rails. The RS 3 Sedan is also heavier, though by merely five kilos despite the extra sheet metal.

Apart from that, the wheelbase is identical at 2,631 mm. and has pretty much the same cabin space as the Sportback.

Crafted By Boffins, Loved By Yobbos 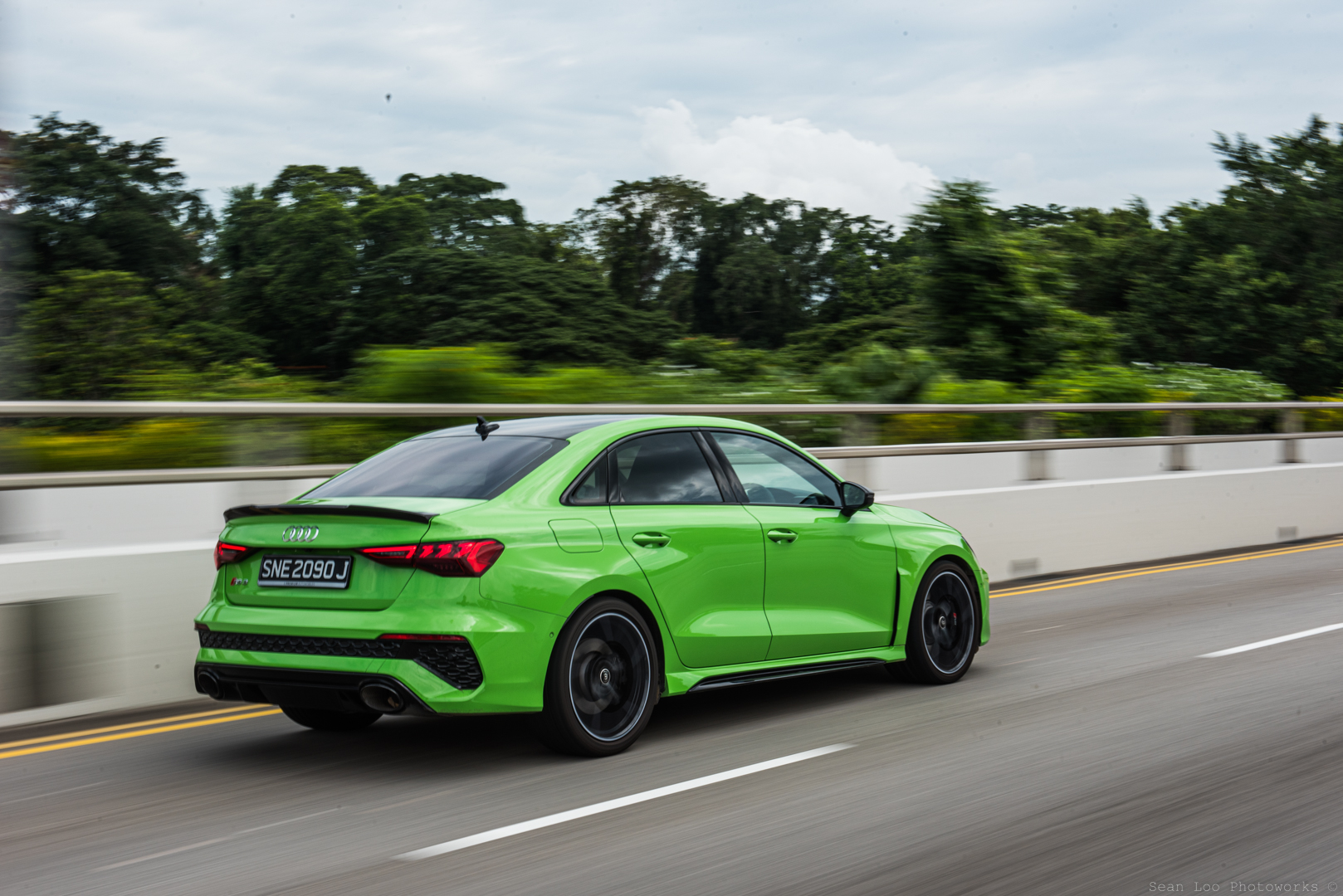 Being an RS 3, it's full of air ducts, vents, and other add-ons to keep the car as aerodynamic as possible, while staying cool under high pressure and at sustained high speeds for as long as possible. They may look garish or even obscene to some folks, but rest assured, they are fully functional and not merely Taobao specials.

Audi's outfitted it with flared arches and fenders, gaping vents up front, and even an optional carbon fibre spoiler on the bootlid.

Under the skin, the RS 3 is blessed with varying grades of high-strength and hardened steel, as well as aluminium. The result? A light sports saloon that weighs only 1,575 kg. And best of all, safety isn't compromised, with the RS 3 sharing its Euro NCAP safety ratings with the rest of the A3 lineup, scoring the full five stars. 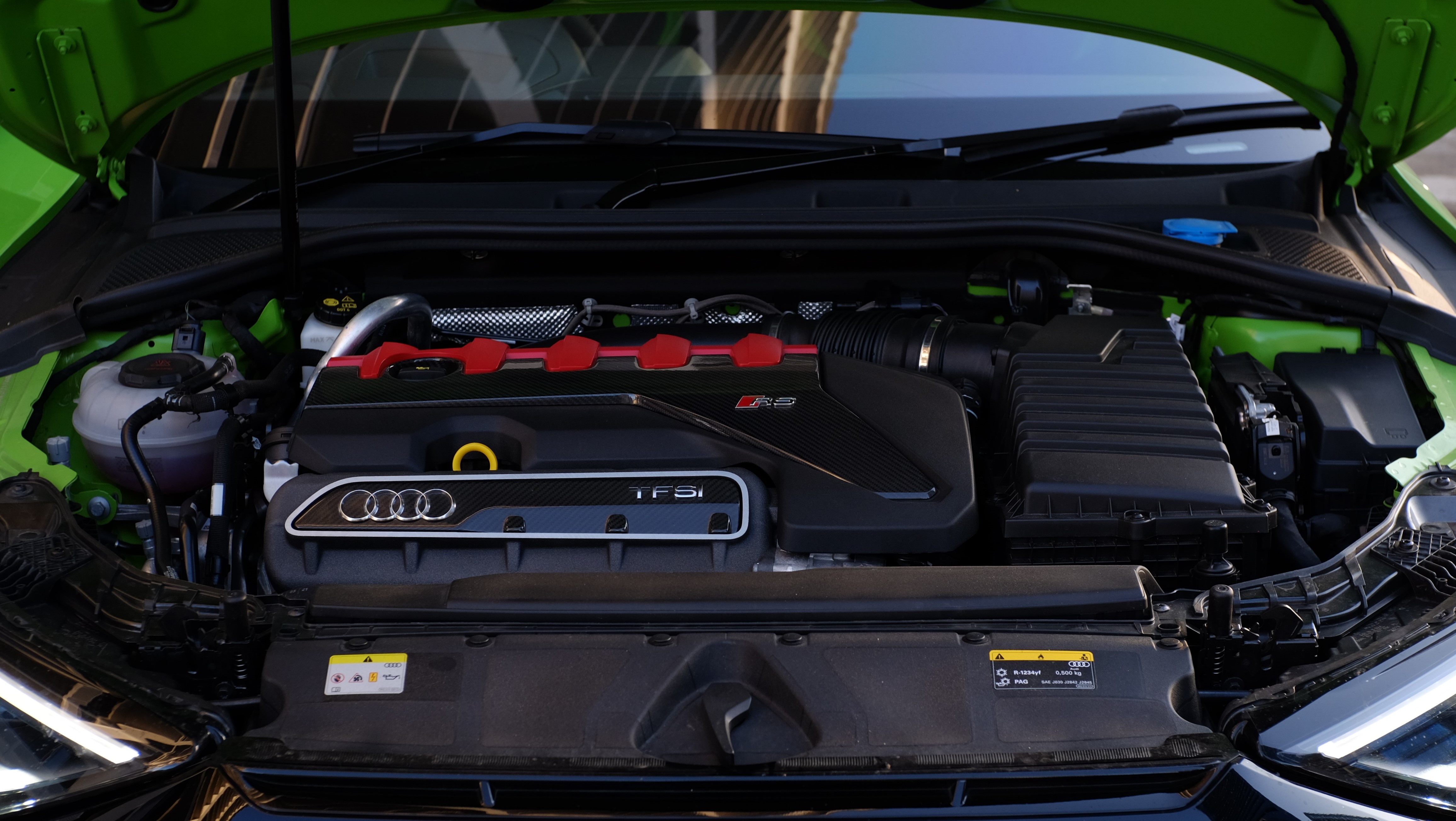 As you probably have already read in our RS 3 Sportback review, the 2.5-litre turbocharged five-cylinder engine is properly insane. The award-winning powerplant pushes out 400 horses; way more than a compact saloon has any business of having. And with 500 Nm of torque, expect to be thrown well back into the firm-yet-comfy Nappa leather bucket seats.

The engine truly sings when its revving all the way up to 7000 rpm, eliminating the need for a sound system inside. Its bassy note attracts attention everywhere it goes, and especially so when RS Performance mode is enabled. With the latter on, flaps in the exhaust system open up, allowing for the beast within to growl. 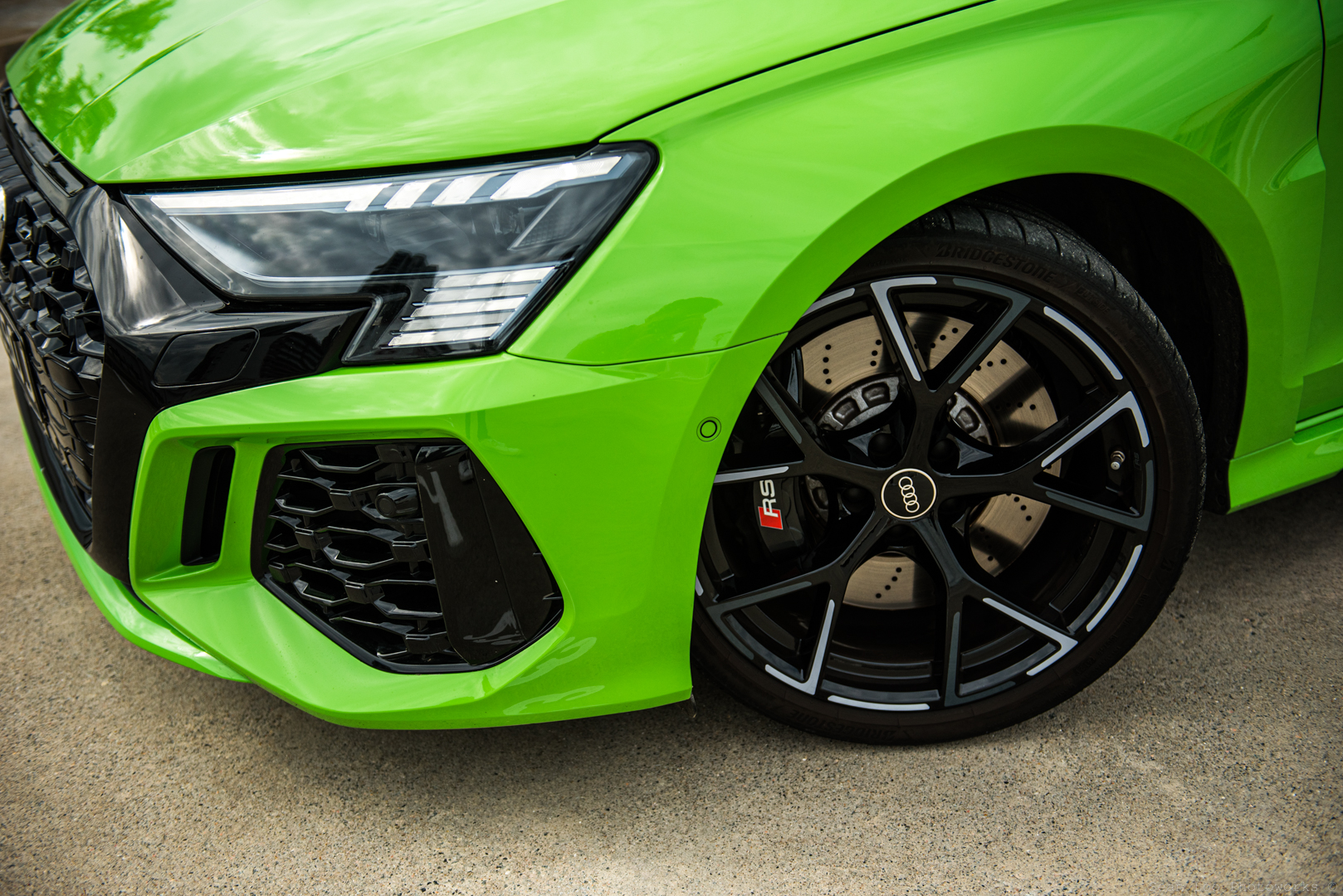 But all of that means nothing if the car is untameable. Thankfully, the brainiacs at Audi Sport have thought this one through.

You see, the RS 3 has what it calls the RS torque splitter, which complements the quattro all-wheel drive system. The former features an electronically-controlled clutch system that redistributes torque between the rear wheels at any given time (especially the outer one when executing corners), allowing it to be extremely precise and even able to perform controlled drifts.

For legal purposes, RS Torque Rear (which enables this functionality) should never be turned on on public roads.

And when it comes to stopping power, the RS 3 is equipped with ventilated brake discs on all four corners. Additionally, it comes with 245/35 R19 tyres up front, and 265/30 R19 ones behind, for superior grip. This particular press car features gloss black ten-spoke alloy wheels with white graphics.

Still An Audi Inside 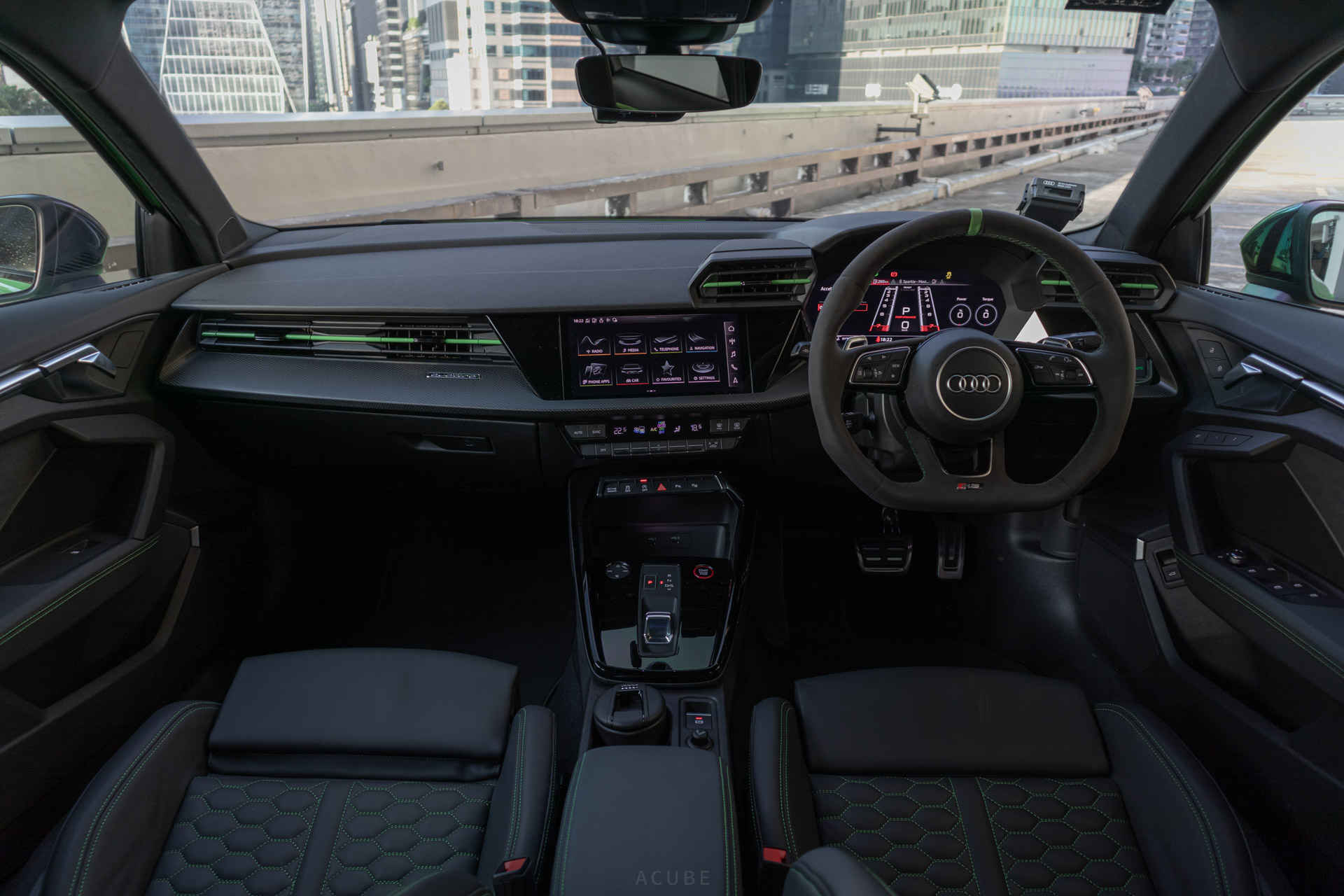 Despite all of the go-faster bits and bobs outside, the RS 3 is still refined inside, as an Audi should be. It is festooned with Nappa leather upholstery and soft-touch panels. Even the RS-branded bucket seats are electrically-adjustable. 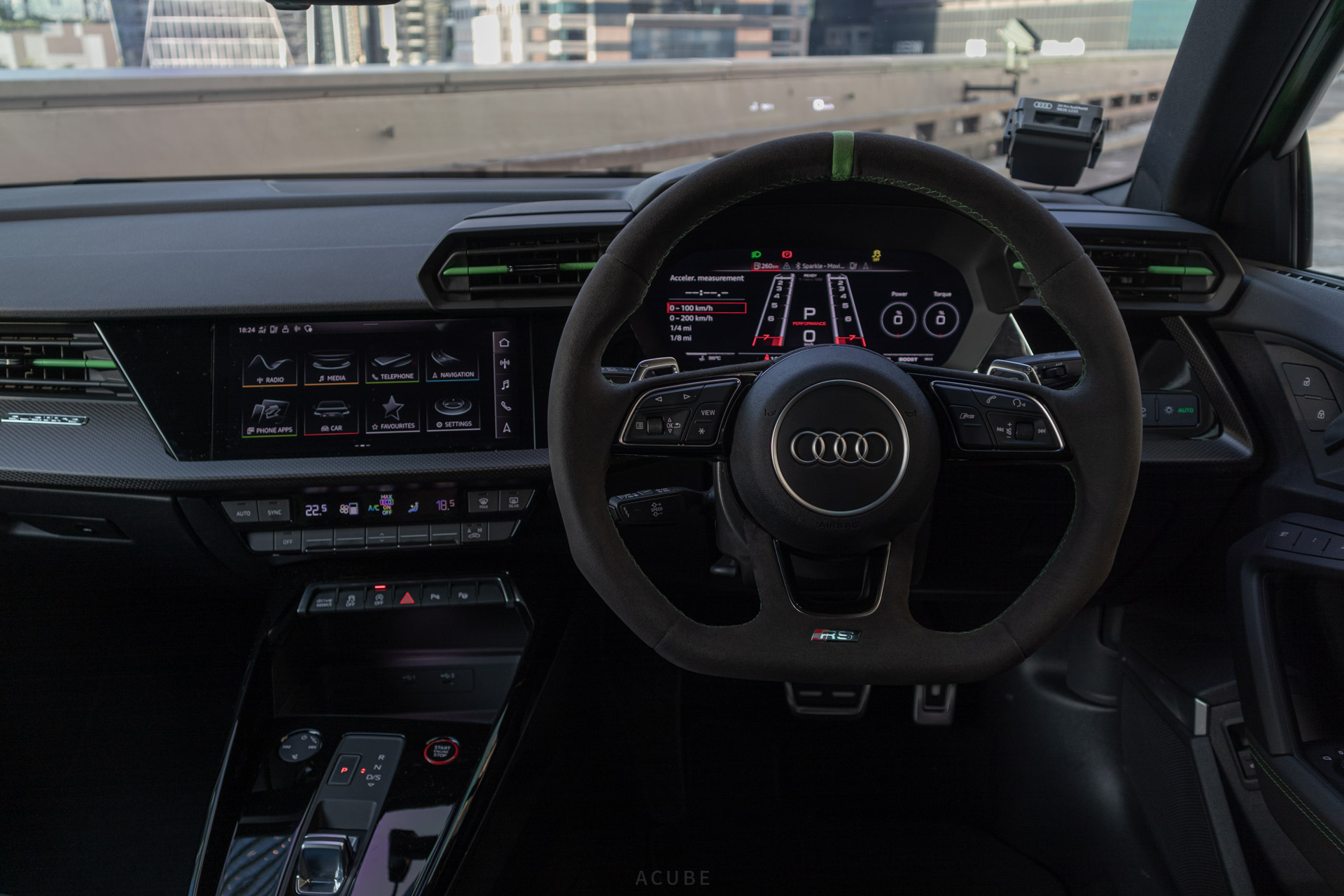 To remind you that it's not your average A3, however, the steering wheel is flat-bottomed, with colour-matching trim pieces strewn across the dashboard. Our press car was decked out with the optional alcantara-wrapped wheel with the 12 o'clock marker.

The digital screens are exactly the same as the ones on the Sportback; they helpfully show critical vehicle data, and feature an easy-to-read user interface that is highly customisable.

This being an RS 3, there are several track-ready settings made available to you. You can clock 0-100 km/h or 0-200 km/h times, for example, and there is a real-time monitor of the various fluid temperatures in the car. 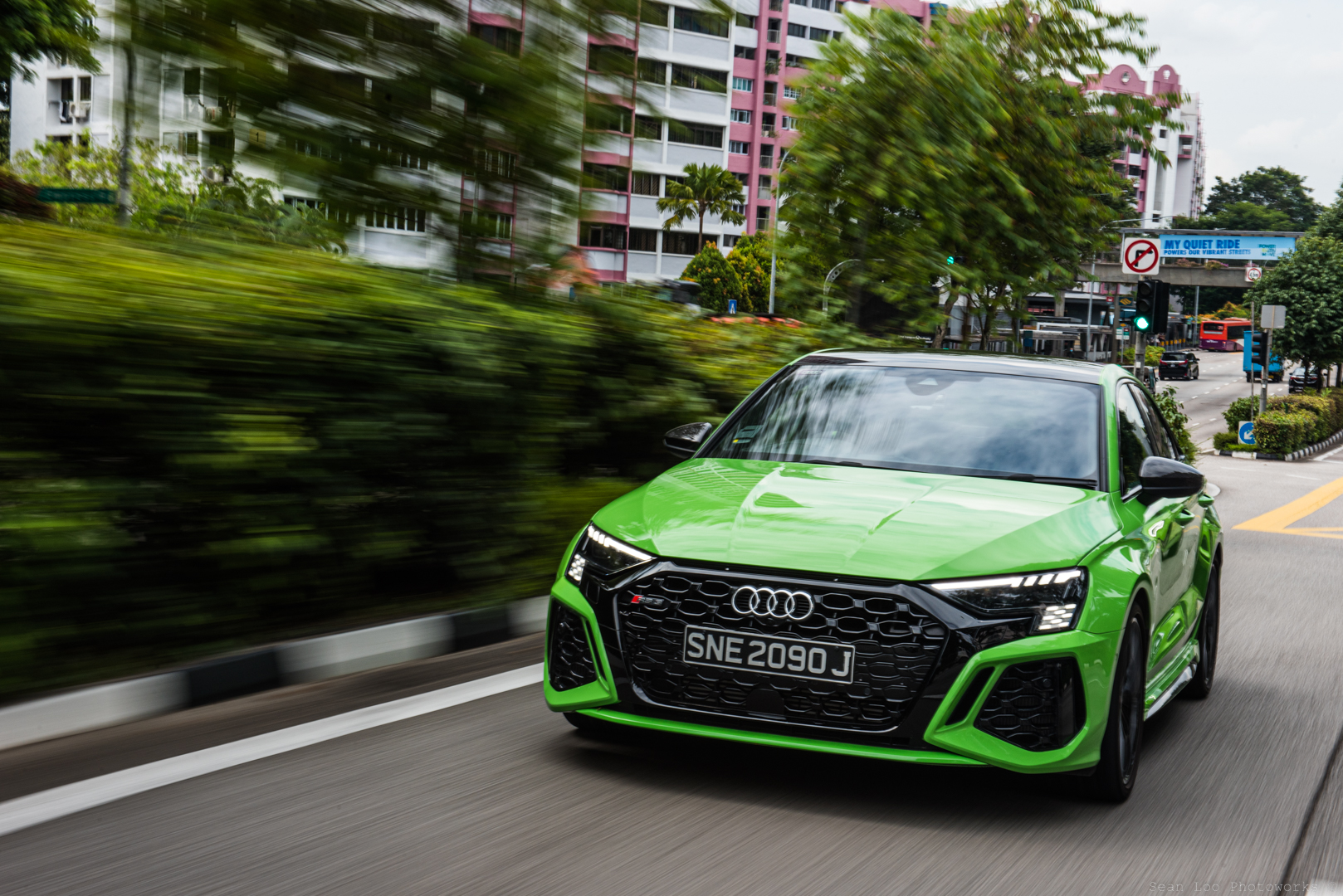 Believe us when we say that this car is fast. It completes a century sprint in 3.8 seconds, and a full lap around the famed Nordschleife takes just 7:40 minutes. To put these numbers into context, this family-friendly Audi saloon is just as quick as the track-focused Nissan GT-R from 2007.

Overtaking becomes too easy, and you can probably bomb down the Singapore expressway systems in record time. For legal purposes (again), the latter is hypothetical.

Steering is precise, and the car responds to every degree steering input faithfully.

And even with gobs of power at your disposal, the delivery is linear and does not catch you off-guard, sending you to the nearby ditch/lampost. That is, unless you are driving it like a madman.

A Trackday Special That Can Accommodate Your Family 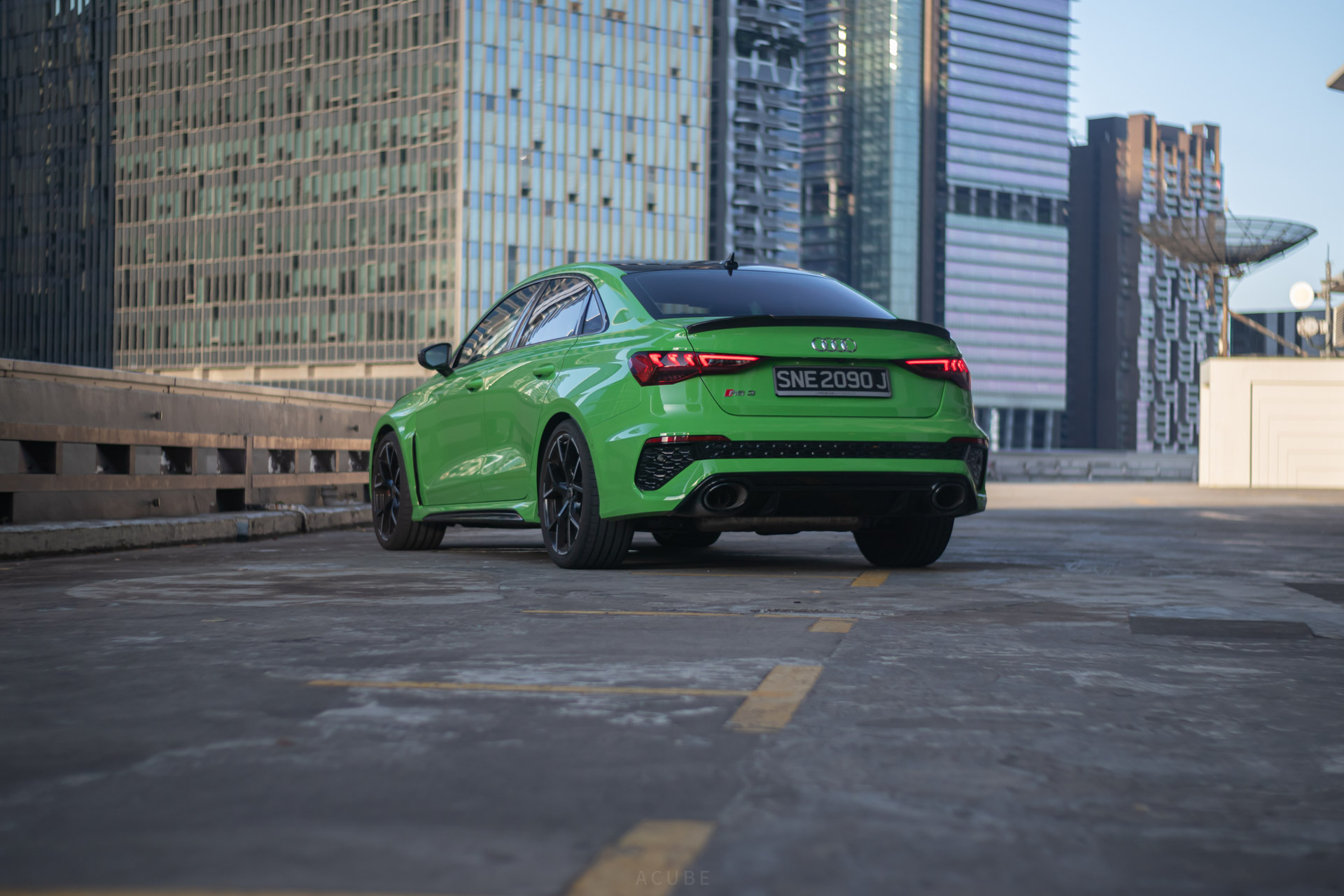 As we have concluded with the Sportback, this might just be Audi's greatest effort yet at creating a performance compact saloon. Despite its obvious trackday-oriented components, this is still very much a luxurious Audi that can accommodate the whole family and luggage.

The no-compromise approach allows the RS 3 to go well beyond conventional limits and show the world that the ICE party is still in full swing.