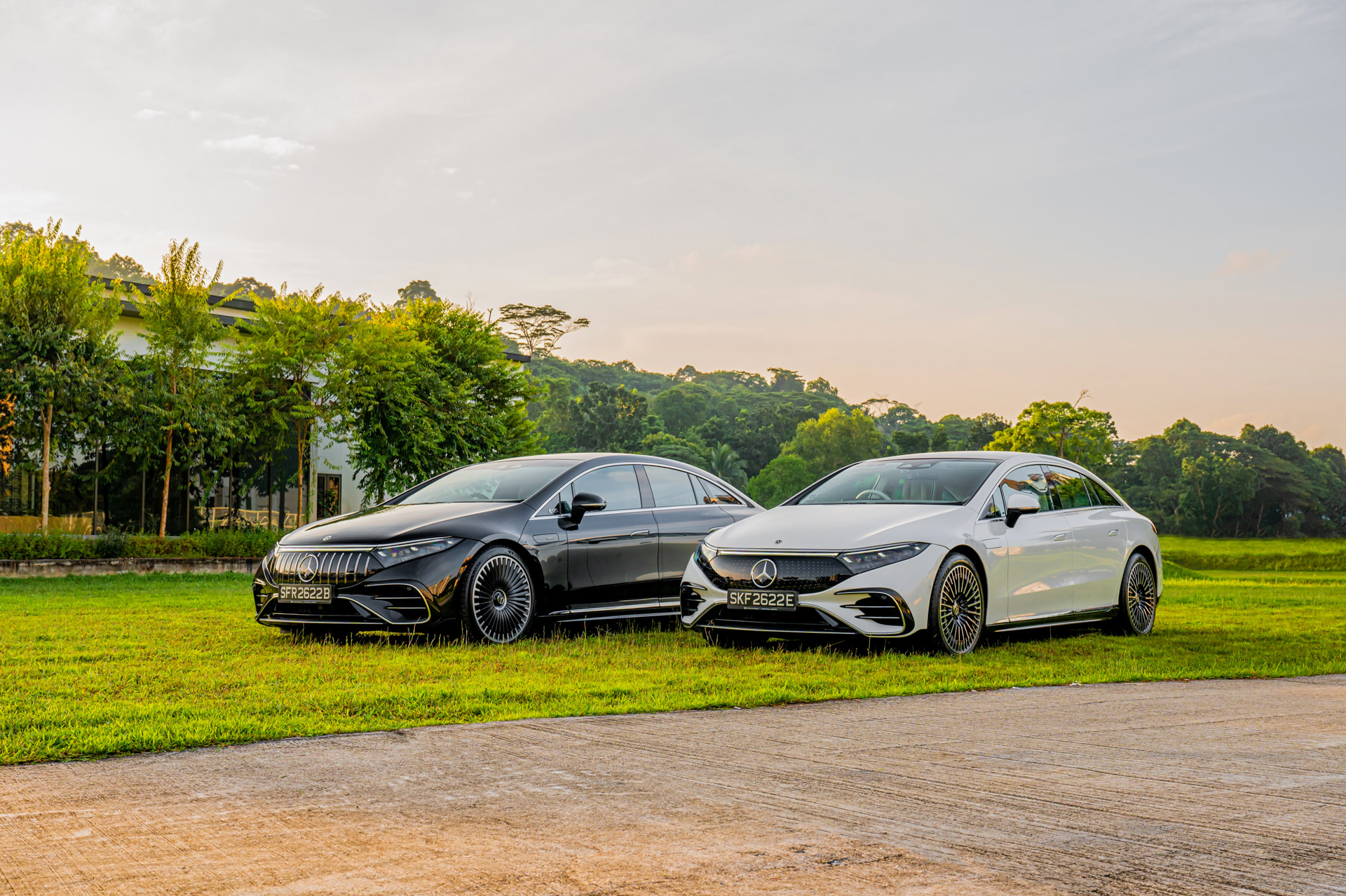 Mercedes has officially unveiled their first ever all-electric luxury saloon built from the ground-up as a dedicated BEV. It is the first in a series of new Mercedes-EQ models built on this new modular architecture.

At launch, two variants of the Mercedes EQS are available for purchase - there’s the more ‘vanilla’ EQS 450+, and the sportier Mercedes-AMG EQS 53 4MATIC+. The former will have a segment-leading range of up to 762km per full charge, with the latter sacrificing some range for (a lot of) additional performance.

The big range figures are a result of meticulous detail work, with the German automaker’s aerodynamicists creating a car that is the most aerodynamic production car in the world, setting a new Cd benchmark of 0.20. 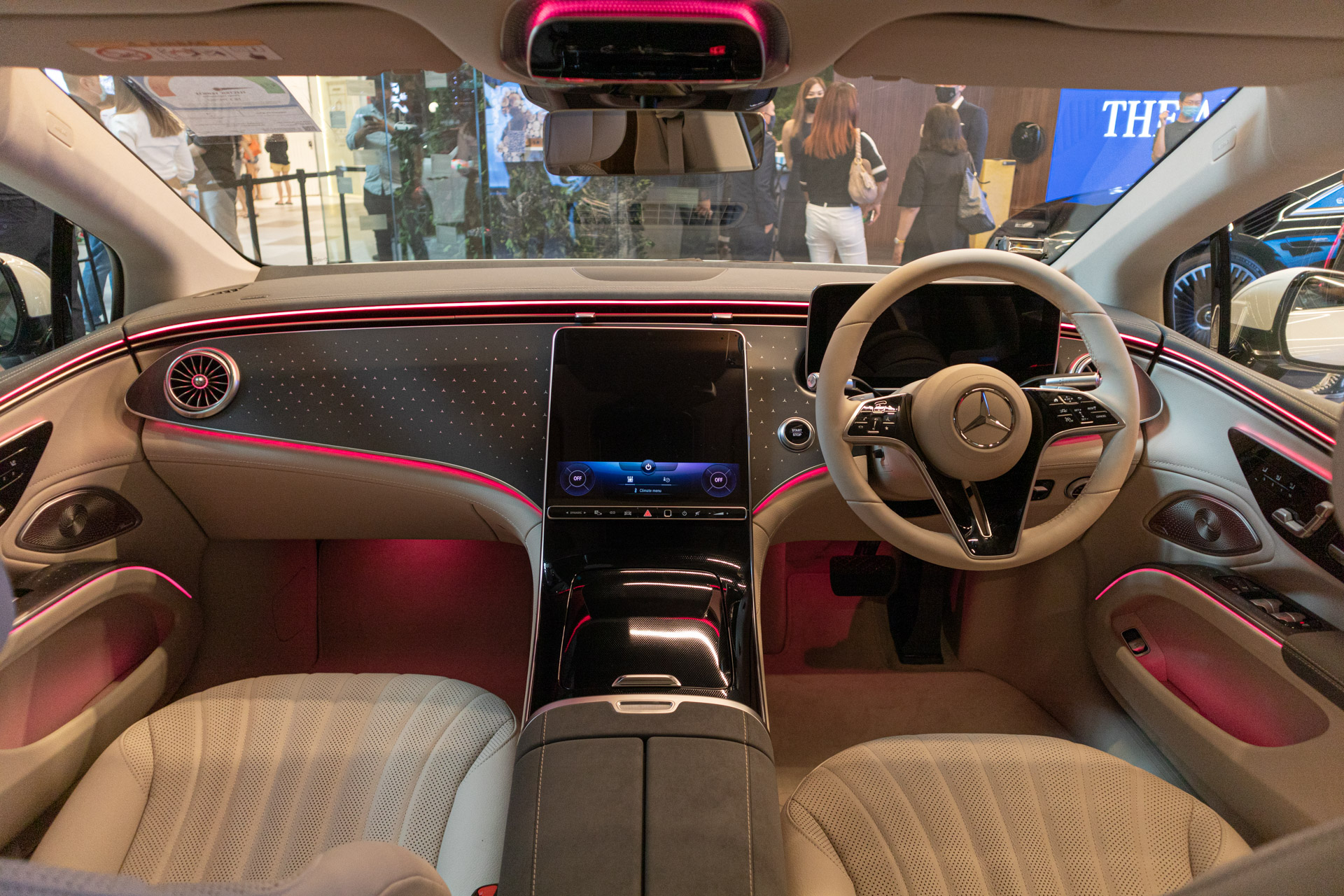 This completely new concept made a rigorous “Purpose Design” possible, with its one-bow line and cab-forward design the EQS is clearly distinguishable from vehicles with combustion engines even at first glance.

In essence, the car’s so-called greenhouse, is as taut as a bow in the EQS. A coupé-like silhouette is created in conjunction with the sportily low and slim front, further underlined by the frameless doors and a high, curved beltline as an independent design element. The cab-forward design helps create space in the EQS for a generously dimensioned passenger compartment.

Which Is The Variant For Me?

Despite sharing the same platform, both cars do have different optimisations. The single motor EQS 450+ has the aforementioned 762 kilometres of range and an output of 245 kW. Designed as the more mass-market-friendly variant of the EQS (if there ever was such a thing), the car as featured does lack some of the fancier features that you’d find on the EQS 53 4MATIC+ as standard, such as the MBUX Hyperscreen. 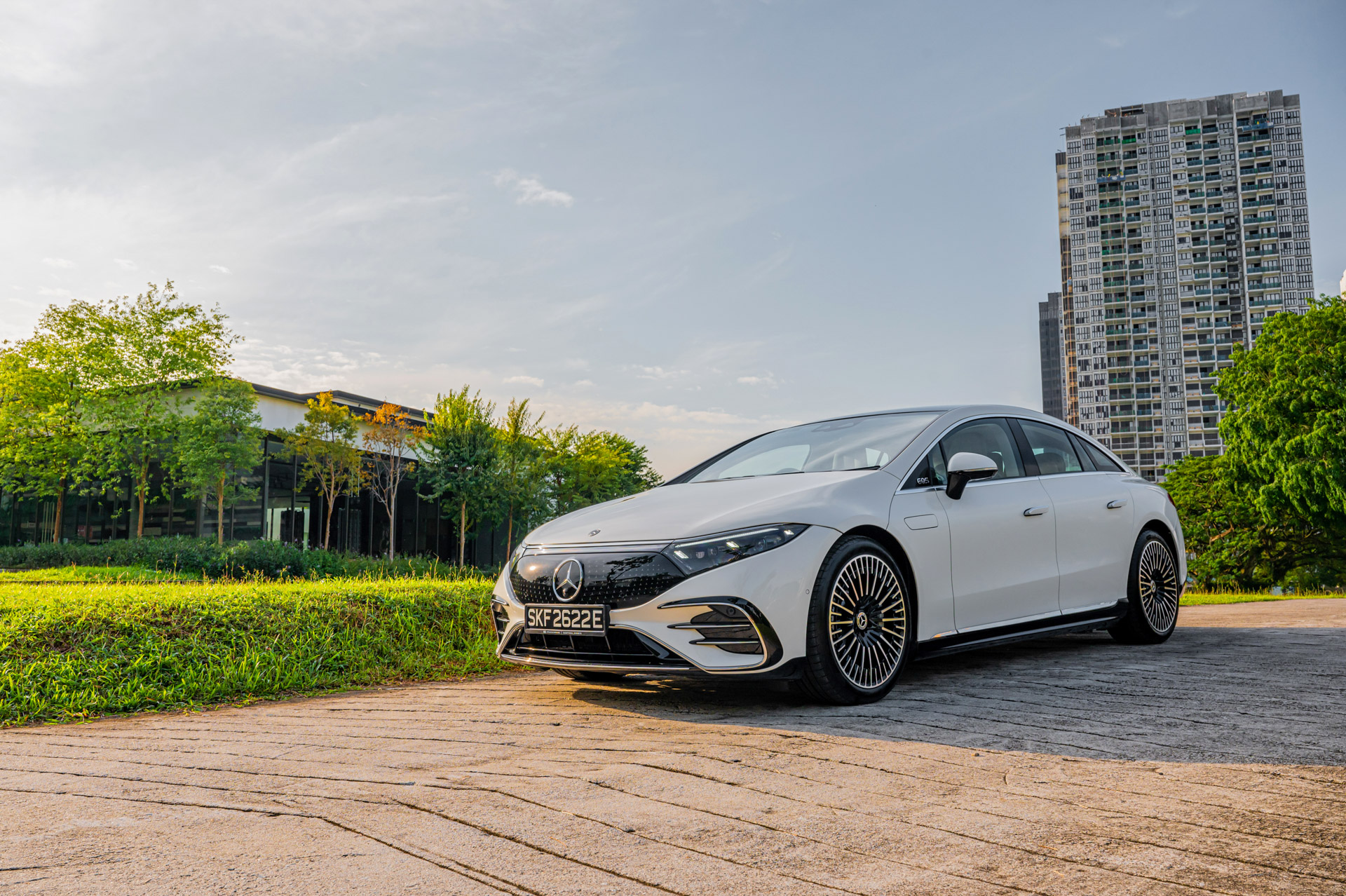 If you have a bit more cash to splash, or would prefer your luxury saloon to have some supercar-beating power, you’ll want the EQS 53 4MATIC+. There are alterations under the skin of this variant, which includes the addition of a front motor, and AMG-specific body stiffening measures.

The AMG variant is also good for 484 kW, with a range estimate of about 570 kilometres. Not impressive enough for you? It also has a Race Start function, which temporarily increases the max output and top speed accordingly, allowing the car to sprint to 100km/h from a standstill in 3.4 seconds, instead of the 3.8 when left on a lower power setting.

A feature unique to the AMG-ified EQS is what the engineers have dubbed the “AMG Sound Experience”. The vehicle sound has always been an important part of the typical AMG driving experience, and this will be true even as Mercedes transitions into electric power. 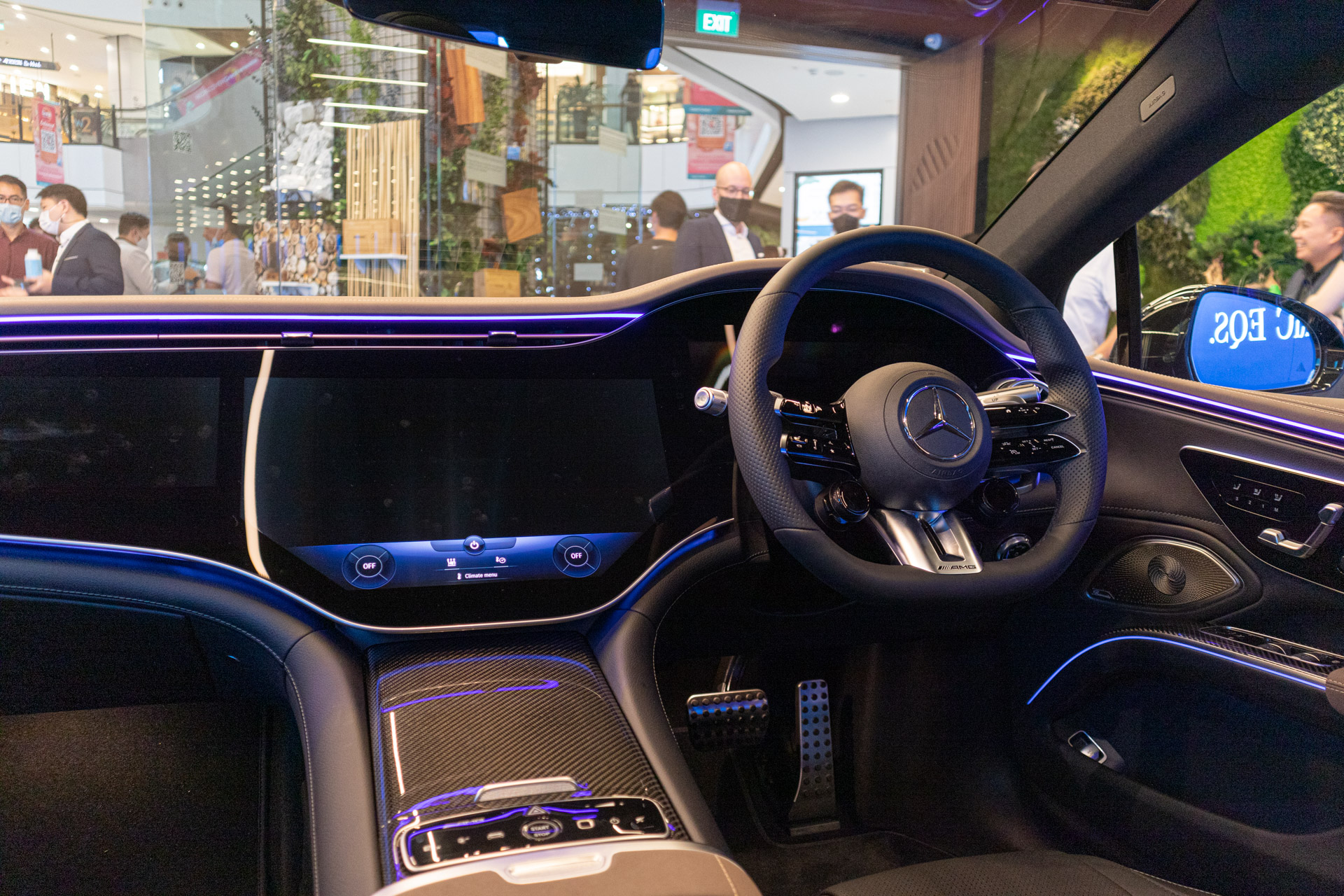 Its sound system will use special speakers, a bass actuator and a sound generator to create a special sound experience in two versions: "Authentic" or, as an option, "Performance". This exclusive AMG Sound Experience is generated inside and out with a tonality and intensity to match the current driving status, the selected driving mode or the driver's wishes.

Fast Charging Up To 200kW

You’ll find what is currently the largest battery pack fitted to a production car in the underbelly of the EQS. Which is why Mercedes gave the car fast charge capabilities of up to 200kW, adding up to 300 kilometers of range in just 15 minutes.

An absolute highlight in the interior of the AMG EQS 53 4MATIC+ is the MBUX Hyperscreen fitted as standard. This large, curved screen unit sweeps almost from A-pillar to A-pillar. Three screens sit under a cover glass and appear to merge into one. 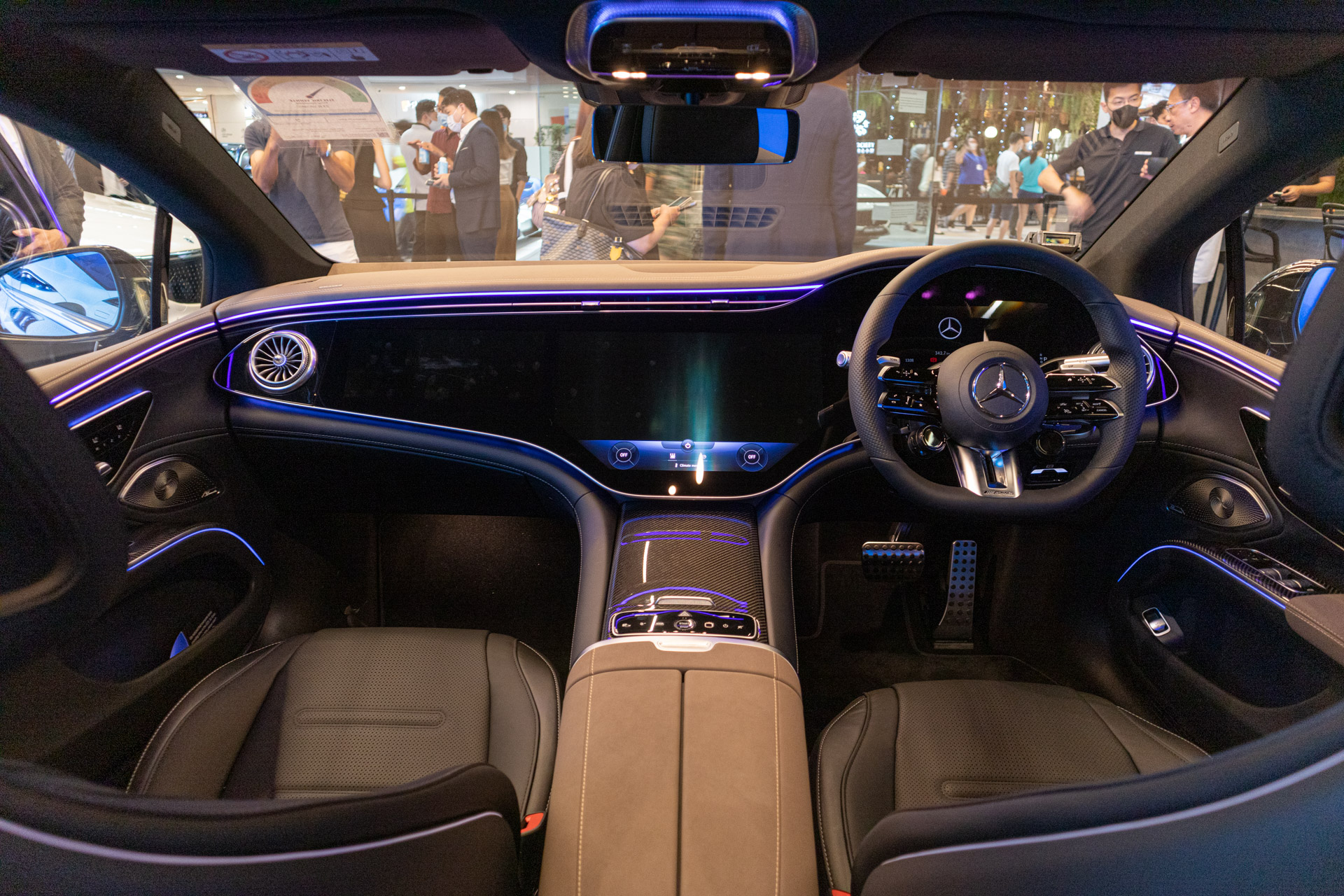 The 12.3-inch OLED display for the front passenger gives the driver their own display and control area. The entertainment functions are only available while the car is being driven in accordance with the country-specific legal regulations - Mercedes-EQ relies on an intelligent, camera-based locking logic: if the camera detects that the driver is looking at the front passenger display, it is automatically dimmed.

Don’t for one think that the EQS is just a reskinned, electrified S-Class. It has been built on a new, all-electric architecture, which allows for greater optimisation of space and mechanical competency. 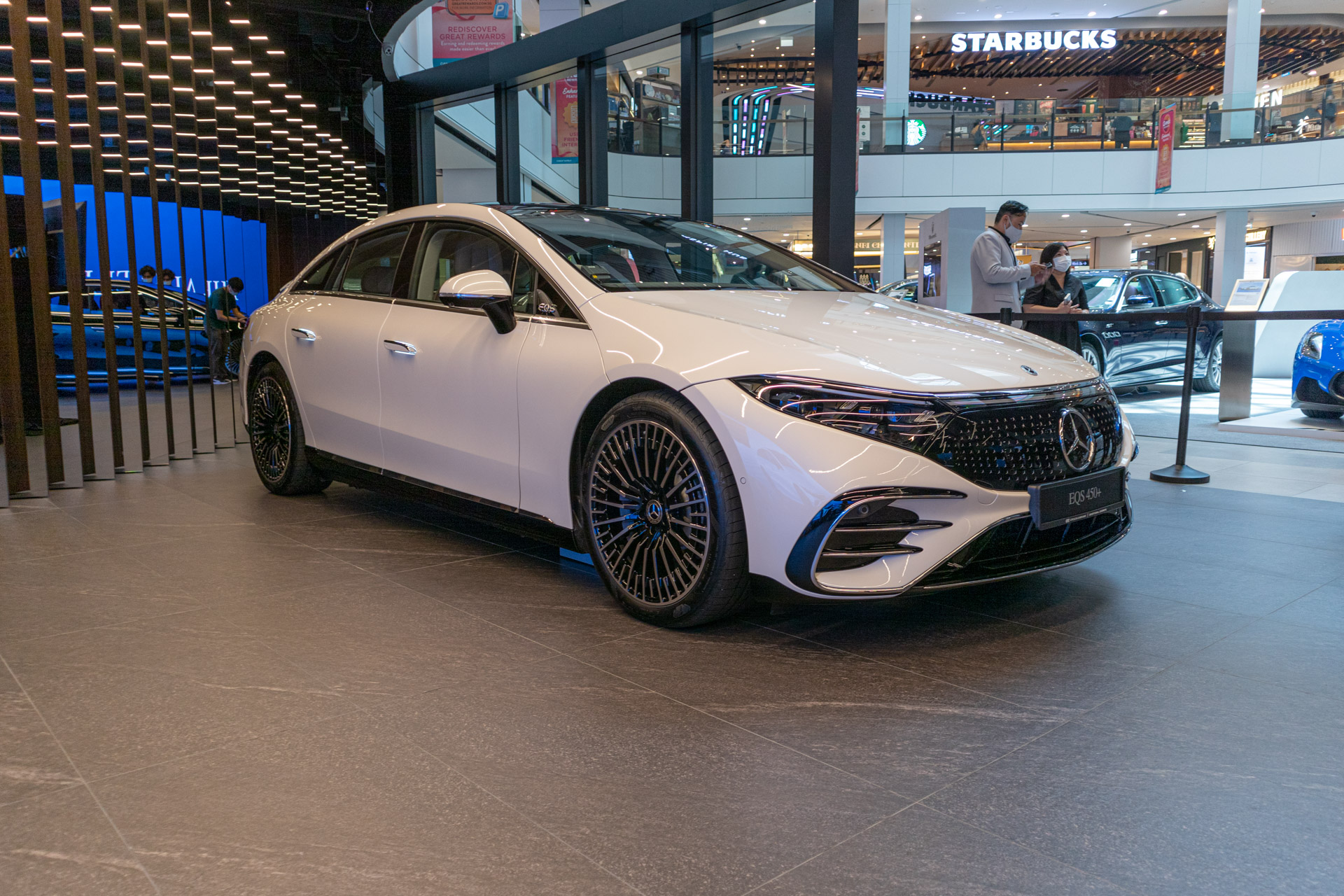 Pricing aside, the EQS is proof that we now have the technology to build electric vehicles capable of commuting well past the city limits, and can be competent even on a long road trip up North!