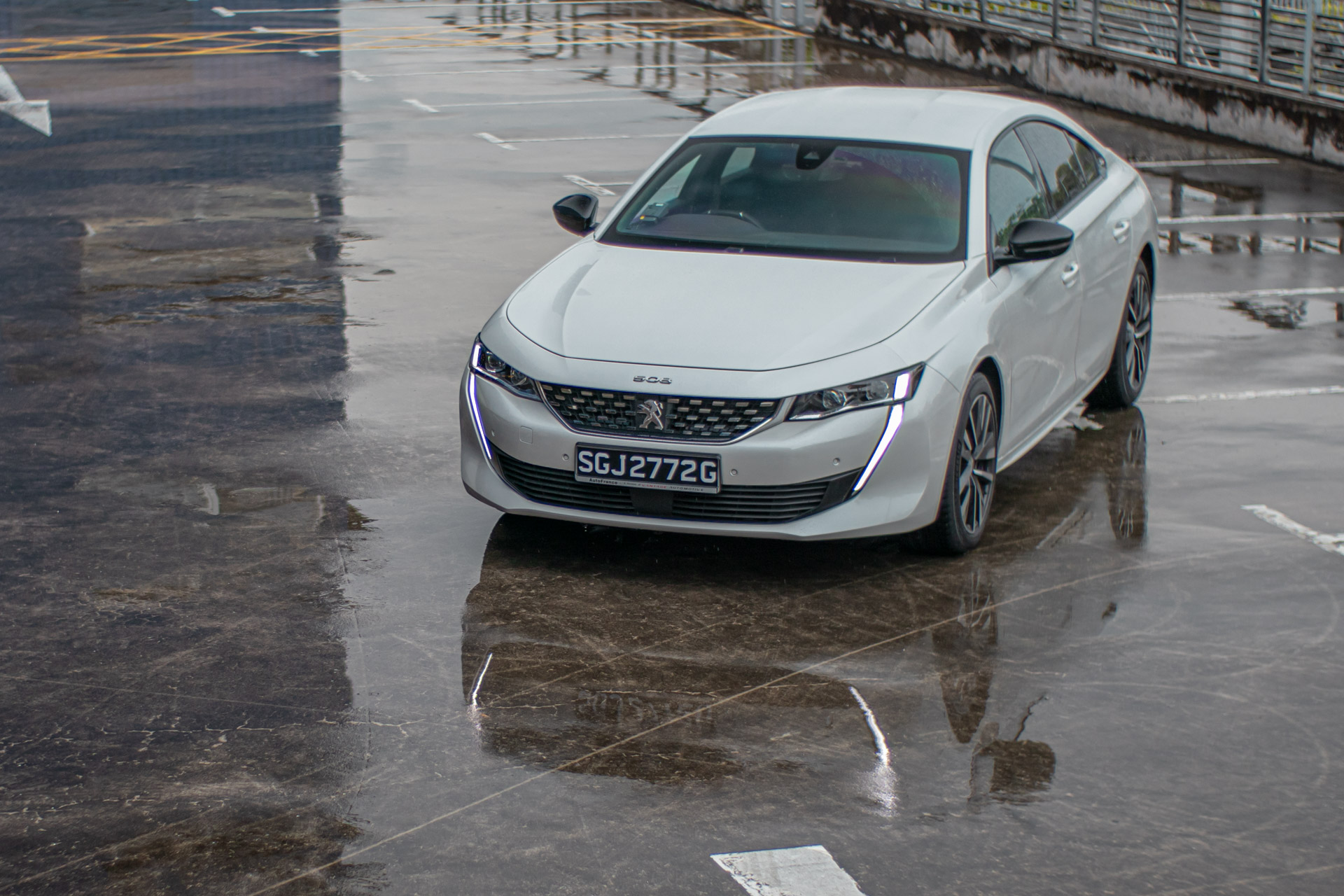 Concept cars are rarely translated wholesale into production-ready ones. Bold looks aside, pesky things such as safety regulations and practicality criteria have to be fulfilled, and that usually means watering down the initial designs significantly.

Peugeot clearly felt that they could have both their cake and eat it when they lifted the covers off of their new 508 fastback, and we love them for it. The stately 508 nameplate makes a grand return to the international market, and it’s quite simply a stunner.

Is this sleek new flagship a sign of good things to expect from the French automaker down the road, or is it simply a flash in the pan? 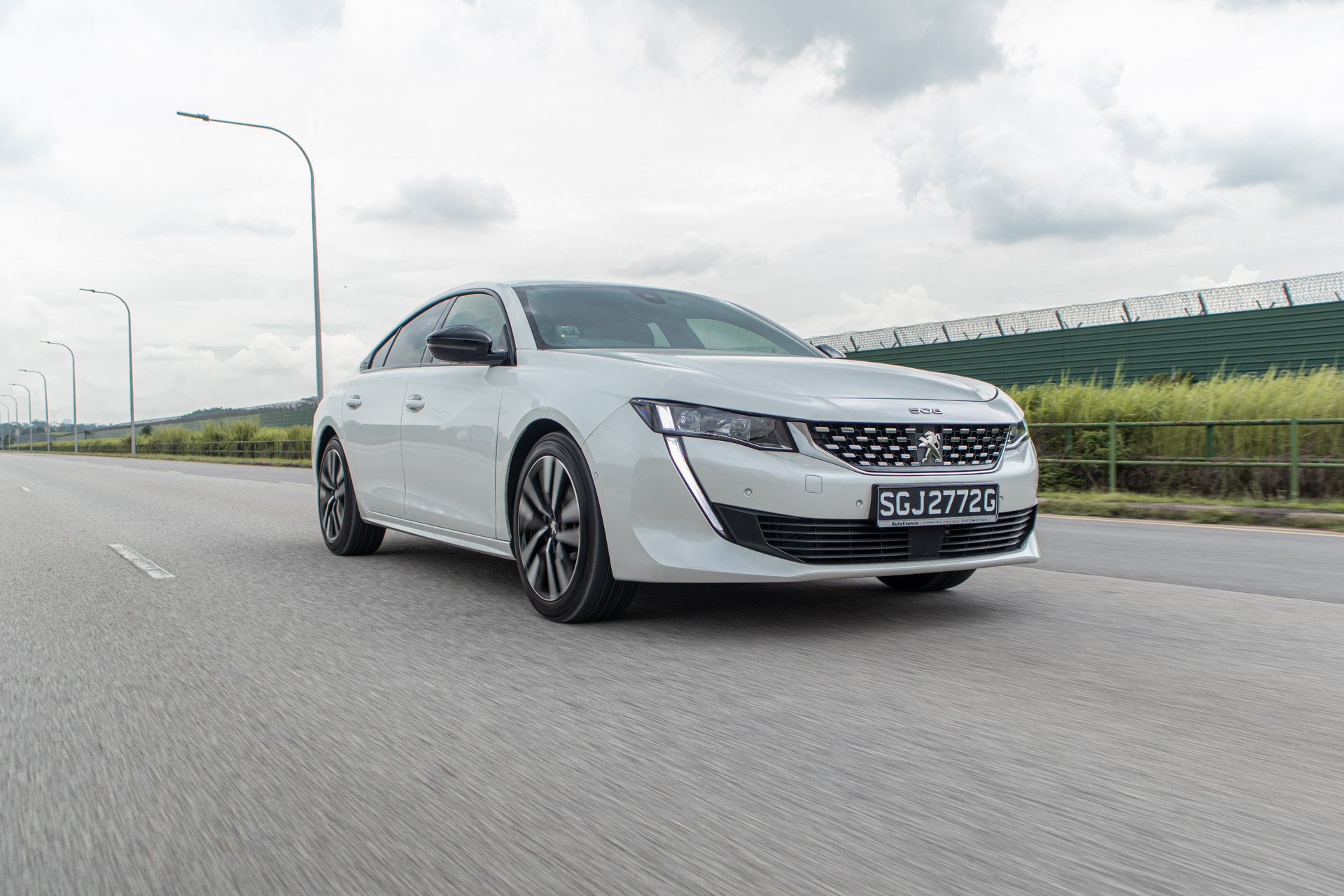 Peugeot - a brand once synonymous with wild rallying machines and even wilder concept cars, has been on the doldrums in recent years with pedestrian-looking vehicles. The previous generation 508 itself seemed visually hollow, with about as much charisma as a bar of soap.

All of that has changed with this new model, which looks straight out of a cyberpunk setting. The muscular and low-slung silhouette bears a strong resemblance to the automaker's 2017 Instinct shooting brake concept car, down to the angry snarling front fascia and aggressive stance, almost as if the car's ready to pounce anytime. 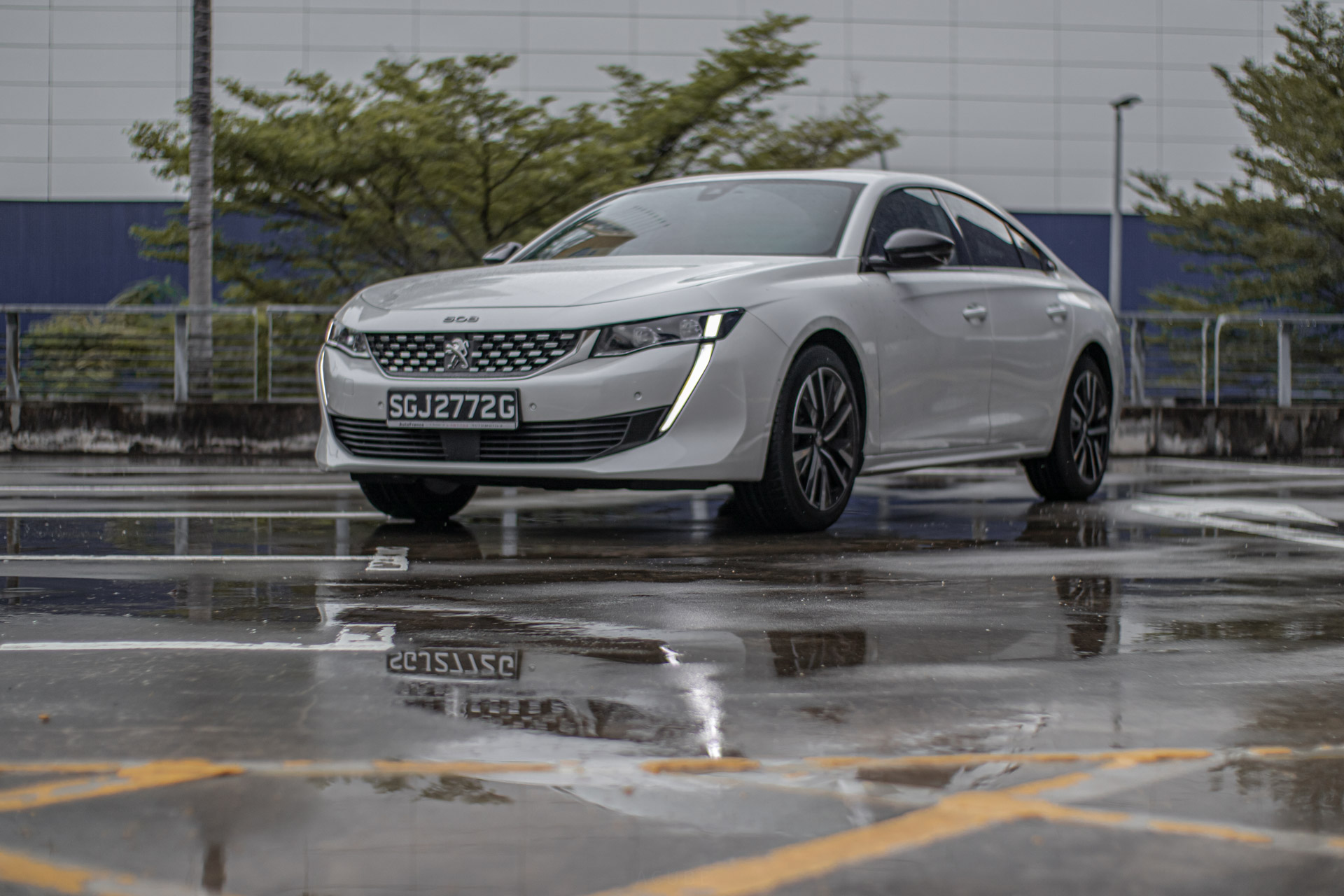 And yet, there's something strangely nostalgic to its design. I'm of the opinion that this is a more matured and modern interpretation of the 406 saloon of the early 2000s, which was made famous by the Taxi movie franchise. Both cars possess as sense of subdued aggression, and it's refreshing to see it again on a Peugeot in 2022.

Sporty design aside, this top-shelf 508 is also genuinely practical, thanks to its fastback nature. With the rear bootlid and glass fully open, you can store up to 487 litres of cargo. With the rear seats folded down, space is exponentially increased to a grand total of 1537 litres. 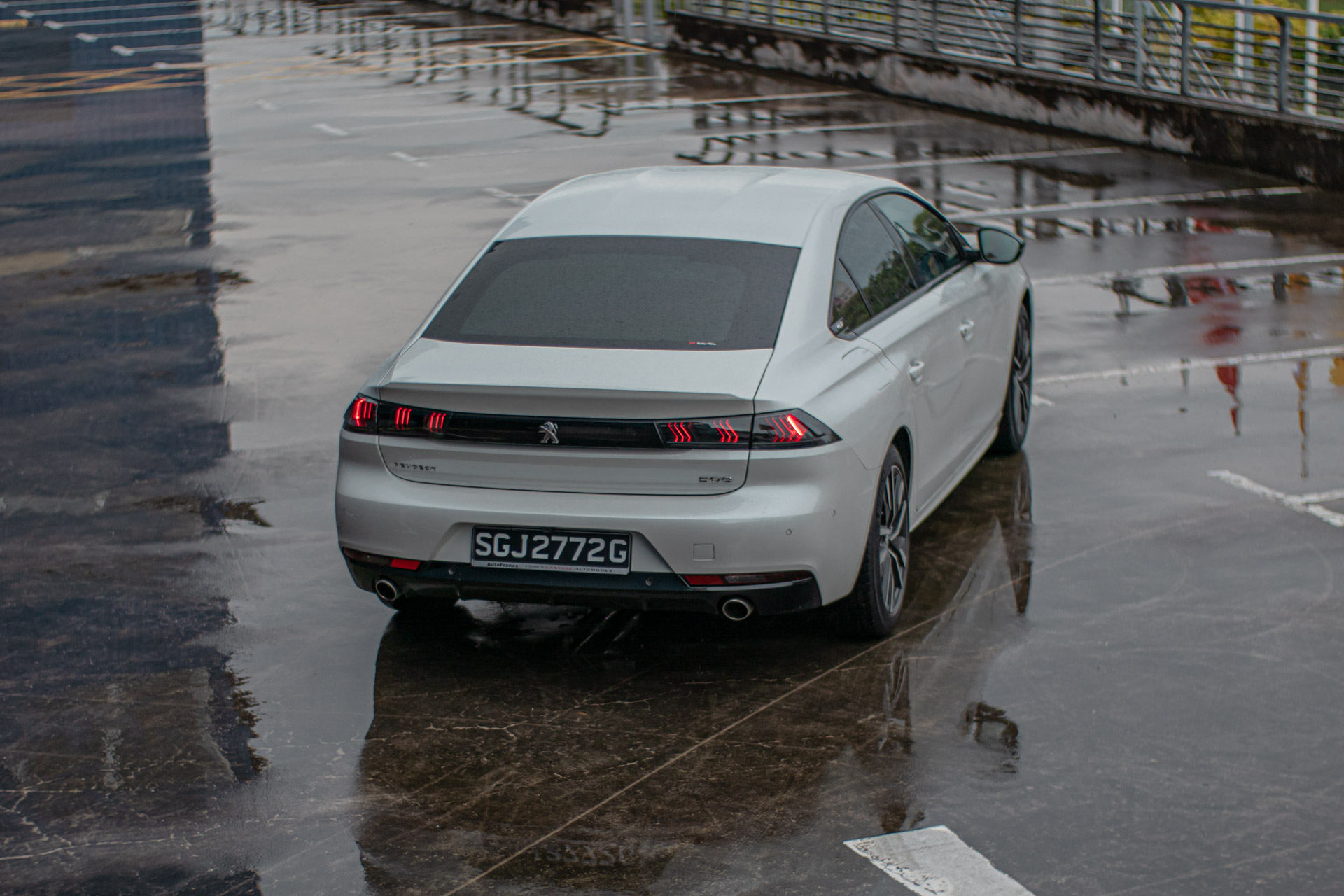 Sporty design aside, this top-shelf 508 is also genuinely practical, thanks to its fastback nature. With the rear bootlid and glass fully open, you can store up to 487 litres of cargo. With the rear seats folded down, space is exponentially increased to a grand total of 1537 litres.

Stepping inside, Peugeot's future-forward vision continues. There's a cohesive mix of Nappa leather and soft-touch plastics around, and driver-centric switchgear to tinker with. The piano key-style buttons are fairly tactile, as is the curiously-shaped gear lever. And on the door cards, the 508 features subtle mood lighting. 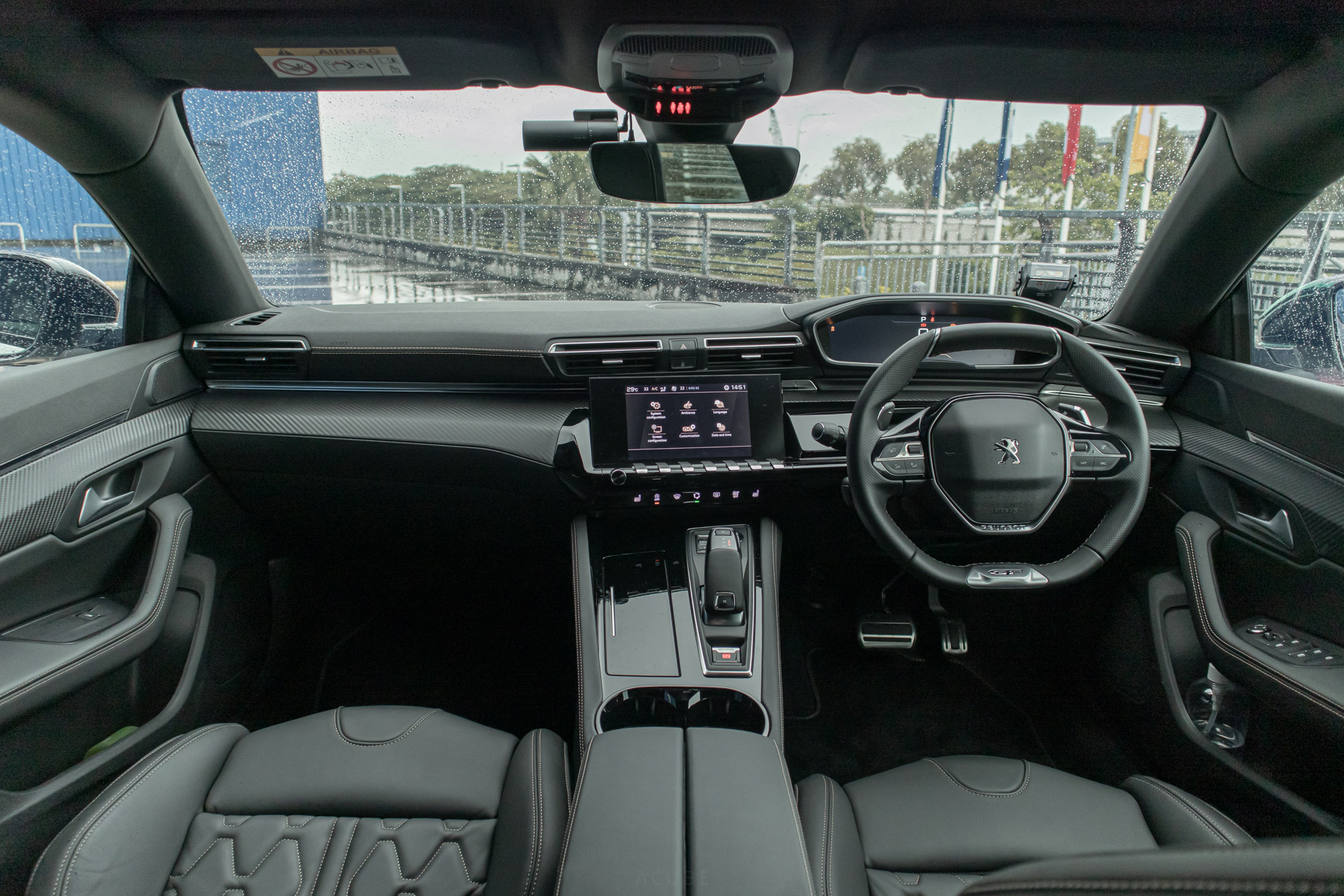 Cabin space is fairly copious up front too. Both driver and front passenger have access to plenty of space, made easier with electrically adjustable seats and mechanical cushion extensions. There's even a massage function for them, which we found to be a boon to use.

HVAC settings can be controlled via the 8-inch central touchscreen, although I do prefer them to be physical dials and buttons. 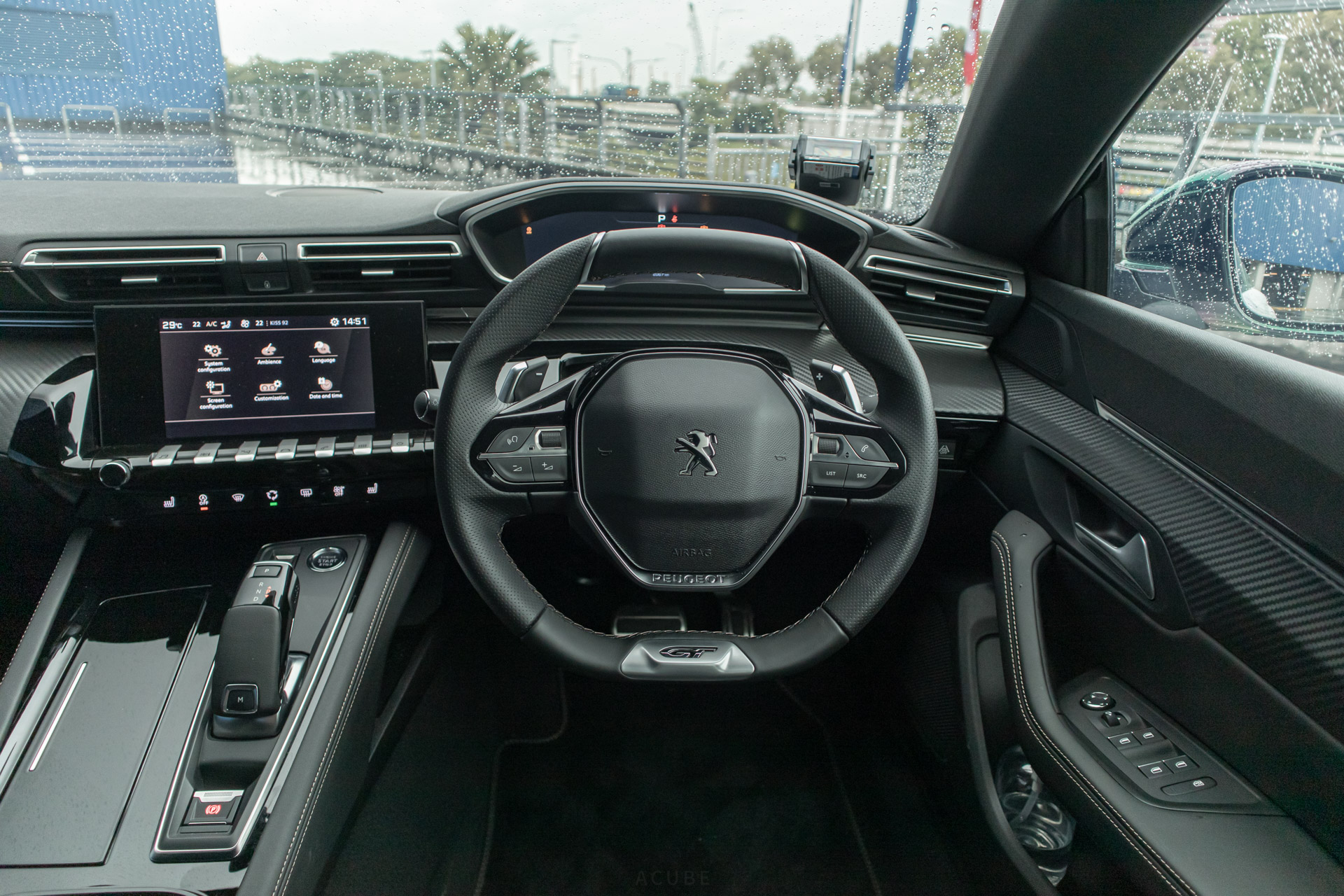 Peugeot's controversial i-Cockpit element is present, with an angular (and small) steering wheel positioned just below the 12.3-inch digital instrument cluster. The idea is to view the screen just above the wheel, which may not sit well with some drivers. Personally, I'm not too fond of it, but some colleagues are fine with this "reinvention of the wheel", both in the literal and figurative sense. 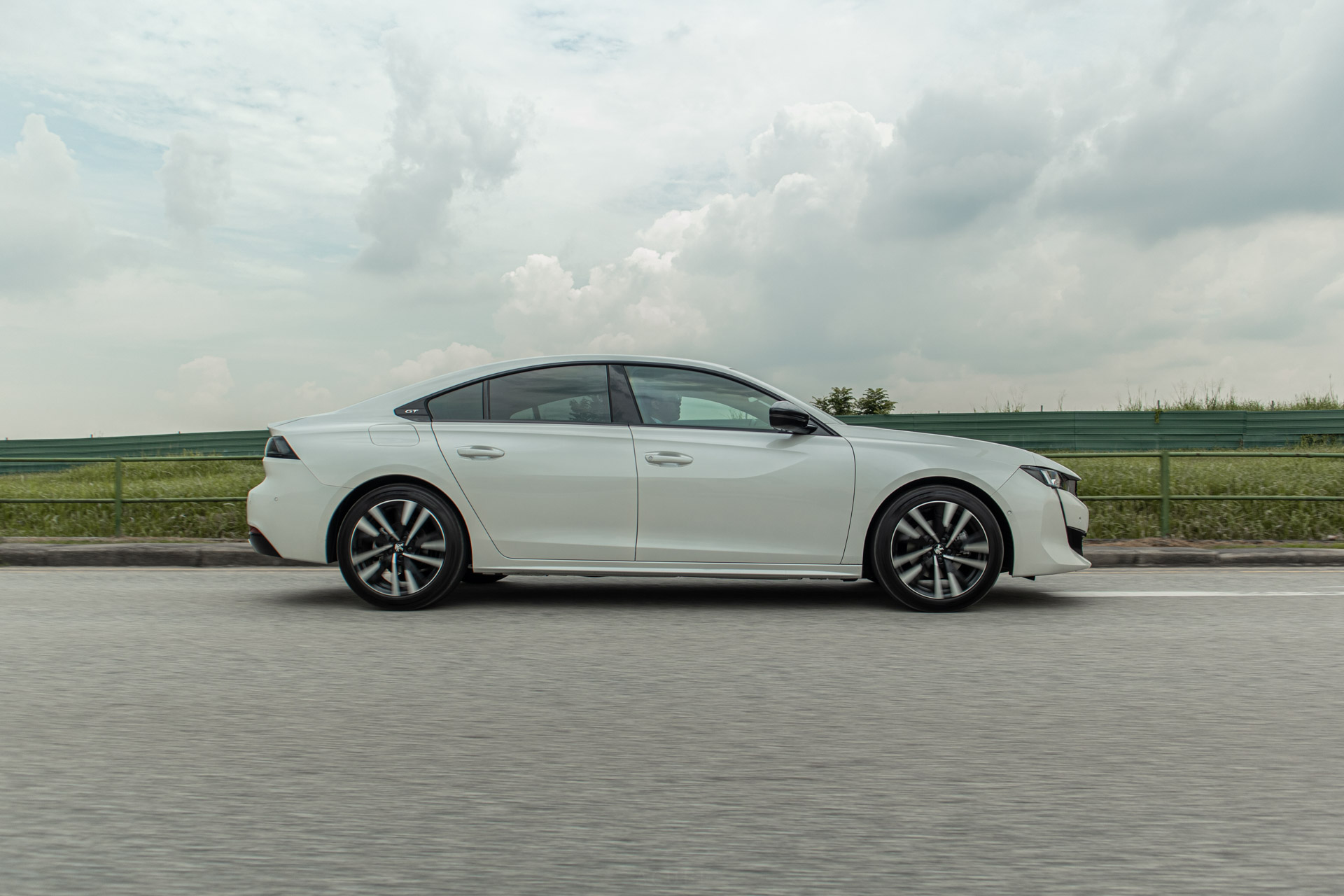 Rear cabin is not as swanky, unfortunately. Despite the 508's lengthy 2.8-metre wheelbase, legroom was just enough for a 1.75-metre adult on either sides. The seats themselves are rather comfortable, with dual rear AC blowers to cool occupants off and USB ports to charge various devices. 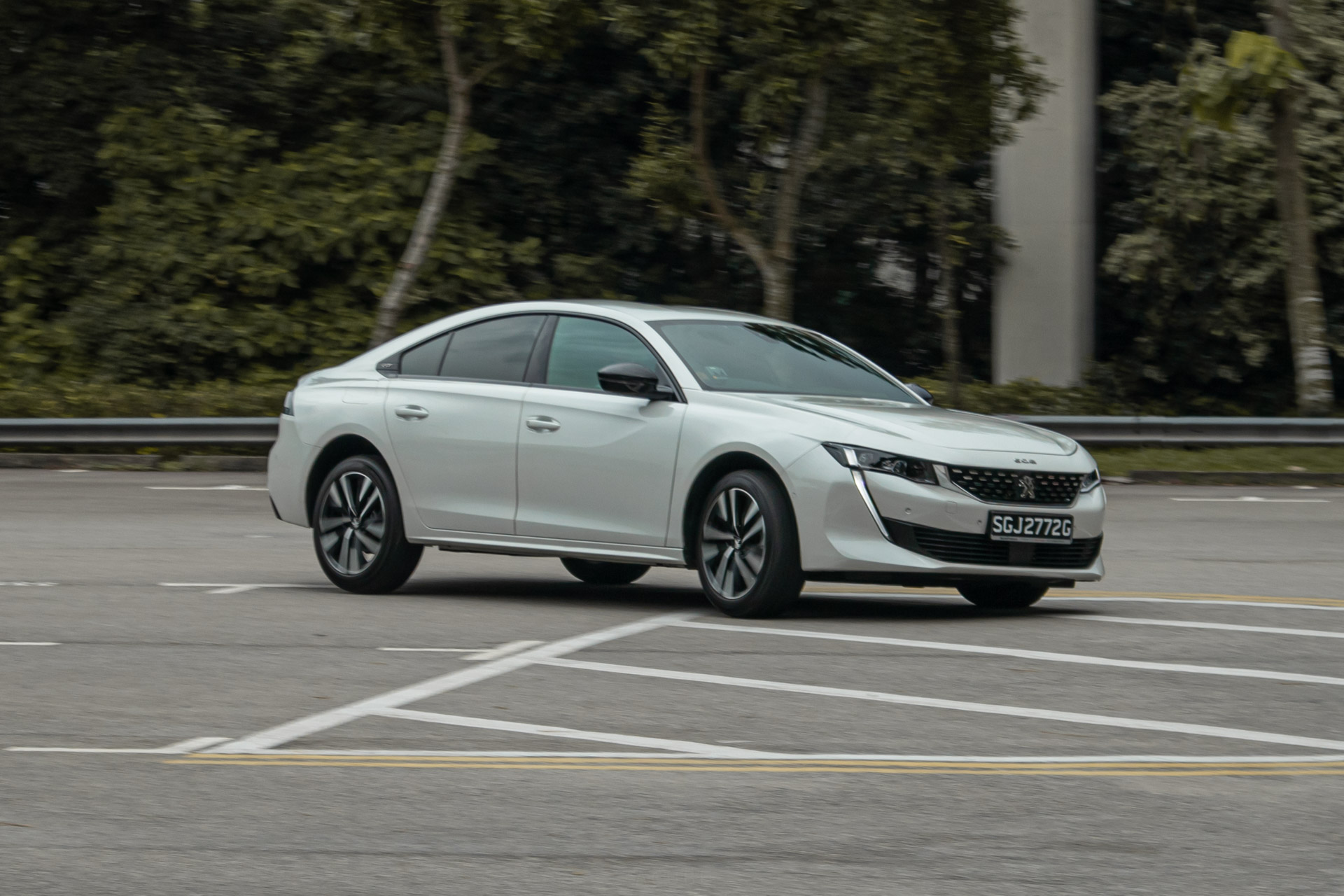 While the steering wheel dimensions are controversial, the Pug is fairly responsive and well-weighted, making for a highly manoeuvrable car. Navigating around tight carparks is easy, and blindspots are kept at a minimum.

The 508's powerplant, a 1.6-litre turbocharged four-banger, provides about 178 horsepower and 250 Nm of torque, a decent punch for Singapore roads. The exhaust note sounds quite lovely too, and not at all intrusive. Nought to a hundred takes approximately just under nine seconds. 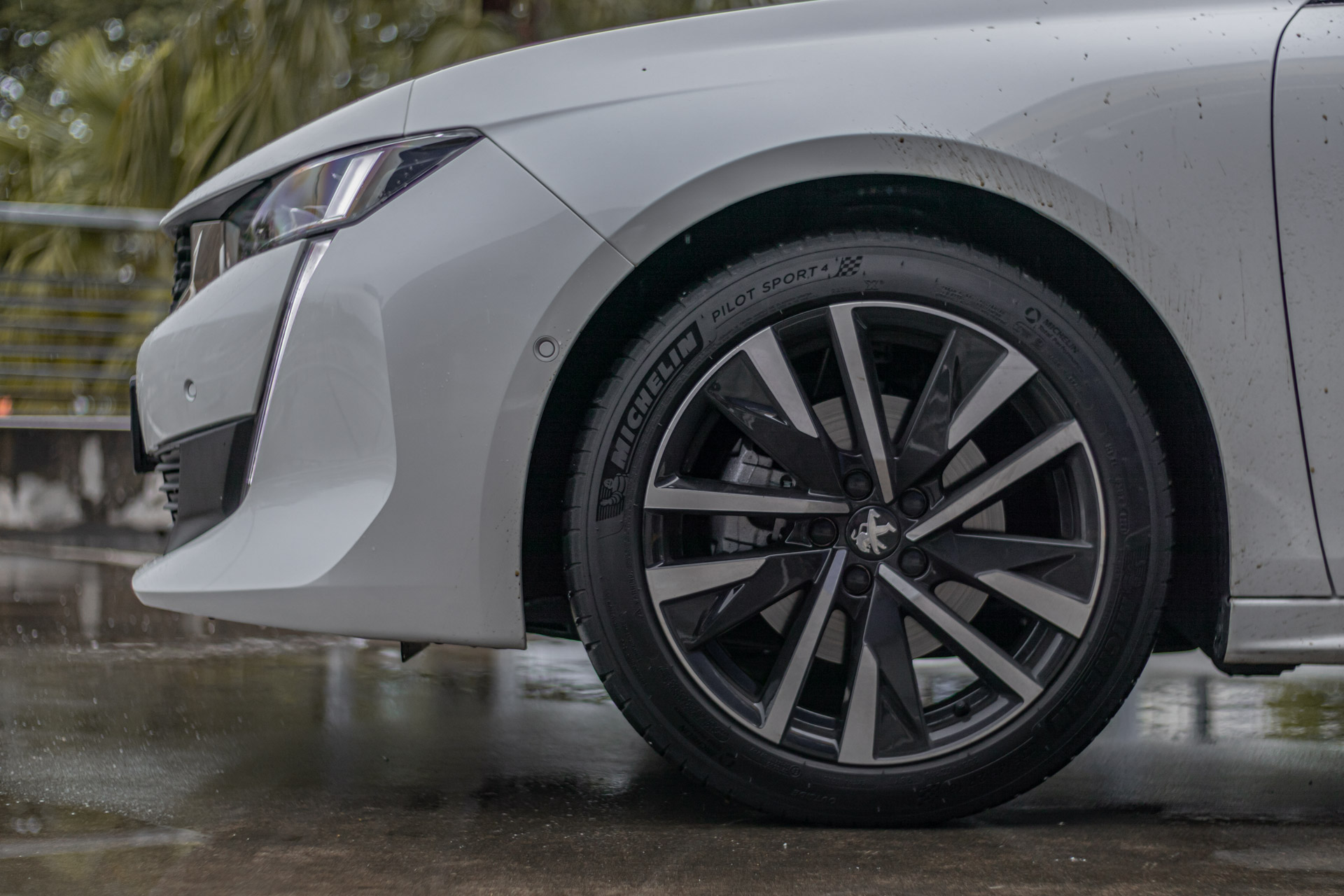 Despite its sporty aesthetics, the 508 is best driven as a cruiser and not an all-out performance machine. The comfort-oriented suspension soaks up bumps easily, but is rather soft and springy around corners, which leads to evident body roll. Peugeot has been generous with the rubber, equipping the car with a set of sticky Michelin PS4 235/45/R18 tyres.

The eight-speed EAT8 torque converter 'box from Aisin is similarly designed for a leisurely drive. When pushed hard, we noticed that it was confused during gear changes, especially from first to second. 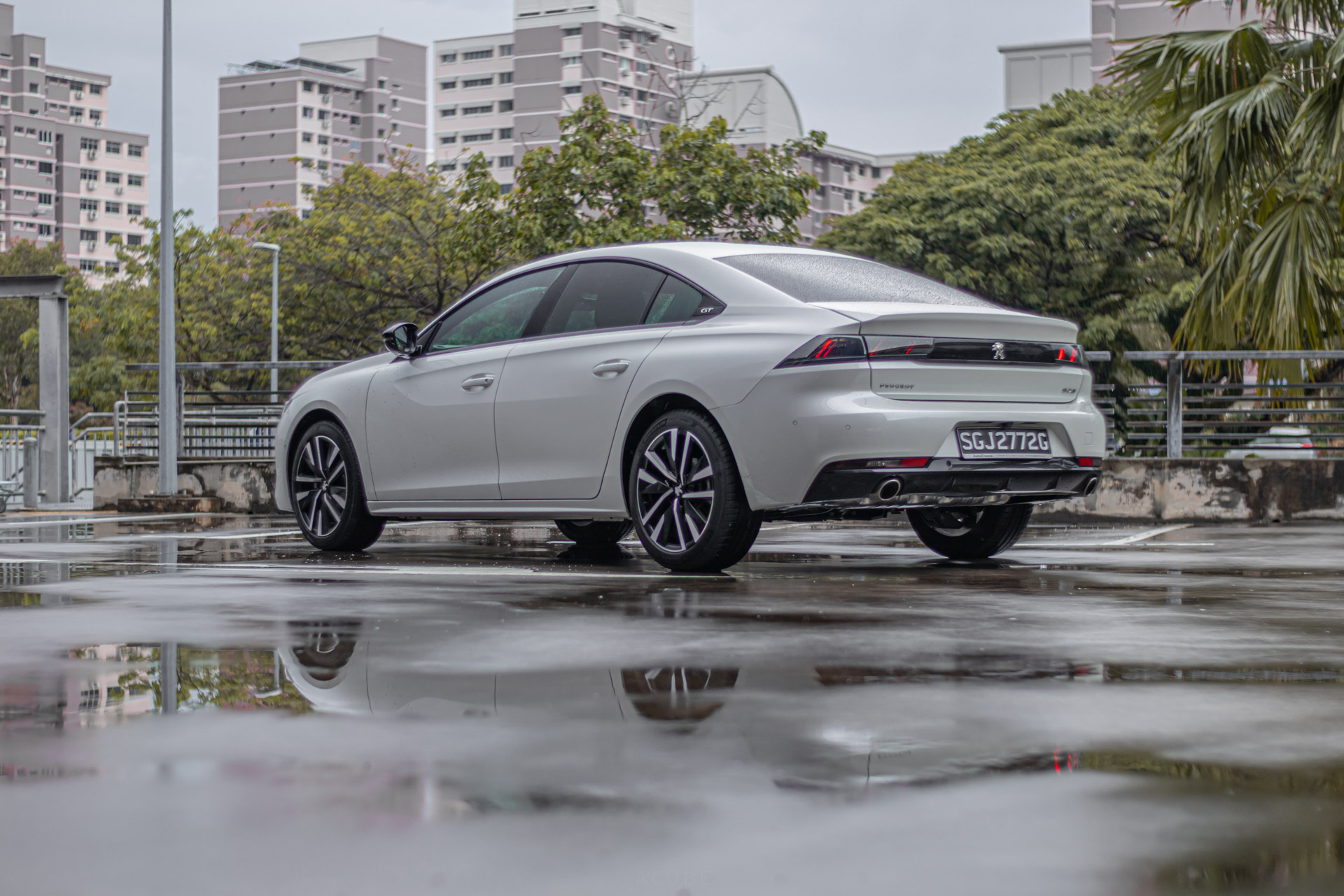 Fuel economy is impressive, however. After several days of driving, we clocked about 17 km/l, which is just a hair's length away from the official figures.

Safety is top-notch too ,with the 508 scoring the full five-star rating for Euro NCAP. Apart from six airbags as standard, it also features a suite of active safety features, such as blind spot monitoring, forward collision warning, lane departure warning, and adaptive cruise control. 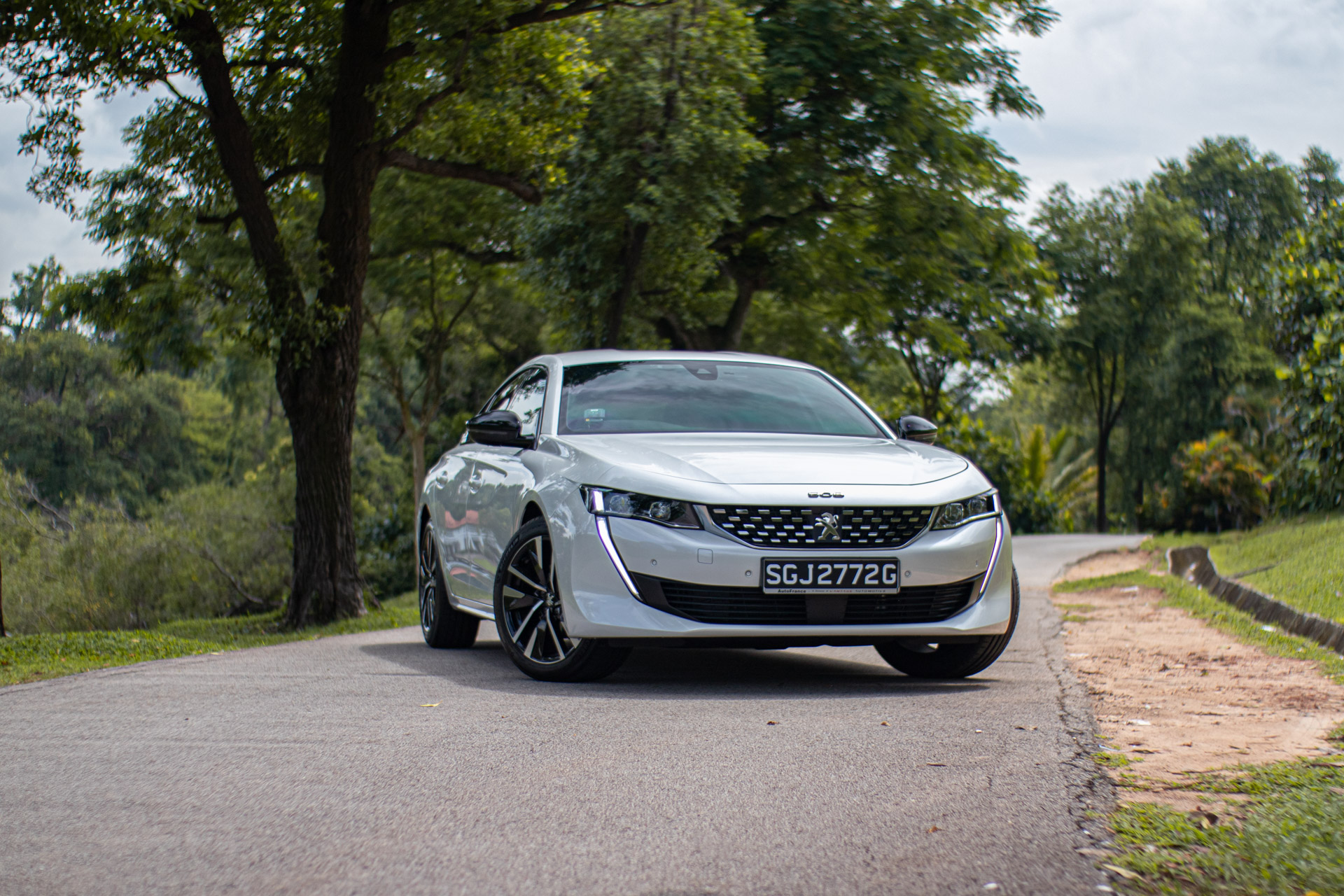 This is a much-needed refresh to the Peugeot line, and a welcome return to its sportier roots. The 508 fastback is not only technologically advanced, it's also well-packaged and a great value for money. And while we do have our reservations about certain elements, like the polarising i-Cockpit design, the 508 is objectively an appealing car that deserves your attention and consideration.

Make no mistake; the excitement and flair that's usually associated with Peugeot's golden years have returned, and the 508 is definitive proof of that.