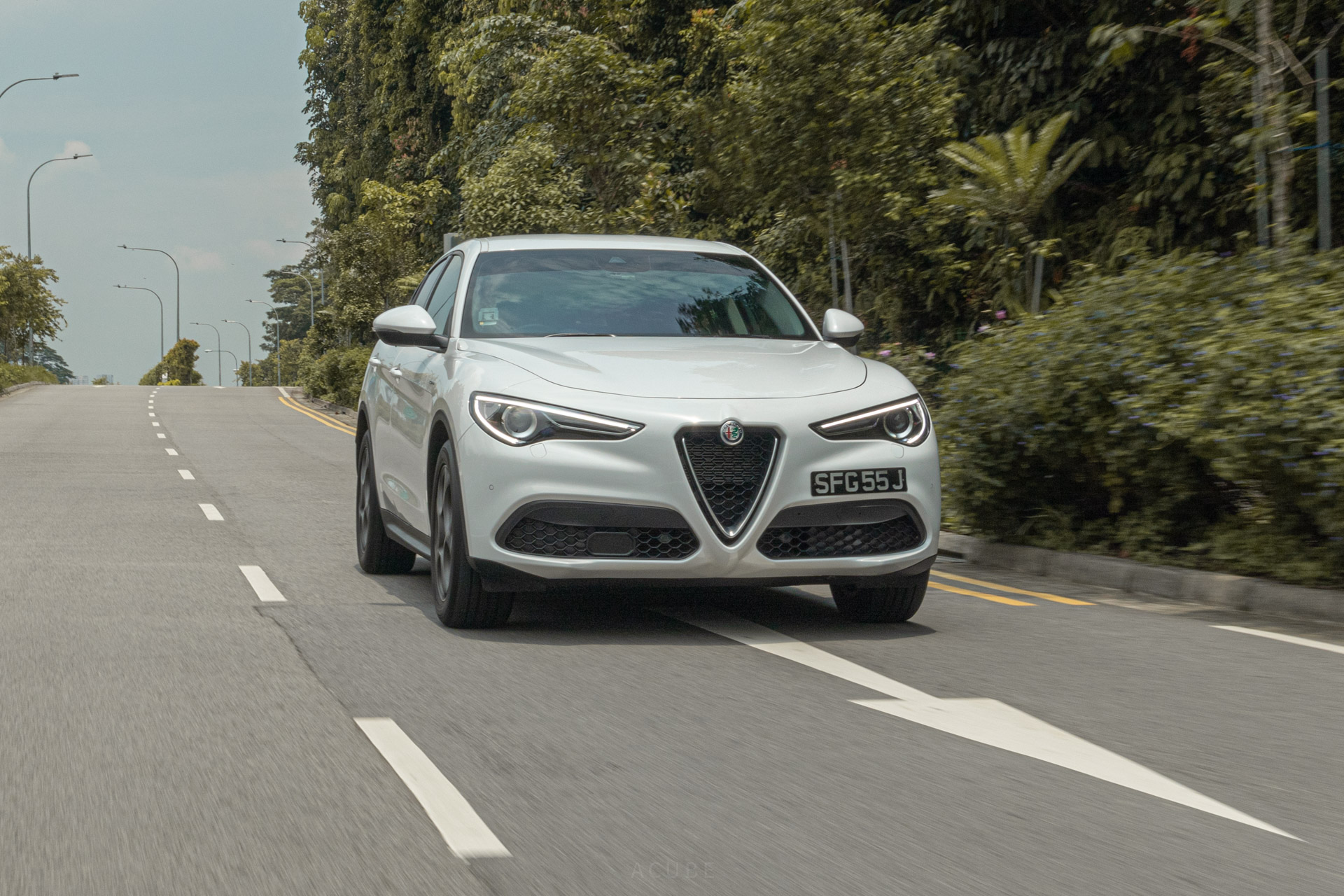 It is an established fact that Alfa Romeo designs some of the most beautiful cars in the business. But what happens when the company sets out to create its first ever SUV?

Now, I can already hear the collective groaning from some of you about how auto journalists love to harp on about Italian flair and tasteful design and what-have-you, but hear me out on this. Many automakers have attempted to design truly radical SUVs over the years, to varying degrees of success.

The Stelvio belongs to the select few that have succeeded in transplanting unique visual elements of the automaker to an offroader shell without looking like a hack job. It is, after all, based on its Giulia saloon sibling. With curves and details that call back to Alfa Romeo’s rich motorsports heritage, the Stelvio certainly breaks the mold on how a crossover should look.

Looks to Die For 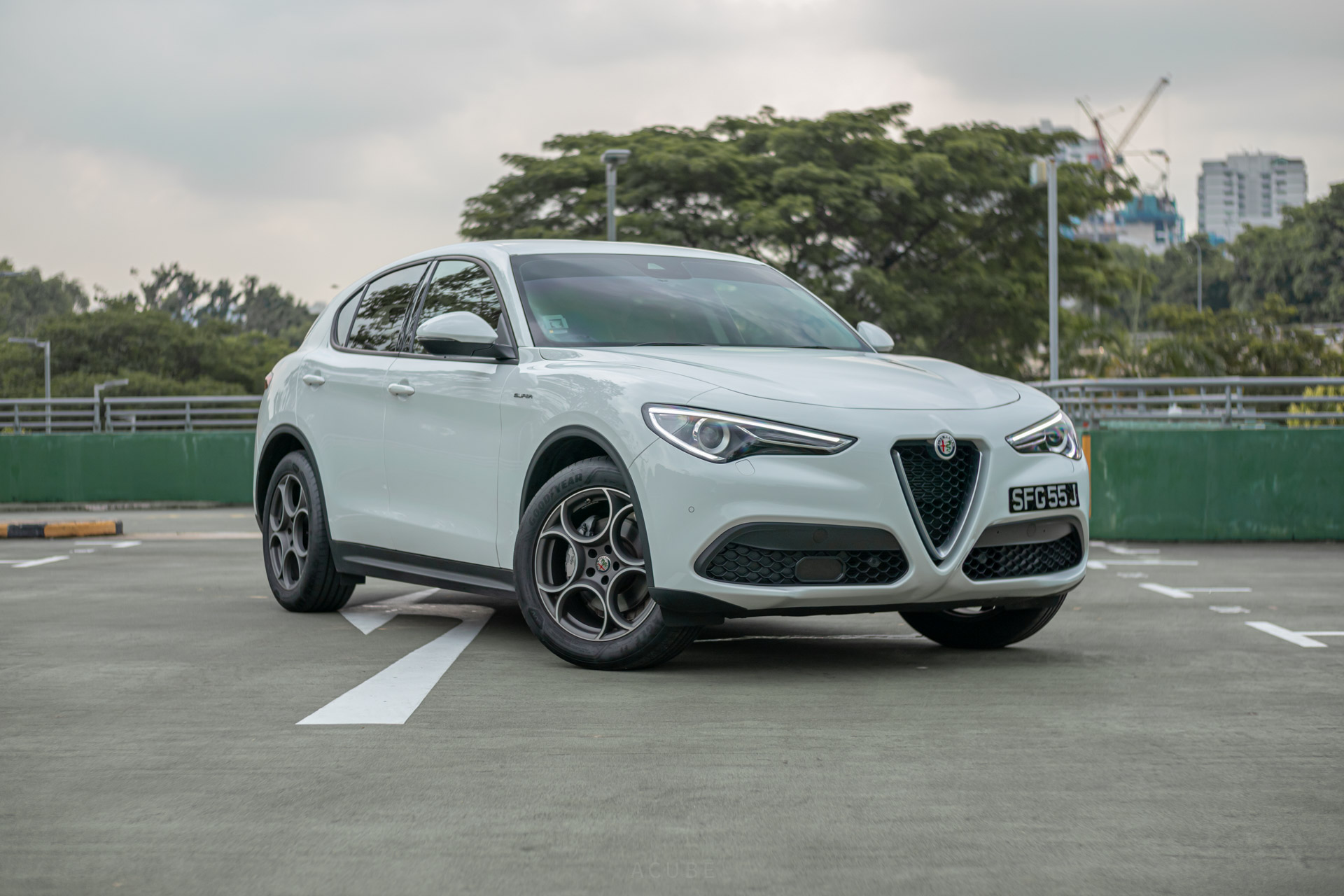 It comes in three distinct flavours: the Super, the Veloce, and the flagship Quadrifoglio. And even in its base "Super" guise here, the Stelvio demands your attention with its sleek sheet metal. It's no wonder that Alfa Romeo have named it after Italy's highest mountain pass, which provides breathtakingly spectacular views.

Looking right at home on the Stelvio is the trefoil three-element front grille, which is flanked by muscular front fenders, sleek bi-xenon headlights and LED daytime running lamps. Look hard enough and you can spot an intercooler seated right behind the delta-shaped centre shield, hinting at the Stelvio's turbocharged powerplant. 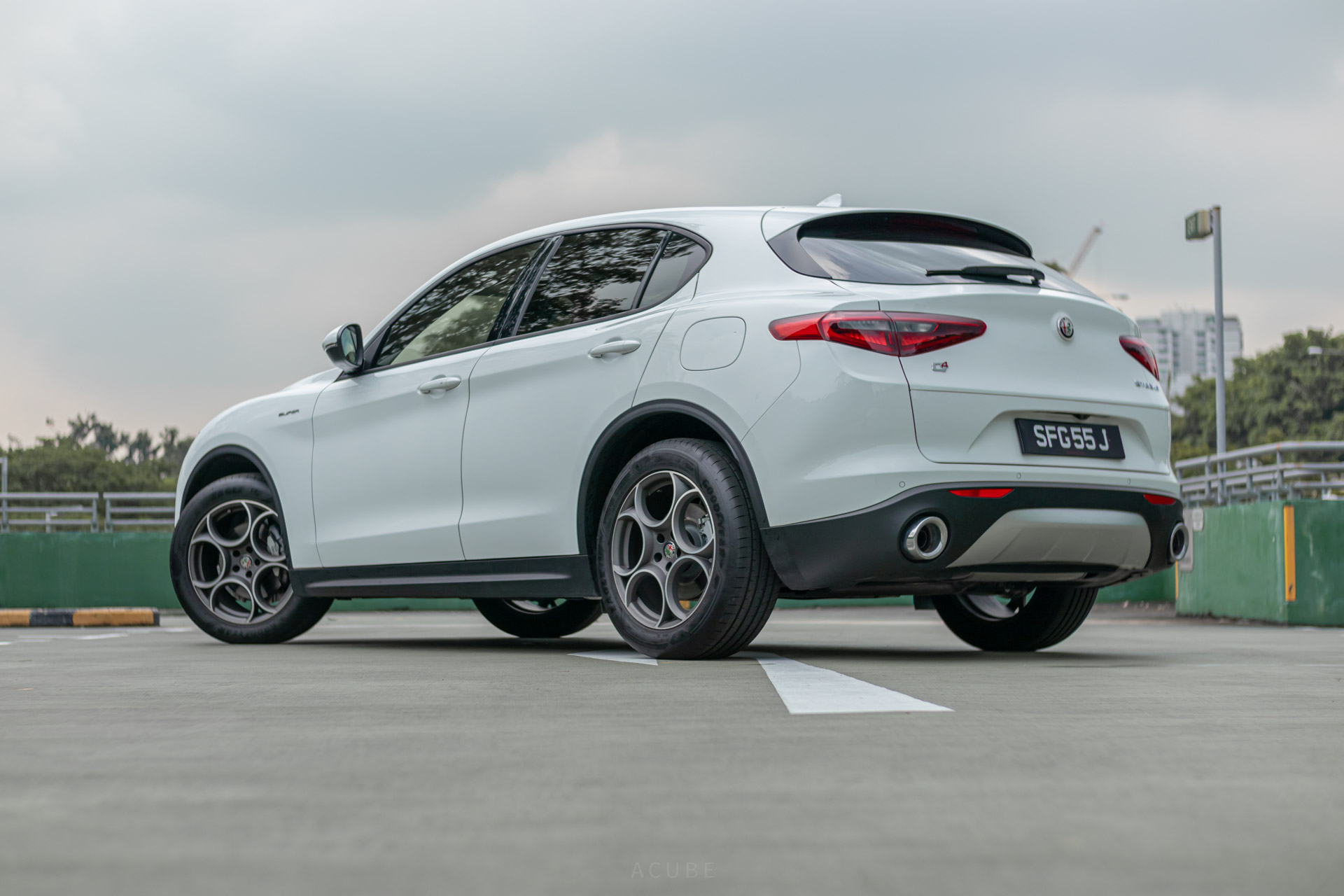 Alfa Romeo's good design is not limited to just the front end. The Stelvio's rear fascia is also devoid of clutter and rather elegant, complemented by a set of chrome-tipped twin exhaust pipes. One niggle that I do have is the rear overhang, which is a tad too long and looks ungainly from certain angles.

The five-hole 19" wheels are unmistakably Alfa, wrapped around in meaty 235/55/R19 Goodyear Eagle F1 tyres. As far as first impressions go from a visual standpoint, the Stelvio gets full marks in my book. 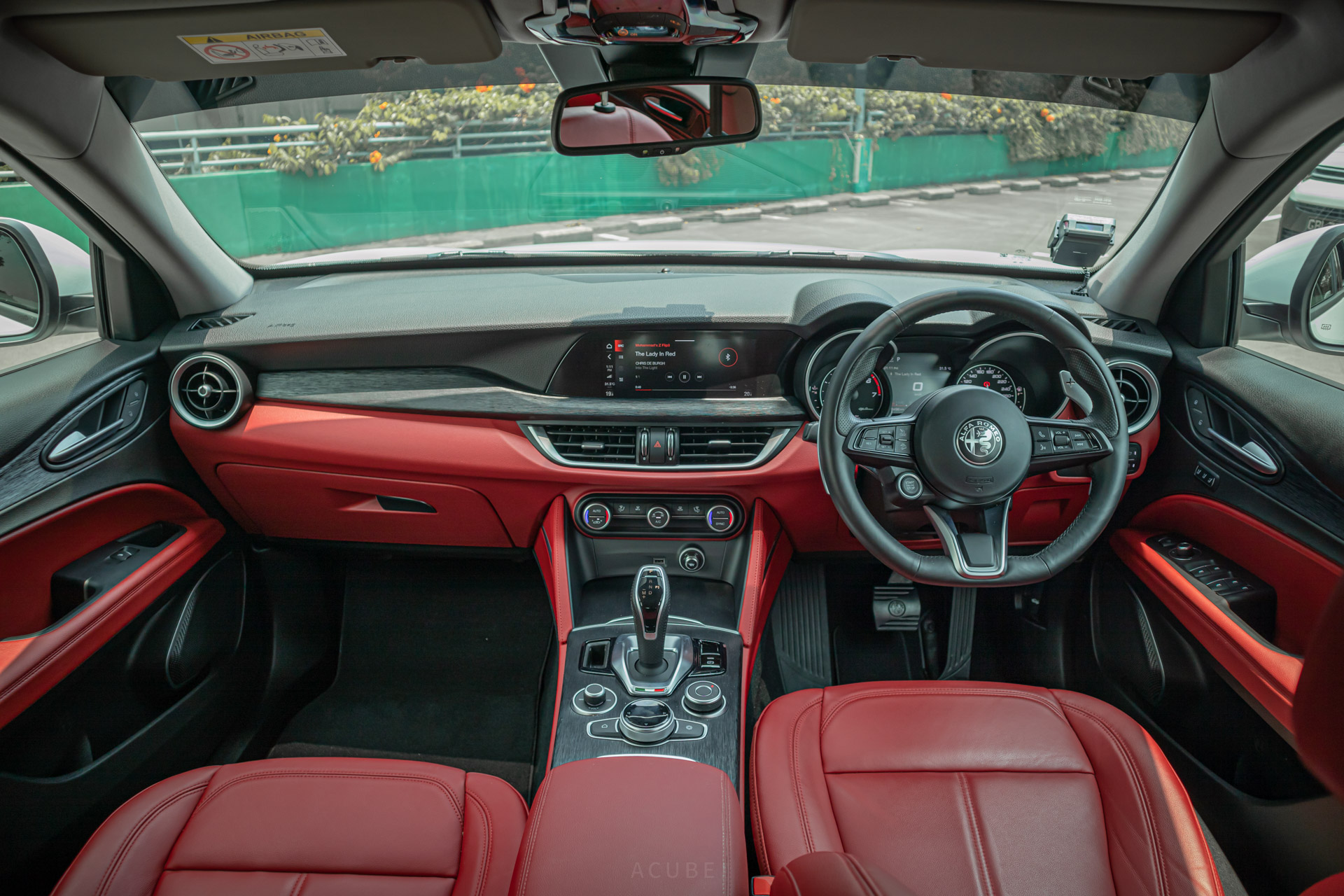 Stepping inside, you are once again reminded of just how design-oriented the Italians are. The striking red Nappa leather upholstery certainly pops against the grey-and-black cabin, especially the textured trim that covers the dashboard, door cards, and centre console.

The 8.8" multi-touch display take a bit of getting used to, but thankfully it's not littered with sub-menu after sub-menu. Plus, it's fairly responsive and has a crisp resolution. There, you have access to a plethora of vehicle information and connectivity options on tap, customisable to your needs via widgets.

There is admittedly further room for improvement in terms of overall build quality. During my time with the Stelvio, the abovementioned dashboard trim creaked when some pressure was applied, and some side panels were found to be loose with some prodding. 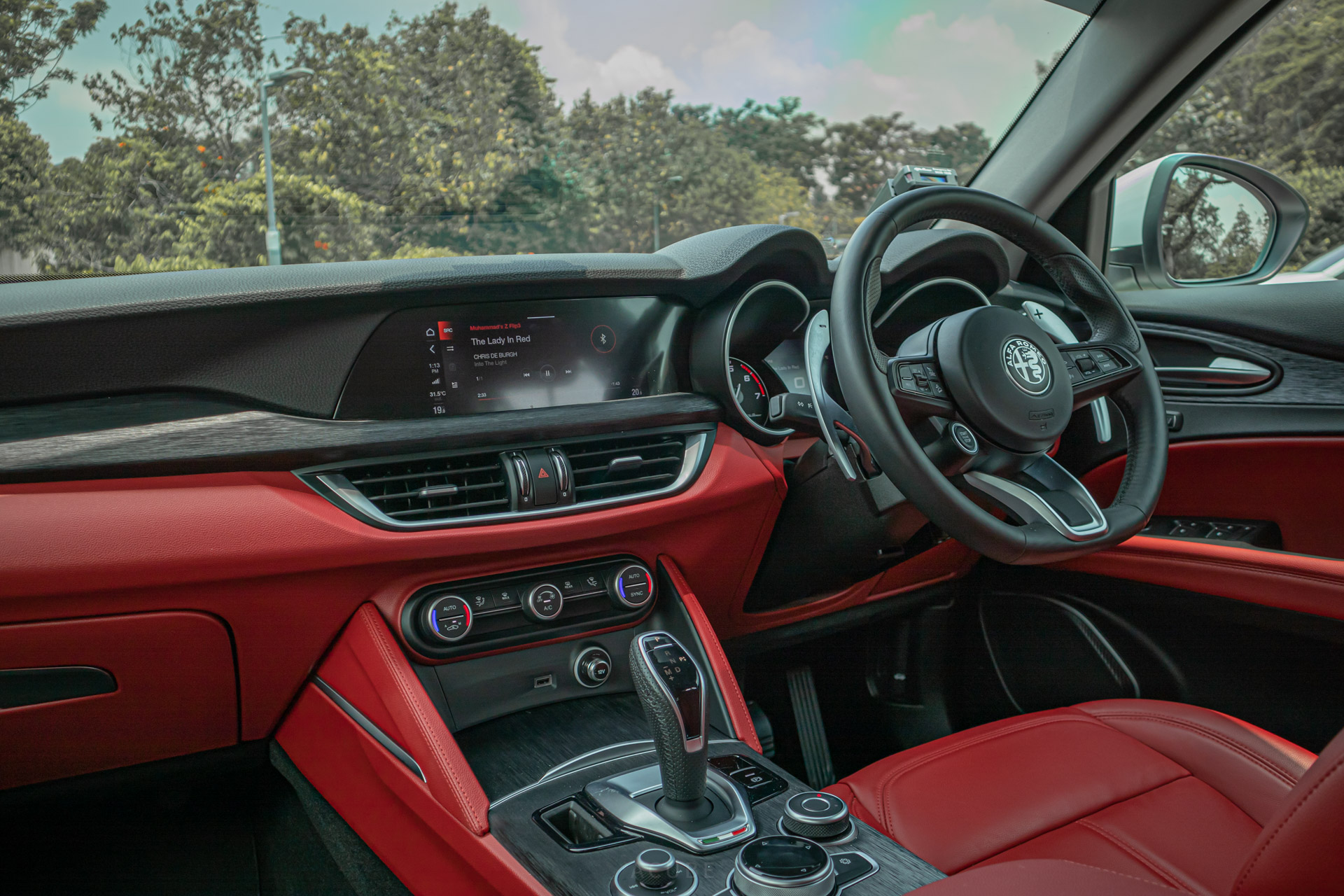 I'm happy to report that Alfa Romeo has not given in to the dreaded touchscreen trend for essential features, and instead doubled down on keeping physical dials and buttons. All the controls for the HVAC system, for example, are within easy reach and logically laid out. The Stelvio comes with a wireless charging pad, a single USB port up front, and a 12V power socket.

The aluminium paddle shifters, which are mated to an eight-speed ZF automatic transmission, are equally satisfying to operate. Every pull generates a reassuring click, quickly followed up by an almost-instantaneous shift in cogs. More on its driving dynamics in a bit.

The six-way adjustable electric-powered seats are quite plush (as you'd expect for a car costing almost $300k), which means you will not be getting any back pain even on extended drives. The front headrests, embossed with the Alfa Romeo crest, are also supremely supple. 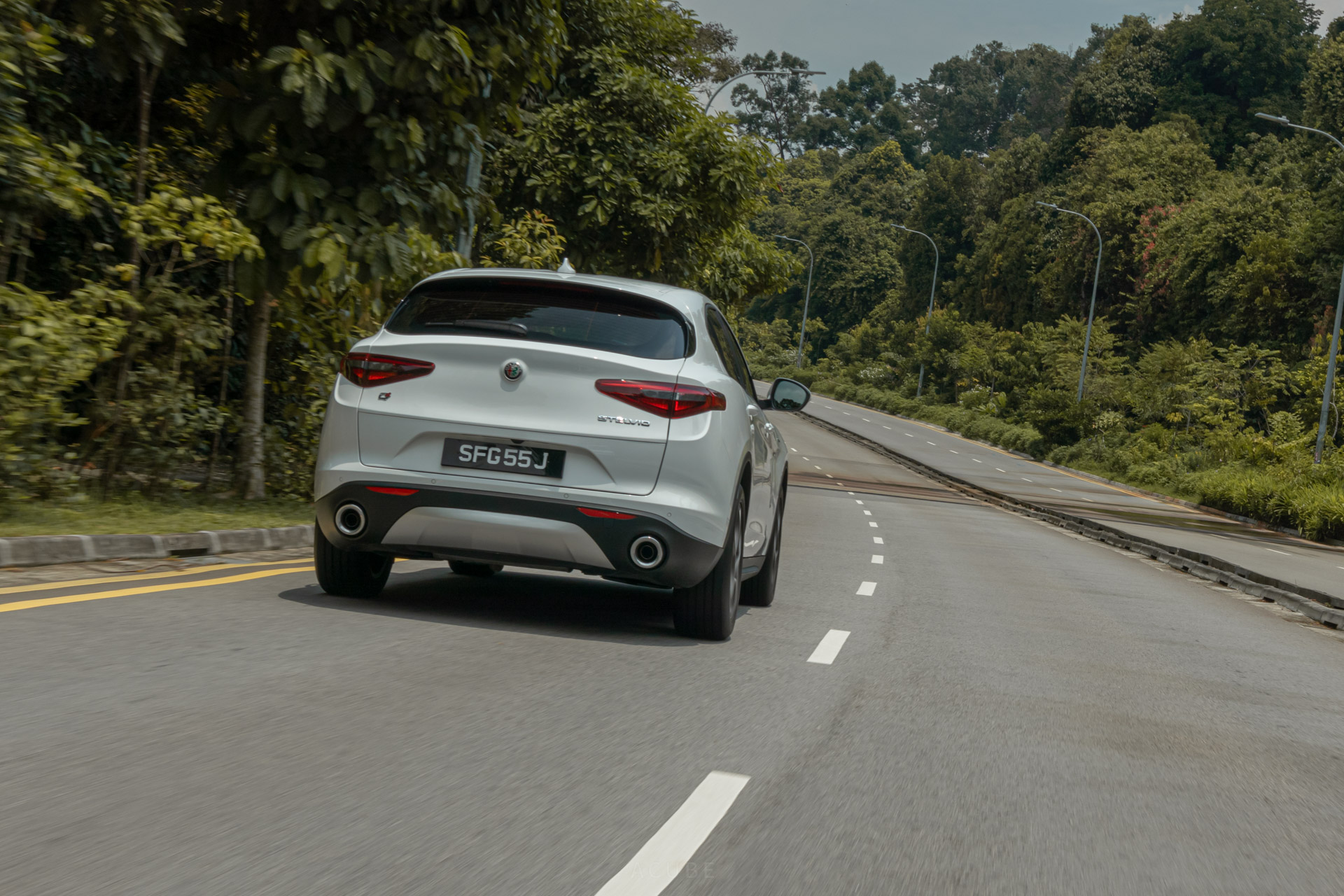 The rear cabin is quite spacious as well, with more than adequate room for two full-sized adult passengers such as myself, measuring at 1.75 metres. The middle seat is best left unoccupied though, due to the transmission tunnel hump on the floor. AC blowers are provided, along with two USB ports for your devices. The headrests are unusually stiff, however, which I quickly found to be uncomfortable after a short while. 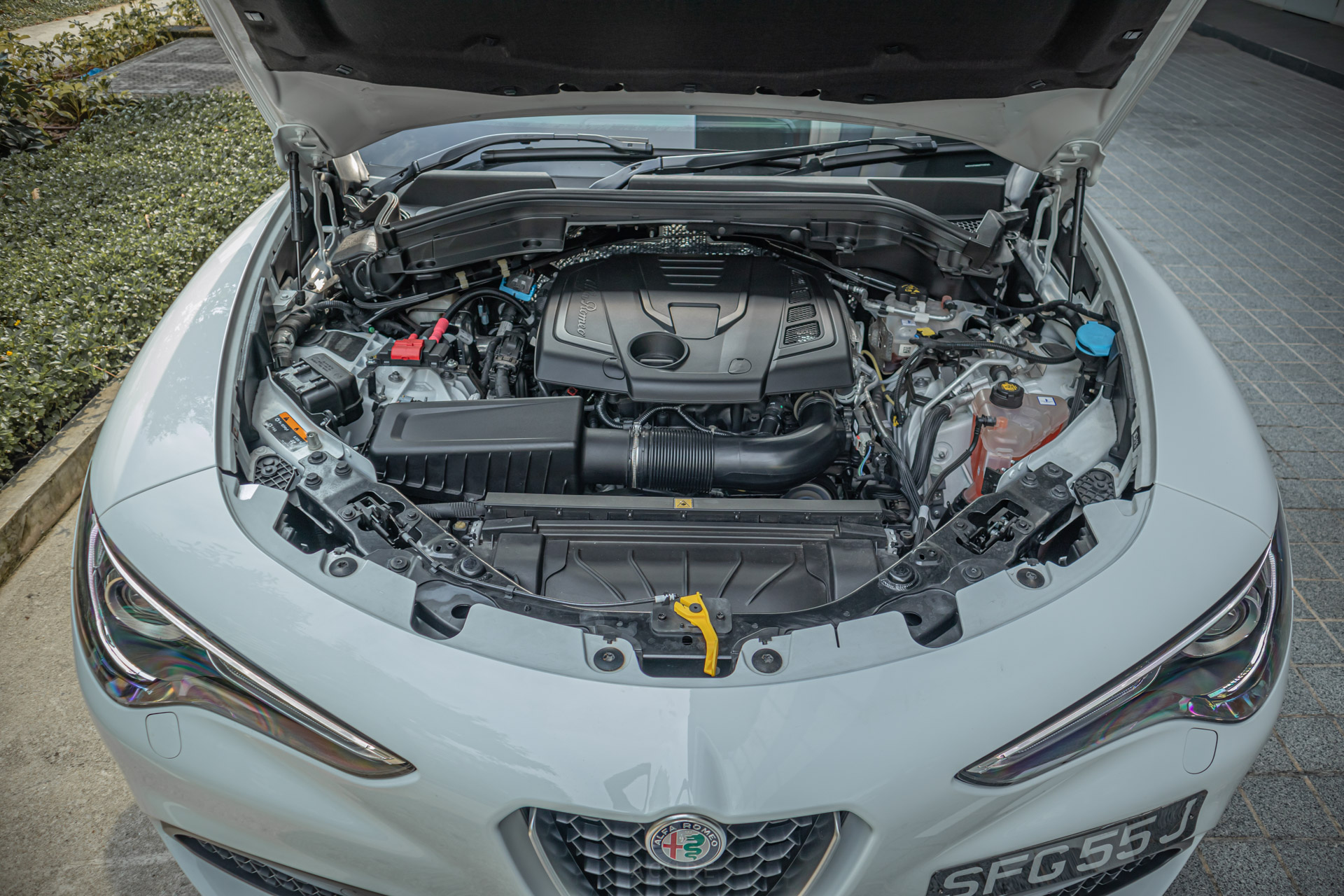 While the Stelvio Super is not a fire-breathing Italian stallion by any stretch of the imagination, it is no slouch either. The test car I drove is powered by a 2.0-litre turbocharged inline-four engine, making about 200 horsepower and 330Nm of torque. Overtaking maneuvers were a breeze during my time with it, and I found myself reaching almost LTA-unfriendly speeds very quickly.

Drivetrain-wise, the Stelvio is equipped with Alfa Romeo's Q4 AWD system, which is rear-wheel-drive biased on most driving conditions. The Alfa is remarkably composed even when taking on corners and bends in a spirited manner, thanks to the Giulia-based Giorgio platform. Body roll is minimal, but turn in hard enough, and the Stelvio makes its 1,660 kg kerb weight and tall body known. 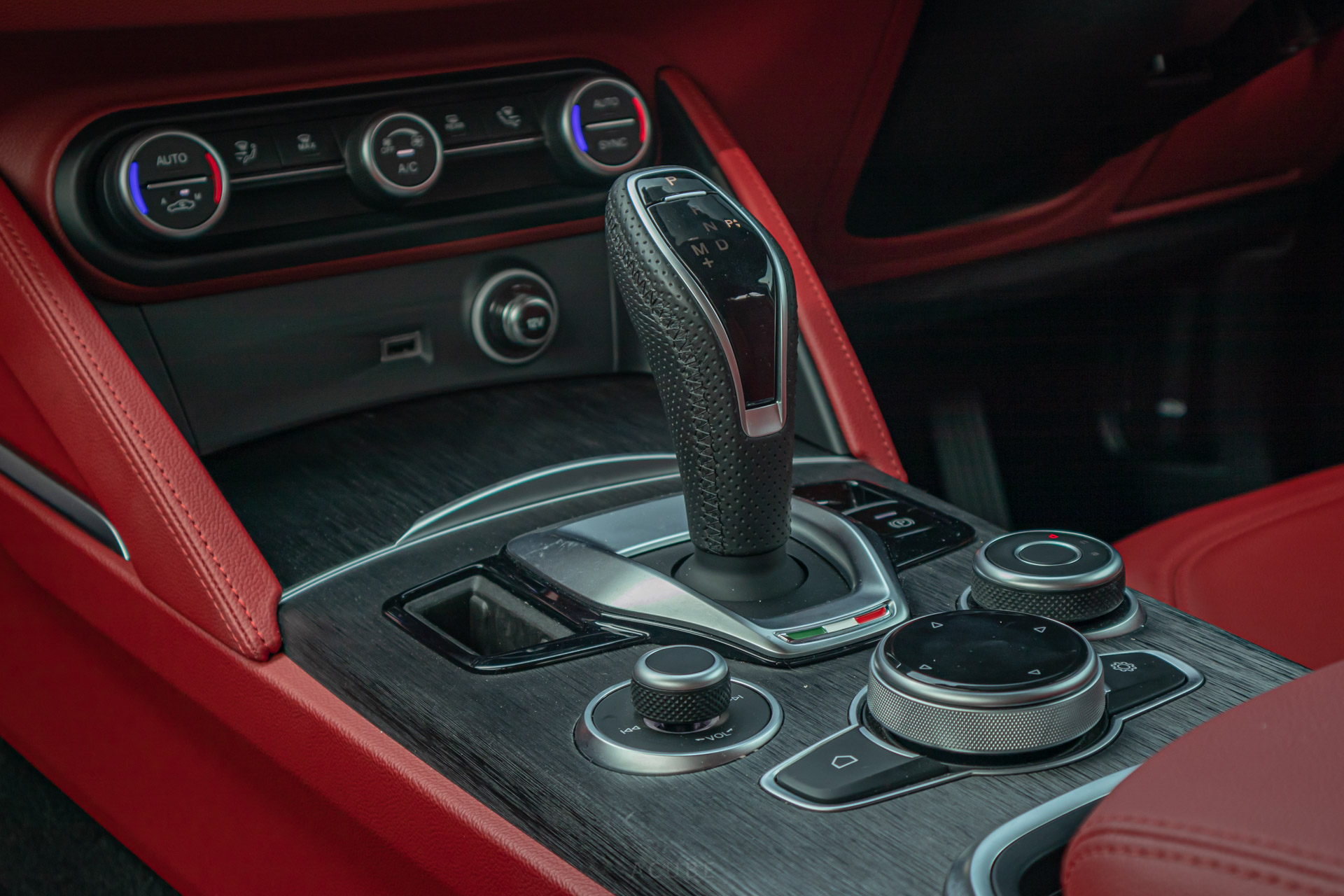 The DNA Drive Selector dial lets you select between three options: Dynamic, Normal, and Advanced Efficiency. If you are looking for a comfortable and fuss-free driving experience around town, leave it at N and allow the soft suspension damper settings to soak up the various road bumps with ease. As someone who relishes in some spice, I prefer the full-on Dynamic setting, where various settings like throttle response and gear shifts are sharpened, and the dampers are stiffened up. 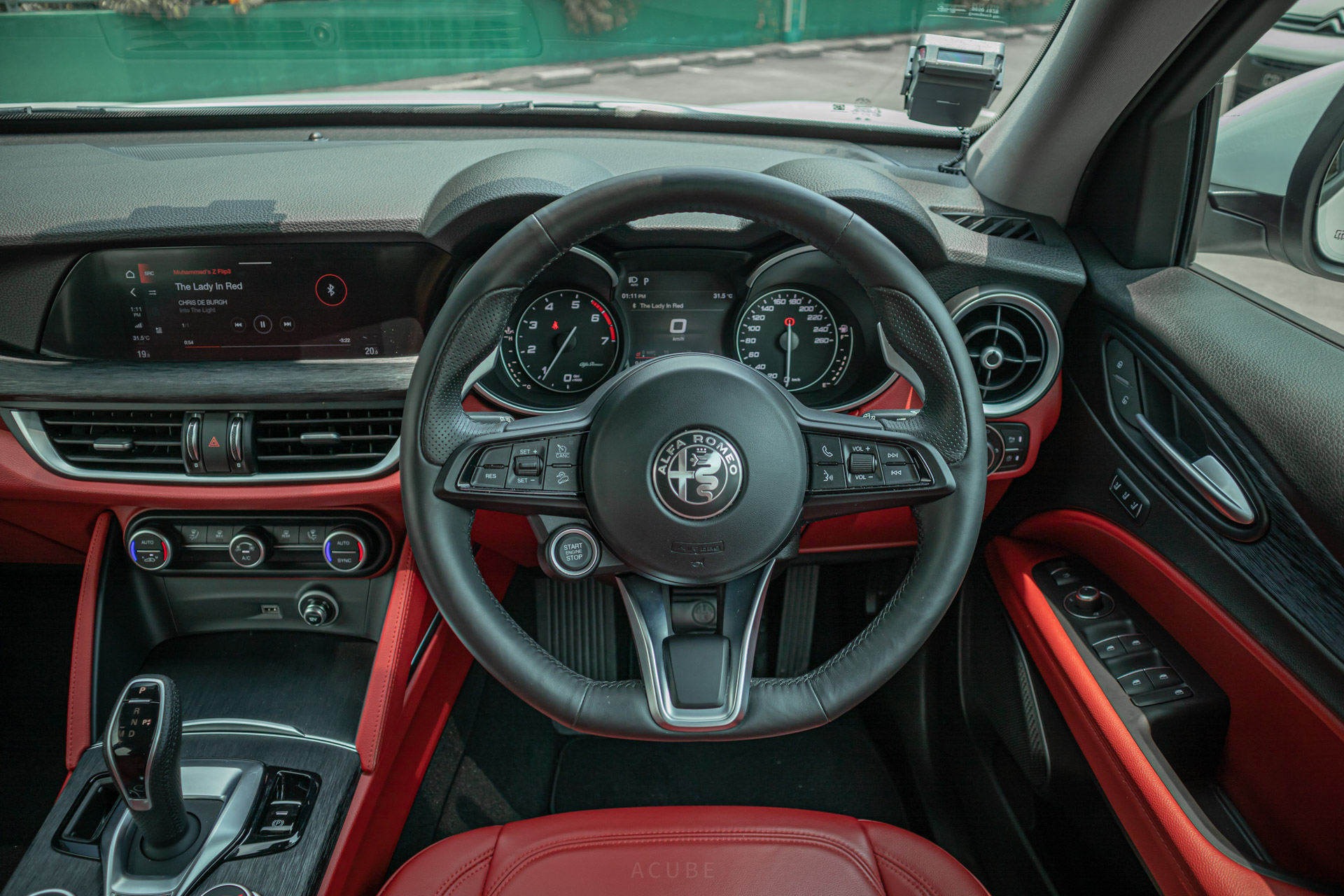 Steering response on the Stelvio is also quite sharp and direct, which is refreshing for an SUV. Not once did I feel like I was losing control of the vehicle, partially thanks to its grippy leather-wrapped steering wheel. Its agile and confidence-inspiring nature, coupled with a driver-centric cockpit, makes for a rather fulfilling driving experience.

There is no option to disable the stability control, unfortunately. So if you're looking to give the Stelvio the beans without any interference from the electronic nannies, the Super is not the variant for you. 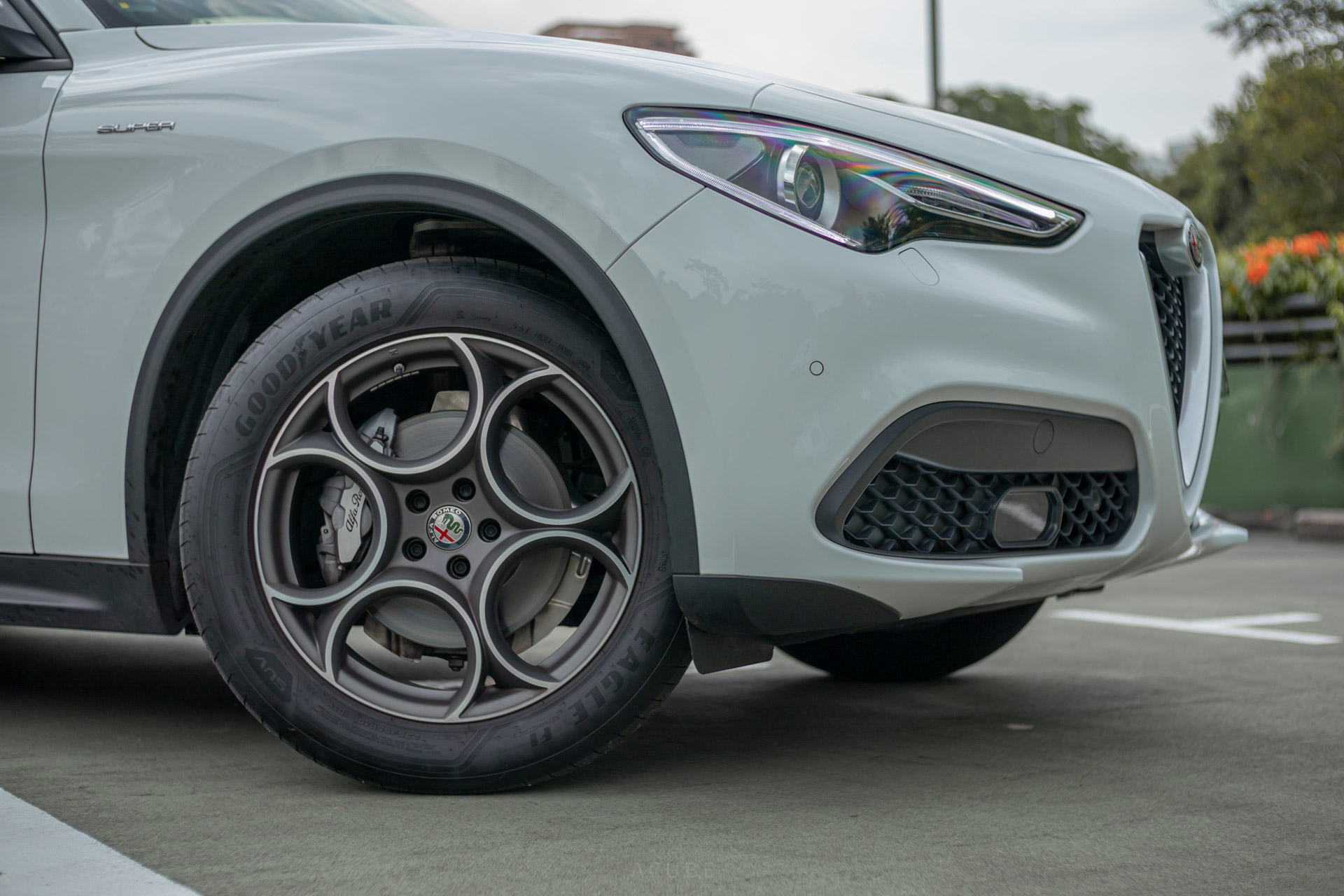 Speaking of safety, the Stelvio is chock-full of active safety features. Functionalities such as lane departure warning, automatic emergency braking, and forward collision warning all come as standard across the entire model range. It is also equipped with six airbags, and scores five stars in the Euro NCAP safety assessment, the maximum that a car can get. 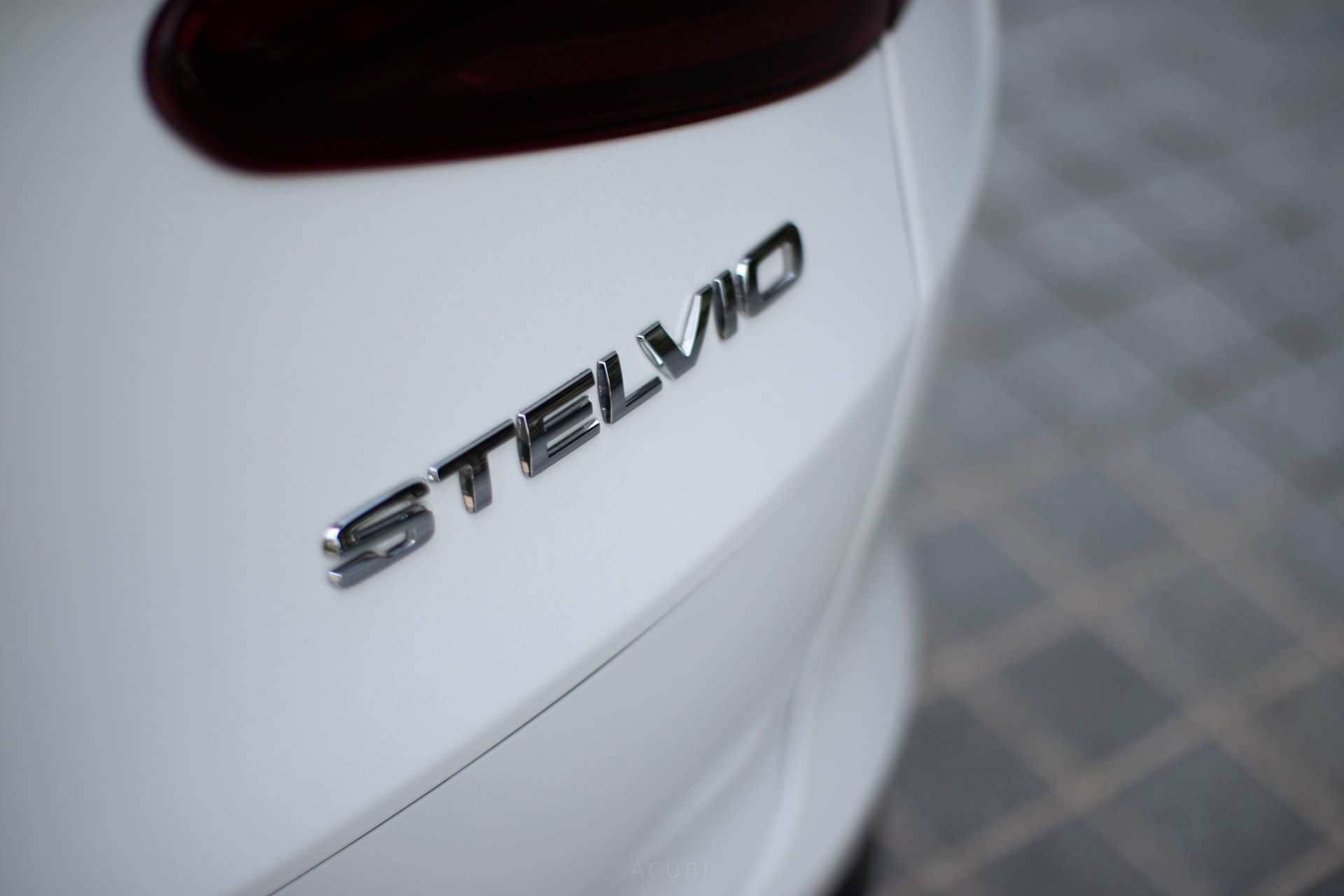 For a hefty SUV with a high-revving powerplant and an AWD system, the Stelvio is surprisingly frugal. I managed approximately 12km/l, which is quite close to the official figure (14.3km/l). And with a cavernous boot that is capable of storing up to 525 litres' worth of barang-barang, it is also just as practical as many of its competitors out there. 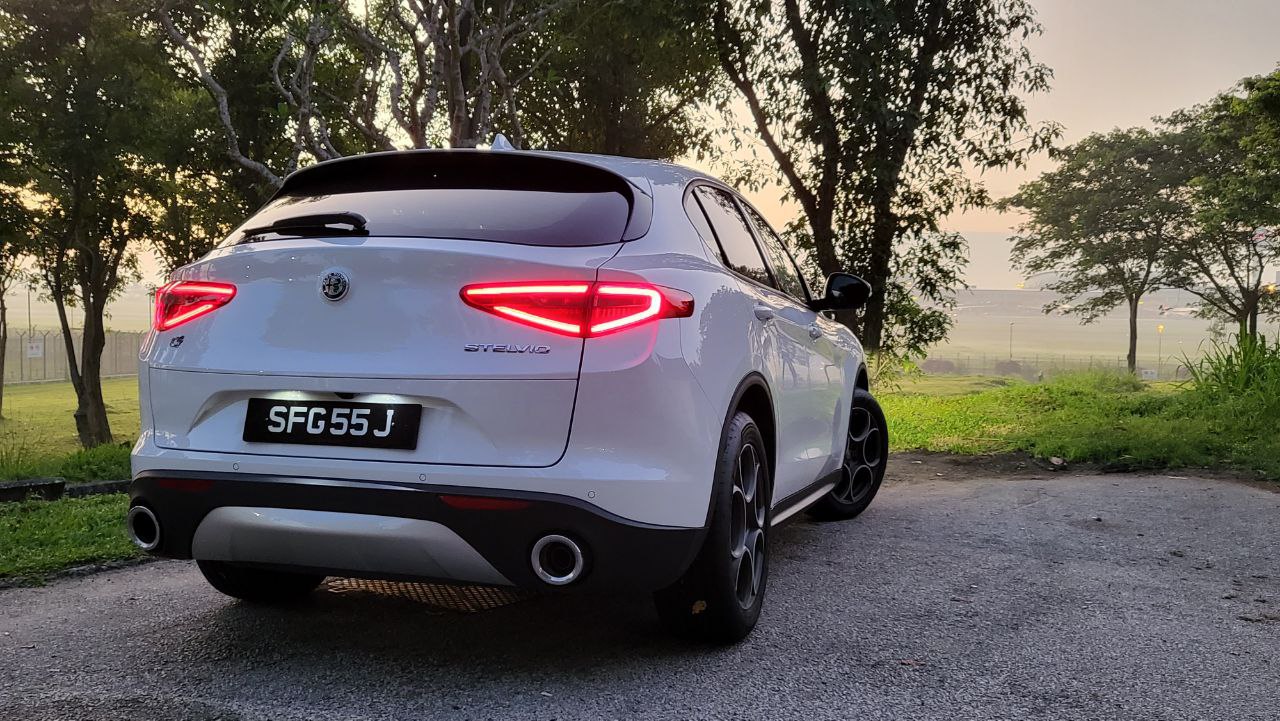 At S$278,000, the Alfa Romeo Stelvio Super faces some stiff competition from the Germans, Japanese, and Swedes. Some of them even have the upper hand in terms of VES, where the Stelvio earns a C1 banding, meaning there's a S$15,000 surcharge should you purchase this.

But let's face it. You do not buy an Alfa Romeo because you want to be pragmatic. You buy one because you appreciate true beauty and elegance, and desire to set yourself apart from the endless sea of dull-looking machines on our roads. And if you are willing to pay for it, the Stelvio can provide that for you in spades.

Read More: How SUVs Have Evolved to Stay Relevant