[Infographic] The Biggest Complaints that Singaporean Drivers Have While Driving 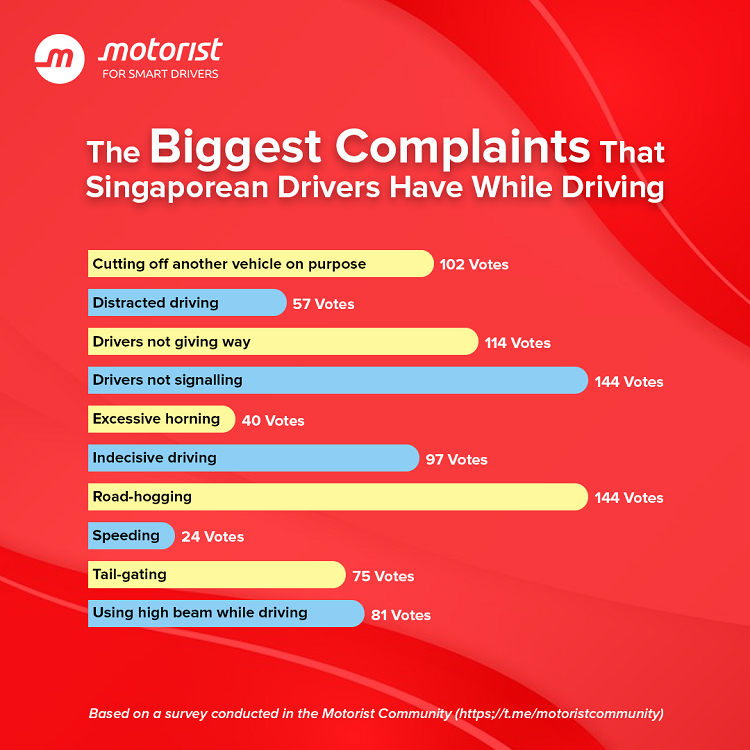 Here are the biggest complaints that Singapore drivers have on the road. This survey was conducted on the Motorist Telegram Community.

Signalling is a driver's only form of communication on the road. Failing to do so can endanger the lives of other road users, especially if one is planning to switch lanes. Understandably, most drivers will react angrily when someone cuts into their lane abruptly without using their signals. The penalties for not signalling include a $70 fine for light vehicles and a $100 fine for heavy vehicles.

Road hogging is the act of obstructing another vehicle moving at a faster speed, thus affecting the flow of traffic. This happens quite frequently on the extreme right lane of expressways, which should be used for overtaking. For those unaware, road hogging is also a punishable offence according to LTA. Offenders can be fined a maximum of $1,000 and/or 3 months jail, with 4 demerit points for first-time offenders.

Have you ever had a driver speed up after you have signalled your intention to switch lanes? Not only does this make driving unpleasant, but it could lead to road rage, which has seen a rise in cases recently. If a driver fails to let you switch lanes, just take a deep breath and wait for the next opportunity to switch lanes.

4) Cutting off Another Vehicle on Purpose (102 votes)

Reckless driving? Road rage? The reason doesn't really matter as cutting off another vehicle on purpose is a dangerous act, and can cause the victim to swerve their vehicle to avoid a collision. If you are on the receiving end of this dangerous act, remember to stay away from the driver and avoid reciprocating any actions as it might cause the situation to esculate. The high beam of a car is meant to be used to convey danger or when driving in heavy rain. However, there are instances where the wrong use of it can cause displeasure amongst fellow drivers. Such instances include using it to convey anger, or leaving it on whilst driving. The latter can be dangerous as it might distract or blind the driver of the car in front.

Another irk that drivers constantly face is tail-gating. This occurs when a car drives to close to the car in front without leaving sufficient space to brake safely. If you happen to chance across a chain collision on the highway, it probably is due to tail-gating. There are several reasons why drivers tail-gate. It could be due to impatience, over confidence in ones driving, road rage, or reluctance to let others cut in front of them. Regardless of the reason, it is a dangerous act that should not be mimicked.

Distracted driving comes in many forms and is one of the leading causes for road accidents in Singapore. In most cases, it involves using one's mobile device or GPS system while driving behind the wheel. Driving is considered a fast and complex task, requiring the driver to process information quickly from multiple channels. When a driver is distracted, their reaction time will lessen, which could lead to devastating consequences.

Nothing is more irritable than a car horn going off for longer than three seconds. One would normally experience this when there is a hold-up in a one lane road or if a car fails to move off at a green light. Although it can be used to convey danger or to alert fellow drivers, more often than not, it is used to show frustration. Remember, excessive horning will not solve any problems. Instead, it will just increase the frustration of everyone on the road.

Speeding is the number one cause of road accidents and has claimed more lives than drink driving in 2020. It is also Singapore's number one traffic offence, according to CNA. To be honest, we were surprised that speeding was so far down the list. Perhaps most drivers don't experience it regularly on their daily commute. However, it should not be taken lightly considering how packed our roads are.

What are your thoughts on these driving complaints? Are there any other acts that should be included in our infographic? Let us know in the comments below!