Inconsiderate Drivers of the Week: Episode 14 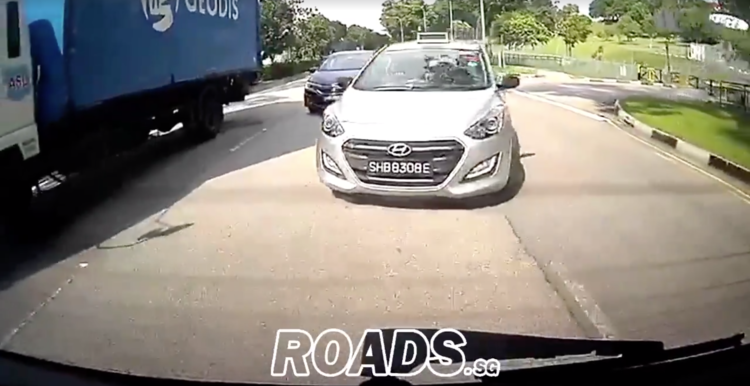 
In episode 14 of our Inconsiderate Drivers of the Week compilation, we feature several road bullies and a cab driver not checking for traffic before opening his door.

It’s pretty obvious why drivers should not play the braking game and swerve between lanes to purposely block other drivers. It’s reckless and it poses a danger to themselves and other drivers on the road.

The video shows a Silvercab driver purposely blocking a black car behind. Not only was the cabby playing the braking game, but whenever the black car tried to change lanes, the cabby also swerved to block the black car. Luckily, no one was injured from this reckless act.

It is unclear what happened before this incident was captured on-camera. But STOMP has since confirmed with Premier Taxi, the company renting out Silvercabs, that “there had been an altercation between the parties which triggered our driver to behave in an unruly manner”. Netizens were also quick to call out the cabby for his reckless act on the road. Premier Taxi also said that the cabby in the video has since resigned.

When opening your car door on the road, it is imperative that you check your surroundings for traffic before opening. That is to ensure the safety of yourself and other road users.

Prior to the incident captured on camera, there seemed to be an incident on an expressway involving a taxi. That would probably explain why the taxi driver would even stop to get out of his vehicle in the middle of an expressway.

3) Mazda Driver Turns Without Signalling and Clips a Foodpanda Motorcyclist


Indicators are placed on our cars for a reason. They are for us to inform other motorists of our intentions. Our mirrors are also used in tandem with our indicators, to check for approaching traffic before changing lanes or turning.

This Mazda attempted to make a right-turn into a set of HDB blocks on a small two-way street. Not only did he not signal, the driver also failed to spot the Foodpanda motorcyclist approaching. As he slowed down to turn right, he clipped the motorcyclist, who was trying to overtake the Mazda on the right.

From the video, it shows both the driver and motorcyclist share a part of the blame. For the motorcyclist, he should not be overtaking a car just after a zebra crossing, but if the driver signalled and stopped before turning, the accident could have been avoided.

As much as some drivers and cyclists hate to, everyone needs to share the road for everyone’s safety. Cars should give way to cyclists, including giving them a 1.5 metre berth to pass safely.

From what we can see from the video, both the driver and cyclists share the blame. They were all on a single-lane, two-way road with sections of double white lines in the middle. It is highly unadvisable for cyclists to cycle on such roads, as it can be extremely difficult for vehicles to overtake them safely.

Cyclists in a group should cycle in a single file line on the left side of the road. Under such road conditions, cyclists should slow down or even stop to allow cars to pass them safely. This is to avoid road-hogging and prevent a slow-moving queue of vehicles forming up behind the cyclists. On their part, drivers need to take every precaution possible so as to not endanger the lives of cyclists, and they must never use their vehicles to intimidate them on the road.


As mentioned earlier, drivers should take every precaution before overtaking cyclists. At the same time, a group of cyclists should cycle in a single file lane so as to not hold up traffic.

In the video, it shows a group of at least four cyclists, with one of them attached with a camera, cycling on the road. In a junction, a black Toyota signals and overtakes the cyclists from the right to turn left at the next junction. After overtaking and filtering into the turning-left only lane, the driver slows down to have an argument with the cyclists who were going straight.

From what we can see, the cyclists were cycling in a two-by-two formation, taking up the whole left lane. Depending on the size of the group, the driver had two options, follow the group of cyclists at the back, or drive in front of them.

In the first place, the cyclist shouldn’t have been in a two-by-two formation on the road, as they would be taking up the whole lane. Thus, traffic behind them might slow down, and some drivers, like the Toyota driver, might choose to overtake the group. Such an act is quite dangerous, and drivers need to exercise every precaution before overtaking in such a manner.

But if the cyclists were in a single file, such an action would have been unnecessary. Drivers need to take every precaution so as to not endanger the lives of cyclists. But cyclists need to do their part too, after all, drivers do not owe cyclists their lives. Raj
how do you deal with road bullies?
Like Reply