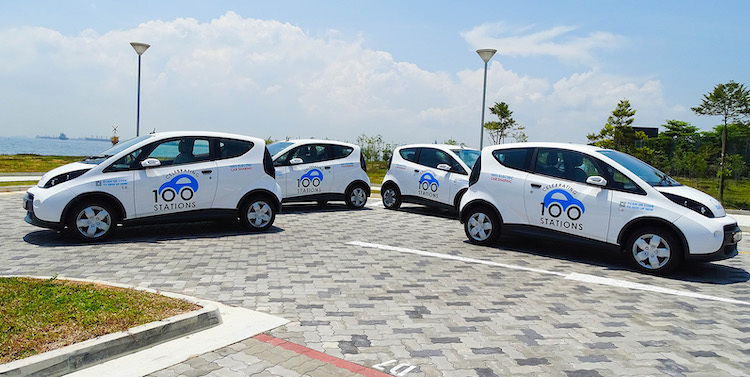 
Having just opened their 100th charging station, BlueSG looks to cement its position in Singapore as a viable alternative to owning a car.

The concept of car-sharing is nothing new to this world. Over in Europe, people have been using shared cars for years to get around town quickly, effectively and easily. It is branded as an alternative to owning a car and taking a taxi or ride-hailing service.

Over in Singapore, BlueSG is regarded more as an alternative to having your own car. As it involves driving a car yourself and a driving licence, it is in deeper competition with car ownership and car rental firms than taking a Grab, for example. 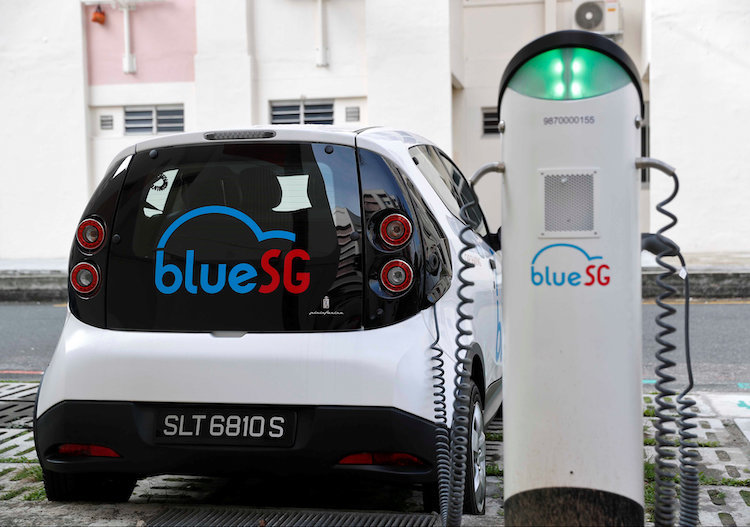 BlueSG is part of a car-sharing service in Paris, which recently shut down in the French Capital, called the Bolloré Group. The cars they use are small two door hatchbacks which BlueSG claims can sit four adults and have a range of 250km on a full charge. The back seats can be folded down to accommodate bigger loads in the boot, and it also has a latch to secure a young child.

To use the service, members must be 21-years-old and over, hold an ASEAN driving licence and have a credit or debit card. In terms of cost, members only need to choose between two memberships to sign up for and pay-per-use for the car. There are no other costs involved in a mishap-free trip.

Each trip should be at least 15 minutes long. If a trip is shorter than that, members will still pay for a 15-minutes trip. Members can drive the BlueSG car anywhere accessible by car in Singapore. The BlueSG cars, however, cannot clear immigration to enter Malaysia, and they must start and end their trip at a designated BlueSG charging station. 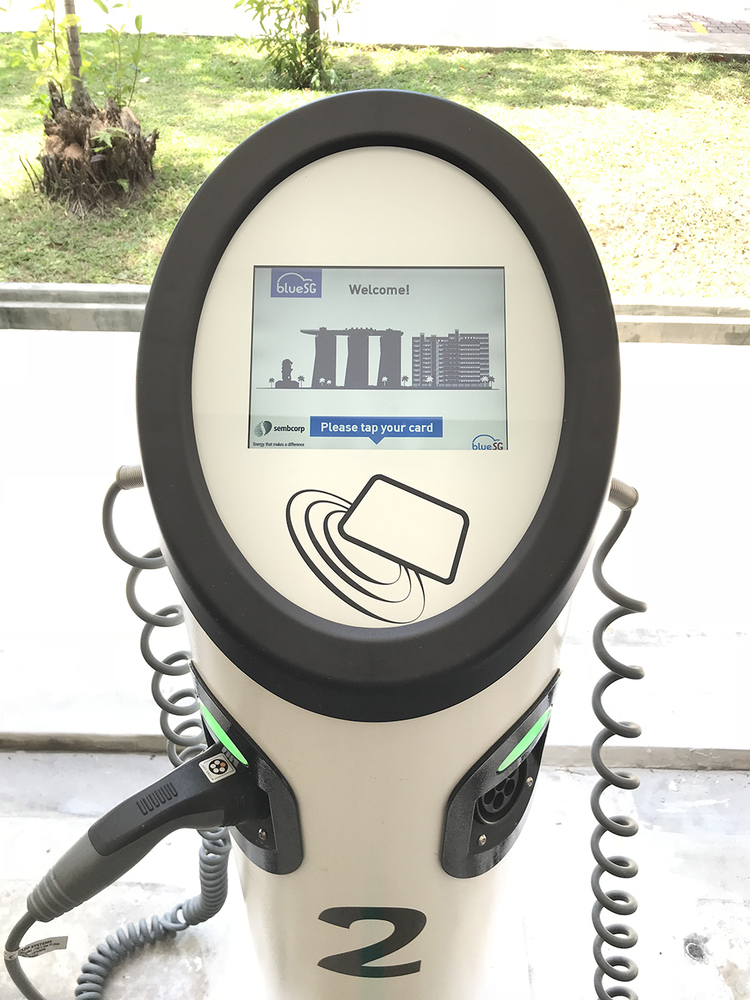 To start a trip, you have to go on the BlueSG mobile application, look for an available car and book it. Upon reaching the charging station where the BlueSG car is parked, tap your card on the charging machine. To unlock the car, tap your card at the card reader with the blinking light on the driver side of the car.

You can then unplug the charging port and check the interior and exterior of the car for damages before driving off. To lock the car mid-trip, just tap your card on the reader in the car. You can also reserve your return charging point space in advance. The rental of the car ends when you plug it into the charging point.

As you can see, the charging points are quite evenly spread out in Singapore, with even Sentosa having one station. We believe that BlueSG is trying to have as many charging points needed to make their service accessible via foot from anywhere in Singapore for their members.

However, in certain residential towns like Simei and Bedok, there are only two charging stations each, serving the whole neighbourhood. That would mean a short bus trip to a charging station for a large portion of residents in that town. Such limitations on the location of charging stations might be a deal breaker for people to sign up for the service.

BlueSG is trying to remedy the situation by accepting recommendations from people on where they should build charging points. Currently, they have received 6,000 recommendations and are constantly reviewing them.

In a press release on the BlueSG website, BlueSG managing director Franck Vitté said in a statement, “As we committed at our launch in December 2017, we continue our fast deployment to be available to all Singapore residents. With 100 stations, in almost every town islandwide, BlueSG is a convenient and competitive commuting option in complement of the existing public transport network”.

He added that, “More importantly, BlueSG is becoming a viable alternative to car ownership and some of our users have already started selling off their private vehicles. Moving forward, this will contribute to car-lite Singapore for the benefit of the environment”. 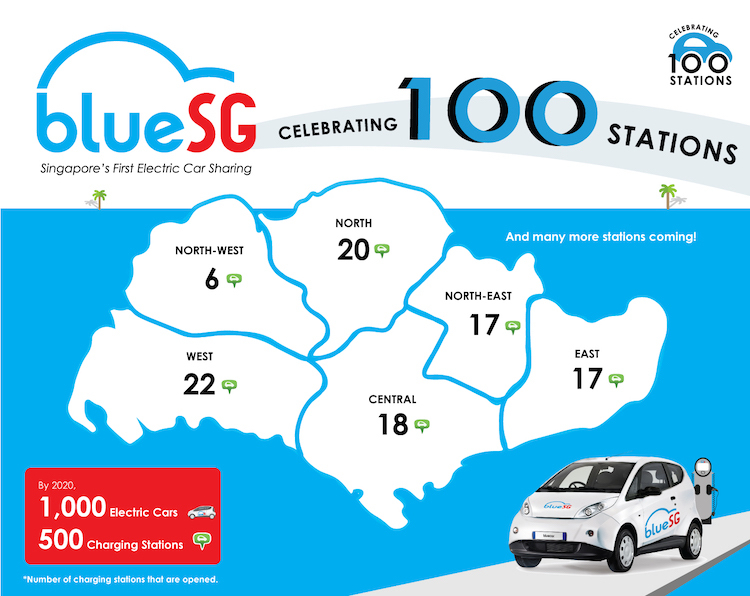 BlueSG looks to the near future with big plans, with the electric car-sharing company planning to have 1,000 cars and 500 charging stations by 2020. That’s quadrupling its fleet of cars and having 5 times more charging points in just over two short years. That’s a big aim from a company that has yet to celebrate its one-year anniversary.

Since its inception, BlueSG has been successfully renting out on-demand electric cars to people who have wanted to drive a relatively cheap car for short periods each time.

With the company charging by time used, not distance travelled and number of stops, it is also a viable alternative to ride-hailing services like Grab, which not only charge by distance and time, but also number of stops made, if any. Therefore, BlueSG does fill a small, specific gap in the market between public transport and using point-to-point service providers. 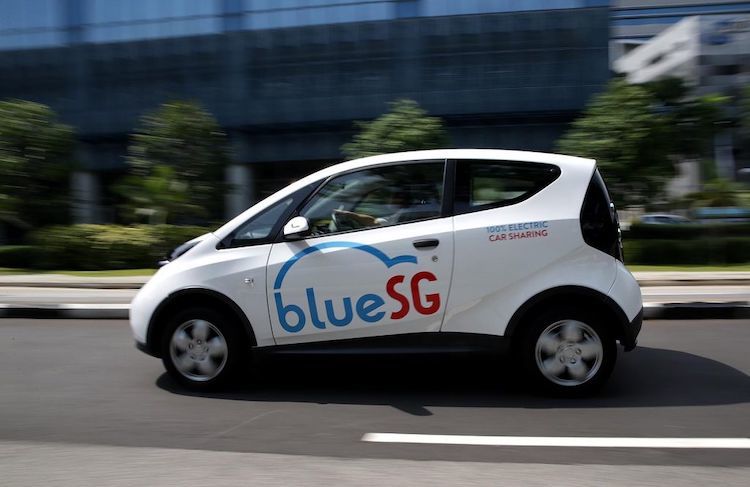 But should you need a car for all-day travelling, you are better off renting a proper car. BlueSG can be expensive if rented for a few hours, a three-hour rental under the weekly plan will cost you $90, which is around the same price as a day’s rental of a proper car (sans petrol).

In terms of BlueSG “becoming a viable alternative to car ownership”, it still has a long way to go, with a limited number of cars and charging stations at the moment. Regardless, BlueSG is a concept that works in this small city which you can cross by car in an hour.

Singapore’s journey to an environmentally friendly, car-lite society will be a long and difficult one. But companies like BlueSG can help lessen the blow on the environment and for people who are heavily reliant on cars for their comfort and convenience.

For now, all we can do is watch BlueSG closely on their major expansion plans to see how useful and convenient Singaporeans find the service in the coming years. If they are successful, space might just open up in the electric car-sharing market for a second player to enter.

Siti Zahra
I stll prefer to have my own car :(
Like Reply