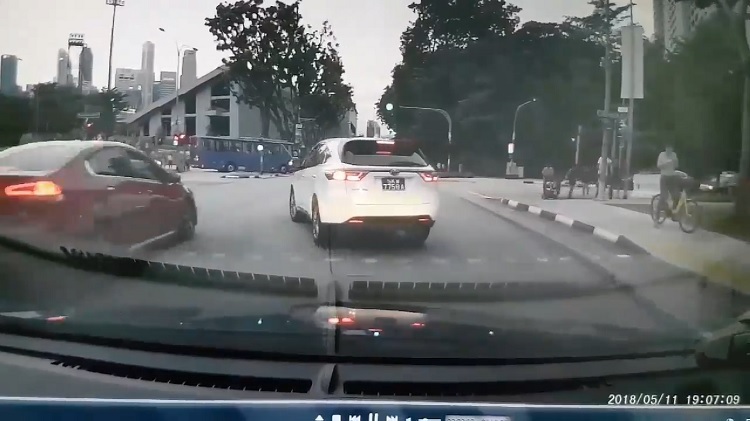 
These five drivers will definitely not receive commendations for their driving. Instead of being friendly road users, they inconvenience others with their inconsiderate and reckless driving.

In this new weekly feature, we'll be taking a look at five drivers who were caught on camera for their inconsiderate and reckless driving. These drivers exhibit poor driving etiquette, and we hope you never emulate their behaviour on the roads.

Not only did this Toyota Prius driver beat a red light, but he almost collided with several pedestrians at a crossing. Even after realising his mistake, he simply drove away without offering any form of apology. According to the Facebook post, the person who captured the video has made a police report against this reckless driver.

The driver of this dark blue Opel needs to take some refresher lessons on parking. While attempting to park his car, he brazenly reversed into a white Audi not once, but three times! What's worse, he simply drove off and failed to leave his details for the Audi owner. Luckily, his inconsiderate actions were caught on camera.

What’s with drivers and red lights? Not one but three different drivers were caught disobeying traffic light signals in this video. Luckily for them, the drivers who had the right of way did not move off immediately. Instead, they waited for them to pass before driving off. For shame!

4) Driver Cuts Across the Road to Make a Reckless Turn

This self-entitled driver literally cut across the entire road in order make a left turn. Initially straddling on a right-turn lane, he forced other vehicles to stop for him before attempting the turn. Seriously, how selfish can some people get?

Patience is a virtue, and it’s something that the driver of this white car lacks. While driving within a housing estate, he impatiently harassed a fellow motorist for driving slowly. Besides tailgating, he also sounded his horn several times to vent his frustration. Perhaps he had forgotten that there are young children and elderly folks who live there. Regardless, this kind of ill-mannered behaviour shouldn’t be tolerated.

The purpose of this compilation isn’t to shame or expose these drivers, but to learn from their mistakes. In all honesty, the driving culture in Singapore leaves a lot to be desired. We lack basic road courtesy and we don’t mind causing inconveniences to other road users. We sometimes even put their lives at risks with our careless and nonchalant driving.