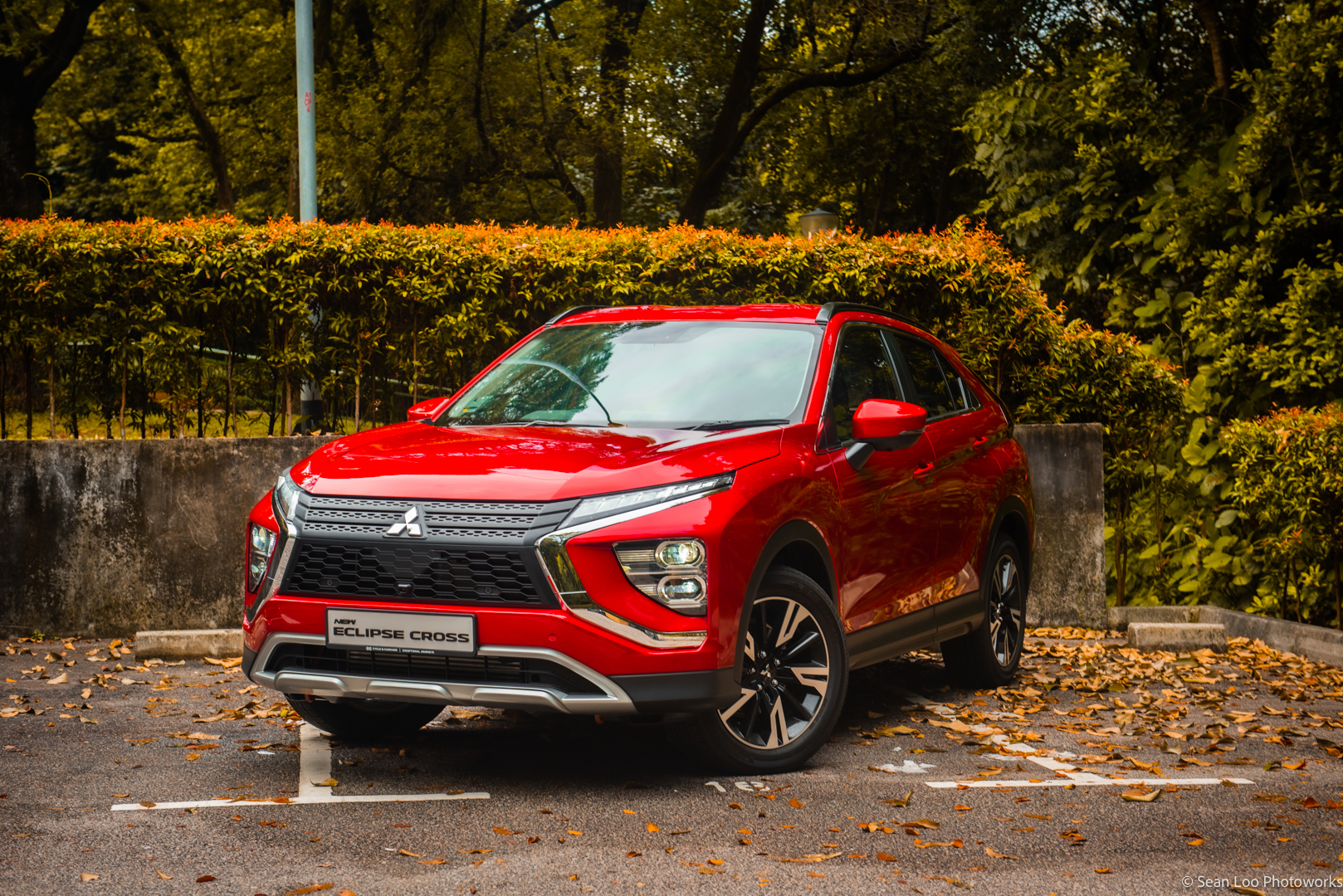 Most people won’t even bat an eyelid at the Eclipse Cross due to its questionable looks, but look beyond it and you’ll be pleasantly surprised.

Back in the good ol’ days where petrol was cheaper and tuning laws were less stringent, the “Eclipse” trademark used to belong to a compact sports car in Mitsubishi's lineup. However, this loveable model has since been discontinued and has not been in production since the early 2000s.

So, when Mitsubishi announced in 2018 that it was bringing this legendary nameplate back, petrolheads the world over were extremely excited and eagerly waited with bated breath.

Seems like nothing is immune to the ongoing SUV/Crossover wave, but how has Mitsubishi delivered on the Eclipse's revival?

Either you like its looks, or you absolutely hate it 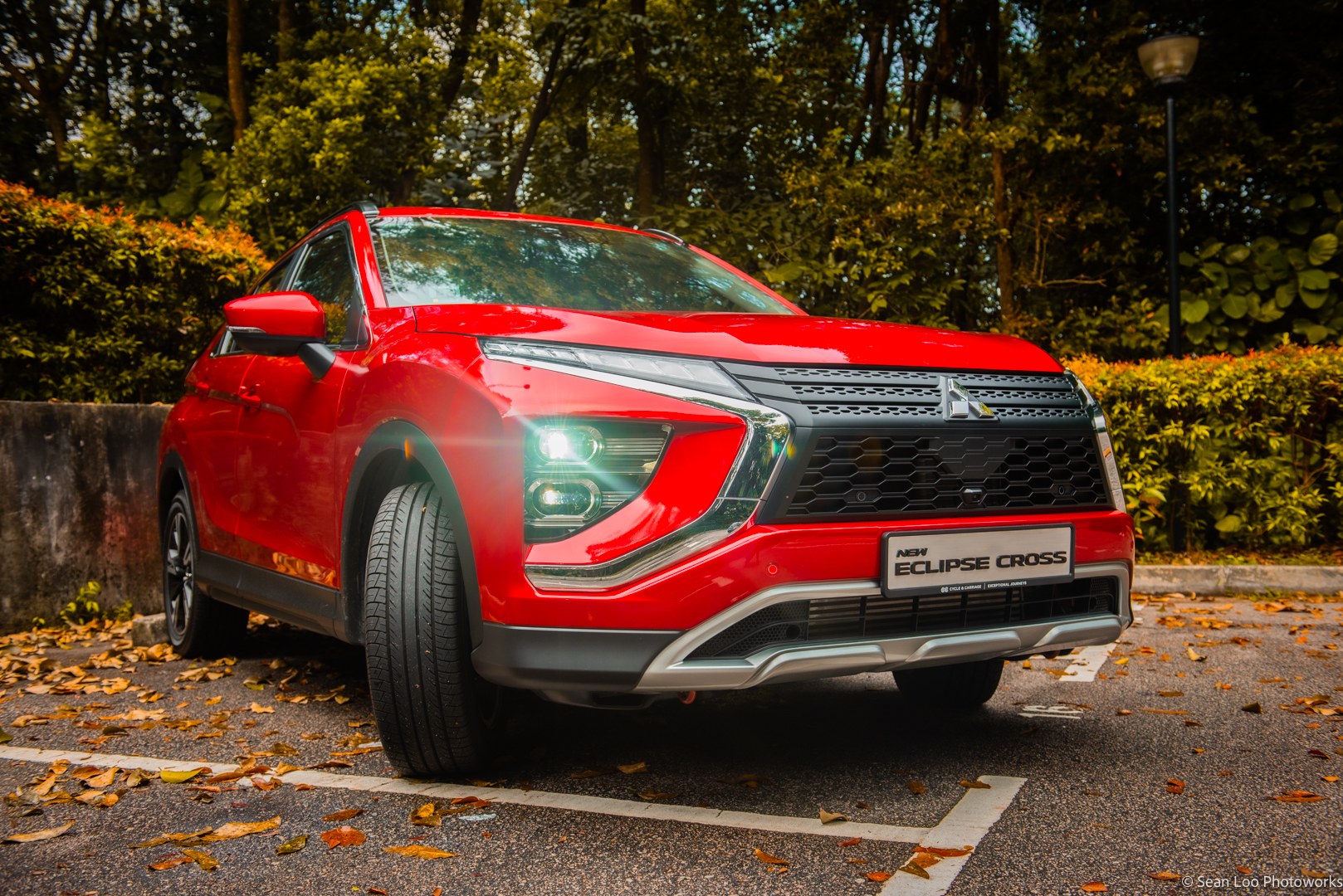 The Eclipse Cross receives its first major facelift since its launch back in 2018, with the marque refining two major areas - looks and technology.

The front end is sculpted to look more like the rest of the current Mitsubishi model range. Thin and sleek DRLs integrate with chrome bits outlining the new “Dynamic Shield” grille, accompanied by a large LED headlight cluster. 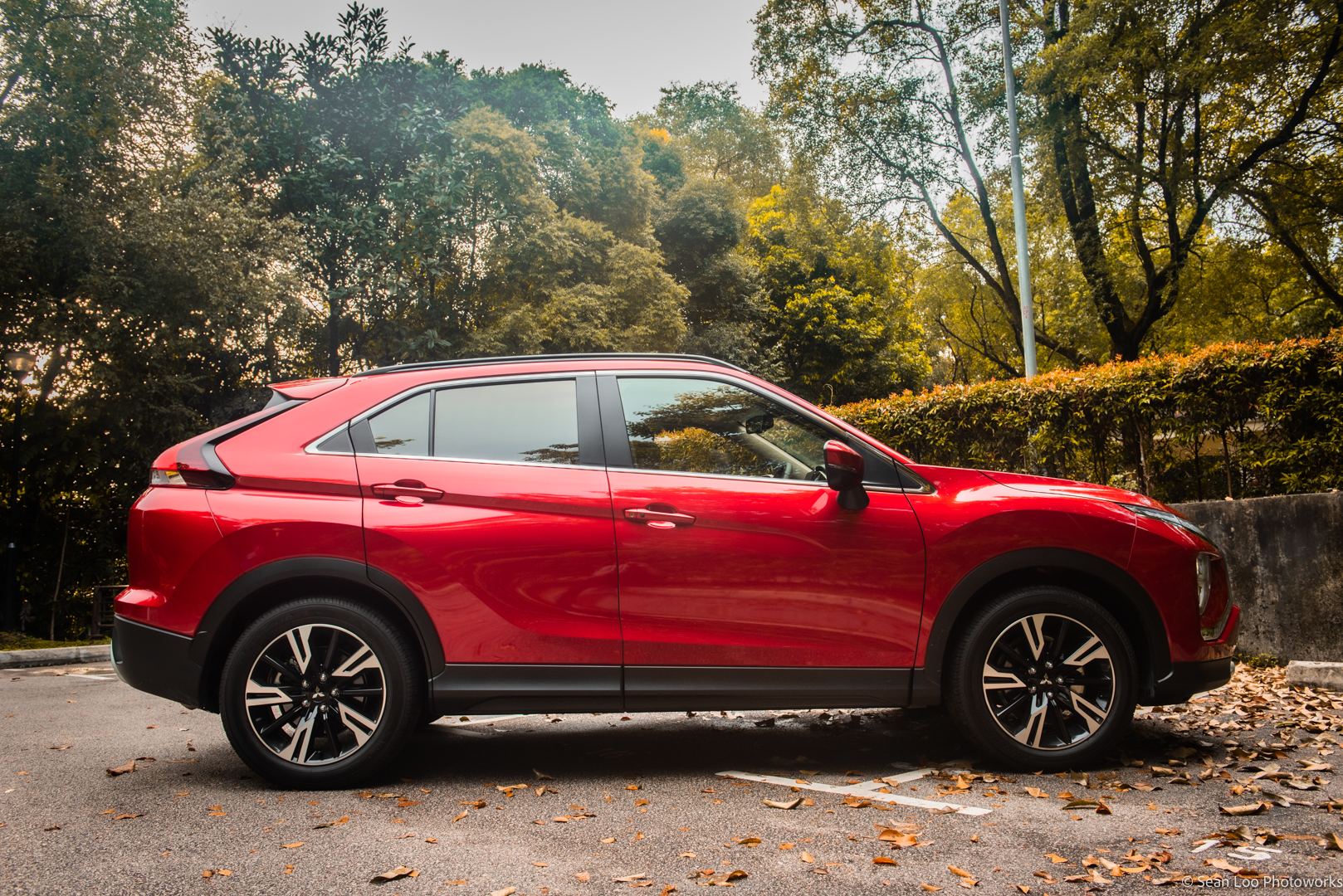 From the side, the Eclipse Cross also appears a bit more angular, with flowing lines giving the impression that it's constantly leaning forward.

Getting the higher-end Style trim level also grants you bigger 18-inch rims, as opposed to 16-inch rims you get on the Classic trim. This particular paint colour is aptly named “Red Diamond” too.... Coincidence? 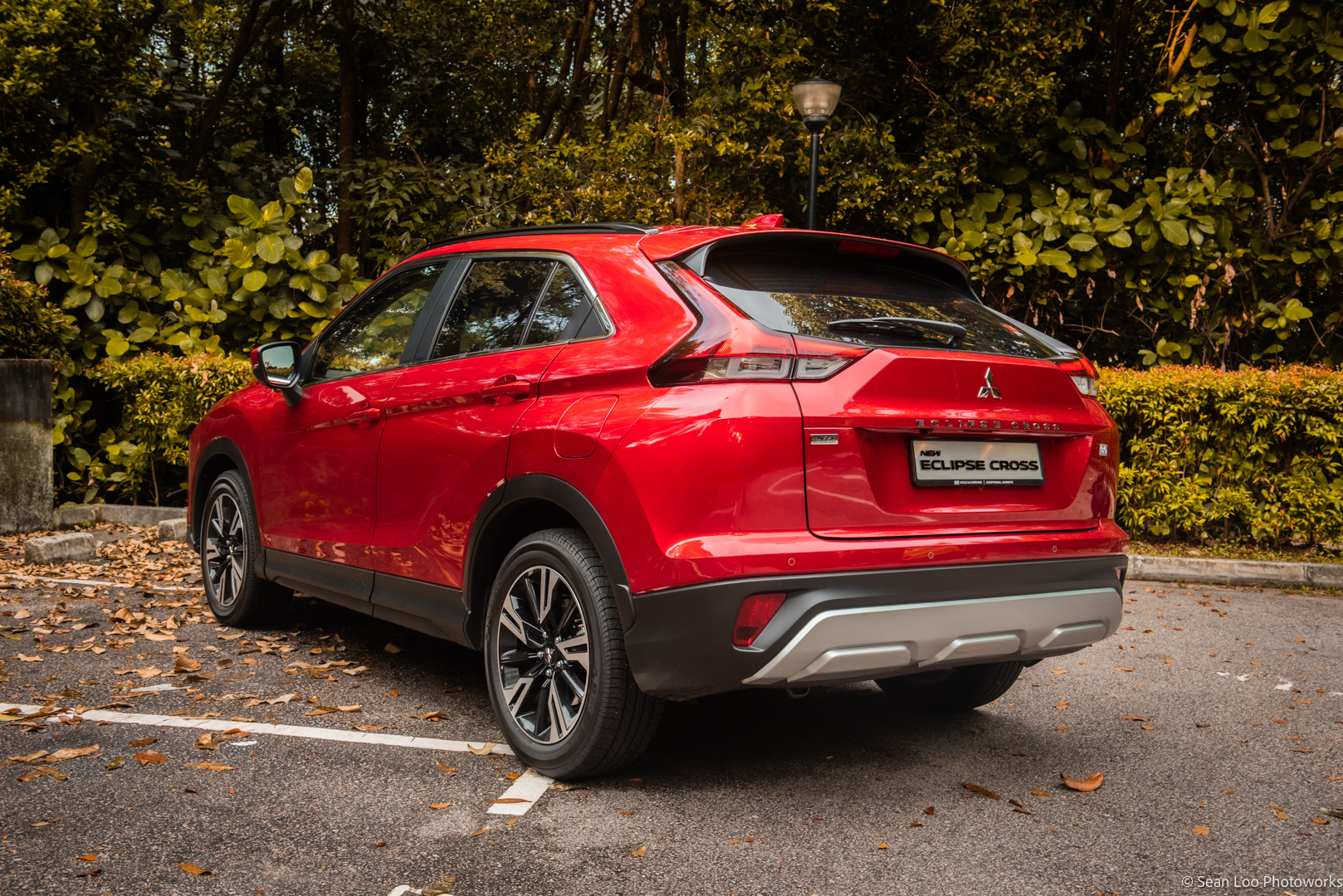 Arguably the most prominent visual change happens at the rear, with a new single-piece rear window and redesigned tailgate. Mitsubishi claims that this was adapted using feedback from existing Eclipse owners, with a strong majority stating that the original split tailgate limited rear visibility.

This new design also introduces more luggage space - 405 litres to be exact. Mounting points dotted on the inside enable items like cargo nets to be fastened down, and the rear seats can be folded down 60:40 should one require more room. It's worth noting also that regardless of trim, the Eclipse Cross does not come with a power tailgate. 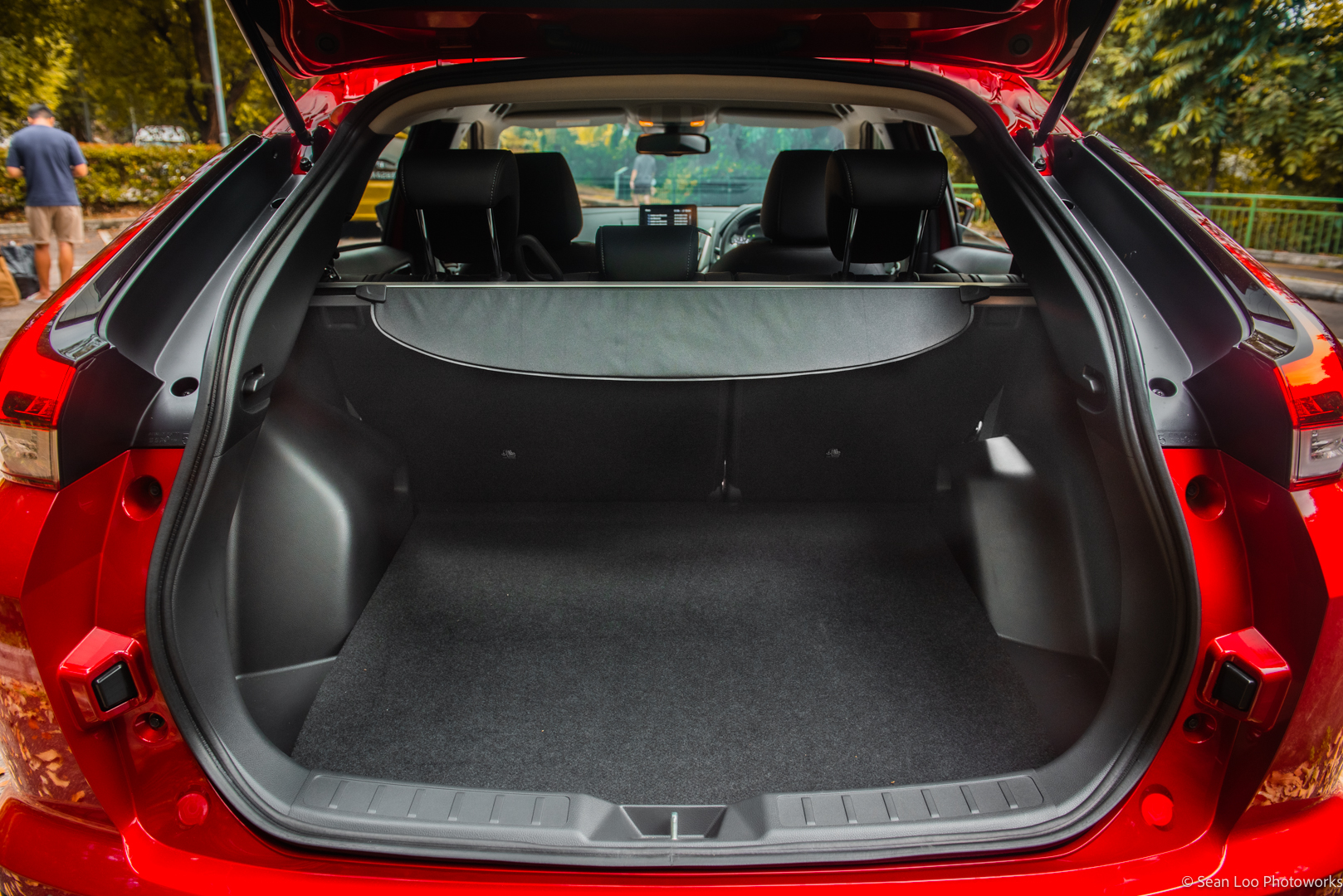 To be honest, we still fall under the camp of “we don't really like the look of this car”. When it first debuted in 2018, the look of the Eclipse Cross left a lot more to be desired. Head on, it still looks okay, but when you take in the rest of the body, the proportions seem… all wrong.

We are confident we were not the only one who were shocked back then. However, we respect Mitsubishi for trying, and actively listening to feedback from their customers. This facelifted variant does look a tad more stylish, even though the general body shape is still pretty similar. It’s a small step, but a step in the right direction nonetheless.

Once you dive deeper, you start to see where the Eclipse Cross really shines 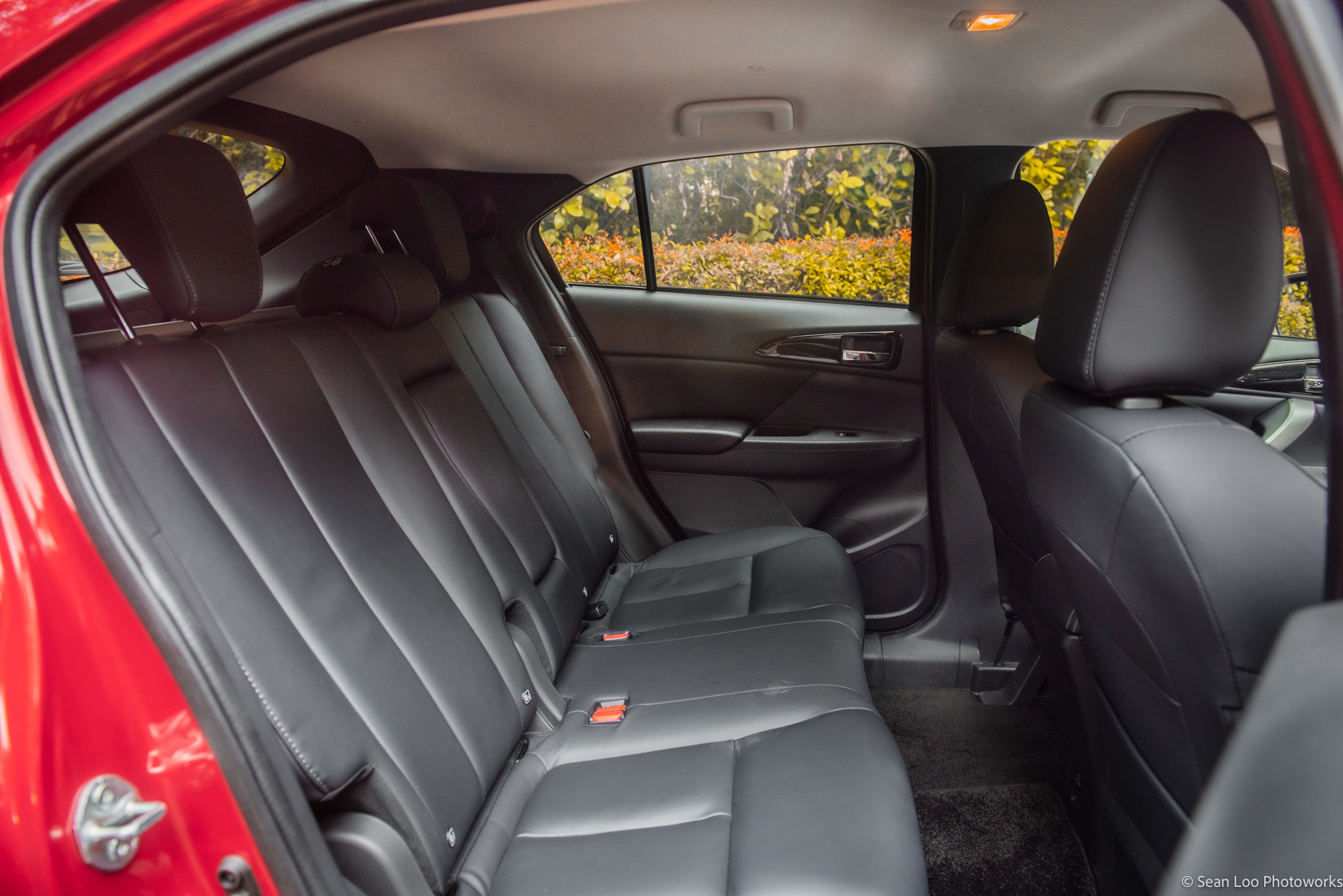 While the exterior is subjective to one’s personal tastes, the interior is nothing short of splendid. Rear passengers are treated to great legroom and headroom all round, and the rear seats can be adjusted to different angles for additional comfort.

It really is a nice place to be in, with the only downside being the lone 12V outlet in the centre console. Personally, USBs would have been a better pick, or even rear aircon vents. 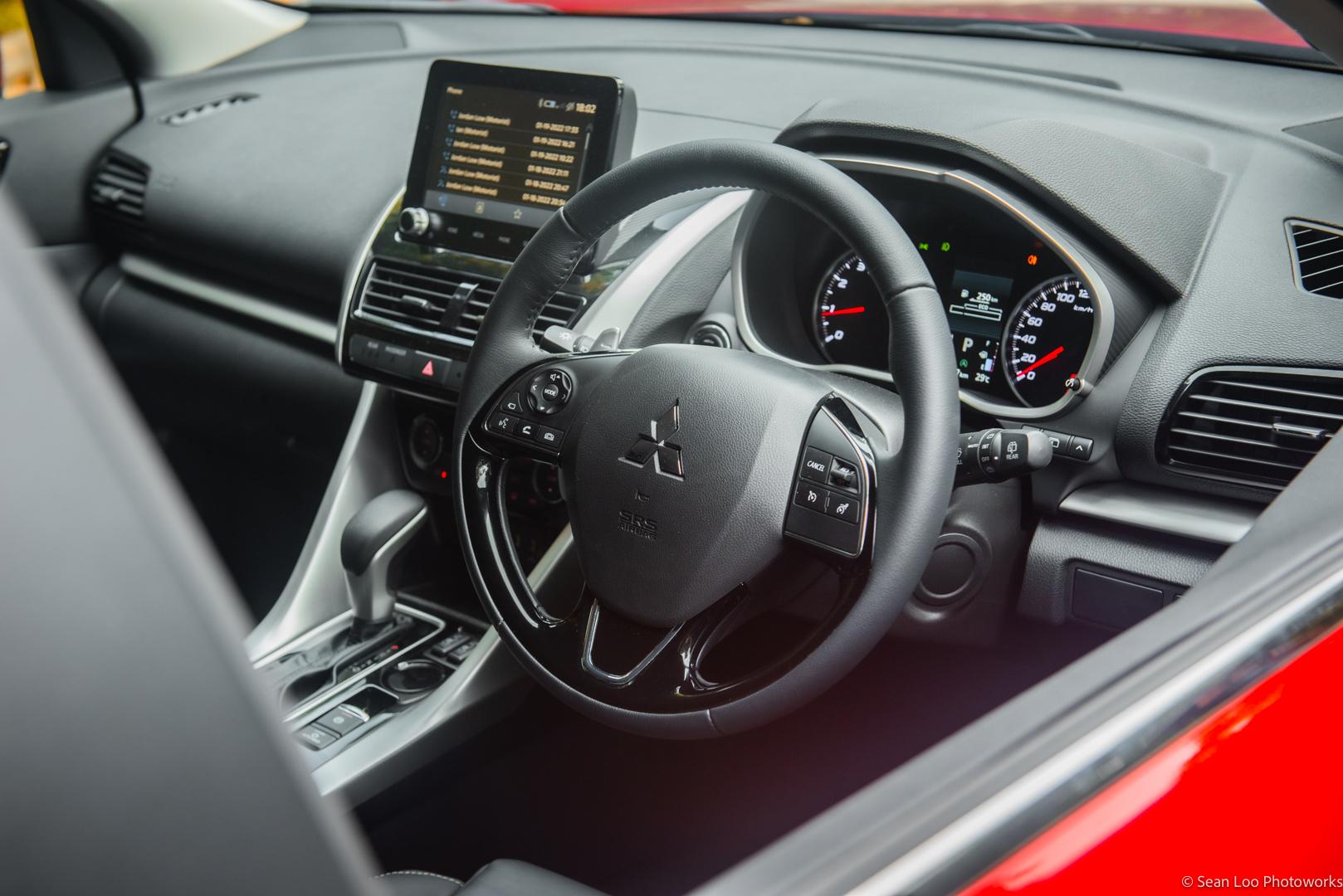 Customers who spring for the atas Style trim benefit from all round leather seats, additional paddle shifters and electric front seats.

The overall driving position feels really comfortable, and all touch points are nicely proportioned in the cabin. A departure from the current obsession with digital displays, the Eclipse Cross proudly rocks analog dials. 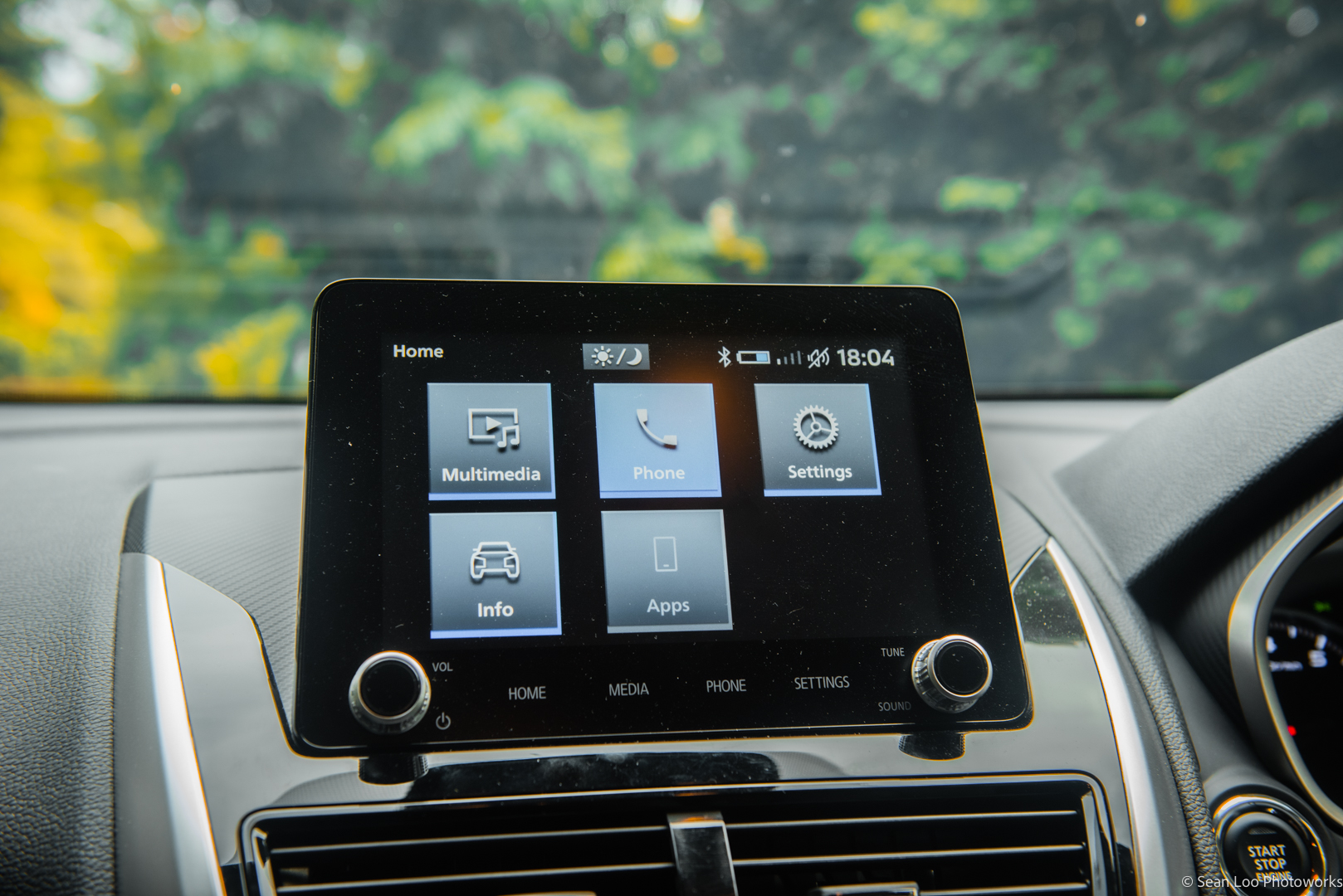 Another reason why you would be inclined to get the Style trim would be the inclusion of the bigger 8-inch Smartphone-link Display Audio (SDA) system, complete with Apple CarPlay & Android Auto. In testing, it is responsive and swift in connecting to our smartphone, and the physical volume controls are a reassuring sight.

One thing we would complement the Eclipse Cross for is its sound system. It isn’t some atas sound system like Bose or Harman Kardon, but it holds its own pretty well, providing a pleasant auditory experience. In fact, it does seem that Mitsubishi has nailed their native stereo system, as even their lower tier offerings pack a surprisingly decent auditory experience too! 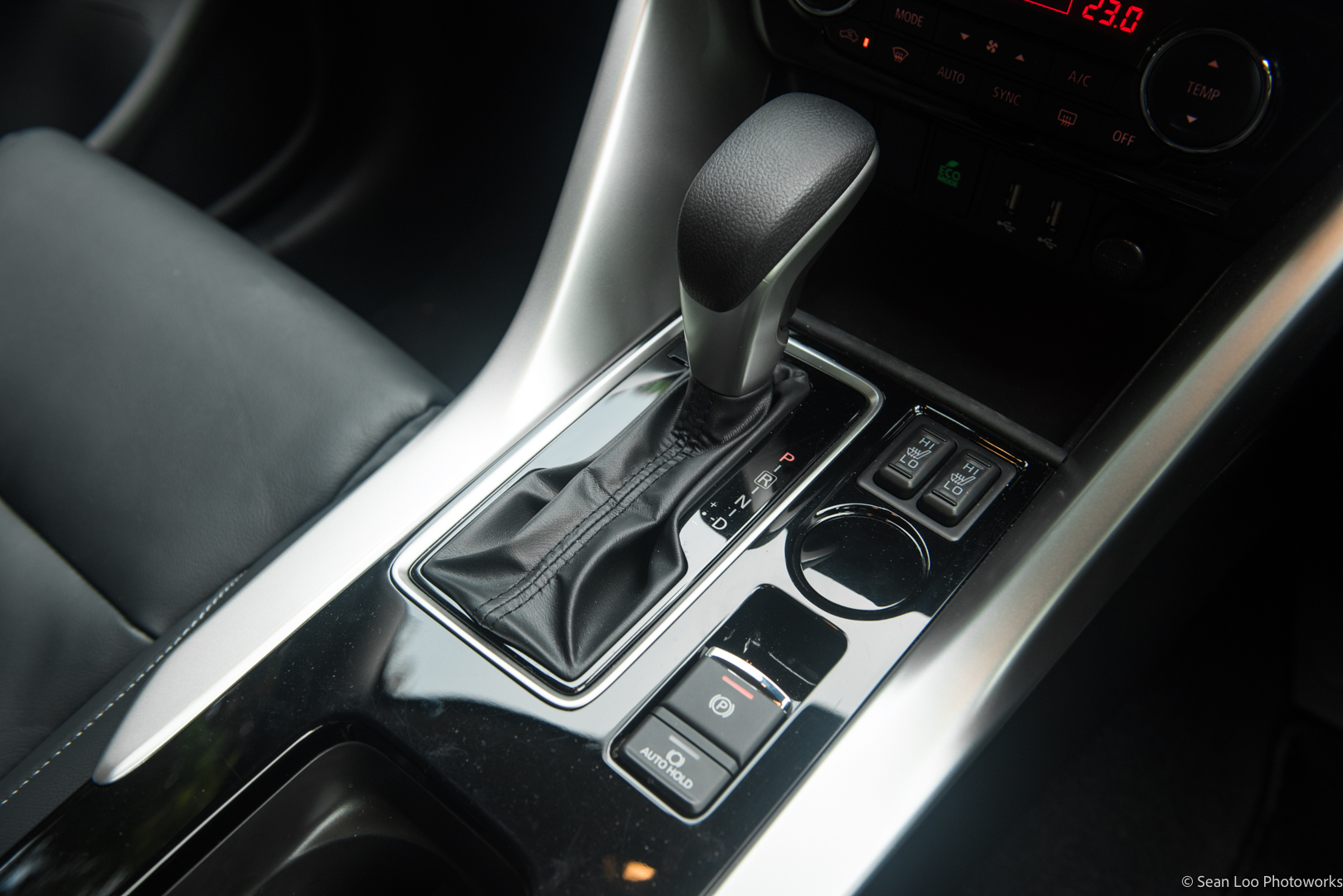 Front occupants are also treated to heated seats. No wireless charger is available in the Eclipse Cross, but you do get two USBs and a 12V outlet for charging utility.

All things considered, the interior is pretty impressive. It is impressively comfortable, and offers loads of space for both you and your passengers.

Nimble on the roads 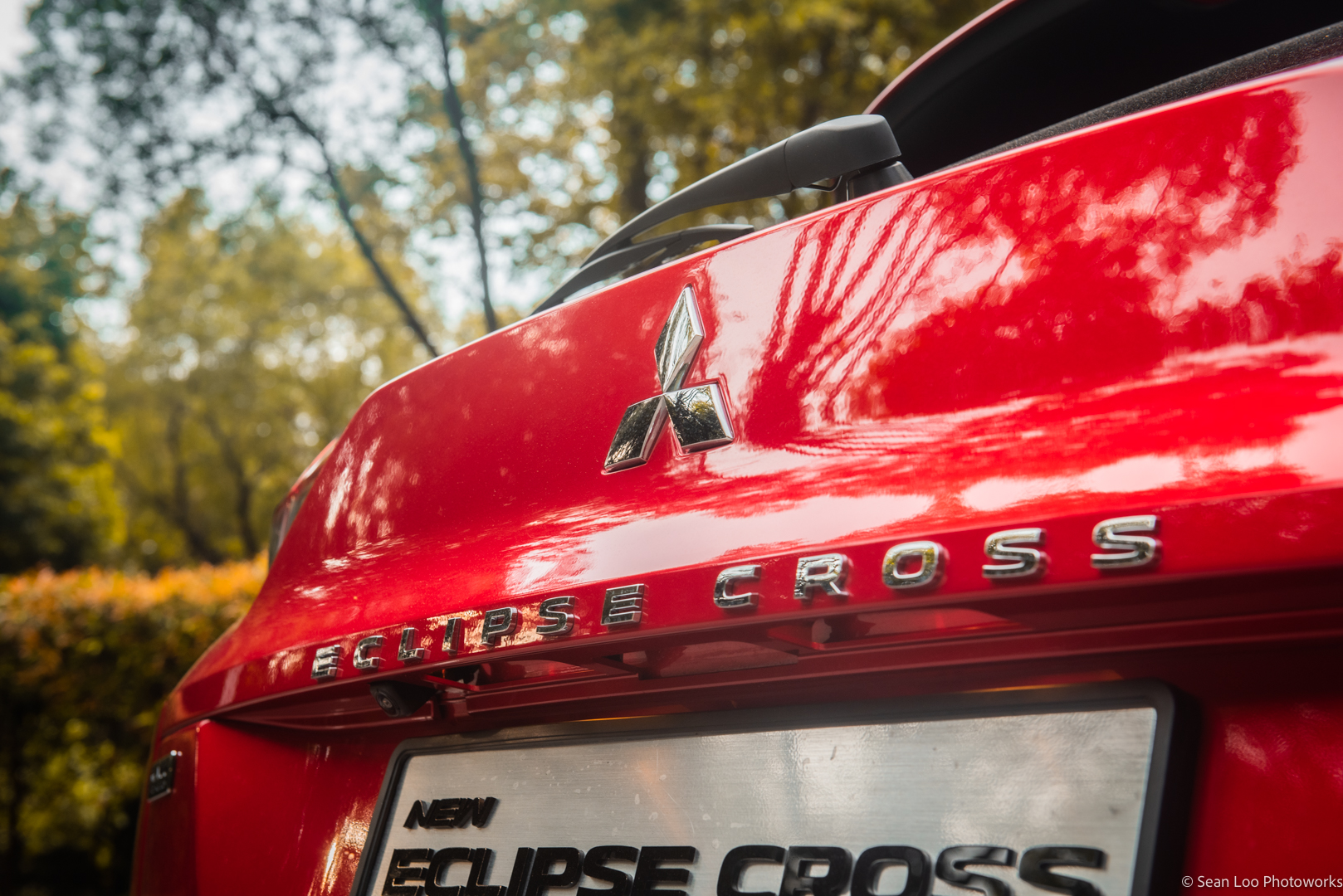 SUVs are traditionally bulky and harder to manoeuvre than other vehicles, but you don’t really get that in this. The steering is extremely light, with bumps and kinks in the roads dispatched with relative ease.

Visibility all round is good too, since you are situated in a tall and commanding position behind the wheel. The side mirrors are huge too, offering ample coverage for obscure blindspots. The single rear glass is much better than the old split design, offering great rear visibility so you can see clearly who is tailgating you.

Parking is a relatively smooth sailing affair as well, and the Style trim benefits from having both front and rear sensors. Mitsubishi terms this as a “Multi-around monitor”, which is basically fancy talk for a 360-ish camera. 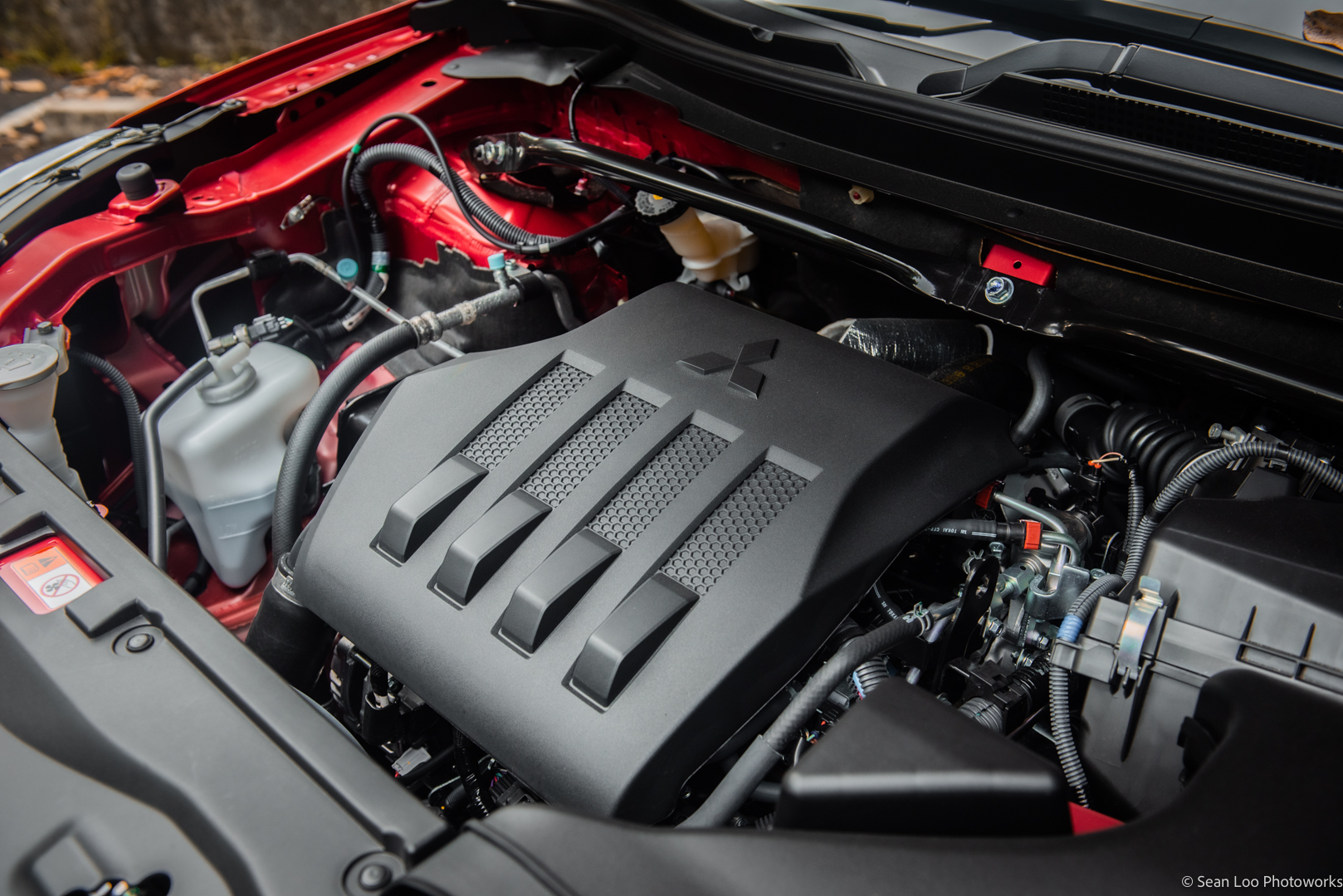 Power is decent in the Eclipse Cross, its inline 4-banger dishing out 163bhp and 250Nm of torque. There are technically different drive modes in the Eclipse Cross, but there isn’t a dedicated drive mode selector. ECO mode can be toggled using a button, and Sports Mode is engaged when you flick the gear shifter into manual mode. The "eight-speed" CVT is punchy at low speeds, allowing the car to complete the century sprint in 9.7 seconds. It’s not groundbreakingly fast, but can easily keep pace with traffic.

As every other manufacturer is moving towards hybrid-this and electric-that, Mitsubishi puts its foot down and says “Nope! We are sticking to traditional, dinosaur-juice fueled ICE engines”. While this doesn’t hurt the Eclipse Cross at all in terms of performance, it may impact sales, shunning away potential customers who are looking for more lowest-dollar-per-kilometre cost-effective options.

Fuel economy is decent at 14.5km/L, but there are lots of other similar models out there that can easily trump that.

Never judge a book by its cover 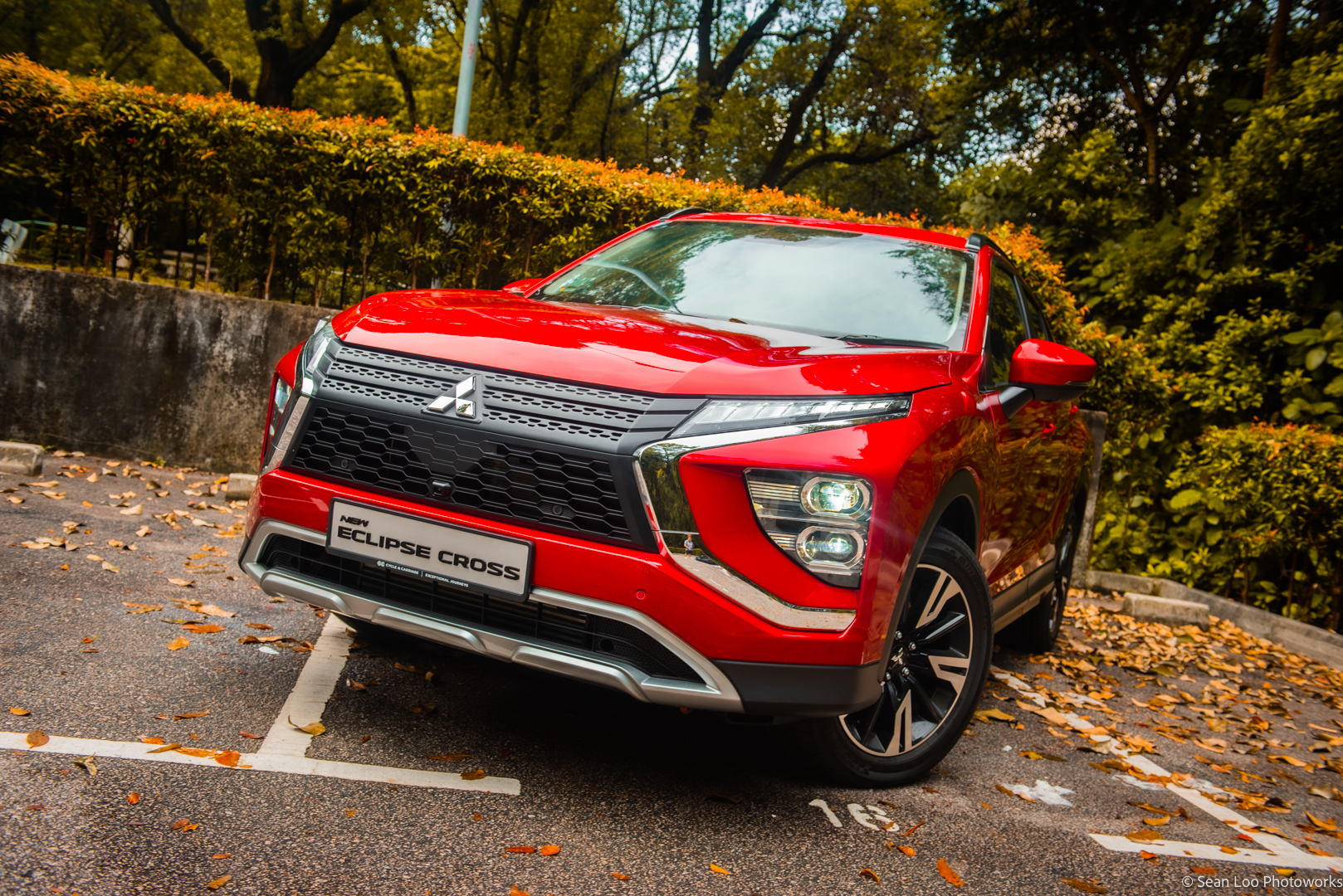 While the styling of the Eclipse Cross is debatable, I can’t deny that it is a practical and functional car offering plenty of versatility. Best of all, the price is actually pretty reasonable too. However, there is a crucial decision to be made here.

At the time of writing, the Classic trim stands at $134,000, while its more atas Style trim sits pretty at $146,000. That’s a noticeable difference between trim levels, so If you are keen on getting this, you may have to ask yourself if you really need all of those extra goodies. Or, save a good chunk of change, to the tune of $12,000.

To reiterate, we think it really is a decent contender in the hotly contested SUV arena, IF you can look past its exterior!