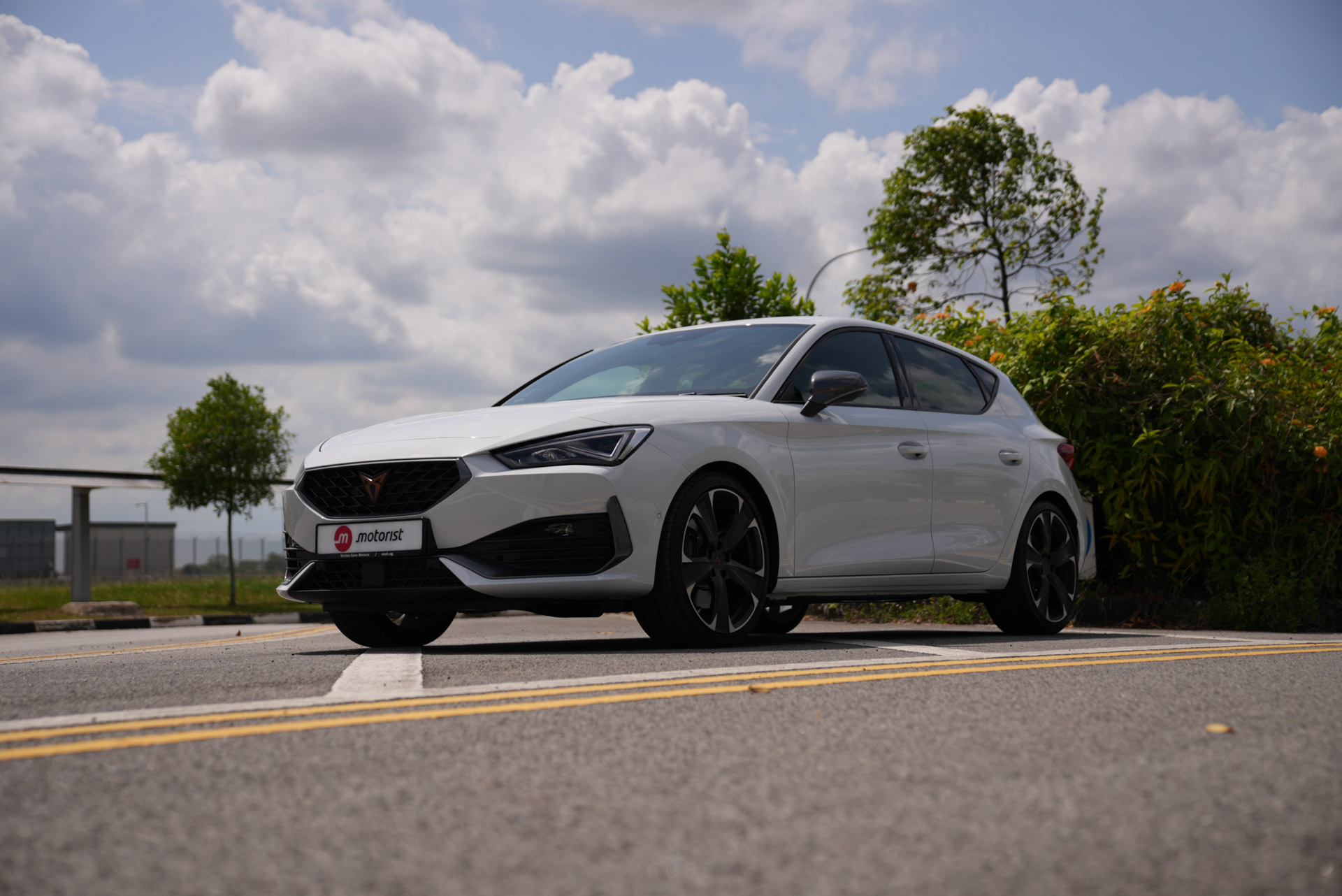 The CUPRA Leon is the latest in a long line of cars utilising Volkswagen's MQB Evo platform. But is it more than just a reskinned Golf? With more power, a lower price tag, and some Spanish flair...perhaps not.

When you buy a car, what are some of the factors you take into account? Perhaps you'd usually look at things like fuel economy or practicality, or maybe whether or not your ageing relatives can climb in easily. But when you're in the market for a hot hatch, suddenly those criterion change.

Now, you're looking for how much fun you can have in it and whether or not it puts a smile on your face when you drive. In that regard, just how does the CUPRA Leon square up on the hot hatch scale? 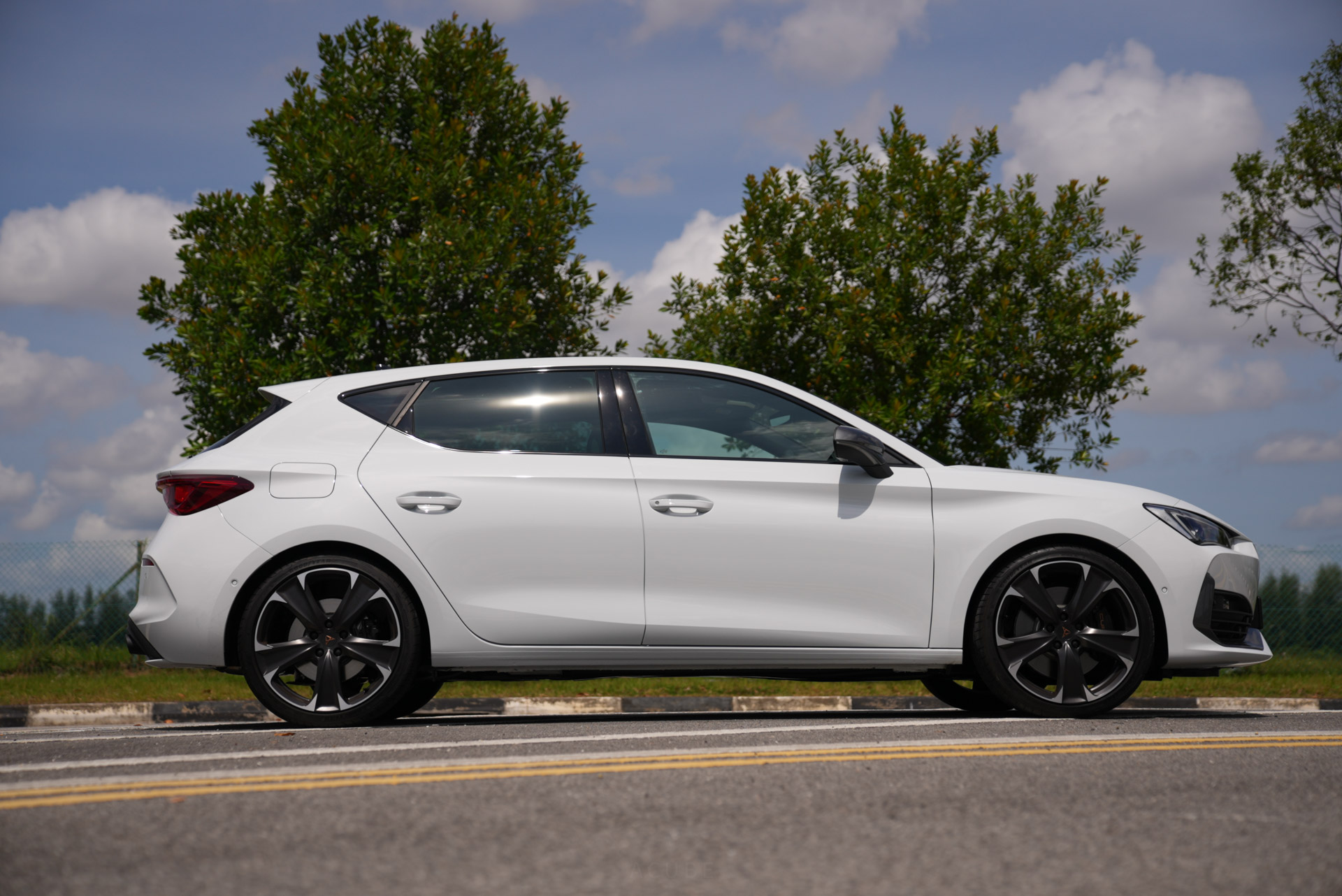 We'll start with the looks. The CUPRA Leon gets a new, more aggressive CUPRA body kit to signify that this is the souped-up version of the standard Leon. As part of that, you get 19" diamond-cut alloy rims, CUPRA branded brakes, a rear decklid spoiler, a rear diffuser, a more aerodynamically-styled front fascia, and quad (functional btw) tailpipes. 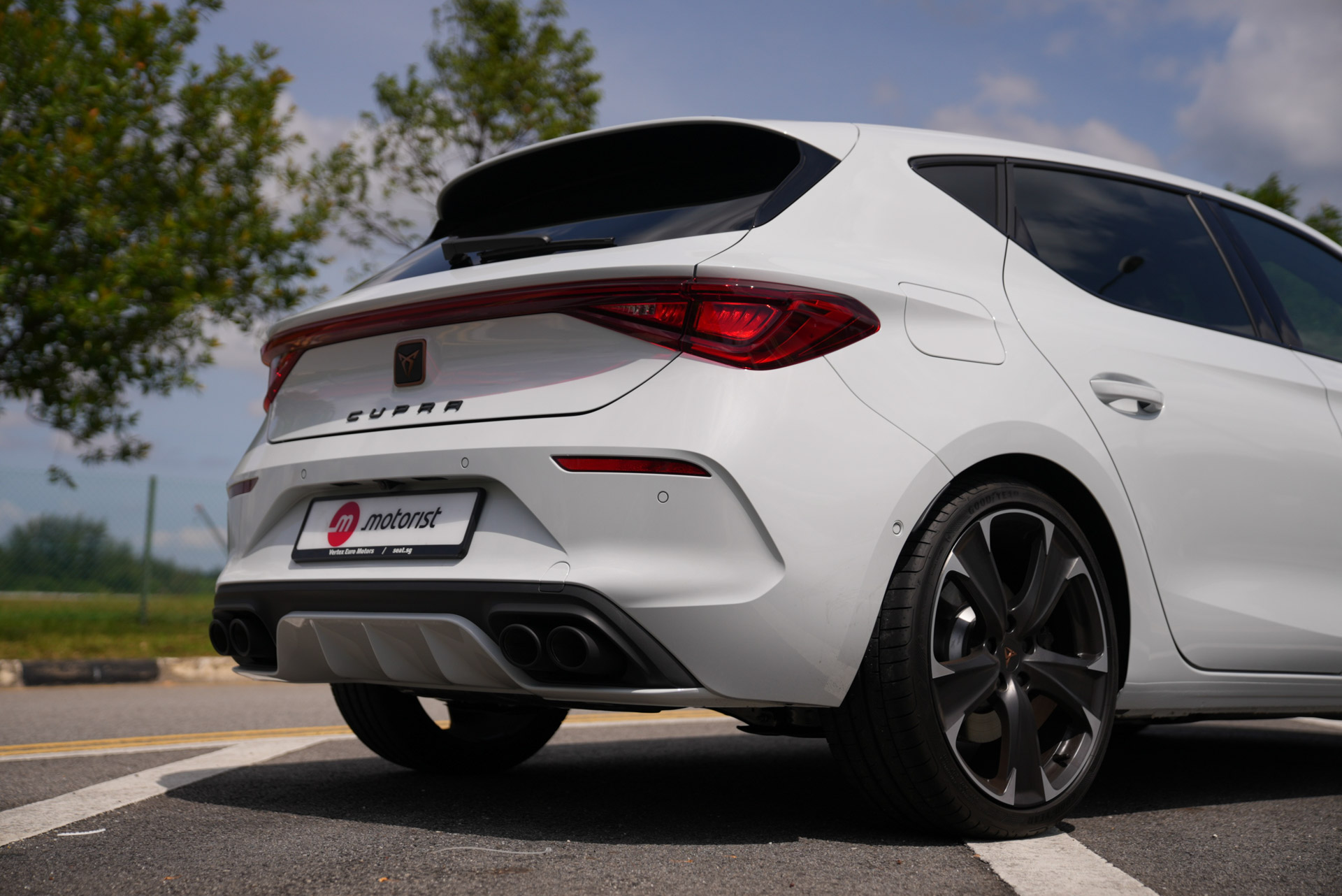 The Leon also features full LED lighting front and aft with the rear also getting a full width LED light bar. While the standard Leon looks a little meek, the CUPRA Leon doesn't suffer from the same issue, with all those added bits coming together to make the car look as a hot hatch should, that being lively, with a hint of boy-racer. 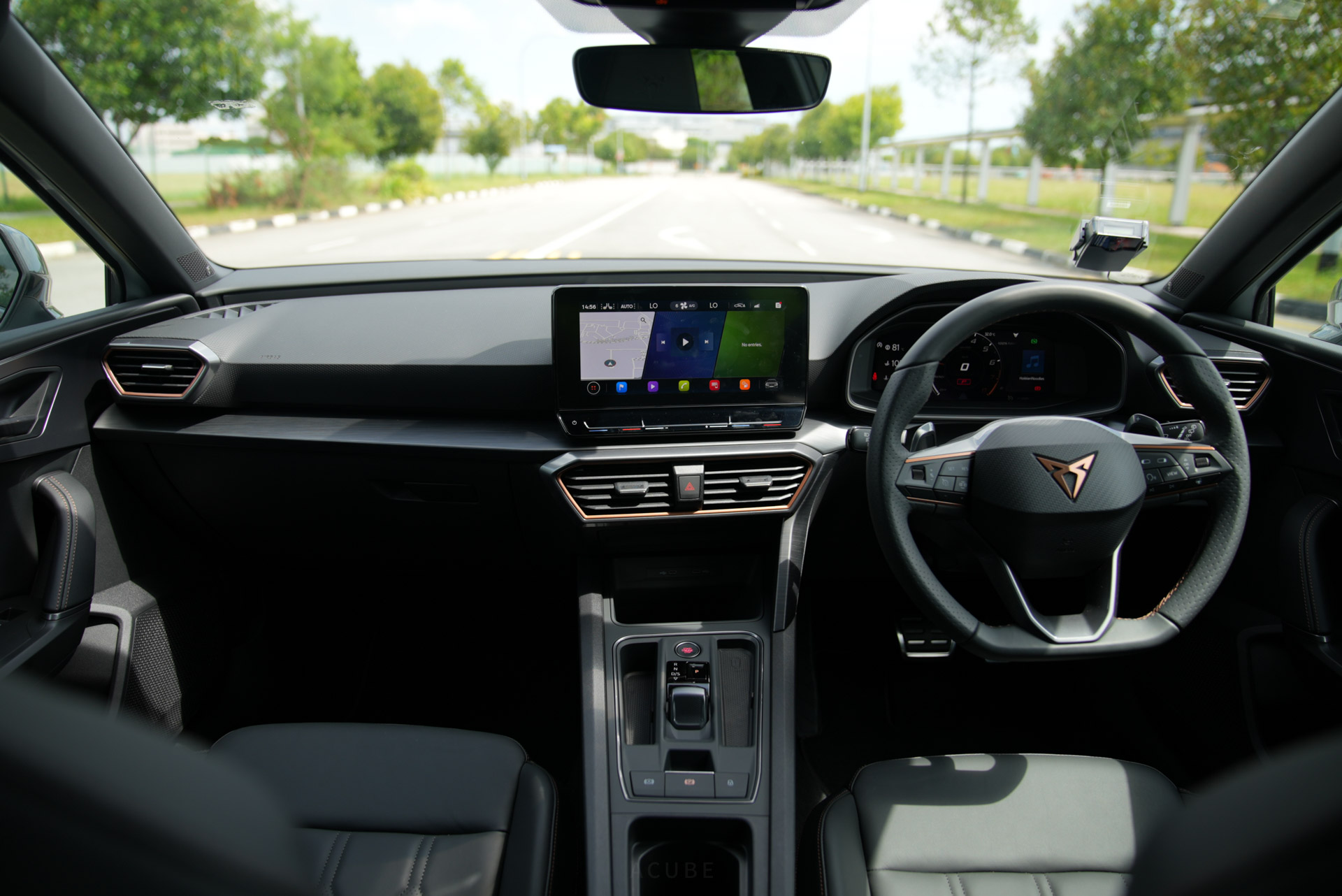 On the inside though, Cupra's decision to not include any buttons in the centre console can make it difficult to toggle through the various sub-menus for even the most basic of car functions. The Leon's 10" infotainment system also doesn't feature a permanent spot its UI for the more frequently used options, such as fan speed or air direction.

Perhaps quick-access shortcuts can be incorporated into the UI of the infotainment screens. Otherwise, physical buttons will make the experience behind the wheel much better. That being said, as SEAT/Cupra uses bits from the Volkswagen-Audi Group, these issues are not unique to the former. You'd find a similar, button-less system in a smattering of other VAG Group offerings too. 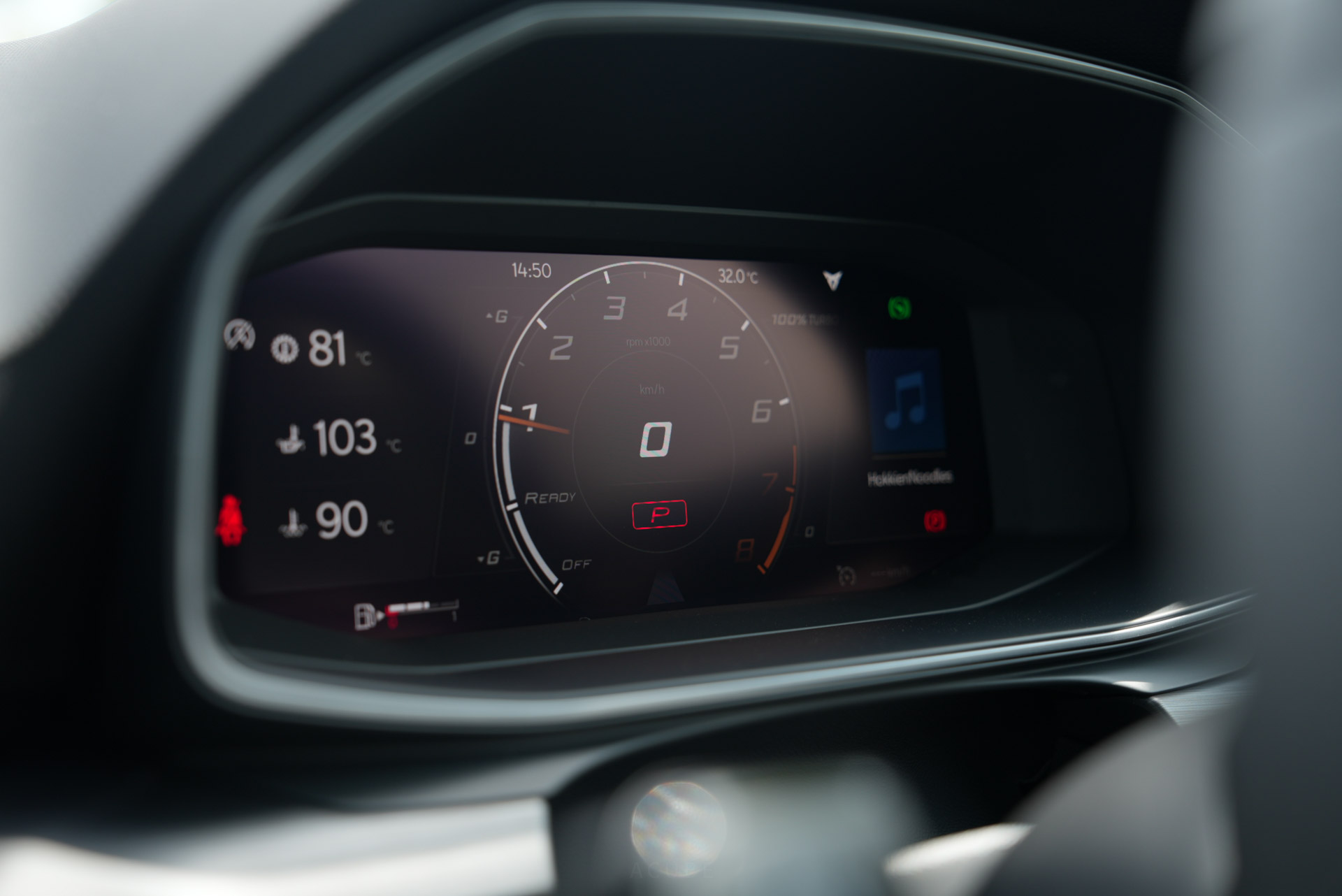 Aside from the infuriating button layout, the rest of the interior is actually very decent. For one, the Leon gets the full 10.2" digital cockpit gauge cluster we've come to know and love from VAG products and it's every bit as good here as in any VAG product. It's brilliantly designed and extremely customisable and that will always be a plus point in my books.

The rest of the centre infotainment screen also works well and has wireless Apple CarPlay and Android Auto that can pipe your music through the BEATS Premium sound system the car comes with. There's also wraparound ambient lighting with the sides doubling up as the blind spot warning light which is very well incorporated. 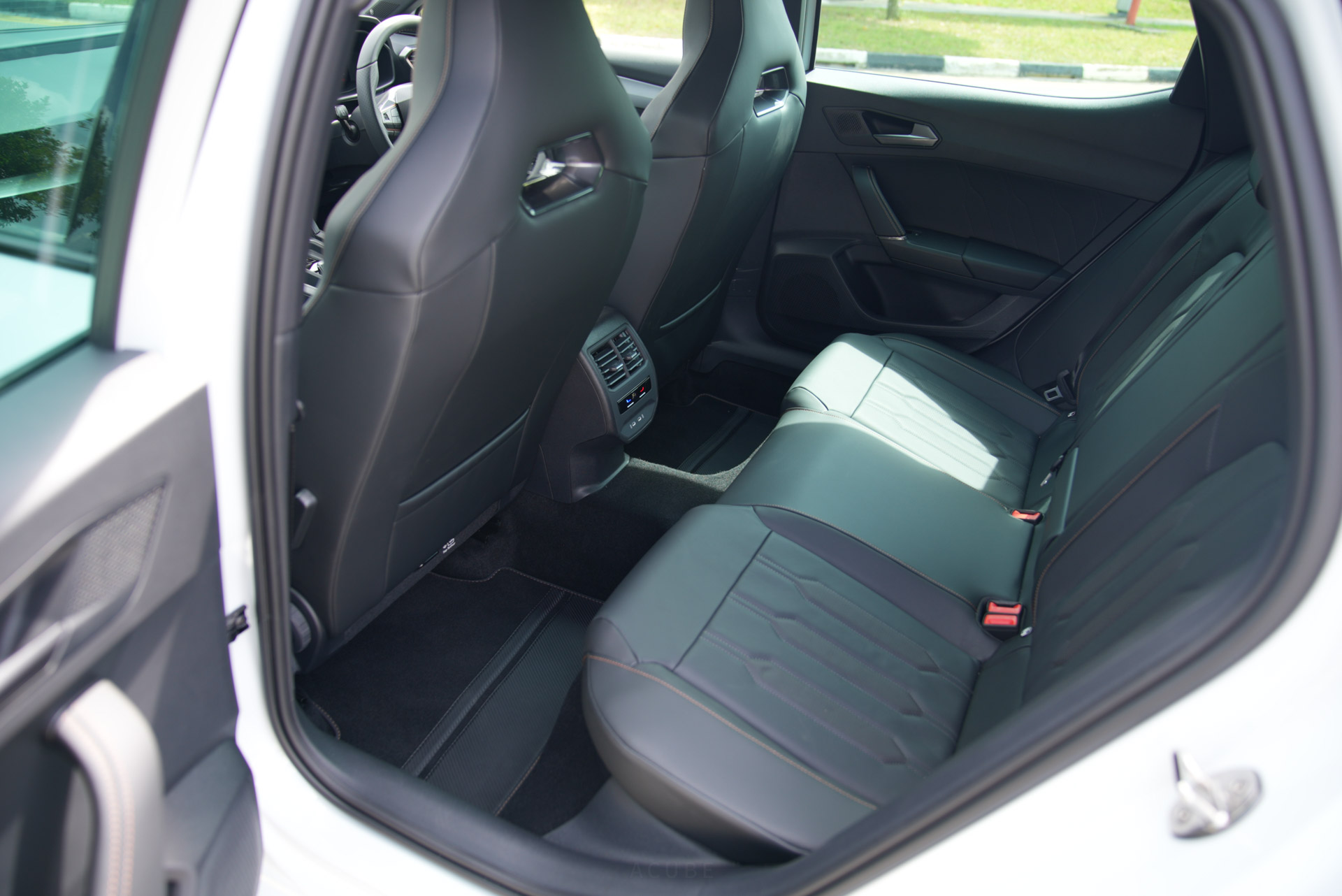 Additionally, while only the driver gets electric memory seats, both front seats are still heated. Speaking of the seats, the sports seats found in the CUPRA Leon are snug and well-formed to hold you in when making hard turns. The seats in the back are surprisingly spacious with ample knee and head room even for taller passengers. Both front and rear occupants also get USB Type-C charging ports and the centre console has a wireless charging pad as well. 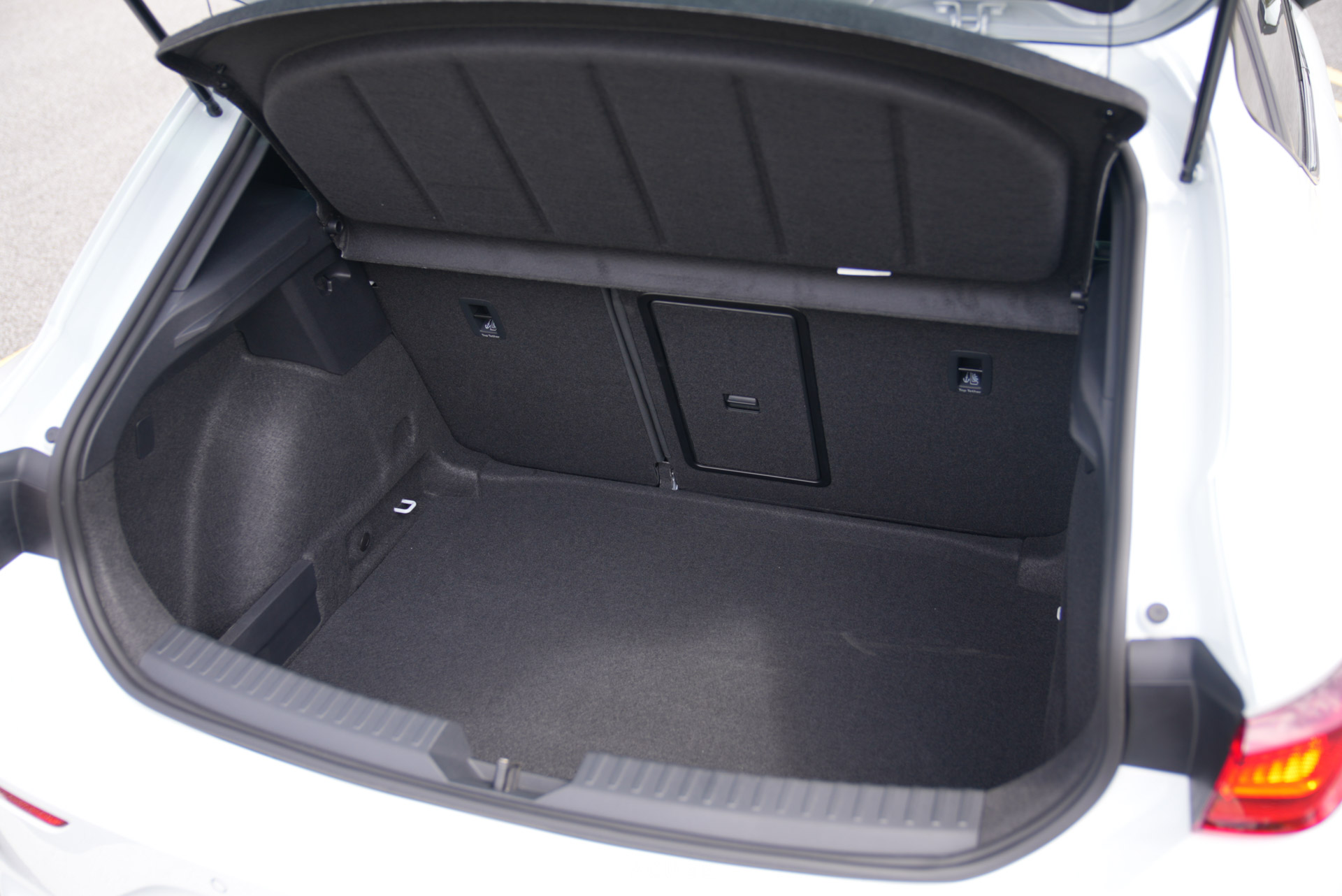 The CUPRA Leon is also more practical than you might think. It has 380L of boot capacity in its standard configuration but can be expanded by folding down the 60:40 rear seats or lowering the ski hatch in between the rear seats. There are also massive door bins for both the front and rear passengers that can easily fit large water bottles. 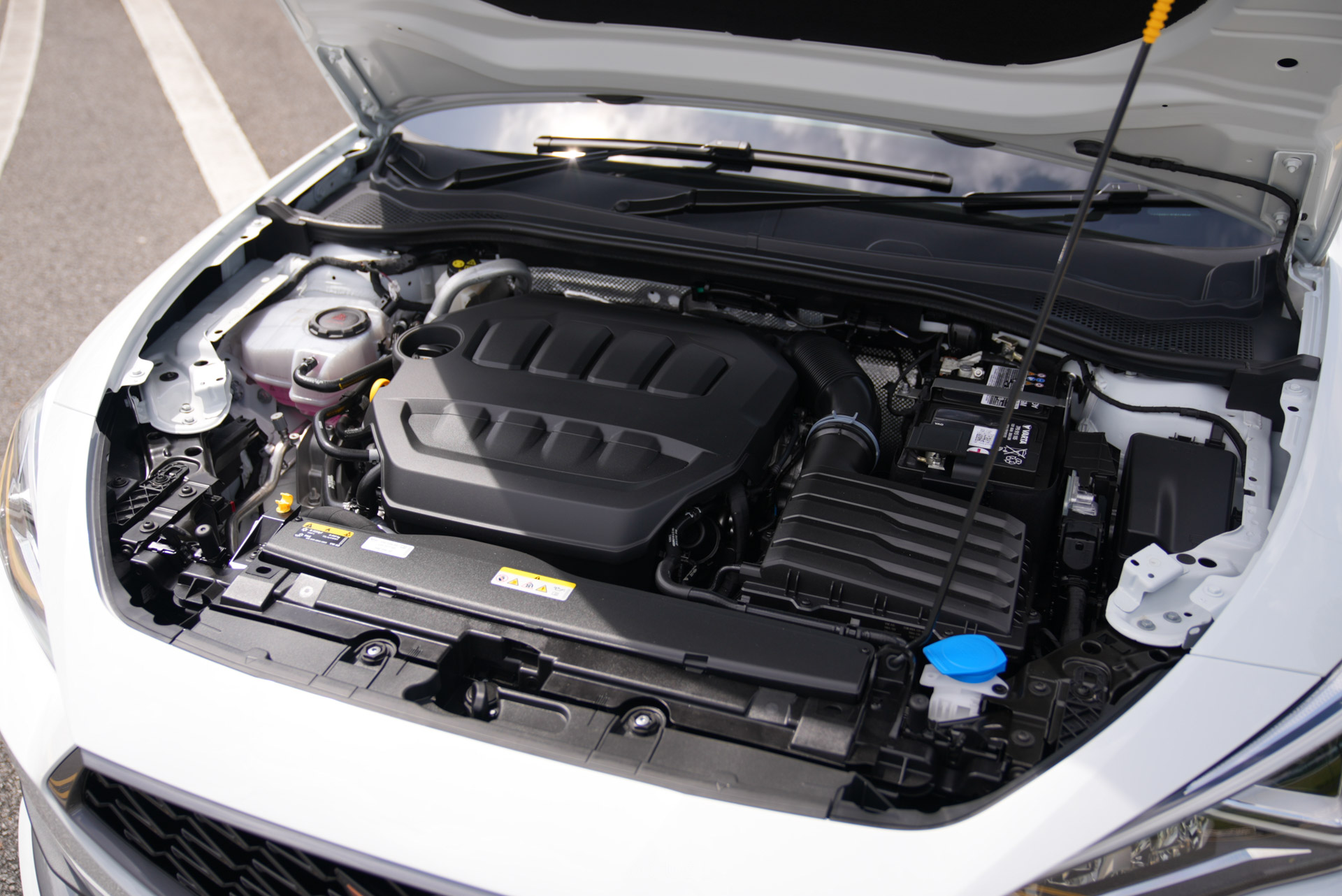 Now on to the most important bit of the CUPRA Leon, or indeed any hot hatch. How does it drive? And the short answer is, very very well. Here are the headline figures: 300hp, 400Nm of torque, 0-100km/h in 5.7s, and a top speed of 250km/h. All made possible through the world-famous-at-this-point EA888 two-litre four-cylinder turbocharged engine.

Found in everything from the Audi S3 to the Golf R, this engine and seven-speed DSG gearbox combo is tested and proven to work and provide loads of oomph so it's not at all surprising to learn that the CUPRA Leon goes like a scalded rat. 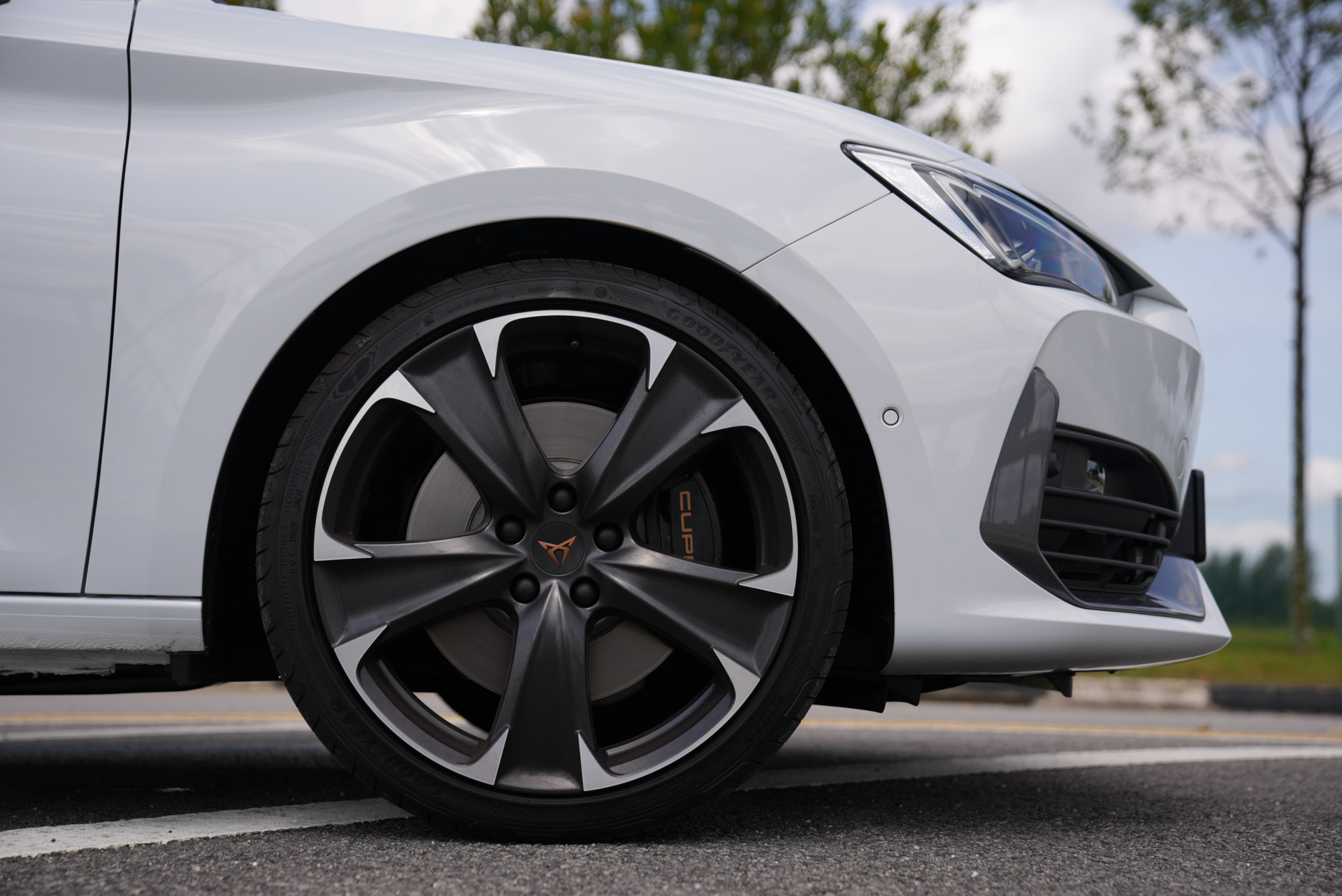 Launching the Leon from a dig always results in a heap of wheelspin as the front wheels struggle to find enough traction to contain all that grunt, but once it hooks up, strap in because you're just gonna be riding a wave of torque all the way to your destination. The engine sounds good but I'm afraid it's mostly piped in through the speakers which can sound a little strange because the audio levelling for the exhaust noise is quite inconsistent.

That being said, after longer drives in CUPRA mode, the exhaust does start popping and crackling which quickly becomes a schoolboy's game of making it pop and then chuckling to yourself. 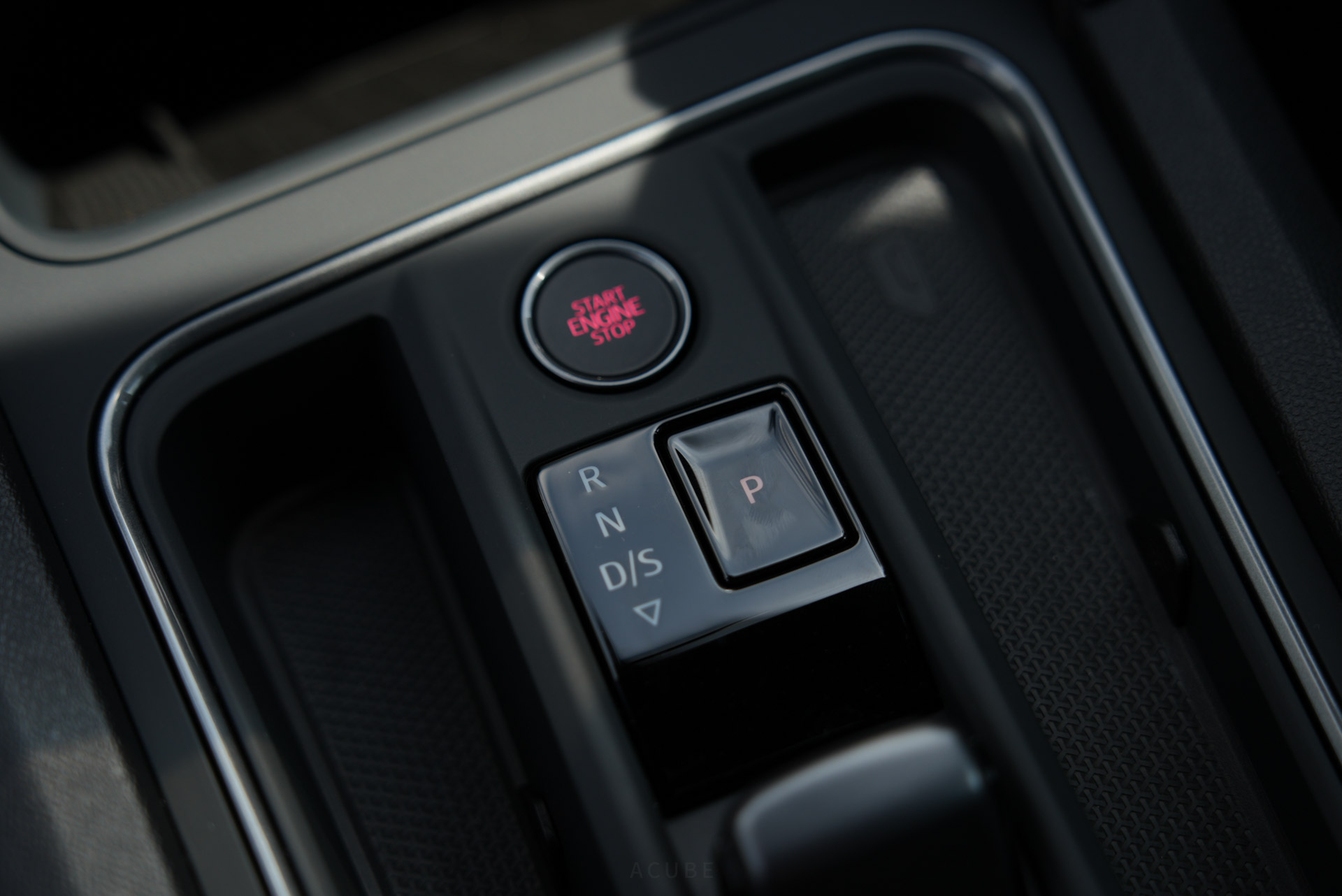 CUPRA mode is one of the four driving modes available, the other three being Comfort, Sport, and Individual. In Individual, you can customise all your car's dynamic settings independently with the adaptive dampers, in particular, having 15(!) different levels of adjustment. Our personal driving mode of choice was Individual with everything set to CUPRA except the suspension which is set to its softest setting.

This configuration provided more immediacy in power delivery, more exhaust noise, and weightier steering while still being pliable and cushy enough on the public roads. 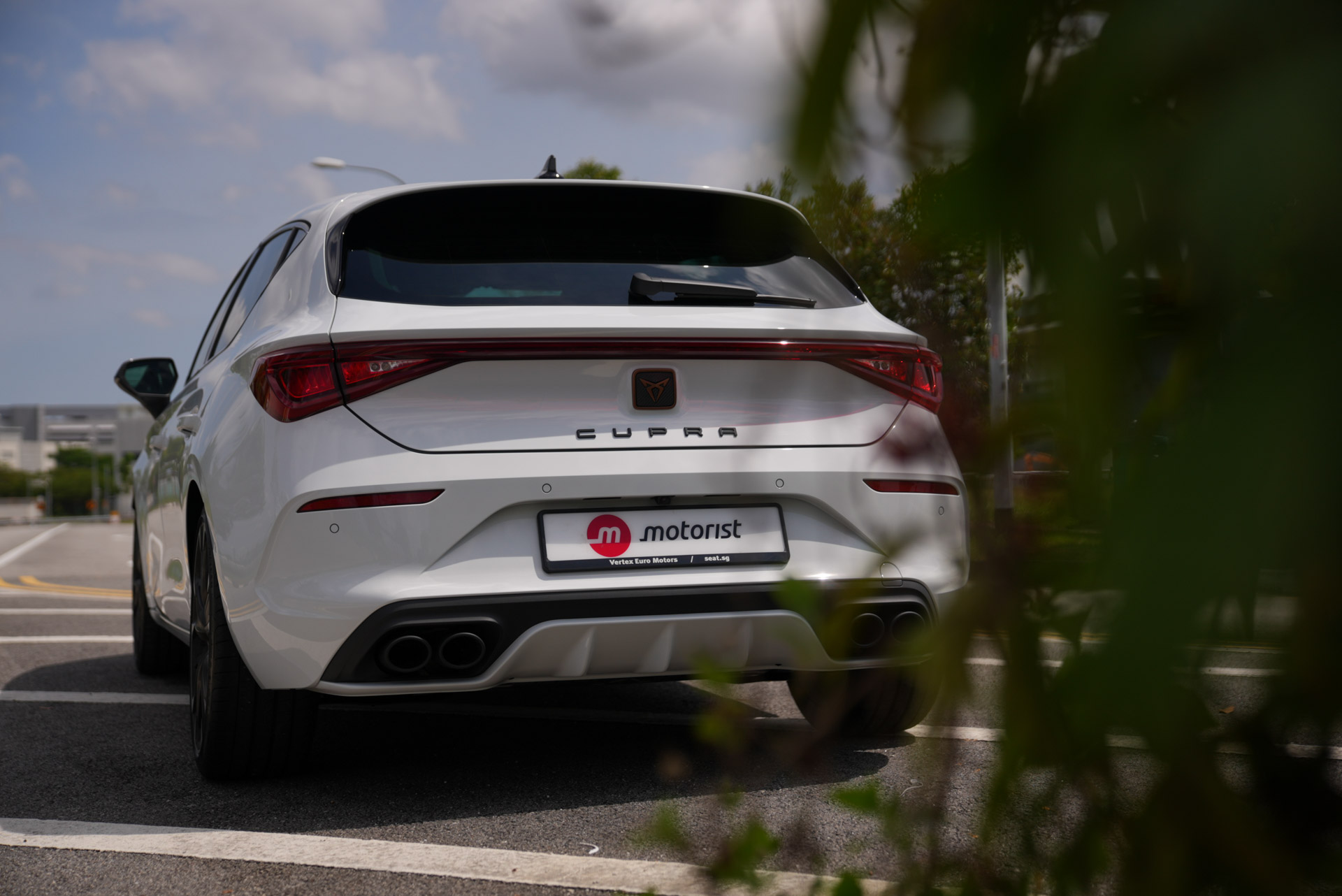 When you do want to get busy though, CUPRA mode is the mode for you. Everything stiffens and sharpens up and you just get the sense that the car wants you to play with it like it's egging you on. And playful the car is; the steering may be light, but it is direct and responsive.

It has loads of front end grip, allowing you to huck the car into corners with confidence and precision. The brakes are easy to modulate with plenty of stopping power too. The CUPRA Leon's differential is not as magical as in some other cars with some torque steer detectable under hard acceleration, but from mid-corner to corner exit, you can still feel the differential working to pull you out of the bend without issue.

And when you're done driving like a loon and you want to catch a breath, don't worry because the CUPRA Leon has auto parking and can park for you. Admittedly this isn't the best implementation of it, I suspect because of the lack of a 360˚ camera, other cars in their line-up like the CUPRA Formentor or even the SEAT Arona did it better, but it works well enough as a party trick or if you're feeling really lazy.

The CUPRA Leon is an interesting proposition because, at S$237,499, it's only about $500 more expensive than the Golf GTI but has almost 60hp more than the VW and personally I prefer how the Leon looks. It also drives like how a hot hatch should, lairy but not scary. Add to that the good-enough practicality and suddenly you're spoilt for choice in the hot hatch market.

At the end of the day, I'll leave the decision making to you but I know which one I'd pick.

Try out the CUPRA Leon for yourself here!