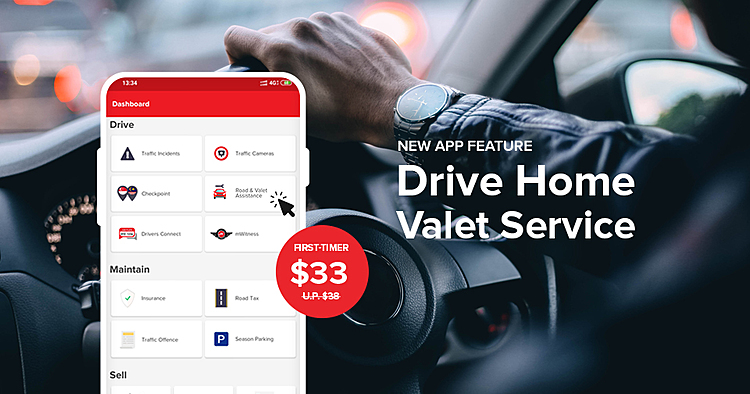 This comes on the back of a collaboration with Express Valet Concierge, a premium valet service provider. Through this collaboration, Motorist aims to promote road safety, and encourage the use of valet services to reduce drink-driving accidents in Singapore.

“Although the penalties for drink-driving have become stiffer, the number of drink-driving accidents have actually increased over the years,” said Damian Sia, CEO and Founder of Motorist. “As part of our broader goal to create safer roads, we’re confident that with the launch of our Drive Home Valet Service, drivers will no longer have an excuse to not call a valet if they have been out drinking.”

To encourage early adoption of the feature, Motorist and Express Valet Concierge will be offering first-time customers a $5 discount through various promotional campaigns. Motorist will also be working with several entertainment and drinking establishments to encourage the use of its valet service.

“By partnering with Express Valet Concierge, we hope to simplify the process of requesting for a valet,” added Damian. “Additionally, with this added feature, we hope to extend our reach and provide greater convenience to our customers locally.”

Besides using the valet service to send drivers home after a night of drinks, drivers can also hire valets for day-time services. For example, drivers can request for valets to deliver their cars to workshops and their loved ones or send them to and fro the airport.

“By becoming Motorist’s preferred valet service provider, it allows us to tap into the simplicity of the Motorist App to better meet the needs of our customers,” said a spokesperson from Express Valet Concierge. “We hope to provide a hassle-free experience for customers by allowing them to request for a valet, anytime and anywhere.”

In January 2019, the company successfully raised its first angel round from JobsCentral’s co-founders Der Shing Lim and Shao-Ning Huang, and Zopim’s co-founder Royston Tay. The funds will be used to expand the company’s operations in Thailand. Motorist currently has offices in Singapore, Malaysia, and Vietnam.